Early-season archery hunting for Midwest whitetails is a great time of year to ambush a big buck while he’s still on his summer routine. Food is still the primary driver of deer activity, and a well-placed stand can mean velvet tines walking past during daylight hours.

Disclaimer: I haven’t hunted with the Sitka ESW system. But I tried it out under somewhat extreme conditions to see how the breathability and durability held up.

The best way I could think to test the system was to hang my early-season meat-doe tree stand on an August afternoon in Kansas. It was a beautiful 94 degrees out, with 95 percent humidity.

The system has four main components: a shirt, pants, a hat, and gloves. The Sitka ESW system is quiet and lightweight, meant to give the early-season whitetail hunter comfort in higher early-season temps. And the odor control technology is a great finishing touch to keep your scent as low as possible for wary whitetails.

I’ll start with the shirt. I feel this is the strongest piece in the Sitka ESW lineup. The first thing I noticed is the weight of the fabric. The stretch polyester shirt is super lightweight and breathes phenomenally well.

I layered it over an extremely lightweight synthetic tee to help wick sweat. But the ESW shirt didn’t need the extra layer. During high activity in extremely hot and humid conditions, it shuttled away moisture well. 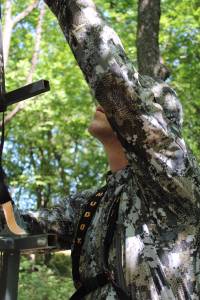 Sitka kept the early-season hunter in mind with this shirt design. A tighter and higher collar prevents bugs from flying in and out. The mesh is strategically placed to help dump heat around the armpits and increase airflow.

Buttons rather than a zipper add an interesting design choice. But, long-term, I would expect the buttons to last longer than a zipper. Especially when attached to the ESW foundational lightweight stretch polyester material.

The fit is tight, but not constricted. Your sleeves stay out of the way during the draw cycle and stretch well while ascending your climbing sticks to the treestand.

The next big piece in this system is the pants. The stretch polyester material of the pants feels heavier than the shirt, and they seemed less breathable overall. However, compared to Sitka’s other offerings (such as the Ascent pants), these pants are still extremely lightweight. 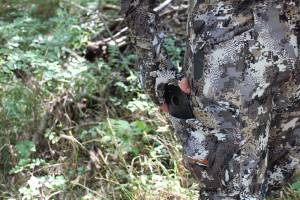 The pocket placement is utilitarian and well designed. Although pockets might seem like a small feature, the extra storage helps when you don’t have a jacket to shove random stuff into. 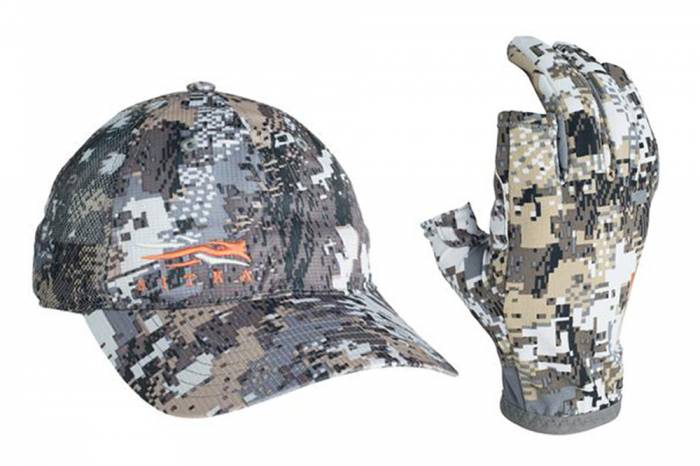 The hat and gloves round out the system. Normally in a hunting situation, you want your hat to help retain heat. In the early season, it’s nice to be able to have both concealment and breathability. The hat is very light, and I didn’t notice any heat buildup.

In the gloves, mesh panels like those found in the shirt and pants helped dump extra heat. The gloves have a second sewn-on palm grip for durability and an exposed thumb and trigger for increased feel on a rangefinder or release.

Polygiene odor control, standard on most Sitka pieces, is built into the ESW system. I tested it with good results. I won’t go into extreme detail here. You can imagine how sweat-drenched the pants became after trimming shooting lanes in 94-degree temps with Southeast Asian humidity levels. 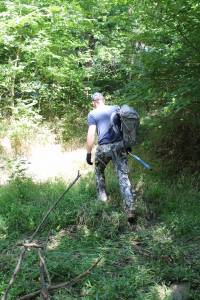 I stashed the pants in a grocery bag in the corner of my basement and left them alone for a week.

Your typical lightweight hunting pants, neglected in the same manner, would be ripe to the human nose and downright ghastly to a cervid’s sense of smell.

But after a week in the timeout corner, I didn’t smell any funk on the EWS pants.

Pro tip: Deer have a much better sense of smell than we do. Use the wind to your advantage!

With that out of the way, I think we all understand the point of odor-controlling fabric like Polygiene. You won’t fool a deer’s nose. But you may get that extra five seconds or the last two steps when the deer crosses downwind of your position.

This system will really shine for the hunter who needs to hike longer distances. The lightweight breathability and permanent Polygiene odor control technology are key benefits built into the ESW system for this aspect.

This lightweight fabric won’t hold up to major brush busting, so prep your trails well. The fabric collected quite a few burrs and stickers during my testing, but I’ve never found any hunting pants that don’t.

If you hunt south of the Mason-Dixon Line, you’ll get more use out of the lightweight breathability than hunters in the Midwest or Northeast. This system is a great addition to my full-season lineup. A quality set of merino base layers under this system will extend its usefulness later into the season. You can also utilize this system as a layer under another camo set for secondary usage.

Overall, it’s a great set of specialty gear that will help you comfortably extend your season on the front end.

Up Next: Hook & Bullet Bargains: 5 Deals This Week

Saving…
Hook & Bullet Bargains: 5 Deals This Week
Fly Tying for Beginners: Why You Should Tie and How to Start
×