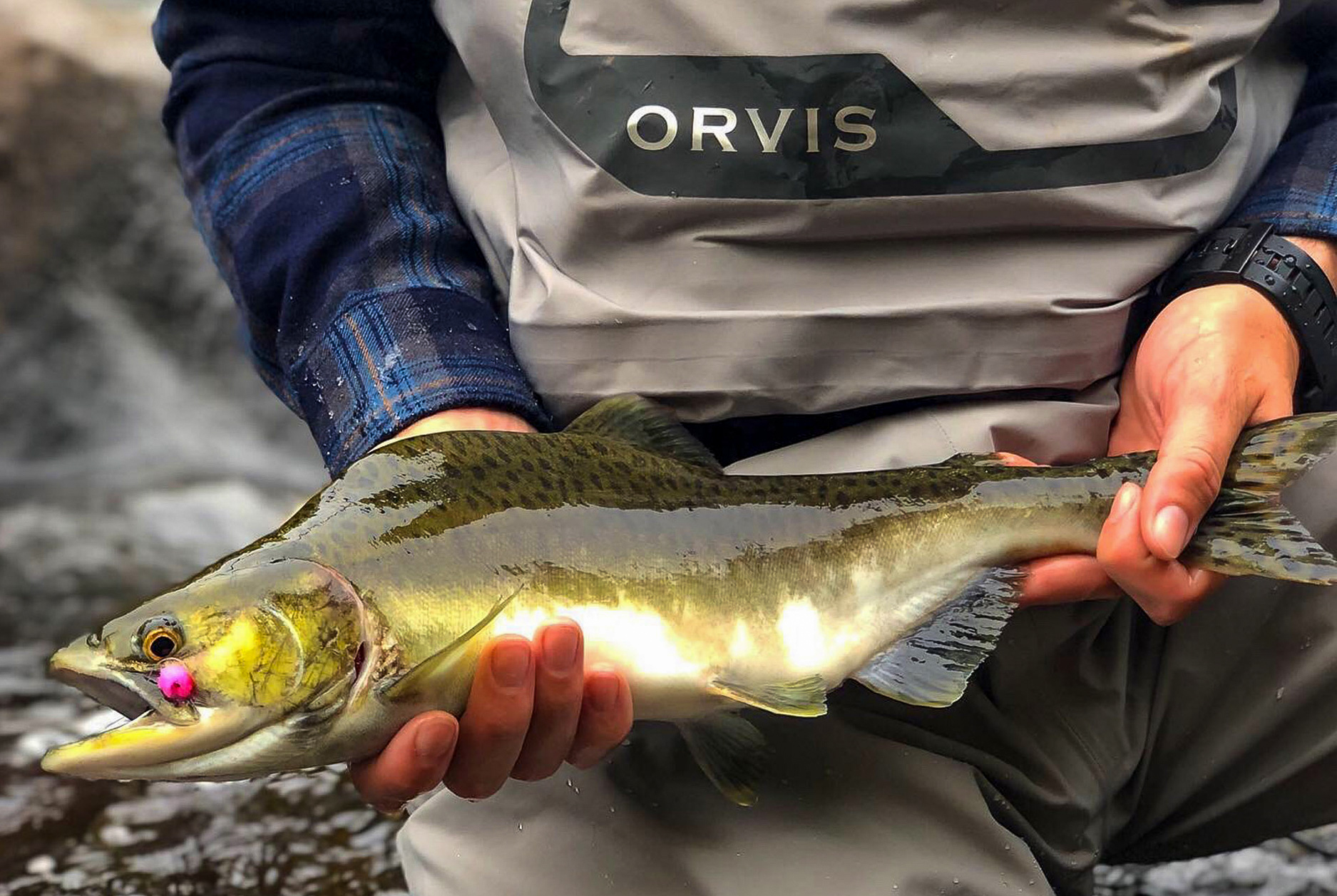 There’s a pink salmon run in Minnesota? You betcha. Here are a few fly fishing tips for locating and catching pink salmon in the rivers off of Lake Superior’s North Shore.

I was moving slowly along the bank when I saw them — I became flush with excitement. Several pink salmon were hanging in the slow current behind a log. “Zach, I found some humpies!” I called out. 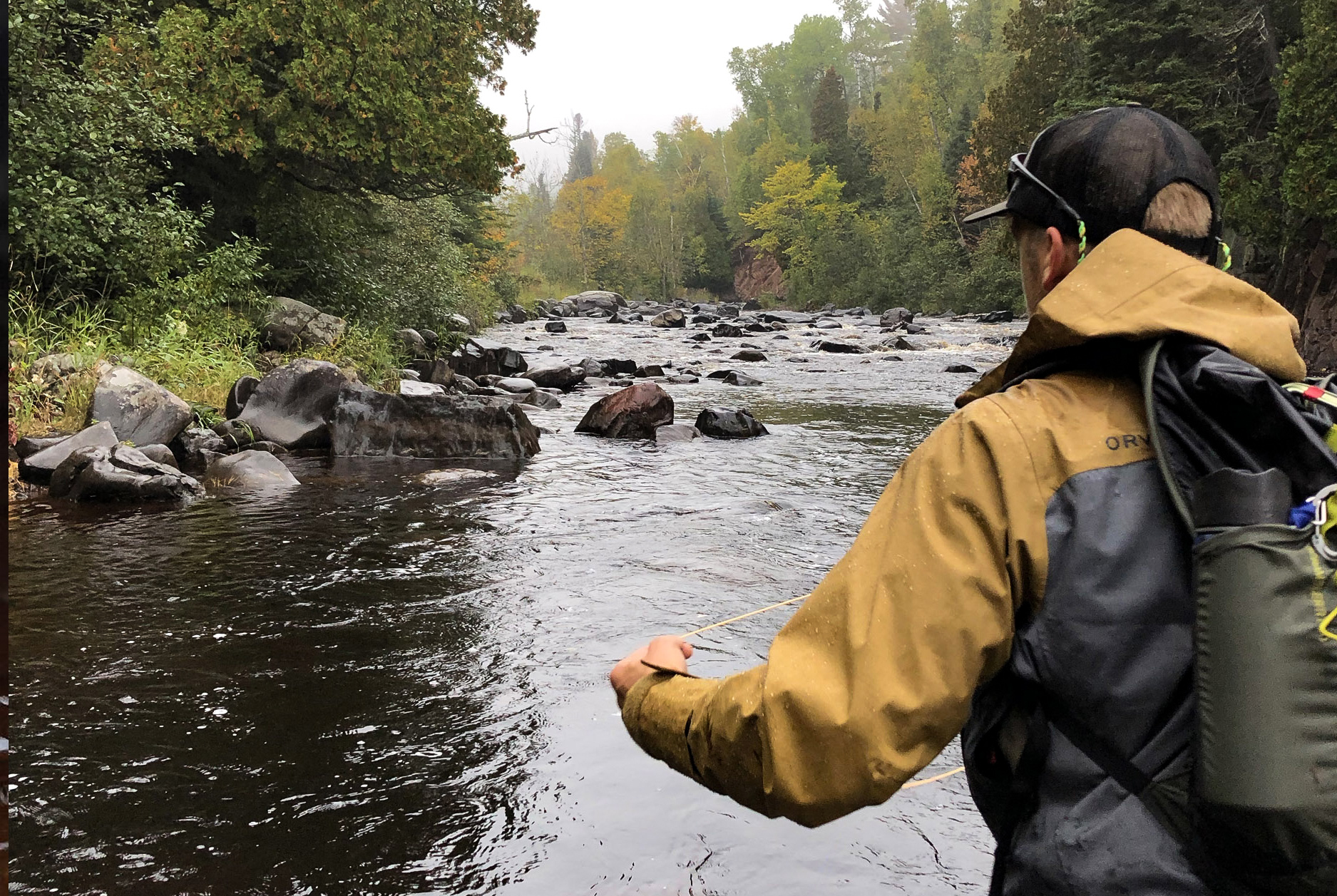 This was our first time targeting pink salmon on North Shore tributaries. We heard about the pink salmon run while fly fishing for steelhead on the same rivers earlier in the spring.

The catch rate sounded better than most, and catching a new species of fish is a blast. So we set out to get after it.

Here’s how we figured it out.

The Pink Salmon of Lake Superior

We were intent on coming back for the fall pink salmon run, so we started researching these beautiful salmon in hopes of increasing our chances to get fish on the line.

Pink salmon are normally found in the Pacific Ocean and certainly aren’t native to the Great Lakes. Lore has it that they were inadvertently introduced to the fishery near Thunder Bay in the ’50s, and they’ve been thriving since.

Most pink salmon live for only 2 years. Due to their short lifespan, they are the smallest salmon species in the Great Lakes, often weighing 1-3 pounds and measuring 12-16 inches.

They hatch in the rivers each winter. By May, most have made the journey to the big lake to feed and grow. After 2 years, they return to the river to spawn and, ultimately, die.

Lake Superior pink salmon run only once a year, and this typically happens in September. Rain triggers a spawning migration from the lake, and large numbers of salmon will push the rivers. It’s been said that the fishing is better on odd-numbered years because of their 2-year lifecycle, but there are some fish in the river every year regardless.

In the lake, they’re a light silver color, but they begin to transform as they enter the river. Their top half becomes dark-green while their sides and underbelly are splashed with pink and white. Most notably, males develop a hump behind their head that has earned them the name “humpback salmon,” or “humpies.” 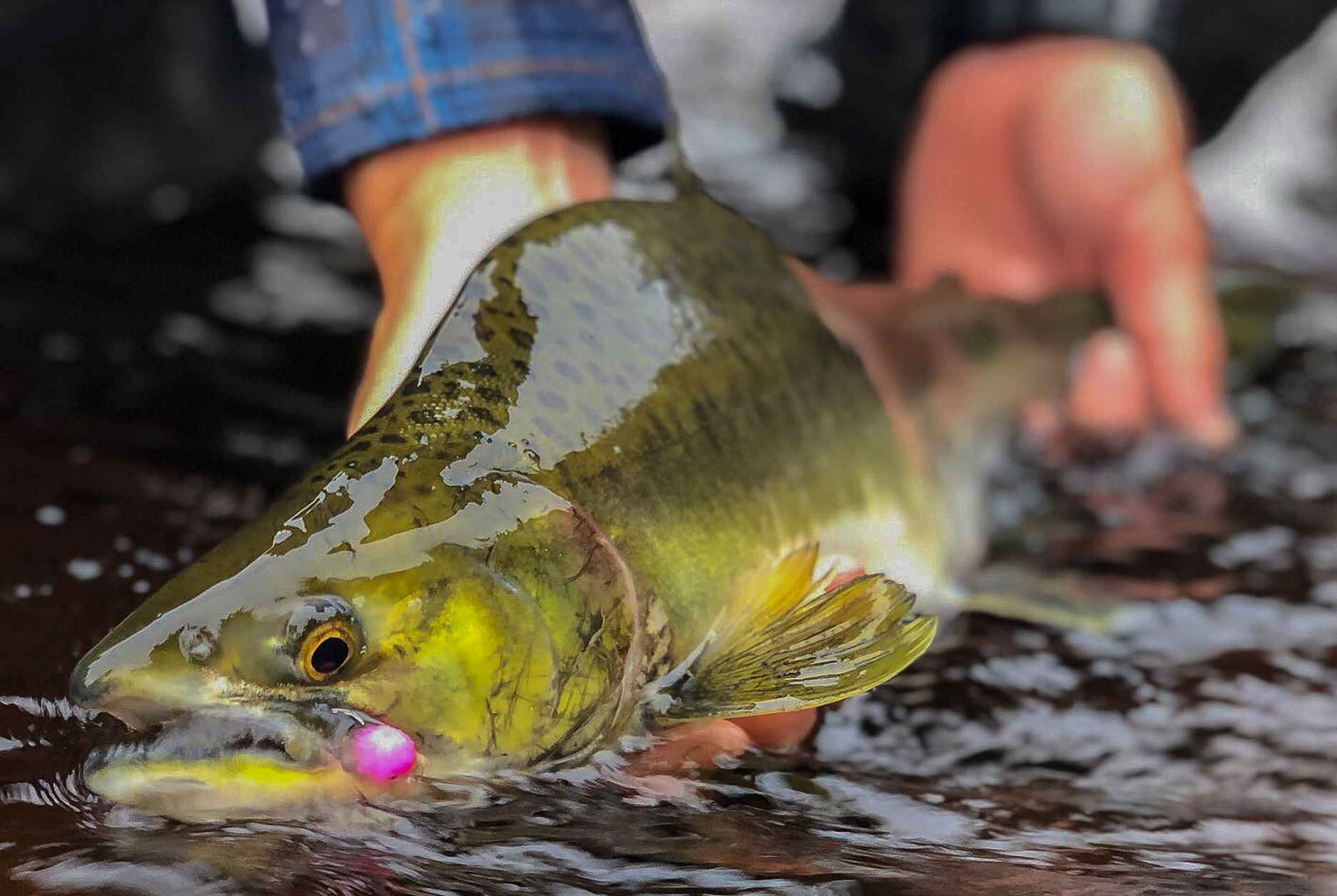 Another amazing change is that their stomachs start to disintegrate to make more room for eggs and sperm. They continue to decay the longer they’re in the river, and it’s not advisable to harvest and eat a pink salmon that has been in the river for an extended time.

To get some local knowledge and tips, we called up John Fehnel at Great Lakes Fly Shop and Scott Sorensen at the Fly Box & Company. Armed with information, flies, fishing gear, and enthusiasm, we pointed the Subaru north and set out on our adventure.

After spotting the salmon in the river, we watched for a few minutes as they darted into the faster currents and then back to the shallows. It was time. After several minutes of dead drifting pink eggs and pink squirrel nymphs, we had our first salmon on the line!

Twisting and turning, the fish darted out into the faster current and deeper water. We grabbed the net in panicked excitement as we pulled the fish closer to the shallows. A minute later, we had our first pink salmon in the net! 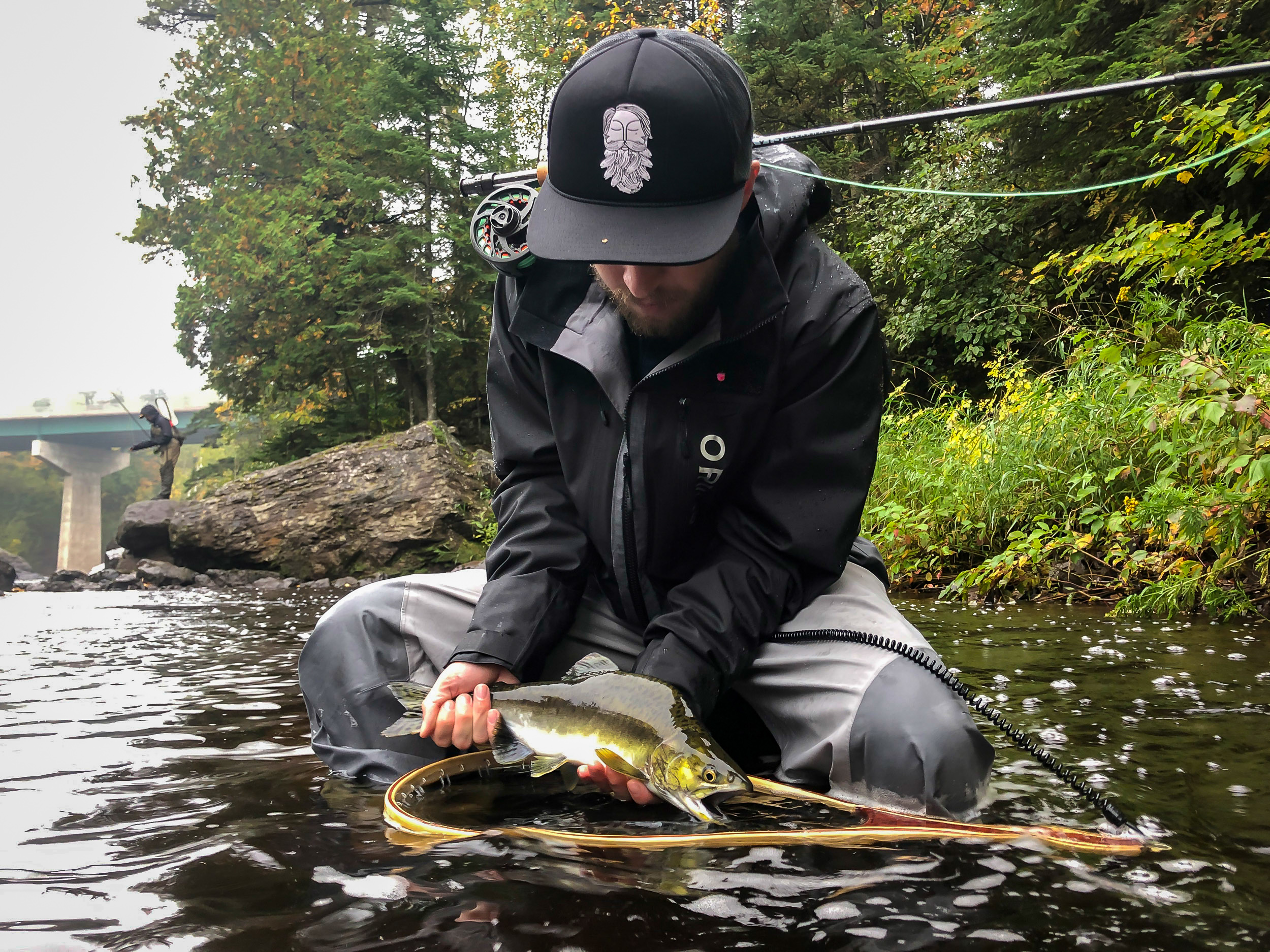 The feeling of accomplishment in catching a new species of fish is always amazing. In the net, we took a second to take in the details of this unique salmon — the striking colors, the large hump, and a black mouth. The pink salmon lived up to the hype.

Where to Find Pink Salmon in North Shore Rivers

During our North Shore trip, our best success came from sight-fishing. We walked the banks, looking in areas that we thought would hold fish, watching intently for dark shapes and fins swirling beneath the surface.

We also dead-drifted weighted nymphs through pools and runs. Lower water levels in the fall can cause fish to stack up in these areas, creating an awesome opportunity to hook into a pink. Though we didn’t experience this, we heard several accounts of people spotting a school of 30-plus salmon and having a banner day. Next year!

Finally, you can find fish at waterfalls that they can’t swim or jump up. This “barrier falls” creates a natural end to the run.

Watching salmon attempt to climb these falls was a major highlight. Pinks, brown and brook trout, and Coho Salmon thrust forward out of the pool and skittered up the falls before inevitably being forced back down to the pool below.

If you fly fish often, you probably have most of the gear you need to target pink salmon. Often, we use trips like this to test gear. With that, we’re sharing what gear we used with performance notes to offer context and share what worked for us.

Fly rod and reel. A standard 9-foot 5-weight rod and reel will work well. You could use a slightly longer or shorter rod in 4 or 6 weight as well. We tested Orvis’ Clearwater setup on this trip, and it did the trick.

Flies. We were told that pinks like pink, so we started there. We filled out fly boxes with egg patterns in a variety of colors and sizes, pink squirrel nymphs, pheasant tails, hare’s ears, scuds, and other flashy nymphs. Wooly buggers and San Juan worms would also do the trick.

Pinks can be tight-lipped, so change it up if it’s not working. 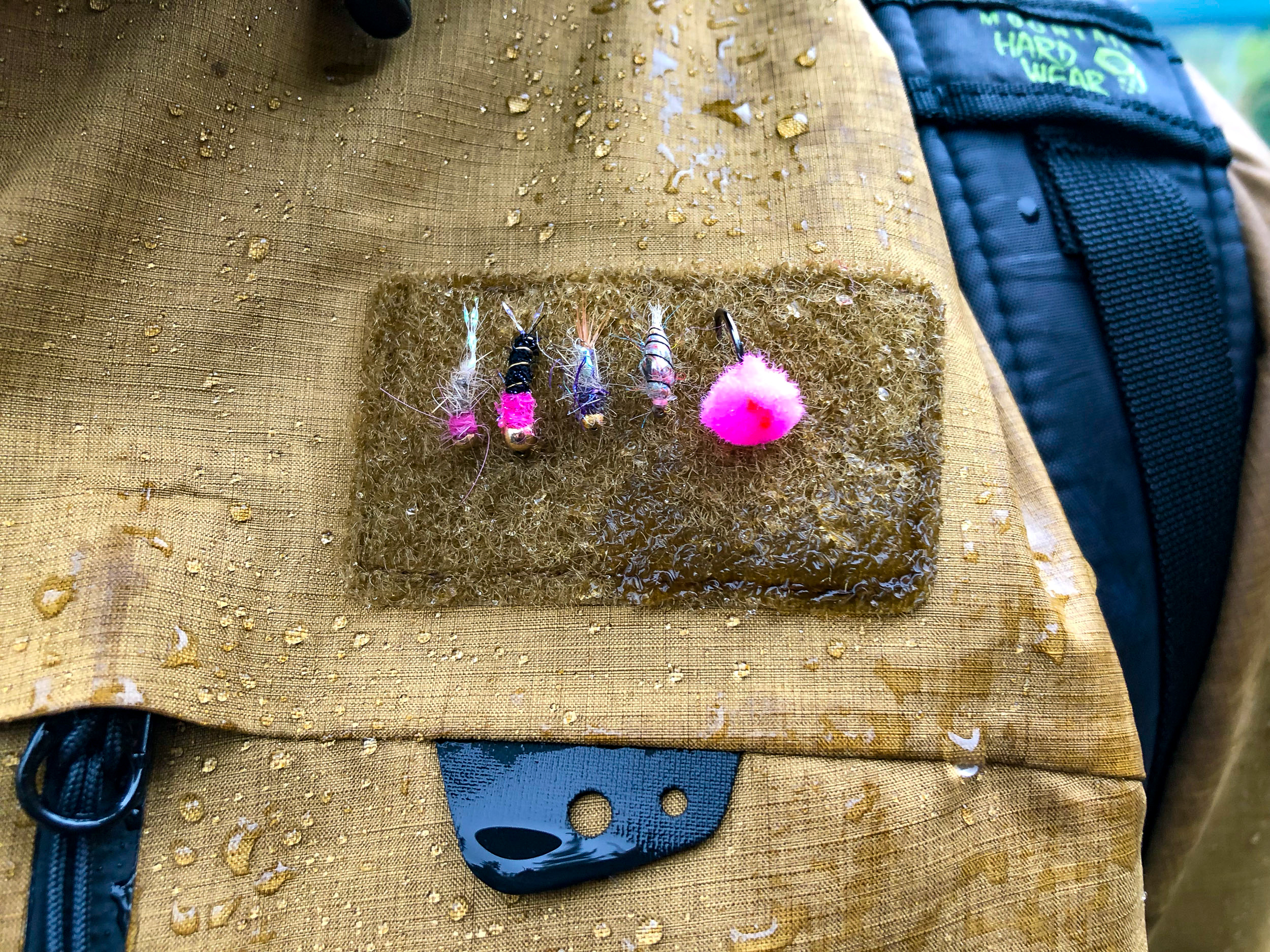 Waders, boots. A solid set of waders and boots makes a world of difference. If you already own some, they will likely work for pink salmon fishing.

But if you’re in the market for something new, the Orvis Ultralight Convertable Waders with Orvis PRO Wading Boots and Redington’s Sonic Pro HDZ Waders with Redington’s Prowler Boots have both performed very well during our year-long test.

Rain jacket and insulating layers. The weather along Minnesota’s North Shore was wild during our fishing trip. It ranged from 43 degrees Fahrenheit with hard rain to 73 and sunny in a few hours.

A rain jacket is a must-have. It allowed us to stay on the river and catch more fish while others headed to their trucks. We used Orvis’ Pro Wading jacket to fend off the rain. A wool flannel from icebreaker underneath kept us warm and became the primary layer when the rain stopped.

September water temps can be 48-58 degrees, so don’t forget some pants or long underwear for underneath your waders. This was our first time testing the Orvis PRO Underwader Pants.

At first, the Underwader pants seemed a little excessive. But after a few days on a cold river, we came to really appreciate the extra features and comfort they offer and would deem them a splurge-worthy item.

Polarized sunglasses. You always fish with polarized glasses. It helps you spot fish more easily and protects you from errant casts and hooks. 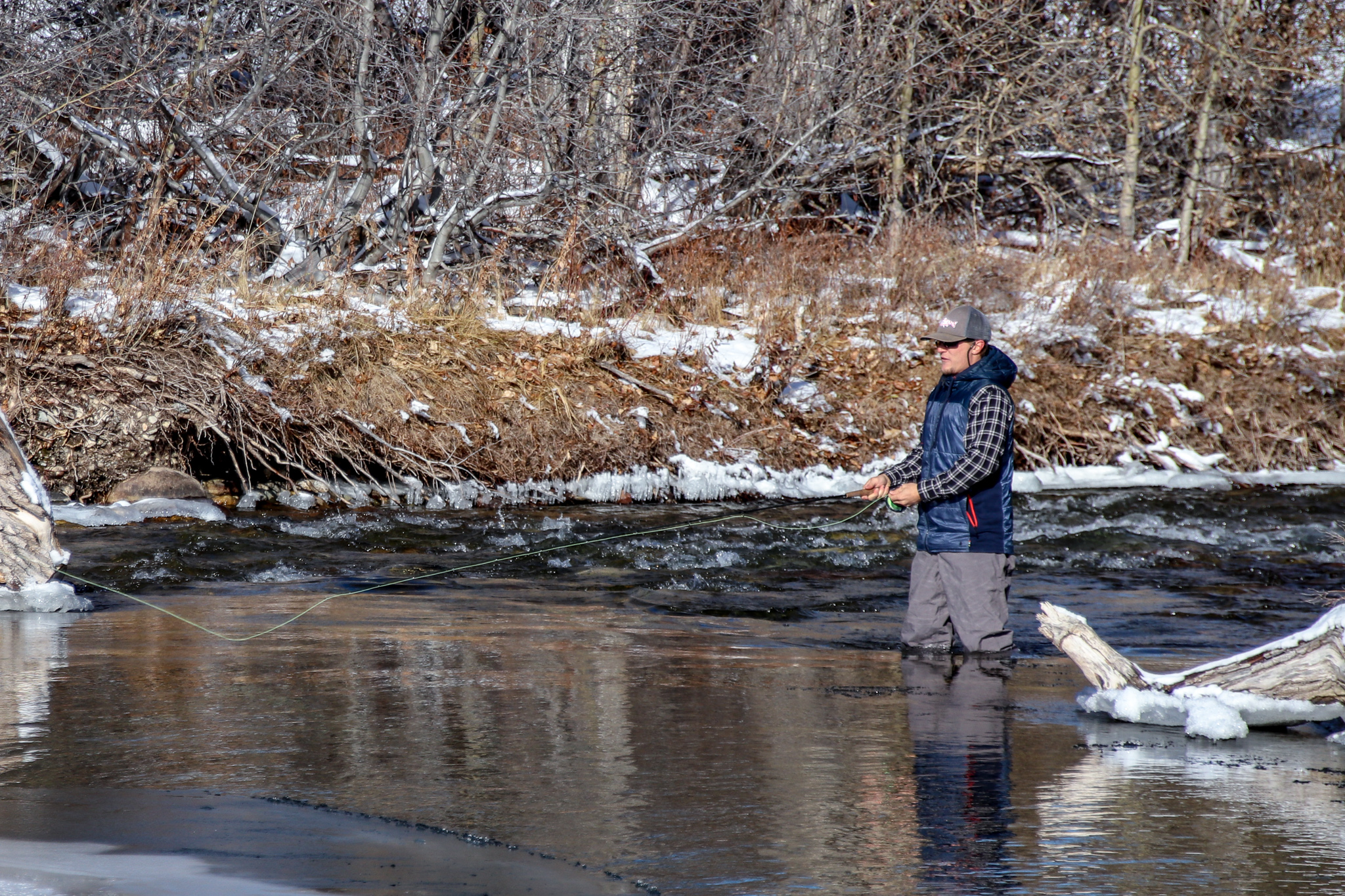 A quality pair of sunglasses is a necessity for the active outdoors person. With the market flooded with sunglasses, we’ve narrowed down the best polarized sunglasses for fishing from the past summer. Read more…

A pack to carry it all. We spent all day on the river and needed space for flies, lunch, water, and to stash layers as the weather changed. Ideally, the pack would be weatherproof or waterproof.

We’ve used Fishpond’s Summit Sling, a Simm’s G4 Sling (discontinued), and an old Mountain Hardwear waterproof backpack for a few seasons now. They were key on this trip as well. 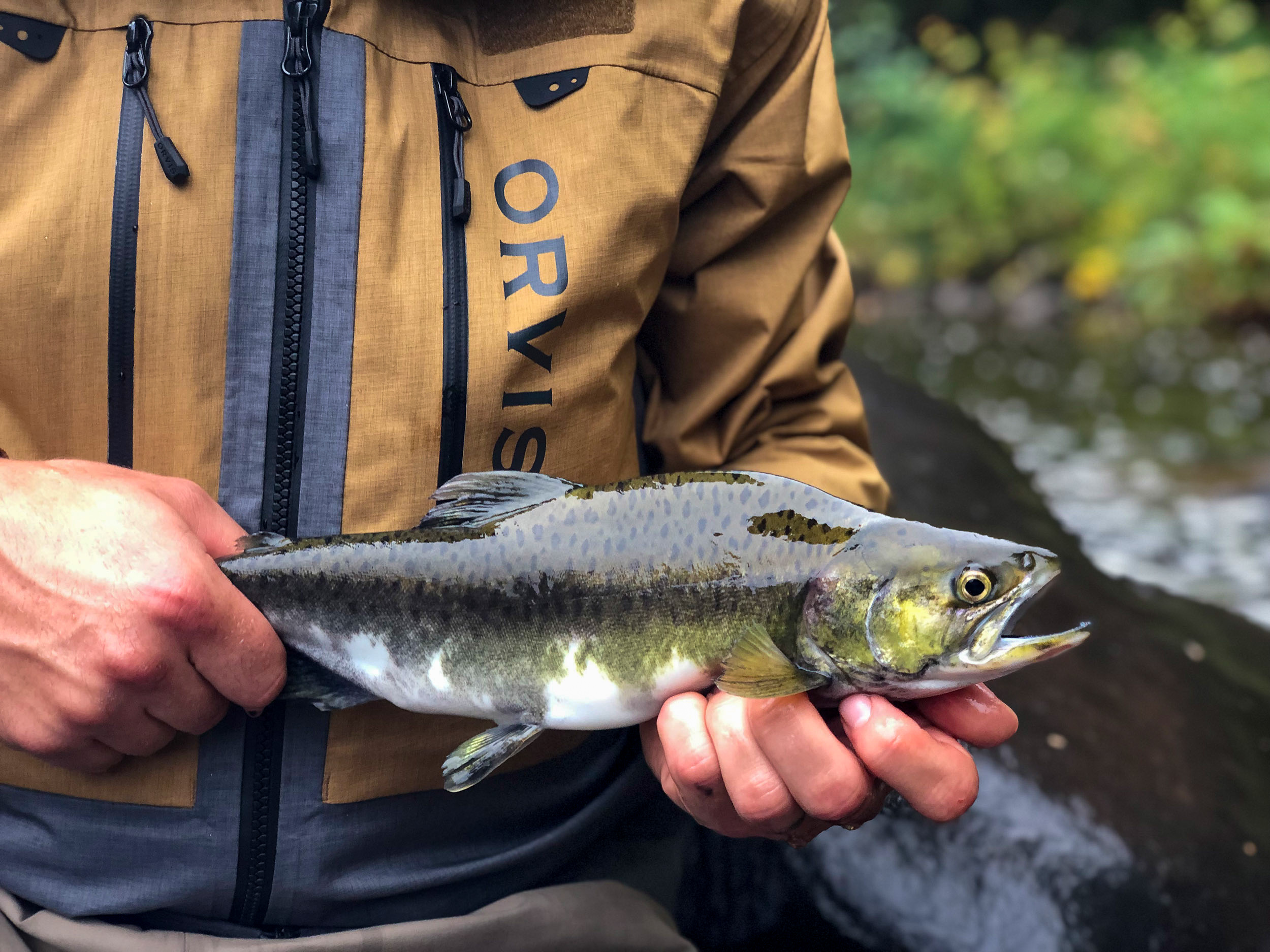 While fishing, it’s important to keep in mind that these fish run upriver to spawn. To fish pinks ethically, it’s best to play them quickly, keep ’em wet, and minimize handling.

There you have it. You’ve now got the basic info you need to target pink salmon while fly fishing this fall. Good luck — and see you on the river.