European nymphing often appears to be complicated and confusing. But fret not, it’s not as difficult as it seems.

It might seem like there are a million different ways to nymph fish, but ultimately, the euro techniques can be simplified so that an everyday angler can go out and catch fish using the same methods as the world’s top anglers.

Orvis Helios 3F Rod Review: A Euro-Nymphing Rod That Can Do It All

European-style nymphing is growing in popularity on trout waters across the United States, and fly rod manufacturers have taken notice. Orvis follows suit with the new Helios 3F. Read more…

Read on for the basics of getting your euro-nymphing technique dialed.

What You Actually Need

There are a few things you’ll need to get started. Some of the absolute necessities are a euro leader and euro-nymphing flies. Although not necessary, it would also help to get a rod designed for euro nymphing — don’t feel like this has to be a huge investment, though. There are numerous rods in varying price points across manufacturers.

I tie my own specialized leaders for euro nymphing, but that isn’t required when you’re getting started. Generally, you only need a long leader (by American standards) with a sighter built into it. Don’t know what a sighter is? Check out my last article, “European Nymphing: The Hot Fly Fishing Technique Explained.”

European nymphing is catching on and catching fish. Here's how and why you should try the trending technique of euro nymphing. Read more…

One of the best over-the-counter options is the Rio Euro Nymph Tapered Leader.  This leader has a 9-foot butt section attached to 2 feet of dual-colored sighter material. Rio finishes off the leader with a tippet ring, a small metal ring you attach tippet to. 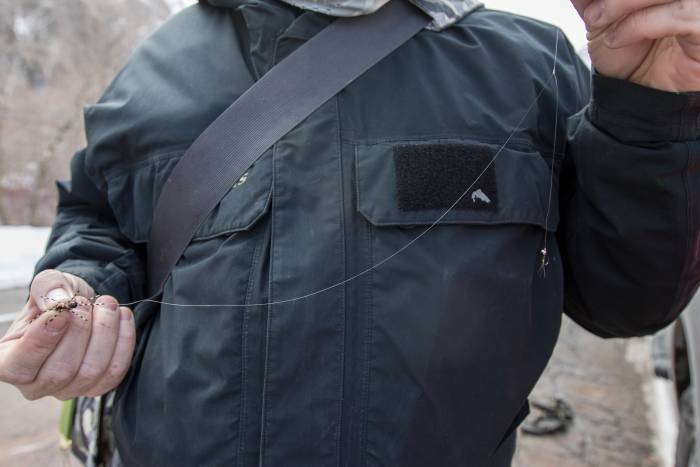 For the tippet section, I recommend starting with a 3-foot piece of 4-6X attached to the tippet ring with a clinch knot. Then, tie another 2-foot section of the same-diameter tippet to the section you just tied on.

Tie the pieces together using a triple surgeon’s knot, but leave the bottom tag end long — about 2½ inches. You can then attach a fly to the tag end as a dropper fly and add another fly to the bottom piece of tippet as a point fly.

What's on Your Reel? Leader and Tippet Explained

The leader and the tippet are crucial elements to fly fishing. Once you've got the backing and fly line figured out, you're ready to learn all about them. Read more…

I always encourage anglers to support their local pro shop. Many fly shops have started carrying euro flies. Ask the shop employee to point you in the right direction. If they don’t stock any, don’t worry, there are other places to get them.

Orvis carries a decent selection of flies on its website that are available for order. It labels them as “tactical flies.”

Euro nymphing is a high-stick, close-quarters method. This fact, combined with the long leader, means you’ll virtually never fish with any fly line past the rod guides. You fish only the monofilament leader.

The cast is initially a challenge. With no fly line to load the rod, you have to change your casting stroke. First and foremost, you need to overpower your casting stroke more than you would in a standard fly cast. Second, you should use more wrist in the cast. A slight wrist flick on the back cast will add acceleration to your cast, helping those light flies and leader load the rod.

After executing the cast, the angler holds the rod high to keep the sighter off the water. The flies are then led downstream with the rod tip and sighter.

The flies should be led downriver only enough to keep up with the drift. Think of it as keeping up with the flies rather than leading them. If you’re following them at the right pace, there will be a slight downstream sag in the sighter. 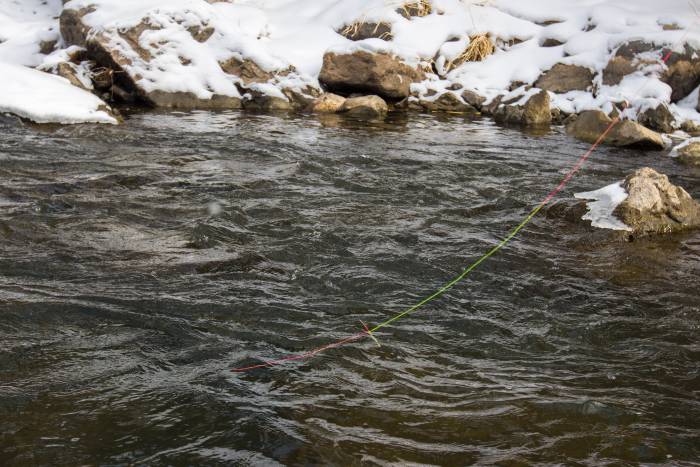 This balance is probably the most challenging part of euro nymphing. If you get behind the flies, you won’t be able to detect the strikes. If you lead them too much, you’ll drag them faster than the current.

It can be tough to articulate this leading of flies in words, so here’s a great video put together by Rio that briefly demonstrates how to fish European-style.

When the slight sag in the sighter straightens or pauses, set the hook downstream! It’s a fish, or your flies have ticked bottom. If it’s bottom, turn the hookset into a backcast for your next drift.

One of the best reasons to start euro nymphing is that it works well in all water types. Indicator fishing only excels in pools and water with uniform currents. The second you introduce varying current speeds, fly line and indicators anchored in the surface artificially drag your flies.

Euro nymphing, on the other hand, involves fishing with nothing tethered to the surface. So, tricky pockets with varying currents now become fishable with nymphs. In fact, that’s probably the easiest type of water to learn to euro nymph. You’ll be getting close to fish, so the fast, broken water can help shield you from a trout’s view. 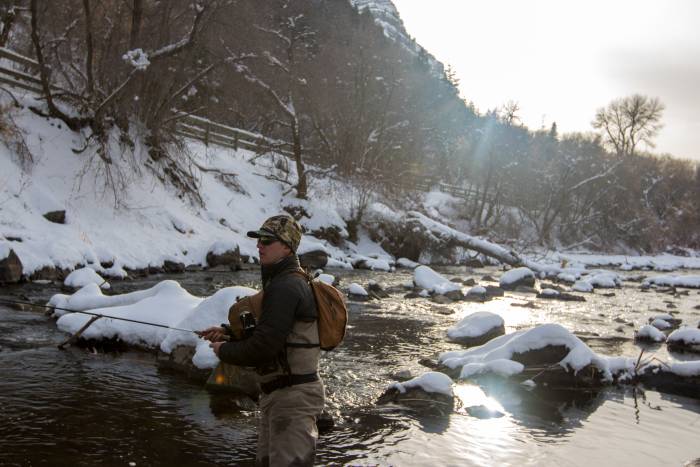 It’s best to start euro nymphing in close ranges. Long pools and glides can be problematic due to spooky fish and the difficulty of controlling a euro rig at long distances. Start with short pockets and riffles. As you get the hang of it, you can move into other water types.

It’s common to struggle when you first start euro nymphing. You probably won’t have much success with it your first few times trying it. Don’t give up, though. Once you get comfortable with it, you’ll get immense pleasure from catching fish in water types you would usually pass over.

This has only been a brief overview of the euro nymphing, designed to get you on the water as soon as possible. Fly Fishing Team USA members Lance Egan and Devin Olsen have spent years mastering this technique. Along with filmmaker Gilbert Rowley, they put together two phenomenal instructional films on euro nymphing.

I can attest that the films are well worth the investment. If you want to learn more about euro nymphing and fishing in general, do yourself a favor and watch them. You won’t regret it.

Up Next: Cabela’s Spring Savings Sale: Our Top Picks