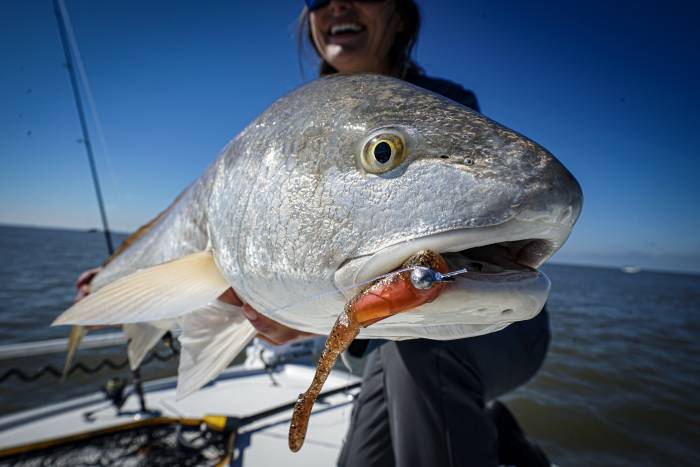 The redfish is one of the most prominent, highly sought-after inshore gamefish in the Gulf of Mexico and on the East Coast. Read on for more on this iconic saltwater catch.

Redfish, or red drum as they are more officially called, are known for their stubborn fighting and distinctive spotted tail. Fishermen and women battle redfish in the surf of Texas, the marshes of south Louisiana, the backcountry of the Florida Keys, and the flood tides of South Carolina. And they take on the giant bull reds of North Carolina’s Outer Banks.

There are as many wonderful redfishing locales as there are ways to catch them. Here, we will break down the basics of the redfish, how to target them on your own, and where to hook up with a guide to catch one of these incredible creatures in their native habitat.

The red drum is known by a few nicknames, redfish being one of the more popular. But, if an angler is talking about channel bass, puppy drum, spot tail bass, or even simply reds, they’re all talking about the same thing.

Belonging to the drum family, male redfish — also called bulls — make a drumming sound with their swim bladders during the spawn. This occurs from mid-August to October, and it can make for some of the most lucrative times to fish for these big bulls.

Redfish can live up to 60 years, but they typically mature by 3 to 4 years old. Length at maturity for males is typically 28 inches, and about 33 inches for females. At this time, weight varies but is often about 10 pounds.

Trophy redfish weigh much more, and the largest redfish on record measured 57 inches and weighed 94 pounds, 2 ounces. And this fish was caught while surf fishing in 1984 off Hatteras, North Carolina.

However, don’t expect 94 pounds on the end of your line. What you can expect is a hard-fighting saltwater game fish, with a large black spot near its tail, that makes for great table fare if you’re not legally required to release the fish.

Reds are exceptional eaters, and they have a varied diet of mullet, menhaden, crabs, live shrimp, Atlantic croaker, mud minnows, and more.

How to Catch Redfish

Through much of their range, redfish are a great target for surf anglers. Whether you are fishing coastal waters in Texas or North Carolina (or most anywhere else), the process is similar.

Rig up a live mullet or large piece of cut bait and cast it into the surf. The rig generally involves a 50- or 60-pound leader, a circle hook, and a pyramid sinker to keep the line in position.

You can cast four or five rods into the water, placing each in a rod holder, and wait for the rod to arch over — line screaming away. When the bull redfish run in the surf in the fall each year, this is great sport.

Site Casting From a Skiff

Site casting to tailing reds in shallow water is a favorite pastime of many anglers. Not only can you target big fish in shallow water on light spinning gear, but you can also target them on the fly.

The specifics vary a bit by region, but the telltale signs are the same. Boats navigate shallow flats or bays looking for tailing redfish (fish with their tail fins protruding from the water), schools of feeding fish — marked by clouds of mud, bait scattering, or sometimes by flocks of birds — or roaming schools.

When you locate the fish, you cast the bait into position and hang on.

Where to Catch a Redfish

Sight Fishing in the Florida Keys

Captain Mark Cockerham can pole the flats around Islamorada, putting you on schools of redfish mixed with snook, tarpon, speckled trout, sharks, and sometimes even permit and bonefish. It is a particularly exciting brand of fishing that combines exotic and beautiful scenery with the ever-present opportunity to catch giant fish (of all manner).

Watching a redfish charge a swimbait in gin-clear water is about as cool as it gets. Depending on how the action is, you are liable to catch five or six species in a day.

Sight fishing for reds in Charleston, South Carolina, involves running the flood tides in grass flats. On the right tide, you can sight cast to redfish lurking in really shallow water. The sight of a redfish tail sticking out of shallow water, which 20 minutes before the tide came in was dry land, is a great experience.

You can also catch the fish here in channels and bays, targeting oyster beds or other structures. Captain Jamie Hough of Redfish Mafia Charters is a great choice here.

The added benefit of fishing here is the proximity to Charleston and all that it has to offer. You can easily add a day of redfishing to a family vacation, or incorporate some incredible dining opportunities to a fishing trip.

Perhaps the most vaunted fishery lies in the marshes of south Louisiana off the Gulf Coast. A husband-and-wife team, Captains Eric and Moe Newman own Journey South Outfitters in Venice, Louisiana.

“We specialize in catching bull reds. We’ve gotten away from slot redfish limit trips. We focus on trophy redfishing on topwaters, swimbaits, and scatter baits,” Captain Eric told us.

Newman says the fishing is great year-round in his area and classifies a bull redfish as a trophy fish of 32 inches or longer. “The pinnacle of trophy redfishing runs from July and August and October, November, and December.”

Captain Eric takes his clients out on a “technical skiff.” There, visitors typically sight fish in ponds and bays, and the trip also includes blind casting to bait. According to him, a really good day results in 50 big fish caught, ranging from 15 to 40 pounds.

“Some days we catch them walking the dog,” Newman explains of the process of making the lure look like an injured fish fleeing haphazardly. “Other days we’ll catch them throwing the Whopper Plopper from River2Sea. The lure was invented by Larry Dahlberg — he fished with us in 2010. It’s meant for muskie, but the redfish love it.”

How to Cook Redfish

Before cooking a redfish, it’s imperative to know the legalities of the waters you’re fishing when it comes to keeping a redfish. Not all reds are legal for possession, which means that some must be released back into the water as soon as they’re caught.

But, if you catch a fish that is legal for possession, it’s some of the best eating on the coast. The younger and smaller of these saltwater fish tend to be better eating.

Many anglers choose to use an electric fillet knife — like the BUBBA Cordless Electric Fillet Knife — as the scales of this fish can be beastly to cut through.

From there, the red drum has a mild, sweeter flavor with a medium-firm texture. It is delicious when prepared in a variety of ways, from grilling whole to sautéing to poaching. Many folks prefer Cajun-style redfish, but you can get really creative with cooking reds however you’d like.

No matter how or where you fish for them, red drum are a noble pursuit. These wonderful creatures are among the most accessible inshore saltwater gamefish in the United States.

All redfish fight hard. They grow large — upward of 60 pounds in some places, with 40 being more common in others. They will also eat a variety of natural and artificial baits.

Redfish are also a great target to get kids into fishing. After all, a surf fishing trip can be a beach day, with the bonus of a few nice fish on the end of the line for parents who love to mix angling with sandcastles.