Solo backpack hunting is not for the faint of heart. It’s for those who thirst for adventure and adversity.

Striving for adventure in wild places is big these days. It’s a far stretch from life in the concrete jungle and evidence of a burning desire for something more. I get it.

Loading up a backpack for a few days and living out in the dirt, all the while trying to bring home some tasty wild game meat? Yes, please.

That in its own right is teeming with adventure, but to do it alone? Now, you’re at a completely different level of adventure both mentally and physically. Between carrying everything on your back to grinding through the mental battles that can occur, solo backpack hunting is not for the faint of heart. Nonetheless, it has a growing appeal.

In short: If solo backpack hunting is on your radar, keep reading, as I’m going to lay out the ins and outs for you about doing so.

While the idea of backpack hunting is attractive to many, actually doing so will cut the fat from that list pretty quick. Especially if their first trip is a planned 10-day western hunt. I say “planned” because more times than not, they never make it to the 10-day mark. It’s too much, too fast.

So, in order to start off on the right foot with a good experience, it’s important to start small. Any sort of solo adventure is a good place to start, really.

I got my solo start going on day hunts alone from a base camp. It allowed me to get comfortable with myself out there. From navigating on my own to sleeping in a tent alone, it all helped me build a foundation for a solo trip into the backcountry. And you need a foundation.

Once I got the hang of that, I started doing quick overnight backpack hunts. Trips that were just a mile or so from my truck. That made me familiar with the motions of backpack hunting alone and ultimately built up my confidence surrounding the whole endeavor.

It wasn’t until years later that I felt confident enough to live out there alone for more than a week. Had I tried to do that right off the bat, I would have had a very different view of backpack hunting alone — and I may have not ever tried it again.

Mitigating Risk When Alone in the Backcountry

Backpack hunting alone — and doing so safely — requires a few precautions. The first is communication. Nowadays, I use a Garmin inReach Mini ($350) to stay in touch with people back home. Cellphones can make great GPS devices with certain mapping apps, but service is often an issue in the woods.

A communication device sets my wife at ease knowing that I’m OK, and it sets me at ease knowing that she’s OK. Before that, though, I’d only leave her with detailed descriptions of where I was planning to park and hunt, the duration of my stay, and so on. This is something I still do, but now I can at least talk with her throughout my trip.

Secondly, I try to avoid sketchy situations I’d otherwise likely tackle if with a friend. I’ve done some real dumb stuff in the mountains with buddies, but I wouldn’t dare do them solo. It’s just not worth it. When there isn’t someone there to help you, should things go south, you’re playing a different game.

Third, you need to carry a legitimate first-aid kit. Pack items like QuikClot and a tourniquet — and the know-how to use both.

Risk mitigation happens before and during the hunt, but after is too late. Be smart and hunt smart.

Understand the Commitment of Distance

I ran into a guy recently that hiked 6 miles into camp and ended up never leaving it to hunt. He was whipped and ended up going home the next day. After all of that planning, there was not enough preparation, and he missed out on a great adventure because of it.

Being solo, you need to prepare accordingly.

First off, it’s imperative that you know your physical limits. We’ve all got one, no matter how good shape you’re in. The physical exertion that comes from backpack hunting solo goes way past how far you’re planning to hike in order to reach camp.

Think of the big picture here. If you’re going 5 miles in, you’ve got at least 10 miles of hiking in front of you with camp on your back. That’ll just get you back to the truck and doesn’t include actually hunting. In the best-case scenario, you’ll be coming out heavy with a critter and camp.

And that might involve multiple trips. Suddenly, that 10 miles can turn into 20-plus miles. So, when planning and preparing, try to be realistic about this number of miles. There is an allure to “going in deep.”

Going in deep might not be the best option going solo, though, and there’s nothing wrong with that. Be honest with yourself.

Getting in Shape for a Solo Backpack Hunt

The best way I’ve found to get in shape for solo backpack hunts is by hiking in the mountains with a loaded backpack. What better way to prepare than by doing the thing that you’ll be doing? If you don’t have mountains, try using a Stairmaster or even just doing step-ups on a chair.

But not all of us have access to the mountains.

The online fitness program MTNTOUGH is designed to prep hunters for the demands of the backcountry. And it recently came out with an app that can help you stay fit wherever you are in the world. That said, you can also join your local gym, get into some HIIT workouts to up your VO max, and hit any local hills to build hiking strength.

What you’re striving for is strong legs, a strong core, and overall endurance. The ability to go and not stop is extremely valuable to a backpack hunter. 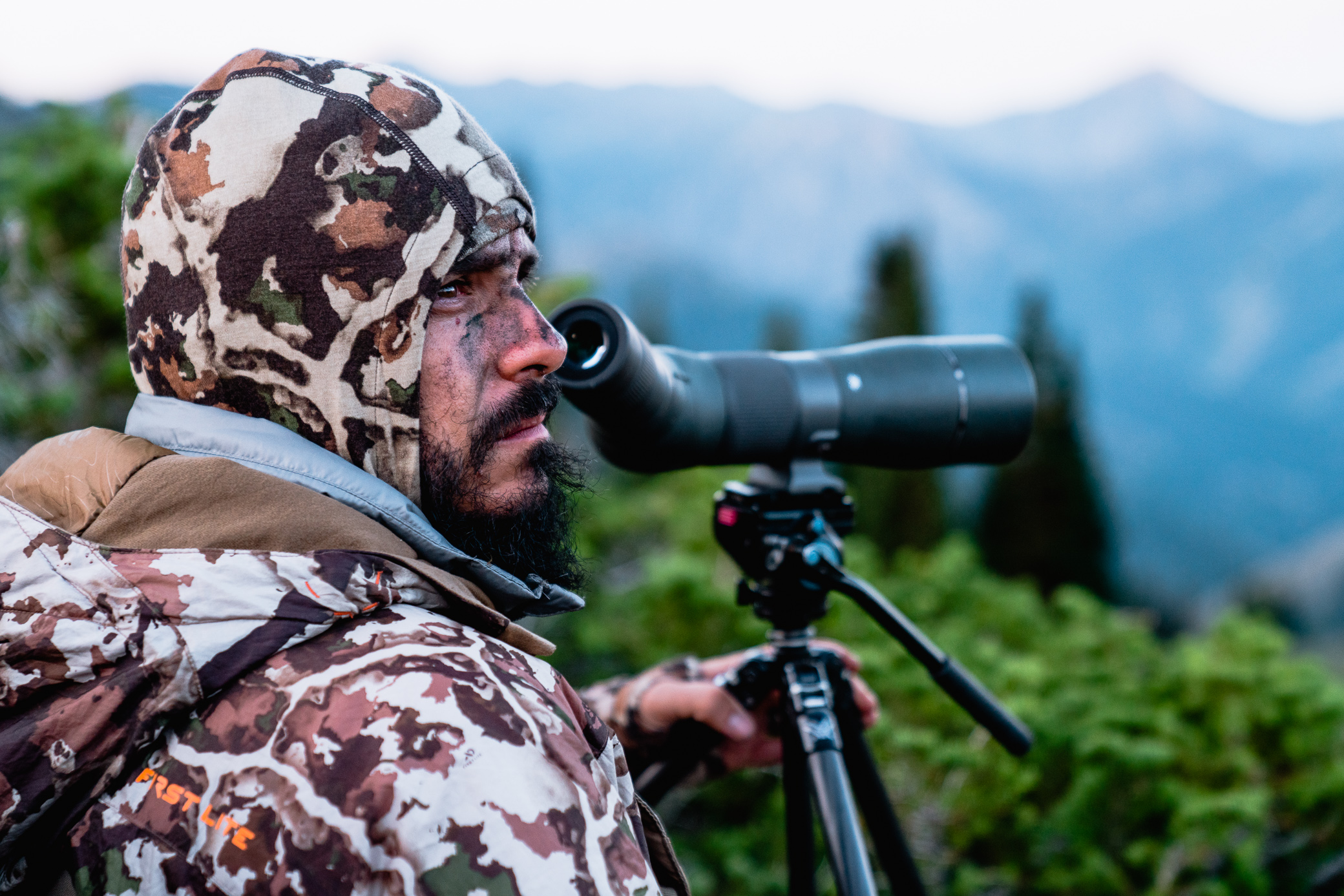 Mental toughness is likely a solo backpack hunter’s most important part of their toolkit. That’s the biggest survival skill that keeps you in the backcountry solo, especially when the going gets tough. It’s much easier mentally to head home when you’re alone.

There are nobody else’s expectations to contend with. Only your own. And the harder things get, the easier it gets to give in to the thoughts of a warm bed back home. Strong minds will outlast strong bodies every day of the week in the backcountry

The best way to strengthen the mind is through doing. It’s the only way.

I legitimately used to have a fear of sleeping alone out there. Fear that I would become a bear’s late-night snack. Any little noise would put me on edge. I also used to throw in the towel if it began to rain.

Nowadays, after so much exposure to sleeping out in the mountains and dealing with my fair share of bad weather, I’m much better off, and quite comfortable, actually.

Aside from getting out in the field and embracing the suck, try embracing the suck back home too. I’ve found that doing hard things that I don’t necessarily want to do helps build the ability to grind. Whether it’s pushing through a workout that I absolutely dread, tackling that yard work that’s been stacking up, or simply enduring a tedious diet.

Whatever it is, learn to endure and you’ll be happier out there alone.

Opportunity Lost Is Nothing Gained

My first solo hunting trip in the backcountry was one I’ll never forget. First off, I almost didn’t go, to begin with, and even almost turned back three-quarters of the way into my hike. I kept trying to conjure up excuses for not going through with it.

That trip went from bad weather to me thinking it was just a bad idea being back there alone. It was also a bear hunt, so there was that aspect as well.

After spending a few nights in the backcountry hunting, though, I walked out of that place with a grin from ear to ear. I had successfully gone through the motions of a solo backpack hunt, didn’t get eaten, and even turned up a few bears in the process.

No, I didn’t get a bear, but I left that place with something much bigger: a new addiction. Solo backpack hunting is definitely not for everyone, and that’s OK.

With anything in life, I think it’s important to remember this. Intimidation is a crook, and opportunity lost is nothing gained. Now, go load up your hunting pack. Time for a high-country adventure.

For those interested in learning how to start out backpack hunting, check out Josh’s book Becoming a Backpack Hunter: A Beginner’s Guide to Hunting the Backcountry.

This is a resource that will take you from not even knowing if you want to backpack hunt, all the way to packing an animal out back to the vehicle, and everything in between.

Backpacking Alone Is for Everyone

It can feel overwhelming to backpack or hike alone. That's a good thing. Learn why and where our editor chooses to backpack alone — and how you can too. Read more…

Lots of stuff can go wrong in the outdoors. GearJunkie sat down with Sitka Gear's John Barklow to talk personal safety and preparedness for hunting adventures. Read more…

Up Next: Turkey Hunting 101: The Gear You Need to Get a Gobbler

Saving…
Turkey Hunting 101: The Gear You Need to Get a Gobbler
6 Beginner Backpacking Trips in the US
×