The Flycraft Stealth Fisherman package is a trailerless, portable, inflatable craft that weighs 100 pounds and is fully-rigged for two anglers. We floated several rivers for this review. 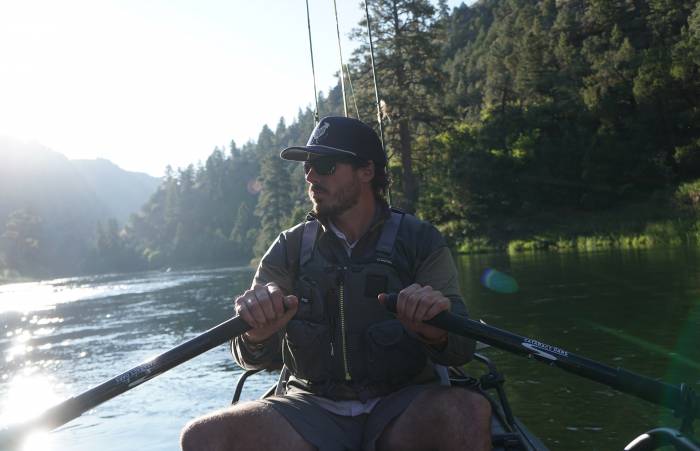 I constantly search for fishing locations, and the Flycraft has opened access to new options for me. I needed a craft I could transport with ease. It also had to perform well in the variety of paddling venues. 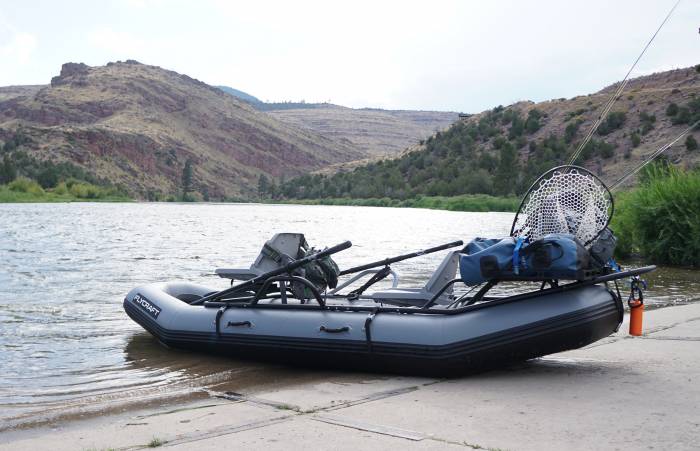 My introduction to Flycraft was at the Great American Outdoor Show in Harrisburg, Penn. As an avid fly fisherman, I was immediately drawn in and needed to know more.

Soon, summer hit and I found myself guiding fly fishing clients on the banks of the Provo and Heber rivers in Utah. Luckily, Flycraft’s HQ was a short drive away in Salt Lake City. The call was made, and soon after I loaded the Flycraft Stealth Fisherman onto my trusty Tacoma for post-work fly fishing runs.

All three raft options have the foundation of a PVC 4+1 (floor) chamber raft with an aluminum frame holding two 360-degree swivel seats. The full foundation package includes the following:

Flycraft claims this boat does not need a trailer to be transported. It’s true: This functional fishing craft excels with various transport options.

For the entirety of this review, I transported the Flycraft on top of my Toyota Tacoma’s rack system on the shell. The Flycraft with the frame attached didn’t fit inside of my truck bed with the shell on.

You don’t need a truck to transport a Flycraft. The boat will fit into the trunk of most mid-sized cars once deflated and the frame is broken down. It will take more work to get ready to fish, but it’s an option. 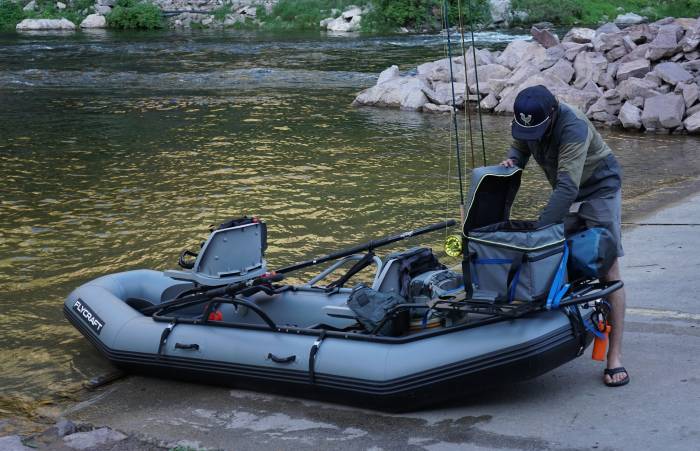 Other transport options include the bed of mid to large trucks, roof racks, inside campers, and bush planes. And it can be broken down and placed into commercial airlines for flights.

The transportation element of the Flycraft is where I feel it shines. There isn’t another two- or three-seat inflatable drift boat with better transport options on the market that I’ve found after researching.

Adventures in the past year put me on the Green River in Flaming Gorge Canyon, the Provo and Weber rivers in Utah, and the Bighorn and mighty Yellowstone rivers in Montana. I also accessed deer hunting locations via waterways, as discussed later in this review.

Loading and unloading from the racks on my Tacoma generally involved myself and a friend to help. The times I was able to park next to the boat, I was able to lift the nose up and secure the Flycraft by myself. It’s not the easiest task, but it’s attainable. Make sure not to drag this boat on the ground. The bottom floor construction can’t handle it. 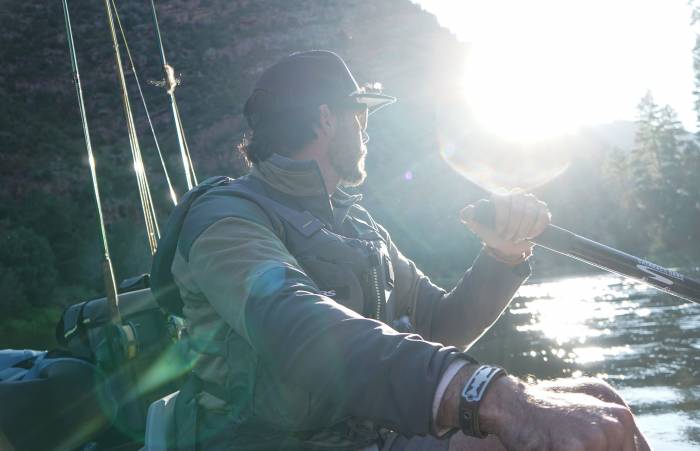 I learned to raft guide in my 20s, so being on the sticks comes naturally to me. My paddling experience allowed me to explore the Stealth Fisherman’s maneuverability. I can attest that this boat can navigate a boulder-filled river with ease in the hands of experienced oarsmen. Even in sections of water with 4 to 5 inches of clearance from the river bottom.

This boat is also a great option to teach newcomers how to oar in calmer waters. Because it’s always nice to have someone else to take the oars for a while.

While nymphing is a highly productive fishing method, I’ve preferred the “beat the banks” approach to streamer fishing. This involves a nimble craft that can stay within a 20- to 30-foot range of banks for ease of accurate casts inches from shore. 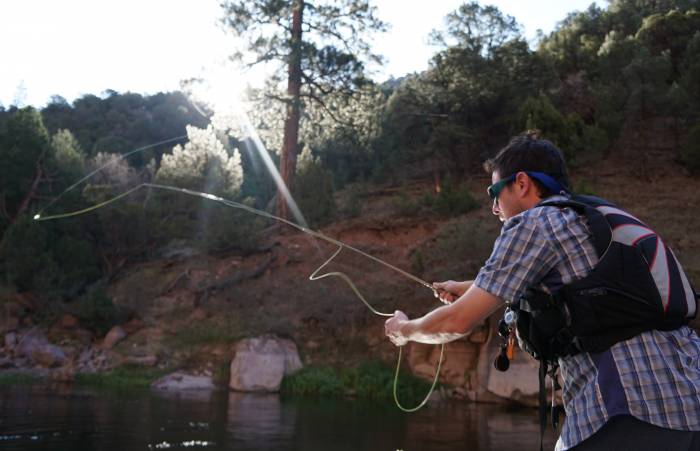 Space between the feet in the front of the boat is clear, making it a great location to strip line while tossing streamers. I’ve encountered the line getting tangled in my boots and shoes occasionally, but not nearly as much as with the fronts of other crafts.

The number of eats and fish landed are much smaller numbers but generally produce larger-size trout. The explosive nature of the bite has been incredible to experience from the front of this boat. 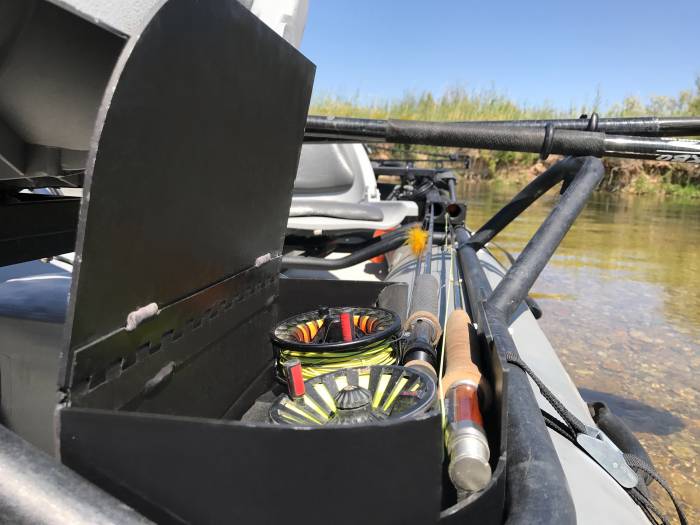 Anchoring the boat or pulling up to shore (where legally allowed) is easy. This gives the option to jump out and sight fish dry flies to a pod of feeding trout.

An accessory I’d recommend is the rod holder. This will fit two fly rods up to 9 feet long, one with a fighting butt. It doesn’t come with a locking mechanism (as pictured), and I’ve spent time padding the lid and body of the reel holder section to dampen the noise. It’s a functional accessory, but it could use a couple finishing touches.

Stability is key for the front angler. Keeping the mind on flinging flies instead of concentrating on not falling is important for casting accuracy and overall enjoyment. 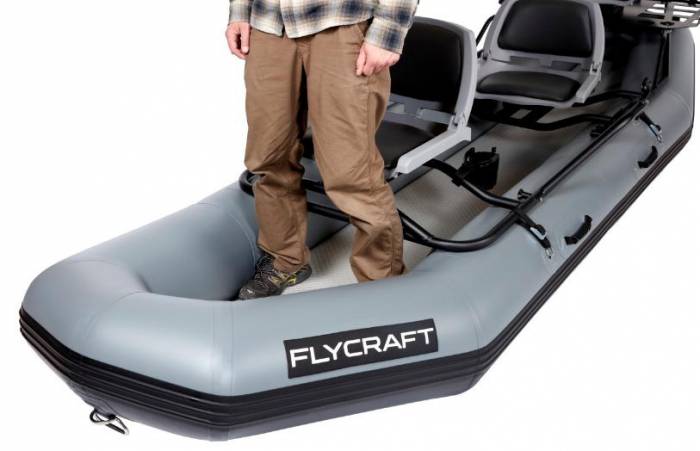 Larger drift boats have front-leaning stability points. The Flycraft front seat offers six points of contact for the angler while standing, all of which are below the knee. Contact points include the bottom of the feet on the floor, sides of calf muscles on the raft tubes, and the back of calf muscles on the lean bars built into the Flycraft frame.

Initially, I was skeptical of how stable a below-the-knee platform would be. After a year of testing the boat standing in a variety of conditions, including Class II+ whitewater, I’m impressed with the locked-in feeling. Casting in fishing conditions isn’t perfect, but I’m happy with the experiences thus far.

I used the Flycraft last fall while deer hunting in Kansas. The hunting project my brother and I worked on included floating down the Republican River near our hometown. We stashed three deer stands and climbing sticks on the boat. 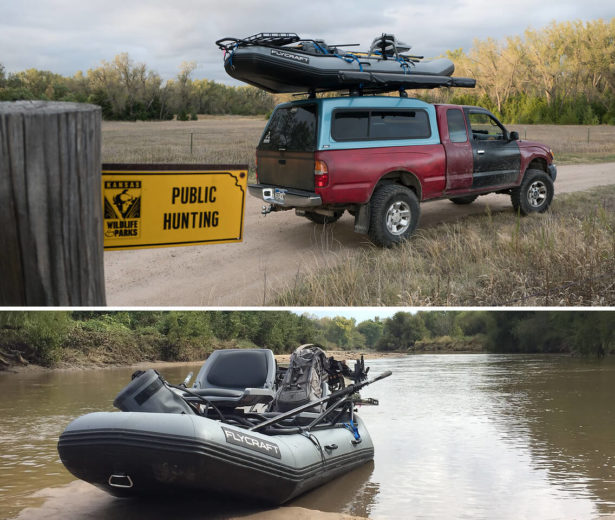 In one afternoon we floated down the river to place the stands in the timber between the riverside and fields with major deer trail systems. This minimized our time spent in the woods, therefore minimizing our scent in the areas we would soon hunt.

While I haven’t built out the blind for this yet, I’m currently designing one for the upcoming duck season. Swivel seats will allow hunters to look in any direction, and the back gear platform will work perfectly for a retrieving dog.

It’s important to note that the Flycraft is not perfect. Flycraft designed the boat as a non-bailing craft. That means that when water splashes in the boat, it stays there until you take it out.

I don’t like this non-bailing design feature. Bailing becomes difficult at times due to the floor construction. The bottom of the boat has a protective layer and a removable floor, with a small space between them.

The issue comes in when water, small gravel, and flies get below the standing floor and stay in between. Water can pool between the floor and bottom cover and take gravel and flies. These can get stuck underneath and rub or puncture the air chambers.

Stick to Class II waters and be careful with flies while fishing. For maintenance, remove the floor and wash out after every fishing trip. Follow those steps and you’ll have positive experiences with your Flycraft.

While I’m not in love with the floor design, the Flycraft has become an investment well made. The ability to transport and store the Flycraft without a trailer is a huge benefit. 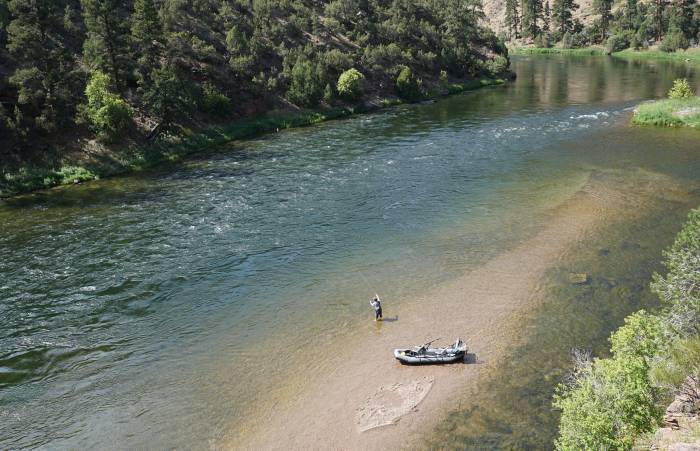 Long multiday river trips on this compact fishing craft aren’t an option, but daily or small overnight trips certainly are. And I’m looking forward to them.

If you’re an avid angler with a focus on waterways, I’d recommend having a look at the Flycraft.