Vortex improves on its Razor HD line of binoculars with the updated Razor UHD line. It takes Vortex Optics to another level.

After owning several different models of Vortex binoculars, as well as countless other brands, I was pretty stoked to get the Razor UHD 12×50 out in the field. There has been a ton of hype about these binos.

With a retail price of $2,600, I expected them to find the animal, field dress it, and do the dishes back at camp. These are not a budget buy.

I haven’t spent a ton of time using binoculars of this size, so it was a whole new experience getting them into the backcountry, in a spot where I could sit and glass for hours.

Performance-wise, I won’t even mince words; these things are incredible. I’ll get into that more later, but dang. It is hard to describe the clarity without experiencing it firsthand.

In short: To date, the Vortex Razor UHD 12×50 outperformed any set of binoculars I’ve used in terms of clarity, reach, and reduction of eye strain. I felt less need to take a break from glassing and was able to cover more ground with greater efficiency.

The breaks I did take were simply weight-strain. These suckers aren’t for the ultralight crowd and to be honest, my arms were fatigued after holding them up unaided.

Before we dive deeply into my thoughts and feelings about the Razor UHDs, let’s just take an objective look at what they are.

Without getting into too much detail on the technology, the biggest changes from the HD lineup are improvements to the lens coatings and changing the Schmidt-Pechan roof prism for the Abbe-Koenig, a larger prism with a longer optical path.

We could talk about refraction and aberration until you’re bored out of your mind, but the big picture is this: the Razor UHD line is optimized to give you maximum light refraction with minimal distortion. You get a clearer picture without fuzz, haze, or color distortion. 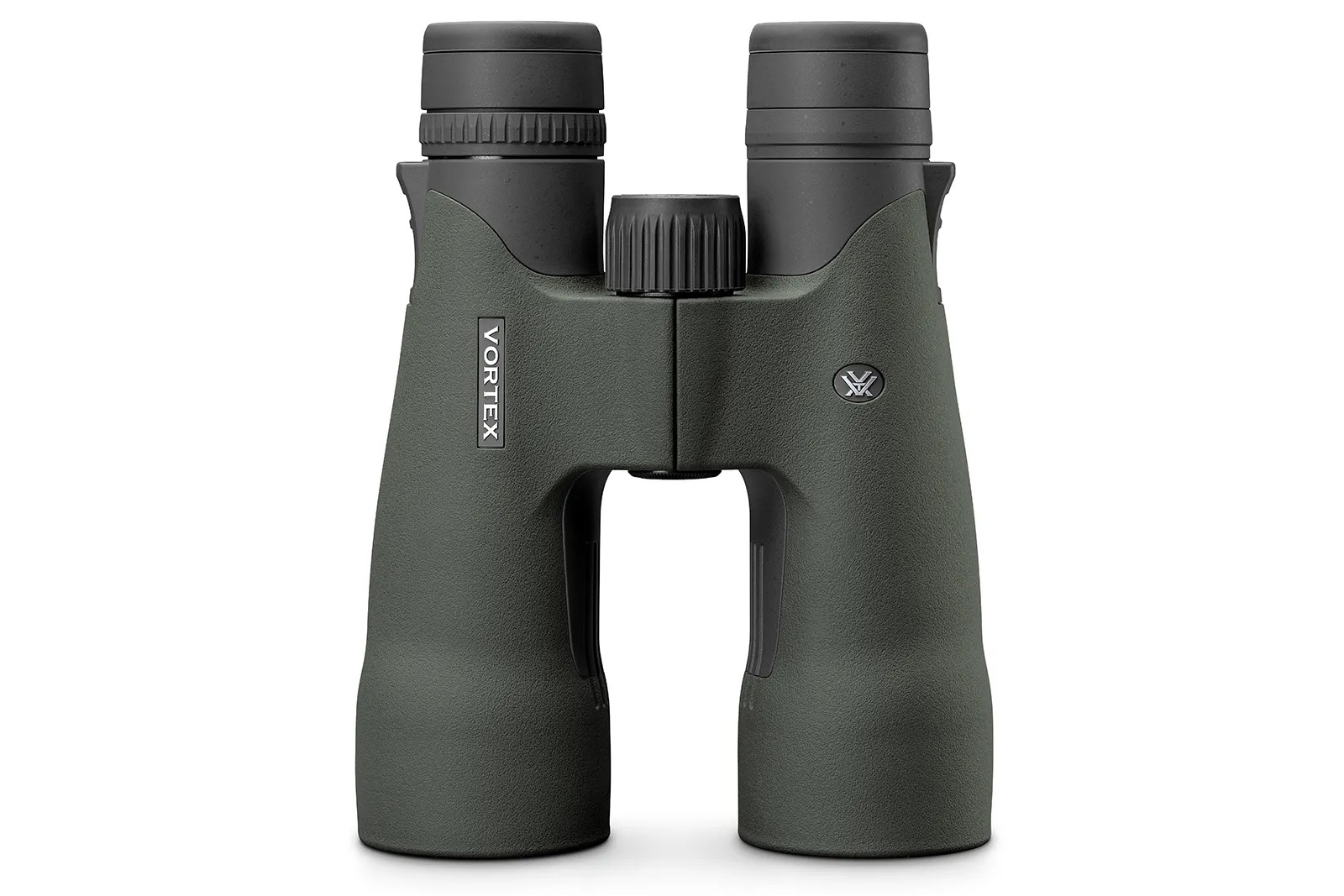 Now to the real feel. These are 12×50 binoculars. That level of magnification and objective lens size will come with some bulk. The upgrade in roof prism likely has a lot to do with that. That being said, I was not quite prepared for the mass these things have.

At 36.5 ounces, they are a full 7.8 ounces heavier than their predecessor, the Razor HD 12×50. To put that into practical terms, the Razor UHD 12×50 binoculars weigh just over 2 pounds, nearly a half-pound heavier than the previous version. That’s some serious heft.

They’re also 7.6 inches long, meaning they won’t comfortably fit in the vast majority of binocular harnesses on the market. However, Vortex has that issue covered by providing a pretty awesome harness in the accessory package, which is included with the purchase. That’s a big perk, and it’s a huge step up from some of the cheaper binocular harnesses that often come with your glass. 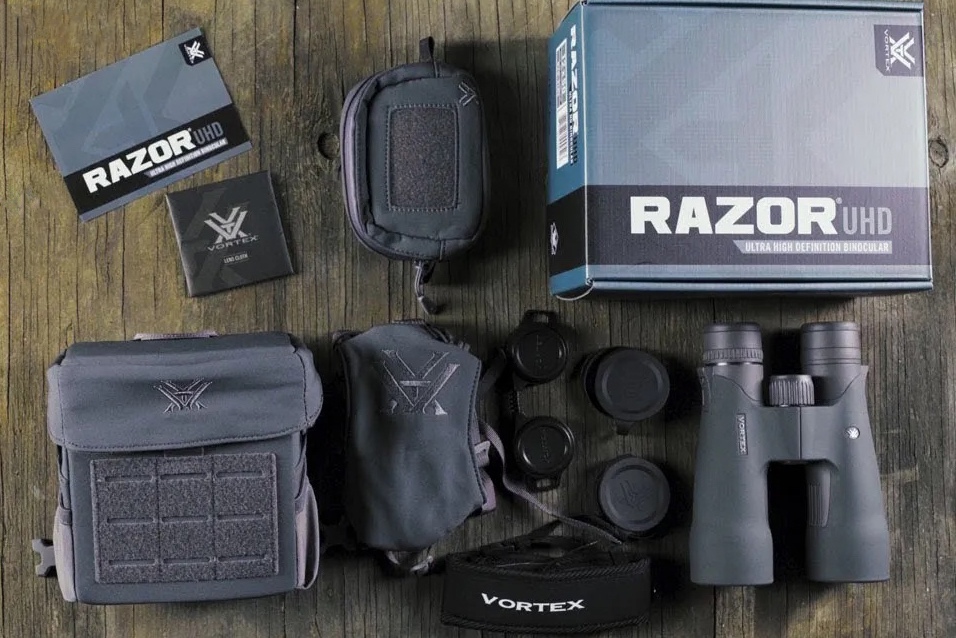 Unreal. I try to temper my excitement about performance, but this is some next-level glass. I hiked into an area where I knew I’d have some long-distance views in the hopes of scouting spring bears.

In my pack, I brought the Razor UHD 12x50s, the Vortex Crossfire HD 12x50s (borrowed), an older-than-dirt unbranded set of 10x42s that have been lying around for ages, and more snacks that any human can consume in one sitting. I picked a perch in the snow and sat with a vista of seemingly endless wilderness in front of me.

Starting with the Razor UHD 12x50s, I glassed across a far-off ridge and down a few drainages. I had perfect lighting that really maximized my viewing potential. After just a few minutes of use, I could tell they were stunningly clear, but I had no idea the extent of that clarity until I picked up the other Vortex binos.

The Crossfire HD 12x50s ($230) are great binoculars. I’ve used them on several occasions and have always been thoroughly impressed. Putting them to my eyes after spending time looking through the Razor UHDs was a mind-blowing experience.

Obviously, we are talking about completely different levels of glass here. In price alone, the UHDs cost over 11 times what the Crossfires do. But there was a night-and-day difference.

The Razor UHD binoculars are bright and crisp in a way that is genuinely hard to describe. I could differentiate between pine needles on the ridge across from me, whereas the Crossfire model offered me the ability to differentiate stems and small branches. The old no-brand pair showed me trees, albeit fuzzy ones.

One notable difference is the clarity all the way to the edge of the glass. There isn’t that hazing, blurring, or darkening at the outermost edge of your viewing spectrum. They’re just insanely clear.

I found myself not only finding bears (four different bears), but also inadvertently finding bird nests, squirrels, deer, and even what appeared to be a domestic cat perched in the skeleton branches of a birch tree.

I didn’t have the eye strain or fatigue that I always have after a long day of glassing. It really felt like the difference between putting in a fresh set of contacts or a new pair of glasses after a prescription update. The whole world was just clear, and my eyes weren’t struggling to make it all come into focus. 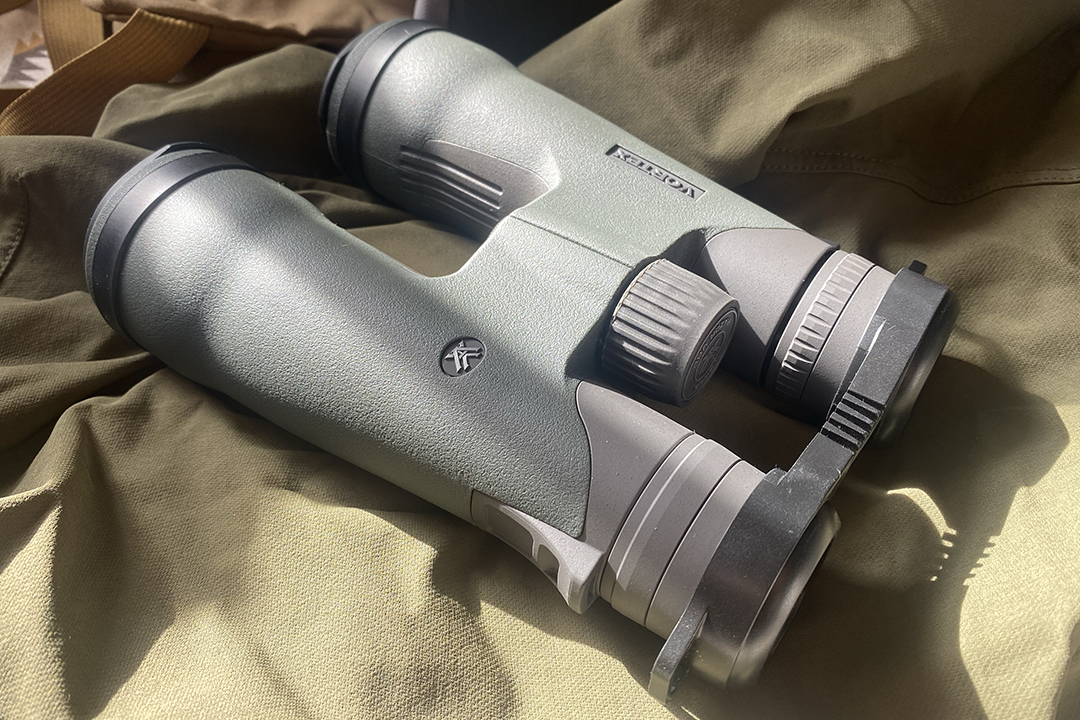 Where I’ll Use Them

These will come along with me into Yellowstone this year on wilderness guiding trips. They’re perfect for scouting animals across long distances, and I have no doubt they’ll take incredible Phone Skope photos.

These will come on every road scouting trip and on every short hike scouting trip. And, they will have their own spot on the back of the snowmobile when mountain lion season comes along.

If I ever end up on some long-range hunting trips where I’m chasing animals that are two counties over, obviously, these are the choice. Honestly, they’ll come everywhere that I don’t have to be super agile or carry them long distances.

For the serious birdwatcher crowd, save up and get them. These will take your experience to the next level. I don’t get giddy about songbirds, but I sat and watched a robin build a nest for what felt like an hour. I get it.

There are a few reasons these won’t be my dedicated hunting binos. The first is the harness. It is a great harness, and I don’t want to take anything away from it; it just isn’t mine. They won’t fit in my FHF Gear Bino Harness, and I love my harness more than I love this glass.

The reason they don’t take precedent over something as silly as a glorified chest purse is the weight. I can’t rationalize adding 2 full pounds to my chest or my pack during the heat of the season. I’m not a big human, and those pounds — even those ounces — matter to me.

If you have the budget and you don’t mind the weight, they’re darn near unbeatable. Vortex has been killing it in the optics space, and they have an iron-clad warranty, meaning you can invest in your hard-earned cash and know it’s covered if you do something stupid, like we all end up doing. These binos are exactly what Vortex has marketed them to be — and then some.

Up Next: Adaptive Athlete Runs 104 Marathons in 104 Days & More Stories to Start Your Week