It’s easy to see a coyote, a mountain lion, or a wolf as an immediate threat to local deer and elk numbers. But the insidious nature of chronic wasting disease is a far worse fate for our cervids — and the threat is real.

Chronic wasting disease (CWD) is a prion disease, which is fundamentally different from the majority of diseases we deal with. Once CWD gets into the environment, it’s there for years and possibly decades. And CWD is highly contagious and always fatal in an ugly and terrible way.

The upcoming 2020 House Agriculture Appropriations bill would reestablish federal funding for CWD by providing $15 million to state wildlife agencies for surveillance and testing. The current amount of $2.5 million does little to address the widening expanse of CWD across the United States.

To better understand how CWD works and why it needs this funding, we break down the mechanics of the contagion, what prions do to deer, and the actions hunters can take to help curb CWD expansion.

The word “prion” itself is a combination of protein and infection. Prion diseases are fairly rare and are different from bacterial infections and viruses. Understanding the vital differences in how CWD functions is key to managing the disease.

Unlike bacterial or viral diseases, prions are nonliving proteins that are structurally compromised, or misfolded. When these misfolded proteins enter a deer’s body, they bump up against other proteins vital to normal function.

In turn, this causes normal proteins to misfold and become infectious. The eventual buildup of these misfolded proteins causes terrible neurological symptoms. CWD ends in the death of all affected animals.

Once deer are infected with CWD, the highly contagious prions shed from affected deer in various ways. Healthy deer can pick up prions through exposure to saliva, to urine and fecal matter, or to any spot that another deer has left these prions behind.

Scavengers can also spread prions through their fecal matter. This has been documented in coyotes and ravens.

Prions in the Landscape

The more infected deer in one area, the more concentrated the prions in that area. This is why the domestic cervid industry and the practice of feeding and baiting are potential vectors of CWD.

A large number of deer in one area highly increases the likelihood of spread and prevalence of the disease on the landscape. 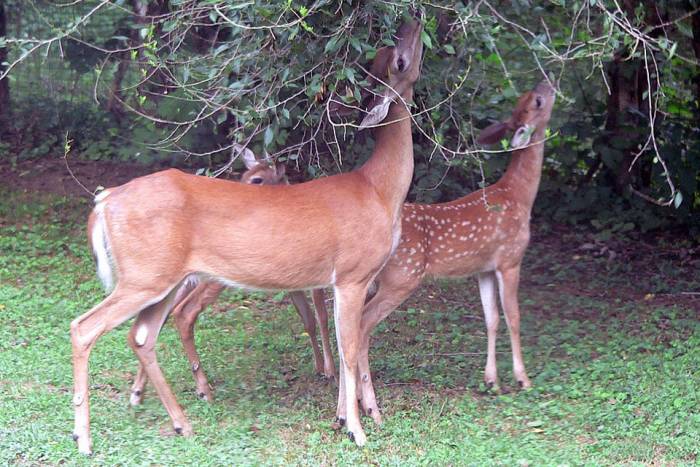 The following fact is difficult (but necessary) to understand: Unlike bacteria or viruses that generally need a host, prions are nonliving.

If an affected deer is grazing, each bite leaves prion-infected saliva behind. Those prions simply sit there until the next deer comes along and picks them up. And again begins the nefarious process of misfolding.

Research shows that prions can exist in the environment for up to 16 years, and it’s likely that we have that number simply because we haven’t done enough long-term research on the disease.

What does this mean? It means that once a particular landscape holds CWD-affected deer, the contagion lingers long after the deer have left. The land itself becomes the host of the disease. And it’s incredibly difficult to remove the prions, or, in scientific terms, denature them.

In labs, scientists denature material that’s come into contact with prions by incinerating the objects at 270 degrees Fahrenheit for 4.5 hours. And even this is no guarantee. It’s a tough thing to pull off on the local cornfield.

Simply said, the CWD prion is nearly impossible to destroy and denature once it’s in the environment.

The Disease Itself: Spongiform Encephalitis

The buildup of prions occurs over a long incubation period. Within this incubation period, deer appear entirely healthy, act normal, and consistently shed prions. At the moment, research shows that it takes about 2 years for deer to get to the point of neurological degeneration.

But affected deer have lived up to 5 years, consistently shedding the disease over the course of that time. They do this multiple times a day when eating, urinating, and defecating.

It would be ideal if CWD-affected deer experienced a quick death, but that’s not the case. Seemingly healthy deer populations can be traveling time bombs on the landscape for years.

So, how do affected deer die? The prions eventually accumulate, making Swiss cheese of the animals’ brains, and their neurological function fails.

Deer at the end of the CWD lifespan can be found intensely drooling, hanging their heads down, appearing listless, walking in set patterns for long periods of time, showing reluctance to eat, drinking copious amounts of water, urinating constantly, and suffering intensely.

It’s a death no living being should have to suffer. And it’s a fate every CWD-affected deer eventually faces. Once the affected deer dies, its skeletal system continues to hold prions. Wherever those skeletal remains go, so follows CWD.

What Hunters Can Do

CWD exists in 25 states as well as multiple provinces in Canada. Hunters likely play a part via transport of carcasses across borders. And it’s up to us to become a part of managing CWD.

This is important not only for future generations of hunters but for future populations of American cervids. The map below shows where CWD existed as of March 2017, and it’s growing. 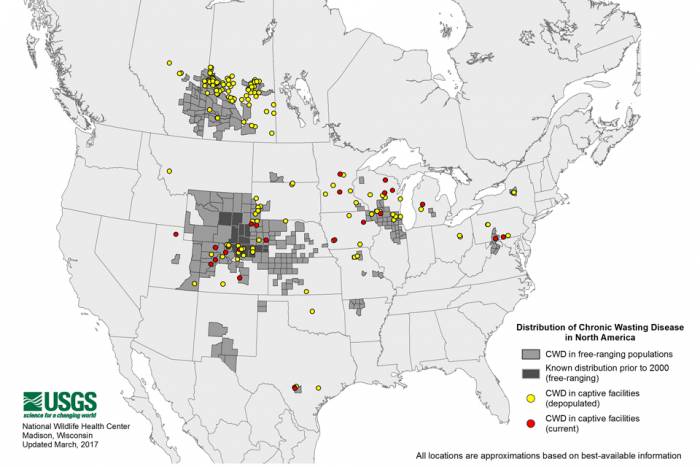 So, what are some things we can do this information?

Support your state’s management plan, even if it means aggressive hunting and culling of deer populations near positive test cases. Quantity begets quality, but quantity begets prions in CWD-positive deer.

If hunting out of state, know your regulations. You can find a list of CWD regs for states and provinces here.

Don’t bring whole carcasses over the border, be sure to bone out your animals, and get animals tested if given the opportunity.

Adjust your traditional hunting strategy. If it involves congregating deer by baiting and “letting them grow” in CWD-positive areas, consider a different approach. Listen to Wisconsin farmer Doug Duren and CWD expert Bryan Richards discuss this with both Steven Rinella and Joe Rogan.

Use onX Hunt’s CWD layer to determine whether you’re hunting in a CWD-positive area.

Read the Center for Disease Control and Prevention’s thoughts on transmission to humans, which has not yet happened but is recognized as a possibility.

What questions do you have about CWD? Let us know in the comments.

Up Next: An Affordable Ice Fishing Starter Kit for Beginners