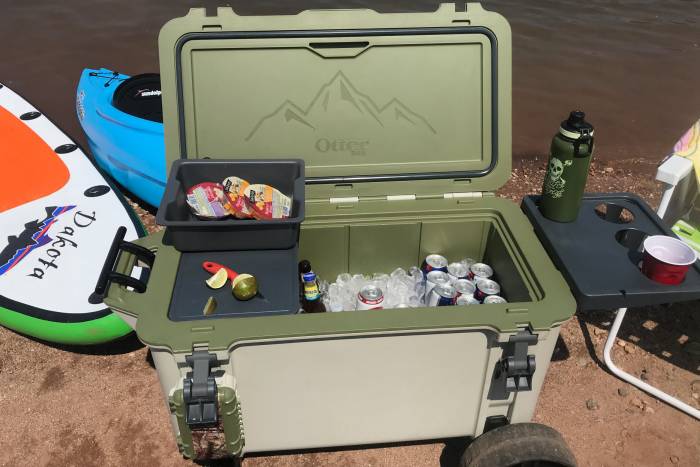 OtterBox goes back to its outdoor product roots with the Venture Cooler series. We took the Venture 65 on several multiday excursions for this review.

To test it, I took the OtterBox Venture 65 cooler to music festivals and on hunting and floating trips. I put miles on the cooler using the all-terrain wheel kit, side table, cutting board, dry storage tray, separator, and drybox.

Many people don’t view coolers as gear and thus will never justify the cost of “newfangled, expensive coolers.” That, and the fact there are no testing standards in the cooler industry, may make some wary.

And it’s extremely difficult to truly test these manufacturers’ claims when it comes to how long ice will last in real-world conditions because these vary greatly.

But to those who understand that advances in technology and construction have brought coolers out of the Dark Ages: This review is for you. 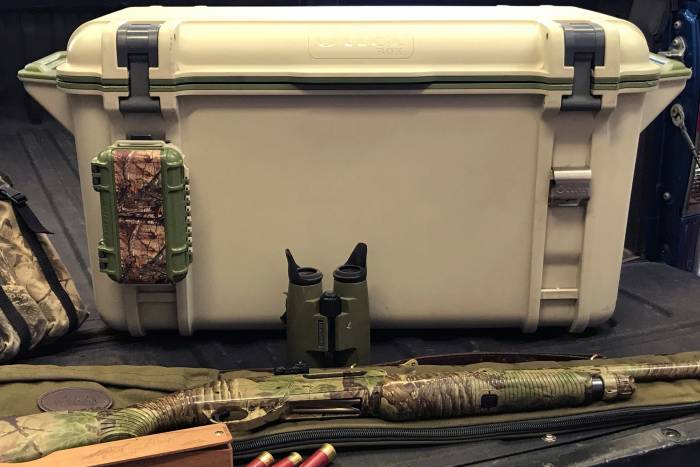 OtterBox designs and builds the Venture coolers in the USA. And they come with a limited lifetime warranty. The sizes are based on the actual capacity of the cooler, which is extremely important when doing comparison shopping.

The Venture 65 I tested had the capacity for approximately six days of food and drinks for four people, as well as ice. 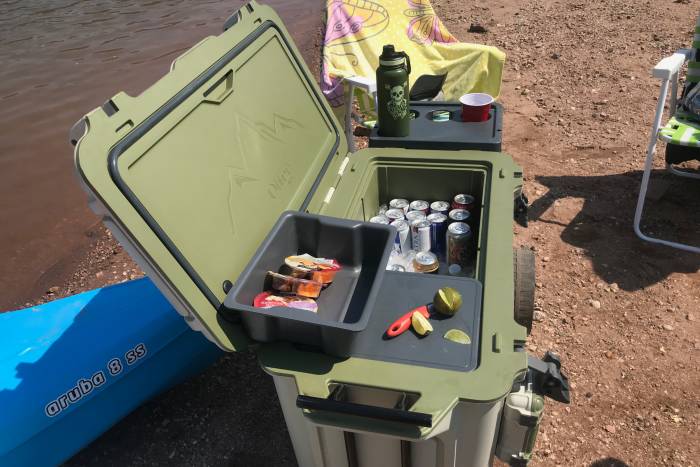 OtterBox uses injection molding technology in its cooler construction. What does this mean? According to OtterBox, this allows a more consistent product with tight tolerances, which is why its modular accessories fit every size of Venture cooler. Injection molding also adds more color options and mold labeling that won’t scratch or peel off like a sticker. 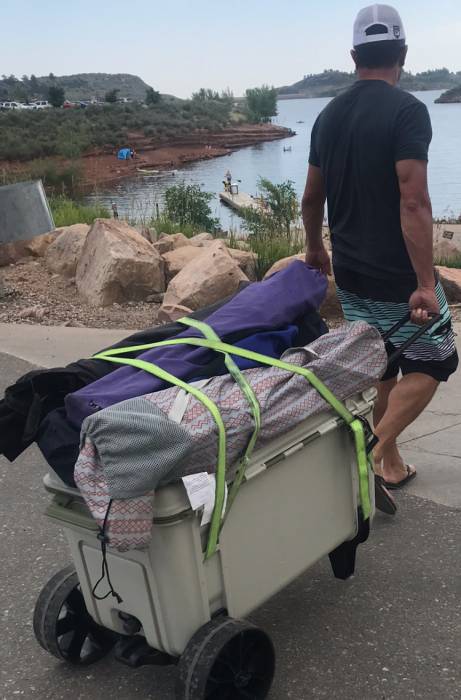 All of the coolers in the Venture line have 2 inches of refrigeration-grade foam. This is the main reason for the difference between its external appearance and internal dimensions. And it accounts for the added weight compared to traditional plastic coolers.

Two user-friendly “T” latches secure the lid opening, and a full-length hinge secures the back side of the lid.

Ergonomic handles are included in the design. When loaded, the Venture 65 definitely takes two people to lift. But those two people won’t struggle with the cooler’s weight while at a standstill.

One downside to the handles is that they do add a little over 6 inches to the total length. This required Tetris-like organization in the back of my fully loaded pickup bed and could be a concern when space is paramount.

A sloped internal floor allows you to drain the cooler without tilting it, which is useful on level ground. The drain plug is attached with a plastic strap, which could be improved. On more than one occasion, the strap came loose from the cap, which risked losing the cap.

Venture coolers are also equipped with four rubberized feet that keep them solidly in place. This is a nice touch for non-slip applications. 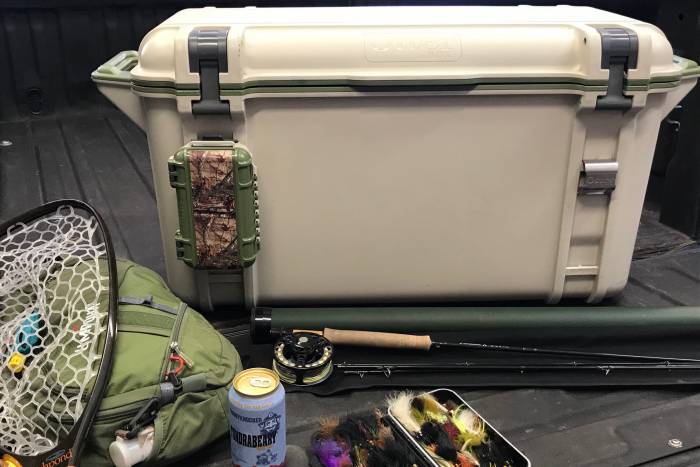 The OtterBox Venture coolers appeared durable and rugged upon the first impression. Each of the aforementioned design features was obviously implemented without sacrificing durability.

I didn’t intend to destroy the Venture: My review came from real-life wear and tear. Multiple online videos show Venture coolers being dropped out of the backs of moving trucks, getting hit with wrecking balls, and even having pianos dropped on them.

OtterBox claims that, with the addition of its locking kit ($99.99), the Venture series is certified bearproof by the Interagency Grizzly Bear Committee.

OtterBox claims its coolers can hold ice for 10–16 days (depending on size) at room temperature. Let’s face it, who leaves their cooler unopened for that long at room temperature? No one! What better way to the test the Venture’s ability to keep ice than taking it a music festival in the high desert of Colorado in mid-June?

This isn’t my first rodeo with coolers. Block ice is the name of game — it lasts much longer than cubed ice. So I loaded the Venture 65 with two blocks, one on each side of the internal separator (more on this later) and placed the cooler in full sun.

The lid was opened repeatedly during the five-day music festival. People reached in for food and beer all day and night. The cooler held enough block ice by the end of the show to keep all remaining food and drinks cold.

I never had to run and buy more ice! On another three-night hunting trip and float, I used cubed ice and got the same great results. 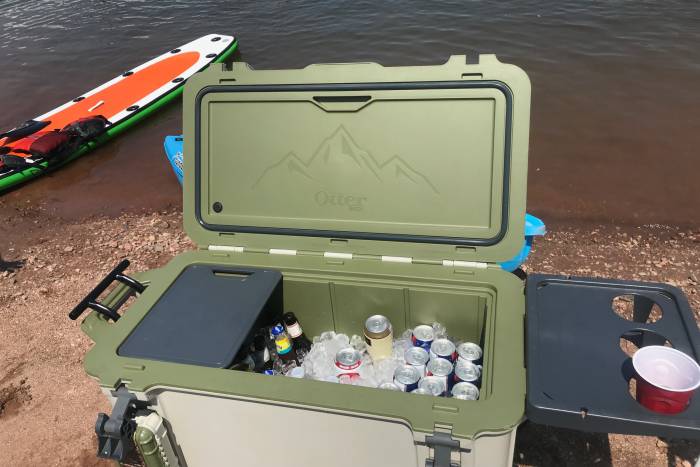 OtterBox didn’t decide to jump into the cooler market to build just another cooler. It examined past designs’ deficiencies and not only asked how it could be fixed but also considered what may be missing. Thus, OtterBox designed a complete line of modular accessories.

Let’s start with how you move a fully loaded 45- or 65-quart cooler. It’s a two-person job that sometimes turns a great time with friends into a burden. But the wheels make it easier.

Until I loaded the Venture 65 onto the All Terrain Wheel Kit ($249.99), the idea of a rolling cooler had me thinking of the average American dad dragging one full of junk food into an amusement park. Not anymore.

The wheel kit is built equally rugged as the Venture coolers. This sturdy offering is easily assembled using the included Allen wrench. The All Terrain Wheel Kit is adjustable to fit the Venture 45 or 65 and includes two 3-inch-thick, 10-inch-diameter rustproof wheels with plastic wheel bearings. The wheels rolled smoothly over a wide variety of terrain.

The wheel kit enabled the Venture 65 to become a gear hauler. With it fully loaded and a portable hunting blind and two folding chairs strapped to the top, I was ready all-day venturing (see above).

The terrain was uneven, slightly rocky, and without a clear path. I was extremely cautious as I started out. But with every few yards, I became more confident the OtterBox Venture wasn’t going to tip over, even with all the gear piled on top. The design of the kit puts the wheels to the side of the cooler, so the weight maintains a low center of gravity.

The side table ($69.99) was a welcomed addition on my turkey hunt. Keeping food off the ground and drinks from spilling was a major bonus, but it was a bit clumsy to carry around. And although it does fit inside, it takes up way too much space to go inside the cooler when loaded up with food, drink, and ice.

The aforementioned separator ($24.99) allows for a much more organized cooler, which was helpful because of the Venture 65’s size. In fact, I would recommend two separators for anyone purchasing a 65.

The cutting board ($29.99) fits neatly inside the upper groove of any Venture cooler and also fits perfectly in the rim of the side table. The external drybox ($49.99) is mountable to four different locations on the Venture coolers. It’s completely waterproof to 90 feet and has an interior foam that protects the contents. It provided a great place to stash my phone, keys, and wallet.

The Venture series and accessories are smartly designed and highly durable. The ability to avoid wasting time to replenish ice, as well as money on ice and spoiled food, makes the Venture coolers great selections in the overwhelmingly populated cooler market.

OtterBox hasn’t perfected the cooler. But, with its modular design, it has made strides in what a cooler can be.