Home » Outdoor » ‘The Next Everest’ Book Review: Surviving the Quake, Returning to the Summit

Earthquakes, avalanches, fear — author Jim Davidson recounts it all in his harrowing new book, ‘The Next Everest.’ Read an exclusive book review and Q&A with the author here.

Jim Davidson had over 30 years of experience as a mountaineer and trip leader when he went to Mt. Everest in 2015. Nevertheless, experience is no match for the mountain. Davidson and his team were near the summit when a 7.8-magnitude earthquake shook the plates beneath them. Davidson endured a near-death incident and widespread panic on that unprecedented day.

And now, he’s documented his story. This book is a big deal, not just for the author, but for so many across the world who have continued to follow Mt. Everest news and Nepal’s struggle with tourism post-earthquake.

We got an advance copy of the book, and an exclusive interview with the author, to bring you more of the story. There’s even a movie — er — book trailer you can watch if reading an author Q&A isn’t your jam.

‘The Next Everest’ Book Review 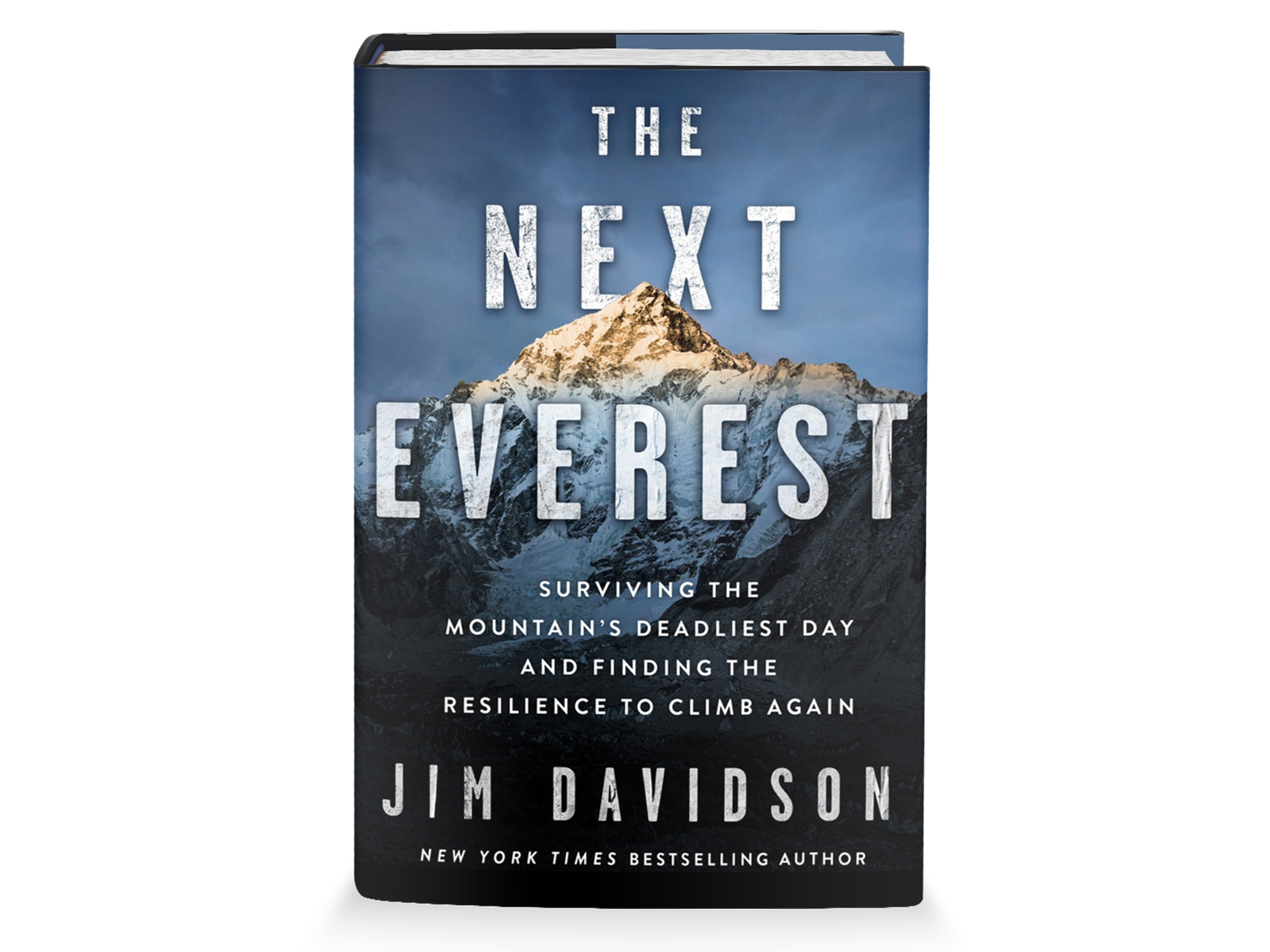 Book summary: On April 25, 2015, Jim Davidson was climbing Mt. Everest when a 7.8-magnitude earthquake released avalanches all around him and his team, destroying their only escape route and trapping them at nearly 20,000 feet. It was the largest earthquake in Nepal in 81 years and killed nearly 8,900 people. That day also became the deadliest in the history of Everest, with 18 people losing their lives on the mountain.

After spending 2 unsettling days stranded on Everest, Davidson’s team was rescued by helicopter. The experience left him shaken. And despite his 33 years of climbing and serving as an expedition leader, he wasn’t sure that he would ever go back. But in the face of risk and uncertainty, he returned in 2017 and finally achieved his dream of reaching the summit.

Our review: “The Next Everest” portrays Davidson’s experience of living through the biggest disaster to ever hit the mountain and his return to summit the world’s highest peak. This book isn’t trying to exaggerate the danger of Mt. Everest — it doesn’t need to. Davidson’s personal account — from his first memory of the world’s tallest mountain (age 10) to his first day on the trail to Base Camp to the first roar of the avalanche — is real and gripping all on its own.

Details Davidson includes — like the thoughts running through his head as he stepped onto a snow bridge, or clipped into a fixed line, or what different magnitudes of earthquakes feel like — make this book really shine.

Not only does Davidson detail his experience on Mt. Everest in 2015, but he also provides necessary context — context on the Sherpa people, historical accounts in years before (and following) the 2015 earthquake, who was on the mountain, and more.

The result is a vivid picture of Mt. Everest during peak climbing season, and its significance to the locals, to guides, to visitors — and its vital role to the greater country of Nepal.

The timeline does skip around quite often, but thankfully Davidson roots himself into each story, becoming the focal point, the character you can’t help but intensely follow. Davidson’s interest in adventure and sense of curiosity, an urgency like something is about to happen on the next page, also helps the reading flow over this 400-page tome. (We read our copy in a single week.)

Why read: If you are looking for a thrilling, first-person account about adventure on Mt. Everest.

“We climbed the Deadliest section of Everest at night. The jumbled icefall we struggled through rose more than two thousand vertical feet in a mile as we ascended from base camp to Camp One. …

Darkness made it harder for us to pick our way through the shifting ice maze. But the deep nighttime cold slowed the Khumbu Glacier’s movement, which reduced the chances of frozen walls collapsing on us or avalanches burying us. At least, so we hoped.

I tried to hurry through the Khumbu Icefall but could only lumber uphill like a tired old yak. Whenever I stopped, my achy thigh muscles regained some strength, but after just a few more steps, my pace decreased once again. Even though I was in the best climbing shape of my life, my oxygen-starved legs just couldn’t move any faster in the low-density air at nineteen thousand feet.

It was my first day climbing Mount Everest, and already the chaotic landscape and self-doubt had me awash in uncertainty. With a few hours left until we reached Camp One, we pushed deeper into the icefall.

Light from our headlamps bounced off the gleaming ice walls. Dancing shadows sometimes made the glacial blocks look like they were moving. About half of the other fifteen climbers and fifteen Nepali guides, known as sherpas, on our team climbed above us in the tangled icefall; the rest followed behind.

A guide moved along with each team member. Most of the climbing sherpas we hired were of actual Sherpa ancestry, but a few came from other ethnic groups, like Bhote.* Including our two senior American guides, thirty-two of us ascended the dark icefall, along with people from other teams. Every few minutes, the jittery sweep of someone’s headlamp marked the way ahead.”

Q&A With the Author, Jim Davidson

What was the hardest part of climbing Mt. Everest?

There are two hard parts: preparing and enduring. The preparation for Everest should not just be a rushed program of acquiring the minimum skills and racing to the Himalayas.

Preparing for Everest should include many years of refining the numerous skills needed, developing robust physical and mental fitness. As I emphasized in “The Next Everest,” if you want to be safe and successful at high altitude, you need to understand both the mountains and yourself very well.

Staying healthy, positive, and engaged during long expeditions can be hard. Going from Colorado to the top of Everest and back home again [in 2017] took me 66 days. Sitting through days or weeks of bad weather in a cold tent at altitude, you’ve got to have the fortitude to endure and the resilience to bounce back.

What was the hardest part of recounting your story in this book?

I wanted the reader to feel like they were right there in the tent with me, at 19,700 feet, when the earthquake rattled the Khumbu Glacier beneath us. I needed them to hear the two massive avalanches rushing down thousands of vertical feet toward us like runaway trains. To bring those sensations to life on the page, I had to relive some terrifying moments.

I also had to reveal the sadness in base camp after [learning] 18 people died, and to try capturing the grief of a nation. I struggled to produce those sad sections. But, looking at our losses and distilling the strength to move forward is what makes us stronger and more resilient for the next challenge ahead — the next Everest.

After enduring the earthquakes and avalanches in 2015, I was not keen on returning. As a geologist, I studied the seismology reports and was shocked to uncover that not only was another quake possible, it was inevitable. And, it [would be] a big tremor due to all the unmet seismic movement deficit that had built beneath Nepal.

But the Nepali people desperately needed tourism and mountaineering to stay afloat as they rebuilt the country. And I still wanted to try climbing Mt. Everest. So, after a long pondering of all that mixed data, I decided in 2016 I’d return. I felt nervous, of course, but excited to try again.

Tell us about your mountaineering background.

My eyes [were] opened to the mountains when I started backpacking the Appalachian Trail in 1981. While I enjoyed the rolling New England peaks, I knew that I needed bigger mountains. So, I went west in 1982, learning how to rock climb and ice climb while working on my undergraduate geology degree in Bozeman, Montana.

As my career in soil and groundwater cleanup grew, I spent about 16 years honing my mountaineering skills across the Rockies and Pacific Northwest (Mt. Rainier, etc.) before stepping up to expedition climbing in 1998, summiting about two dozen peaks in the 16,000- to 22,000-foot range.

You’ve also worked on rescue missions on several occasions, is that right?

Yes, though I never joined a formal search-and-rescue team. I have always been trained in first aid and avalanche awareness so that I could be as safe as possible. During my 39 years of wilderness travel, I have been a first responder on about 10 significant incidents (as well as lots of minor situations).

The hardest ones involved managing serious injuries for an extended period (18 hours high up on Longs Peak) or in an extreme situation. In “The Next Everest,” I revealed what these experiences are like by describing a makeshift rescue I volunteered for at 19,200 feet on Denali.

What was your first mountaineering expedition?

My first noteworthy summit was a winter climb up Mt. Washington (6,288 feet) in New Hampshire. Though modest in height, it has ferocious winds and serious winter conditions, so it was a good initial training.

My first 14,000-foot summit was Longs Peak via a technical route in 1985. My favorite climbs are remote routes up high, icy peaks in Rocky Mountain National Park.

How long did it take to write this book?

I needed 2 focused years to write “The Next Everest.” In addition to my family and climbing, I had my speaking career, so I [was] strict to carve out writing time every week. Editing and revisions took another 6 months. The effort was worth it, though.

This interview has been edited for readability and clarity.

Check out these five books that will make great outdoor reads in 2020. Read more…

Up Next: Barkley Marathon Mastermind Lazarus Lake to Appear on HBO’s ‘Real Sports’