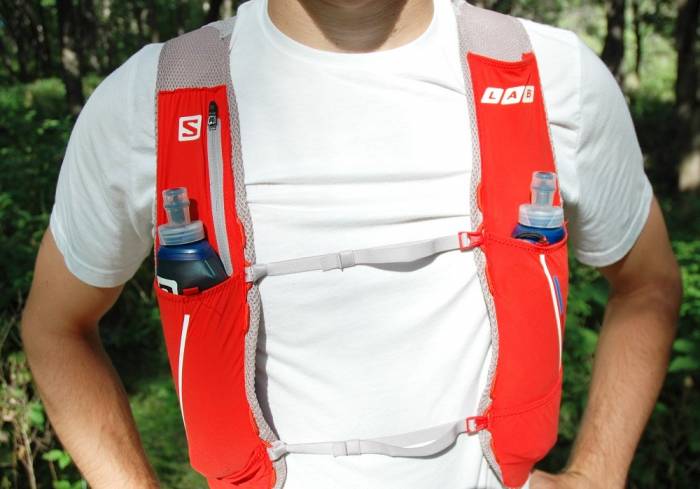 While running long distances through forests, mountains, and on trails, every ounce counts.

I tested the lightweight S-Lab Sense Set vest from Salomon, and was shocked knowing I had an entire liter of water on me. It carries the weight and volume like a second skin.

For the uninitiated, a running vest blurs the line between backpack and shirt with storage and hydration units fitted onto the pack as minimally as possible. Totaling 3.17 ounces, this vest probably weighs less than most of your shirts.

The concept is nothing new for Salomon; the brand has made running vests for several years. Our editors have used them extensively over hundreds of miles.

The S-Lab Sense Set model launched in 2015, and many of the brand’s pro athletes still use the same vest, which was moved unchanged into the 2016 line.

The result is a sleek vest/pack covering the upper torso that fits like a snug shirt. It’s made of soft fabric that does not rub or chafe. A mesh design gives great breathability, adding almost nothing onto your back.

This pack eliminates the distraction that gear can cause as the miles add up. I ran 25 miles on flat terrain and vouch heavily for this product. It keeps up with the minimalist nature of running and helps facilitate the focus between yourself and the trail.

I packed two 500ml soft flasks, my car keys, an ID, credit card, and two protein-nut bars. With all of this on, it still surprised me to think of how much I was carrying. Unadulterated running is an understatement.

Phone, food, and water are easily accessible on the go.

If one liter of water doesn’t sound like enough, there is room in the pack to bring two additional 500 ml soft flasks in the rear storage areas. It does not have the single large back pocket of some heavier models, and isn’t designed to carry a hydration bladder.

This totals your hydration to two liters, with enough additional space for minimal gear and food. Those who need to carry a light jacket, hat, gloves, or space blanket for mountainous or remote terrain will want to look at more spacious options from Salomon or other brands.

The Camelbak Ultra 4 comfortably can carry a gallon of water for trail runners on self-supported, remote terrain. Read more…

The compressible 500ml soft flasks that come with the pack are susceptible to some bounce with your gait. They have mouthpieces that suck water and air out without bringing it back.

Instead of sloshing water (like in hard bottles) or the bounce you get from an on-the-back reservoir, the extra water below your pecs adds some momentum and bounce.

It’s a minor disturbance, and really the only “noticeable” thing about this vest as you run. I quickly got over it and was able to focus on the reason I was out there: To run, fully hydrated the whole way. 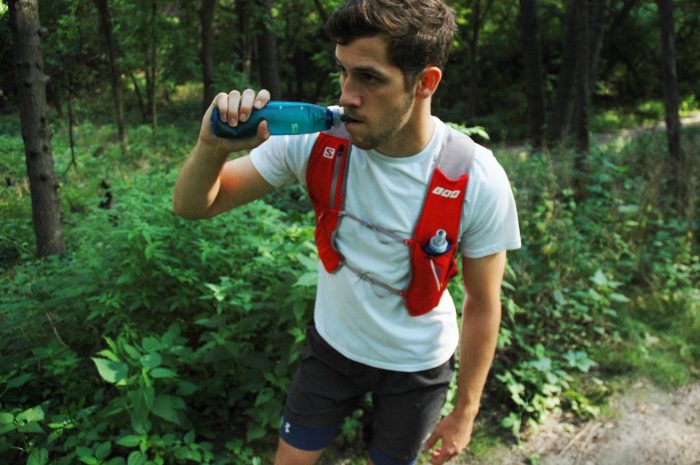 Up Next: ‘Time To Play’ Giveaway: 25 Pairs Of Salomon Shoes