123 days on the trail with no flashlight. Gene Espy, the 2nd thru-hiker to complete the 2,190-mile Appalachian Trail, shared tales from his 1951 hike with us at the Trail Days Festival in Damascus, Virginia. 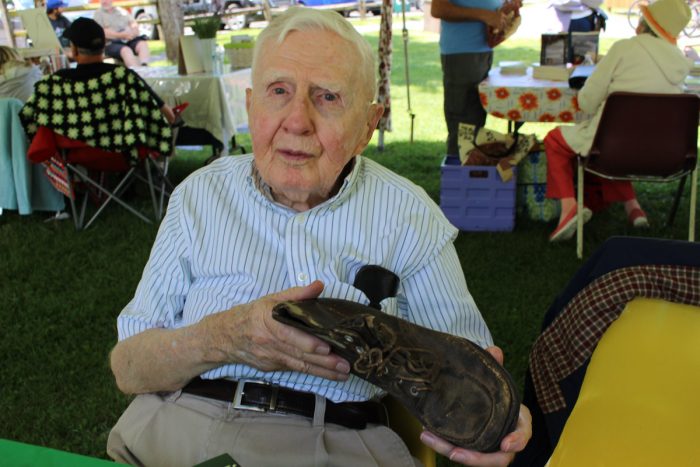 Damascus, a small town with a population of 815, is self-proclaimed as “The Friendliest Trail Town.” The locals rally for a full week each year, throwing out the red carpet for AT hikers who’ve walked 469 miles from Springer Mountain, Georgia, to get here for the biggest party on the trail — Trail Days. Convenient enough, the trail goes right down Main Street.

GearJunkie contributors Lindsey and Adam Nubern visited the Trail Days festival as part of the Mobile Office series; all powered by EnerPlex.

The festival is every hiker’s mirage in the distance. AT hiker Ariana said, “I was counting down the miles to get new hiking shoes!” The town offers free gear from vendors, free showers, free food, free shuttles around town, free haircuts, free medical exams, and even free foot massages. 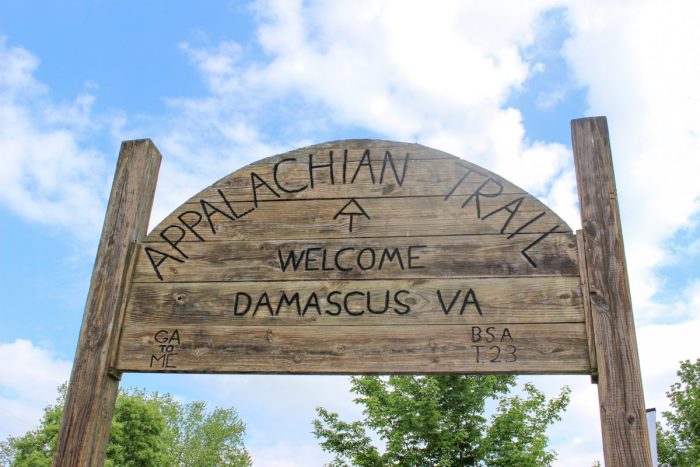 Most importantly, the festival is the biggest gathering place for hikers and their trail families. Everyone hitches a ride to get to Damascus; whether they haven’t made it on foot yet or they’ve already passed through and are further north on the trail. Alumni thru-hikers come back to meet old trail friends and reminisce.

Gene Espy is a legend on the trail and was first out in the Hikers Parade on Saturday afternoon. We jumped at the opportunity to talk to and learn from Gene.

Gene had just finished college in 1951 at Georgia Tech and had heard about the “government’s trail” from Georgia to Maine while out hiking. The trail was completed fourteen years earlier in 1937.

A friend from boy scouts joined Gene for the first several miles but complained about the heavy pack and the rough trail. When I asked Gene his feelings when his friend turned around and went home, he replied, “I was happier without all the complaining and knew I’d make better time on my own.” He quickly became a college grad alone in the woods without a flashlight and only the second person to attempt the government’s 2,190-mile thru-hike.

Only minutes into his stories, our eyes widened as he pulled the antique gear from his 1951 thru-hike. We gasped at the introduction of each piece. An old worn, leather hiking boot; his inflatable pillow (to keep it inflated, he had to knot the straw); his collapsible aluminum cup; and his carbide lamp used for light.

Gene claims he’s the only thru-hiker he knows to never use a flashlight on the trail, and he’s probably right. Miners used carbide lamps and the light is created from a chemical reaction of calcium carbide pellets and water.

Sharing stories from the trail, our backs felt heavy sitting in our chairs as we heard “steel frame pack” and “25 caliber pistol for bears.”

His pack weighed 50 pounds, and after hearing his 1950s gear list we have no room to complain. Back then, plastics weren’t widely manufactured yet. Ultralight Cuben Fiber technology was decades away.

Gene only carried enough food for one week at a time. His grocery list always included chocolate pudding; two loaves of bread; three different jars of preserves to be swapped for each meal; corn meal with sugar, milk and raisins; and Hershey and Babe Ruth bars. His only contact with the outside world “was reading the ingredients on the candy bar when I was sitting on top of the mountains seeing everything all around.” 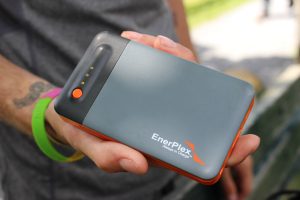 These days, hikers compare what powering systems one another carry to keep their cell phones and cameras charged to text, call, and take pictures on the trail. AT thru-hiker, Jordan, was eager to see what GearJunkie’s Mobile Office is using. He uses EnerPlex’s Jumpr Stack 6 and Kickr IV while out on the trail.

The two pieces of gear Gene Espy always kept close in his shirt pocket were a collapsible cup to have a dip of water and his snakebite kit. He claimed to have killed at least twelve snakes along the way but never used his bite kit. His hiking staff lost a foot in height on the trail from killing a timber rattler in North Carolina.

His most important piece of gear: “I guess it’d be my guide books.” These he stashed under his hat for safekeeping.

His biggest gear mistake: A mosquito net. He was either burning up in his down sleeping bag, or “gettin’ carried away by skeeters.” So, he got off trail to hitch a ride into Helen, Georgia, to get a mosquito net.

Gene’s biggest piece of advice to thru-hikers: “Get your gear situated and take it for a three-day shakedown hike. You’ll see if you have too much or not enough.” Any backpacker spending a night out in the woods could take this piece of advice no matter what decade you’re hiking in.

Read more about Gene’s gear and his stories as a pioneer on the Appalachian Trail in his book The Trail of My Life.

— Our mobile office series is powered by EnerPlex. Here’s what it takes to work from anywhere.

Up Next: Two Months In The Desert: ‘Ace And The Desert Dog’