Our goal was to bike across the country. But our route turned into a tour of America’s roads less traveled, and it’s definitely made a difference! 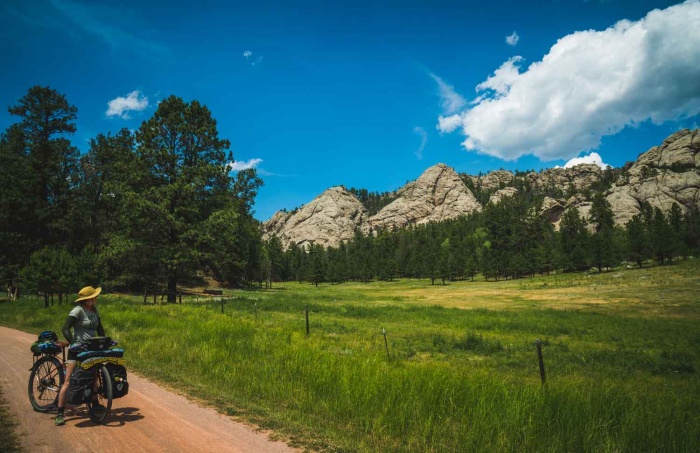 Sitting on a hotel bed in Keystone, S.D., my eyes searched the lattice of backroads displayed on a computer screen. Where would we bike tomorrow?

There are a lot of set ways you can bicycle across the country, but my bike partner and I have always been a bit outside of the mold. Planning a unique route put us on some bad roads in the past 2,800 miles. But we’ve seen some incredible places that few ever witness from the saddle.

Where The Heck Are We Now?

Our goal for this year’s Packing It Out tour was to cross the U.S. from east to west. But that doesn’t mean it’s a straight shot. Indeed, our path is a wandering route.

This was largely by choice and gave us the freedom to adjust the route as we go. But this last leg was tricky.

We had a little over a week to bike to Boulder, Colo., from our last stop in Minneapolis, Minn. I scoured bike touring forums, Adventure Cycling’s archive, but every search came up empty.

“No one bikes where we are going,” I sighed as I began to painstakingly scroll through inches of dirt roads on Google Earth. The first bit would be easy, the Mickelson Trail is a rails-to-trails path that headed straight south through the remaining Black Hills.

Once we emerged back onto the plains, the directions got a lot less straightforward. The plan was to head south into Nebraska, crossing into Wyoming before heading south.

“We’ve got to get there somehow,” Seth said as we shut off the electronics. We opted to enjoy the night rather than look for better options.

Trying to be good tourists, we cycled up the hill to Mount Rushmore to see the night lighting. We got spooked by all the traffic and opted to stash our bikes in the forest and scramble a spire to watch from afar. The mountain lit up suddenly as “America the Beautiful” drifted through the trees. Tomorrow, we would be biking again.

After a short climb to Hill City, we got on the Mickelson Trail. To date, this is my favorite rails-to-trails route. The 60-mile section wrapped around the Black Hills, passing by piney forests, noble rock faces, and wide plain views all on packed limestone.

After Custer, things start to feel remote. The remaining small towns along the way are husks compared to their hey-day as railroad towns.

The trail ends in the quiet town of Edgemont. We took a break there, in the park, and watched the occasional cyclist finish the trail, get into cars, and drive away. Soon, it would be time for us to leave too, and we packed up our bikes as the wind picked up and the sky darkened.

We pedaled away as the storm sirens started to scream. 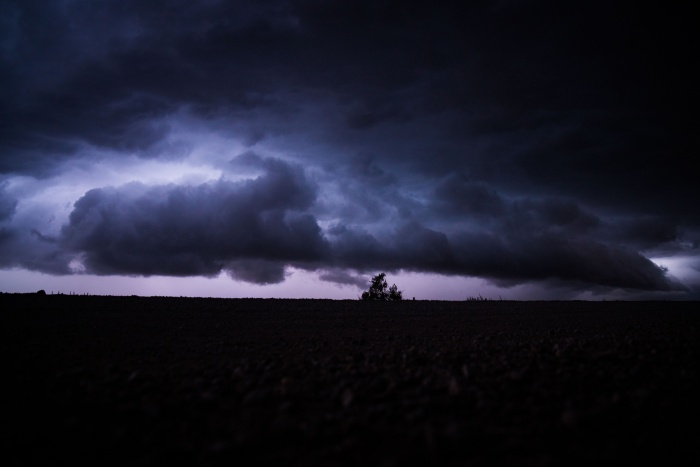 Not long outside of town, the road turned to gravel. We began climbing a long hill, occasionally glancing back at the wall of thunderheads marching toward us. We cut our mileage short, realizing we would need shelter soon, and pitched our tent next to the dirt road.

The first rain drops hit as we tightened the last line. We huddled in the tent, coughing as the winds stirred up all the road dust and forced it through our screen doors. Soon enough, the dust turned to mud as rain began to pelt the tent. We piled panniers inside to keep the walls from blowing in. Knowing what the road looked like ahead, we tried to get some sleep.

When we awoke, the sky was clear and blue. The road was baffled, loose dirt piled into hard washboards. My teeth and elbows chattered as I tried to maintain any speed. My tires washed out. The sun roasted us from overhead.

We pedaled on into Oglala National Grasslands, blue skies and green earth stretched out seemingly forever in either direction. Pronghorn leaped across the horizon, we spooked a badger running along the road, prairie dogs stood atop their mounds, barking as we passed.

For a place so seemingly desolate, it teemed with life. The grasslands gave way to strange formations before rising into the unexpected, hilly forest of the Gilbert-Baker Wildlife Area. Out of water and feeling torched, we dunked our water bottles and shirts into a pond. It only tasted a little like algae.

We reached Harrison, Neb., that night, an oasis of hospitality. We ate cheeseburgers and slept like rocks. The following morning we headed out for our next destination, Torrington, Wyo.

The pavement ended much too soon, and immediately began to degrade. The road was so loose I couldn’t go for more than a few hundred feet without meeting an impassible, tire-swallowing section. Soon, I couldn’t pedal at all, my feet sinking into the dirt as I pushed my bike. I tried to comfort myself, “Only 12 miles until this road becomes paved again,” and promptly cried.

We took a break under the only tree we’d seen for hours. A farmer passed by and called out.

“Do you know where you are?” he asked. Unfortunately, yes. “Well, what the hell are you doing out here?” We gave him what felt like an honest answer.

Then we pushed hard through the sun and headwinds and made it to Torrington. We did the same thing the next day and made it to Cheyenne, eventually, we even made it where we needed to go: Boulder, Colo.

Seeing the Rocky Mountains emerge on the horizon and slowly grow was such a gratifying feeling. Often I had wanted to give up, to lay in the dirt and scream.

These remote, inhospitable environments will test you. It will take all the strength you have, but then show you that you have a little bit more.

We’ve still got a lot of miles before we finish this trip, and while there are a lot of unknowns, I think it will be pretty hard to top the outrageousness of this last section.

Again, I can only trust the road, and the strength in my own legs, and pedal on.

–Our 2017 ‘Packing It Out‘ coverage is sponsored by REI. Check out the crew’s 2015 and 2016 efforts on our ‘Packing It Out’ page. Connect with Abby and Seth on Instagram, Twitter, and their blog.

Up Next: River Yields ‘100 Pounds Of Trash Per Day’