Thicker steel, durable designs, and intentional increases in bulk and weight (including one bottle that weighs almost 3 pounds) are key to Stanley’s 2017 product line. 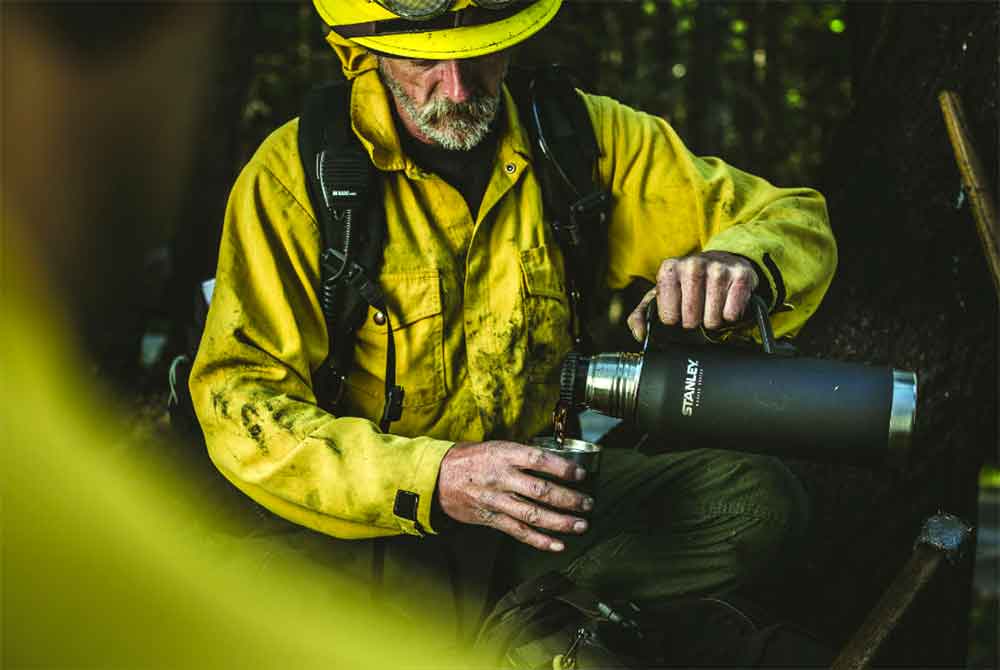 The clang of bashing metal rings through the conference room. It’s a Tuesday morning in Seattle, and Stanley’s director of global product management swings a prototype insulated bottle against a metal growler.

He is making a point. Eric Shear, Stanley’s zealous product manager, set the growler (a competitor’s brand) and the matte-black Stanley “Master Series” bottle onto the table. The growler was mangled and deformed. The bottle didn’t have a scratch.

The demonstration was part of a sneak peek at the brand’s 2017 line – in short, Stanley is bulking up its summer bod with what it dubs the Master Series: heavier, burlier vacuum-insulated vessels.

The upcoming line won’t ship until next year. It consists of a 1.4-quart vacuum-insulated bottle and cup; a 25-ounce bottle and cup; and an 18-ounce travel mug. Each is noticeably heavier than its Classic Series predecessor.

The heft comes from thicker steel. The Master Series uses 1mm-thick stainless on all products, while the thickest Classic Series uses 0.7mm. The extra 0.3mm may not sound like much, but it makes a difference in durability.

Shear’s dramatic exhibition in the conference room illustrated the durability. But to demonstrate it in scientific terms, Stanley later performed what’s known as a “deformation test.”

Basically, a Stanely engineer dropped a 15-pound “missile” onto the bottles from various heights, then she measured the damage.

The results? The 0.7mm steel bottle suffered a 10mm-deep dent from a missile dropped at 200mm. The 1mm steel showed half as much deformation (5mm dent) when the same missile was dropped from twice as high (400mm).

Inside, the MS bottles and mugs outlast the old guard in thermal retention, the company states. Where the existing line could keep beverages hot up to 28 hours, coffee in the new bottles lasts up to 40 hours.

The Future Is Heavy

Fans of the century-old Stanley brand might wonder why the company, which has staked its name on lifetime guarantees on all its products, would emphasize even longer-lasting products.

According to Shear, the new product line is meant for professionals working in extreme conditions who need items that can take “unbelievable punishment.” The company’s promotional materials show the Master Series used by Wildland firefighters.

But Stanley is also responding to a growing industry trend – durability and substance. Whereas once market research suggested that consumers demanded lighter weight, more affordable camping accessories and drinkware, now all signs point to heavier and bulkier cups, coolers, and growlers that are literally worth their weight. That is what Stanley cites as justification for the increased bulk in the 2017 line.

“I can’t imagine that any kind of shopper/user study would have indicated people would spend 10 times more for a cooler regardless of durability,” Shear said of YETI’s trademark “tough as nails” business model. “Yeti must have realized there was… a market for something radically more durable; they took some chances, and now it’s known – after the fact – that they had their finger on the pulse.”

We’re curious to see if Stanley’s bulking up will resonate with consumers. We will update as soon as we have the chance to test the burly new VI mugs and bottles later this year.

Although the new line comes at a higher price, ranging from $35-$65, the enhanced performance and durability could be worth the investment for those living and working in harsh conditions.

Tough gear is preferable to lighter weight gear in many circumstances. Stanley’s Master Series launch will be a litmus for just how burly the outdoor industry can go.