If you’re in the market for portable power, you’re likely shopping brands like Goal Zero, EcoFlow, and others. But you should also take a look at Blackfire.

But recently, a handful of Klein product developers — also adventure enthusiasts — helped launch an outdoor-focused gear sub-brand. Blackfire hit the ground running over the last year-plus with a wide array of products built to enhance fun outside: knives and multitools, headlamps and flashlights, Bluetooth speakers, and portable power.

And these aren’t cheap knockoffs with different colors. One of its pinnacle products — the PAC1000 Power Station — directly competes with proven industry heavy-hitter Goal Zero. We tried this offering alongside its direct competitor, the Goal Zero Yeti 1000x, to see how it performs and what, if anything, sets it apart.

In short: Blackfire appears to have inherited the proven quality of Klein’s expertise in the tool industry. It offers basically all the features of name-brand power stations at a price that’s more attractive but not cheap.

If you’re looking for a variety of charging options in a semiportable (think car camping) package, Blackfire ought to be in the conversation. 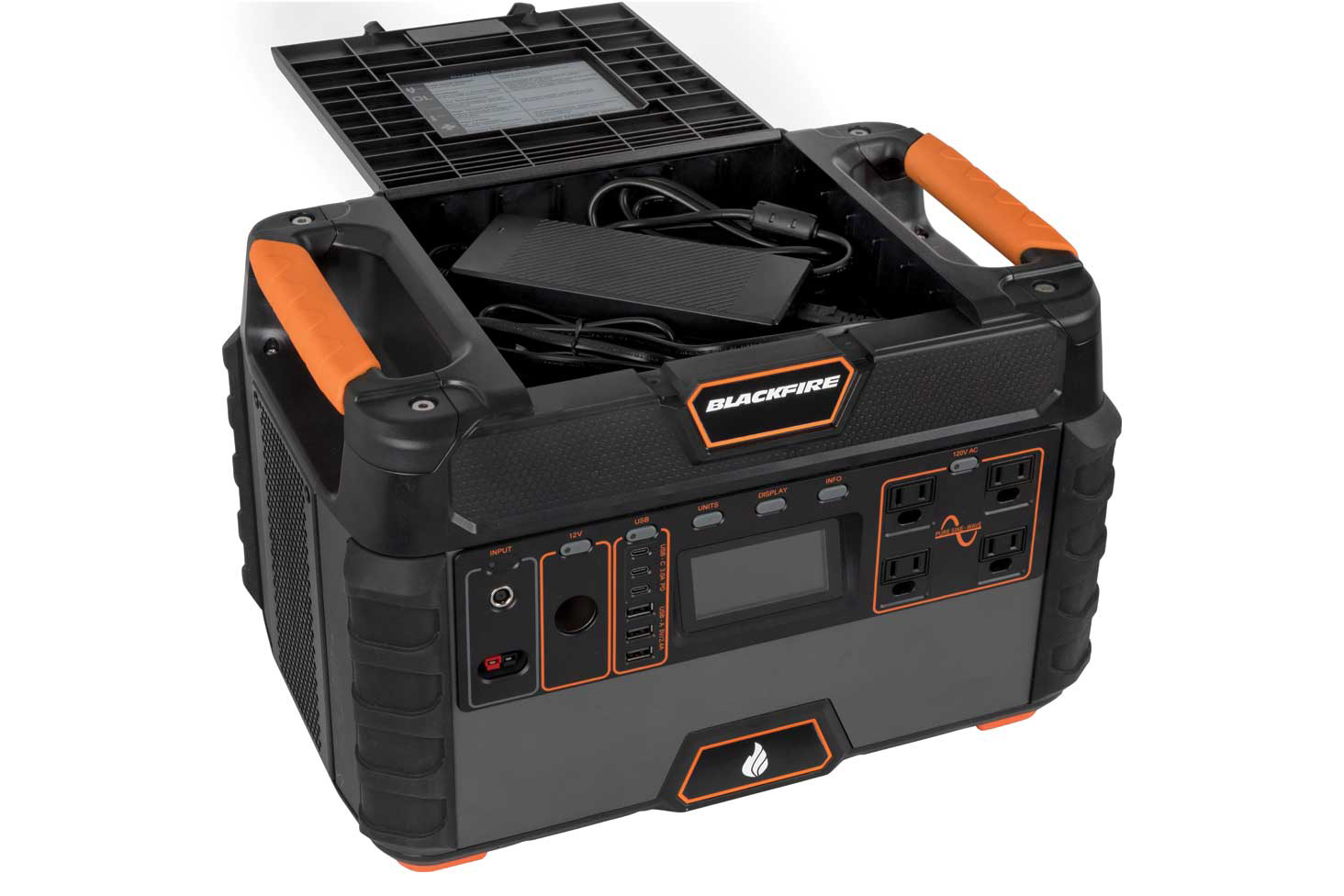 We used the Blackfire PAC1000 to charge laptops, phones, Bluetooth accessories, and more. We didn’t utilize the 12V car port.

In these instances, the power station performs exactly as expected. A power display shows the charge level and time to discharge. When charging, the PAC1000 shows the estimated time to full charge.

Close your eyes and unbox the Blackfire PAC1000 power station, and you’ll swear it’s a Yeti 1000x. Like Goal Zero’s proven power stations, and various other entrants to the market, the Blackfire carries the same dual-handled brick profile.

And while a look at the components bears a passing resemblance to the competition, closer inspection shows Blackfire tuned the inputs and functions to bear its own identity.

Finally, the display offers up a battery percentage meter, time until empty, and watt or amp output. When plugged into power, the display will show how much time to full charge. 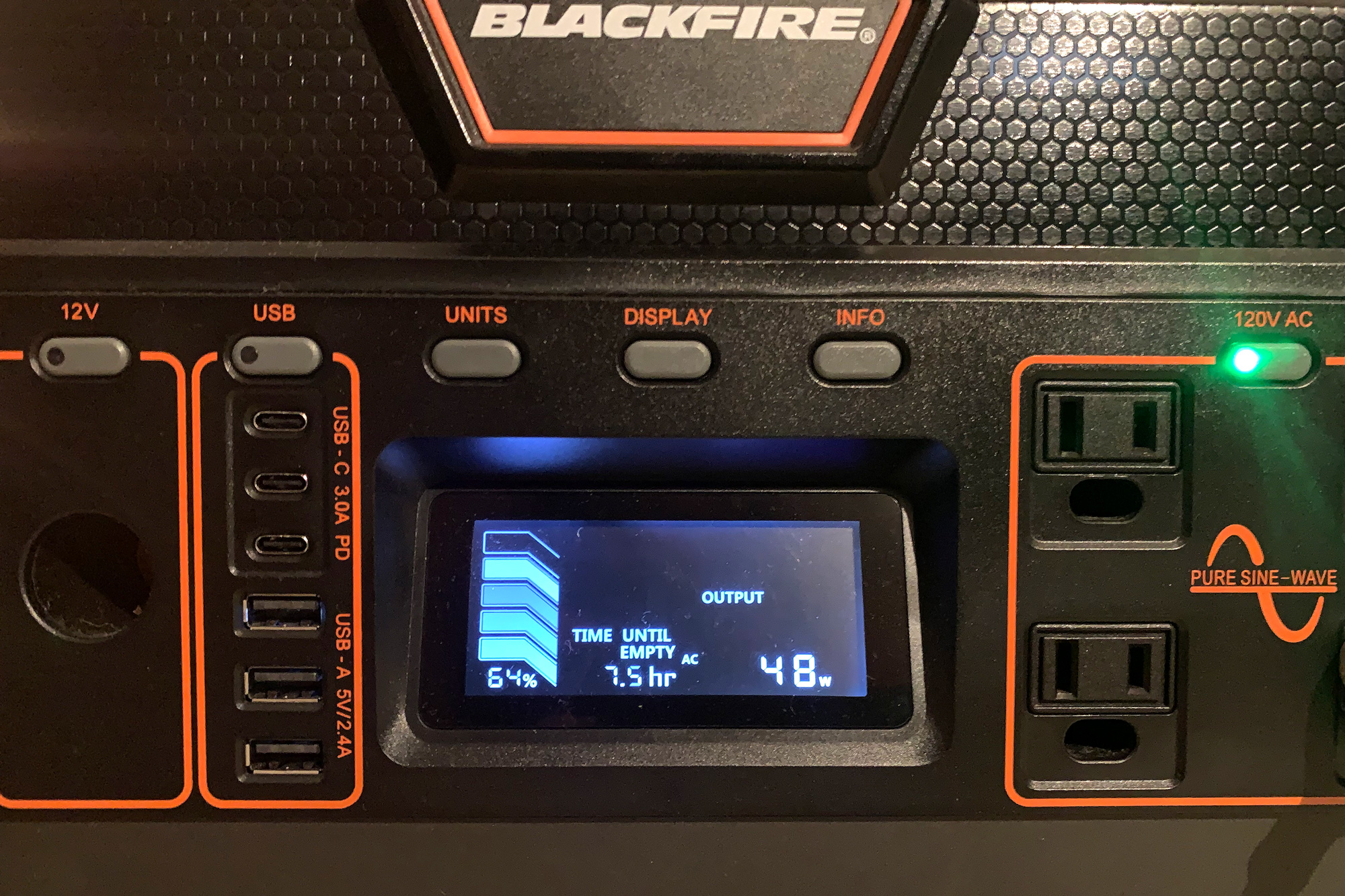 Power stations are rapidly overtaking the portable power market — long the domain of the gas-powered generator. To be sure, loud, petrol-guzzling generators will keep a spot in many folks’ off-grid power arsenal. After all, you can strap a jerry can onto your off-road rig, and that’s insurance against any power dead zones. An electric power station, however, only has the juice you gave it when you left.

But the advantages of a power station are plenty (and increasing). They’re comparatively clean, quiet, and useful for indoor (or in-tent) use. And Blackfire offers everything you’d expect from a modern power station — just not from a brand you’d expect.

Goal Zero earned a sterling reputation for outdoor, off-grid, portable power by innovating within the space early. And EcoFlow has won over Kickstarter for tech-savvy early-bird backers. But Blackfire competes with them respectably and appears to appeal more to the old-school crowd who may not be as hip to the burgeoning power station market.

This is evidenced in its black coloring and bright-orange hits, which lend a worksite aesthetic — though it’s nearly identical to the more tech-themed Goal Zero in use.

The PAC1000 will win over consumers shopping on price, not name. At $1,300, it comes in about $100 under its competition. And that includes fast-charging accessories (something other brands sell separately).

With the fast-charger, the PAC1000’s charge time drops from 9-12 hours down to just 3. And this comes standard.

So What’s the Drawback?

The Blackfire offers at least as many charging options, power output, faster charging, and lower price. So what’s the catch?

After a few months of testing, it seems not much. Blackfire’s PAC1000 weighs a bit more — about 44 pounds to Goal Zero’s 32 pounds. But the real questions are durability and reliability.

In the short term, the Blackfire is just as durable as Goal Zero’s — at least for daily abuse and transport. But how will it fare in the long term? We’ve tested numerous Goal Zero devices, and the brand’s reputation as a leader in the space is well-earned.

We haven’t had as much time to see how Blackfire fares with time and continued abuse. Over a single summer, through several hundred miles of travel, the odd drop, and some indelicate handling, it hasn’t yet flinched.

If you’re ready to embrace the future and dip your toe into gas-free power, the Blackfire PAC1000 is a stellar option. At $1,300, it’s still an investment. But for the feature set relative to the competition, you’ll be proud to have it in your service.

Its 1,500 W give it a near-perfect juice-to-size ratio — meaning it’s somewhat portable and still plenty powerful for most applications.

It has yet to prove itself among the premium offerings in the space. But if it stands the test of time, it could be a serious contender for off-grid power needs.