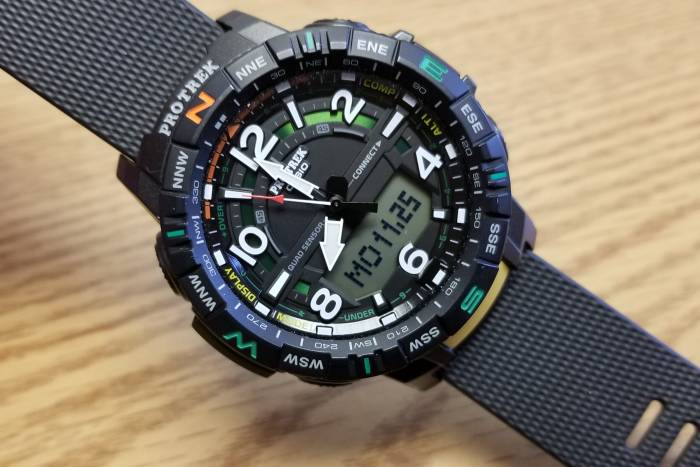 The Casio Pro Trek PRT-B50 packs a ton of utility — including an altimeter, barometer, and compass — into a very affordable watch.

Sometimes, a piece of gear catches you off guard. Such was the case with me when Casio offered to send a review loaner of its new Pro Trek watch, the PRT-B50.

My initial reaction to the marketing brochure was negative. The watch had too many buttons, too many markers, and fancy Bluetooth connectivity. It was enough to make me feel like a grumpy grandpa, waving my hand-winding pocket watch at the clouds.

But, 2 minutes after pulling the Pro Trek from its box, I realized the error of my ways.

Priced at $200 (around $180 on Amazon), the PRT-B50 crams an incredible amount of technology into a watch costing less than legendary mechanical pieces like the Seiko SKX. Am I comparing apples to oranges? Maybe.

But, after a few weeks with this Casio, I can tell you which piece of produce I’d take to the hills.

Let’s start with the basics. The PRT-B50 has a three-hand analog face, with a digital screen above the 6 o’clock position. The crystal comprises mineral glass, and the case itself measures some 50.8 mm in diameter. It has a lug-to-lug distance of 57.5 mm.

The resin case is particularly tall, rising some 15.8 mm above the wrist. This puts it solidly in the realm of giants, normally occupied by its G-SHOCK brethren.

But, this Pro Trek has something the G-SHOCKs lack — a lay-flat, quick-release resin band. Now, this may not sound like a big deal. But have you ever tried to set one of its Casio cousins on a desk or table? The proprietary lugs of the plastic bracelets form a permanent curve, meaning that they’re only able to rest on their sides.

And, because the lugs are integral to the band, you need to purchase an adapter if you want to swap them out with something else.

The PTR-B50 has no such problem. The band has two quick-release spring bars, which should allow for band swaps if you’re so inclined.

True, you may need to purchase a pair of standard spring bars, but this is a trivial expense compared to the adapters needed on a G-SHOCK. And, quite honestly, I felt no need to change the band. Smooth and supple, Casio’s resin at no time caused discomfort.

Back to the case. Its 64g resin structure comes with a steel back, boasting water resistance of 100 m. Considering the number of buttons on this thing (six!), that’s a pretty solid rating for an “above board” adventure watch. This is also why I’m not bothered about the bidirectional bezel.

Dive-style watches typically spin in only one direction, allowing you to keep track of the remaining oxygen in your scuba tank. The PRT-B50’s bezel is outfitted with directional markers, which is far more suited to its backcountry aesthetic.

While the chassis is solid, it’s the features packed inside that really sell the PRT-B50. This is what’s known as an ABC watch, meaning it carries an onboard altimeter, barometer, and compass.

All of these are available with between one and three button presses, making for easy operation of seemingly complex components. Each also offers the option to switch between multiple units of measurement, such as meters to feet and Celsius to Fahrenheit.

But that’s not the only trick Casio has up its sleeve. This particular Pro Trek also houses a step counter, thermometer, and Bluetooth connectivity. All of this can be interfaced with your smartphone by downloading the Pro Trek app, available for free through Google Play or the App Store. There’s even a dedicated button to sync the watch, making setup surprisingly easy.

I do have a few complaints with the PRT-B50. First is the watch’s height, which causes it to toss and turn when covered up by the long sleeves of my work jacket. (Your experience may vary, especially if you have larger wrists.)

Then, there’s the case. Look — it’s fine. The resin case and band showed no ill effects after 2 weeks of use, but I like a little more metal on my watches. This is a personal preference, not a knock on Casio. Though, a metal version for a few dollars more certainly would certainly be intriguing.

There’s also the odd decision to lume just the hour and minute hands. The LED lights — one for the face and one for the display — are very nice, catching the color of the hands interestingly. But some lume on the large, applied indices would be welcome.

Overall, I genuinely enjoyed my time with this Pro Trek. The bang for buck here is tremendous, especially if you’re in it for the bells and whistles.

And, while most of this review is wrapped up in the features, take a look at the face of this watch. It manages to be attractive and somehow uncluttered, even with all of its available readouts, markers, and functions.

Its looks drew compliments from multiple people. I especially like the green arc running beneath the numerals.

With its looks added to the $180 bargain, this is one of the best outdoor multitaskers I’ve seen. It’s an embodiment of the Casio ethos: affordable, durable, and technically excellent.