The world has changed for pro and amateur videographers alike, with the whirring blades of a drone signifying a new era where photos and film are not limited to a terrestrial view. 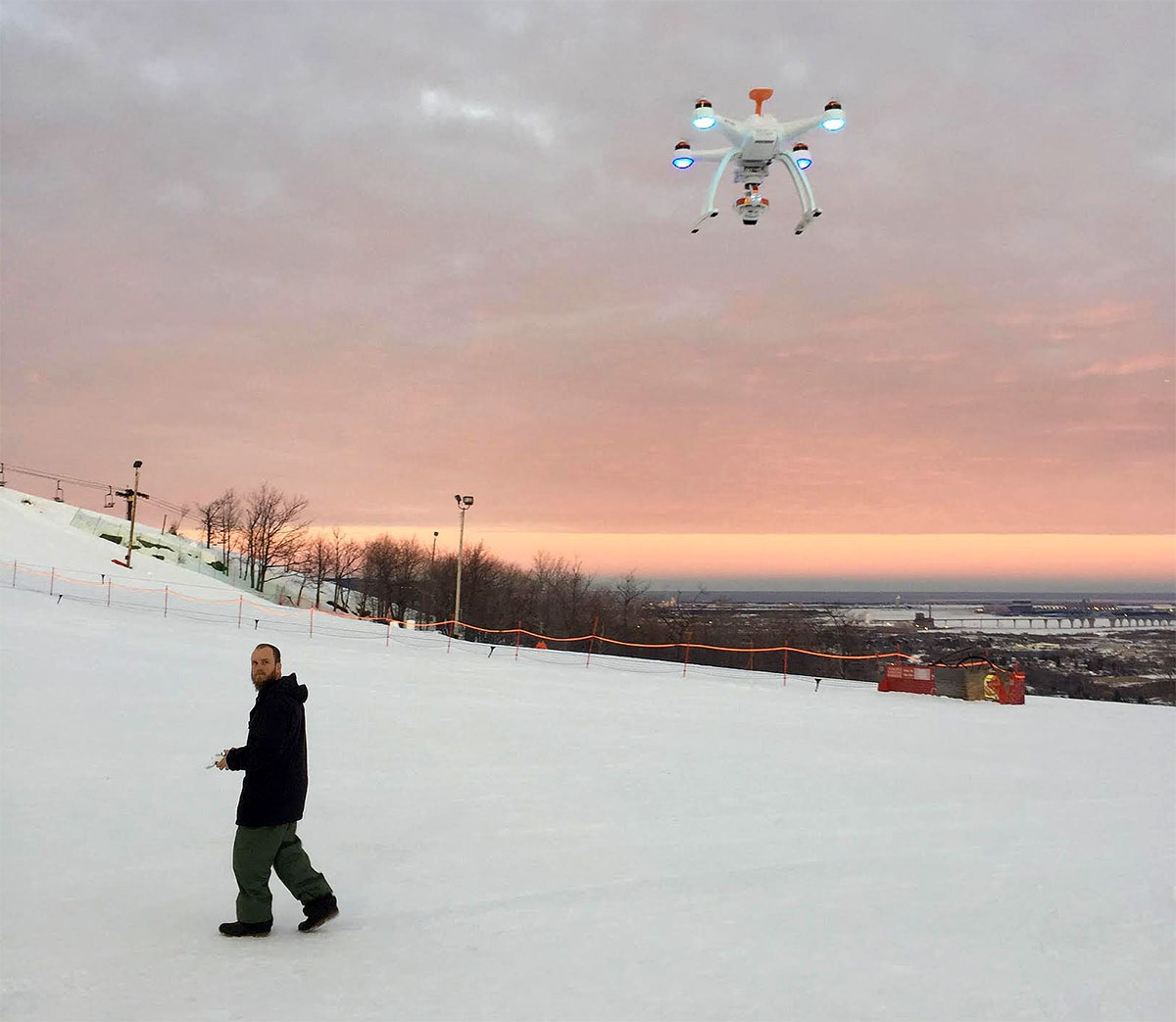 The sun is setting over Duluth, Minn., where the world’s largest lake fades from the cityscape to a horizon in the north. My camera, flying at 300 feet from a hill over town, captures the last rays of a January day from a vantage heretofore reserved for helicopters and planes.

For the past two months, I have put the Chroma Camera Drone through a litany of airborne paces for a full review.

It’s sailed in clouds, maneuvered through trees and chairlift towers, and boosted hundreds of feet into the air at the push of a joystick, all while capturing HD video and still photos along its elevated way. 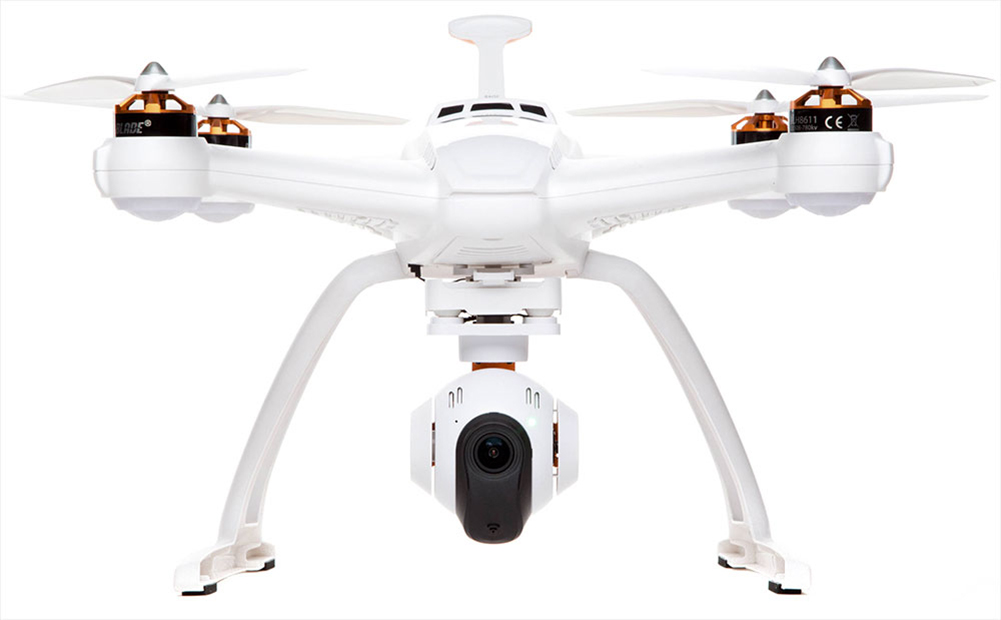 One day, I set the unit to a “follow mode” and had a friend take off on a snowmobile. The drone’s sensors and GPS processors hummed to life, the unit hovering, then its lights aglow tracking the man on the snow machine as he motored through an open field.

In short, the $899 unit has impressed. It’s easy to operate, safe, stable in the air, and it gathers stunning footage in 4K resolution as it flies.

For dedicated amateurs and burgeoning pros, the Chroma — full name: CHROMA with Stabilized CGO3 4K Camera — is a solid buy.

Made by Horizon Hobby, a longtime player in the radio-control space, the Chroma comes as a kit with everything you need to make aerial films. Its camera is mounted on a gimble that provides hard-to-believe steady shooting. 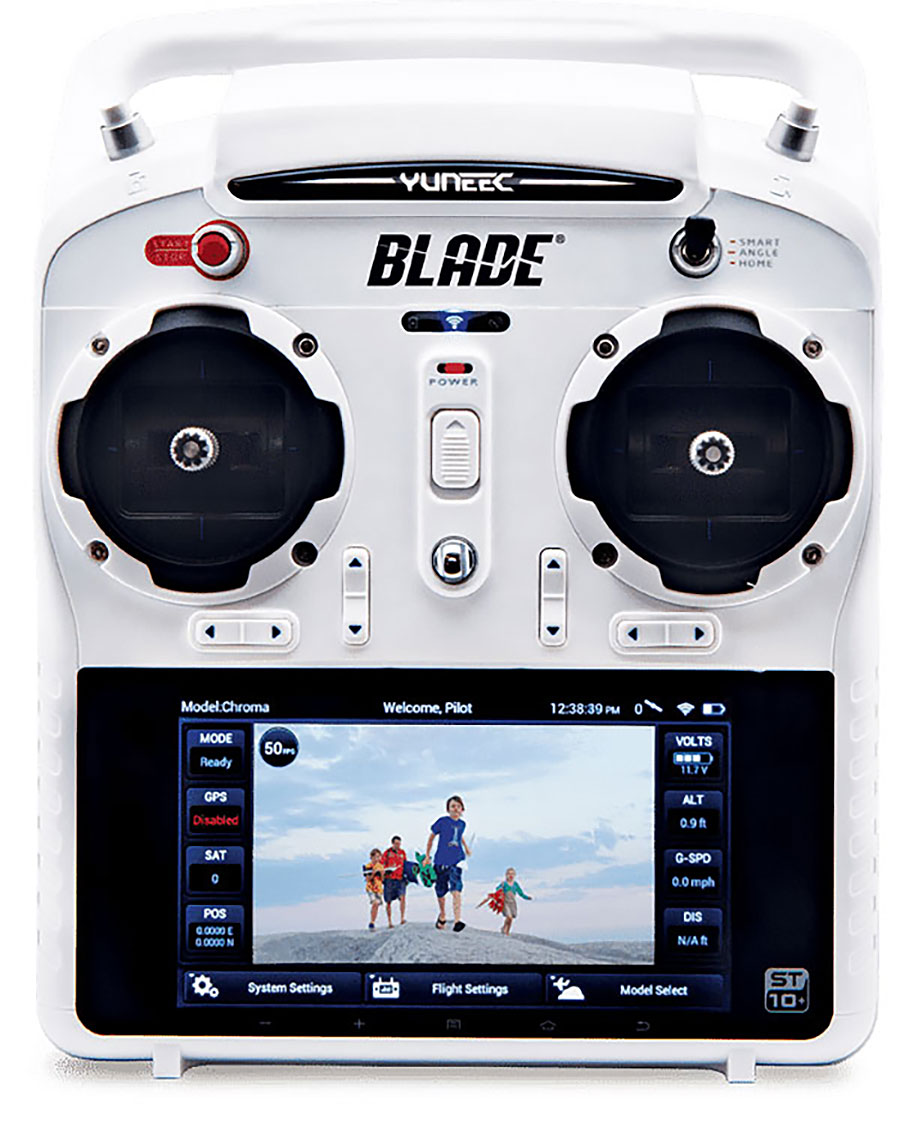 No smartphone is required. The Chroma comes with a touchscreen-equipped remote control that lets you see from the drone’s point-of-view, including up to hundreds of feet in the sky. Not only is this fun, but the realtime video feed allows a filmer to know what he or she is recording as the drone flies.

I have used cheaper “hobby” drones as well as $5,000 professional units. The Chroma, though less than a grand in price, leans more toward the pro end. It’s not as fast in the sky as some units I’ve seen on professional productions. But for capturing events, nature scenes, landscape shots, and even family gatherings and sports games (where drones are allowed) Horizon Hobby gives a great option.

A pair of joysticks on the remote give control. Buttons operate camera recording, lens tilt, and pan. Alerts and messages on the viewscreen, as well as lights on the drone feet, communicate the unit’s GPS connection, its fly mode, battery life, and other requisite information. 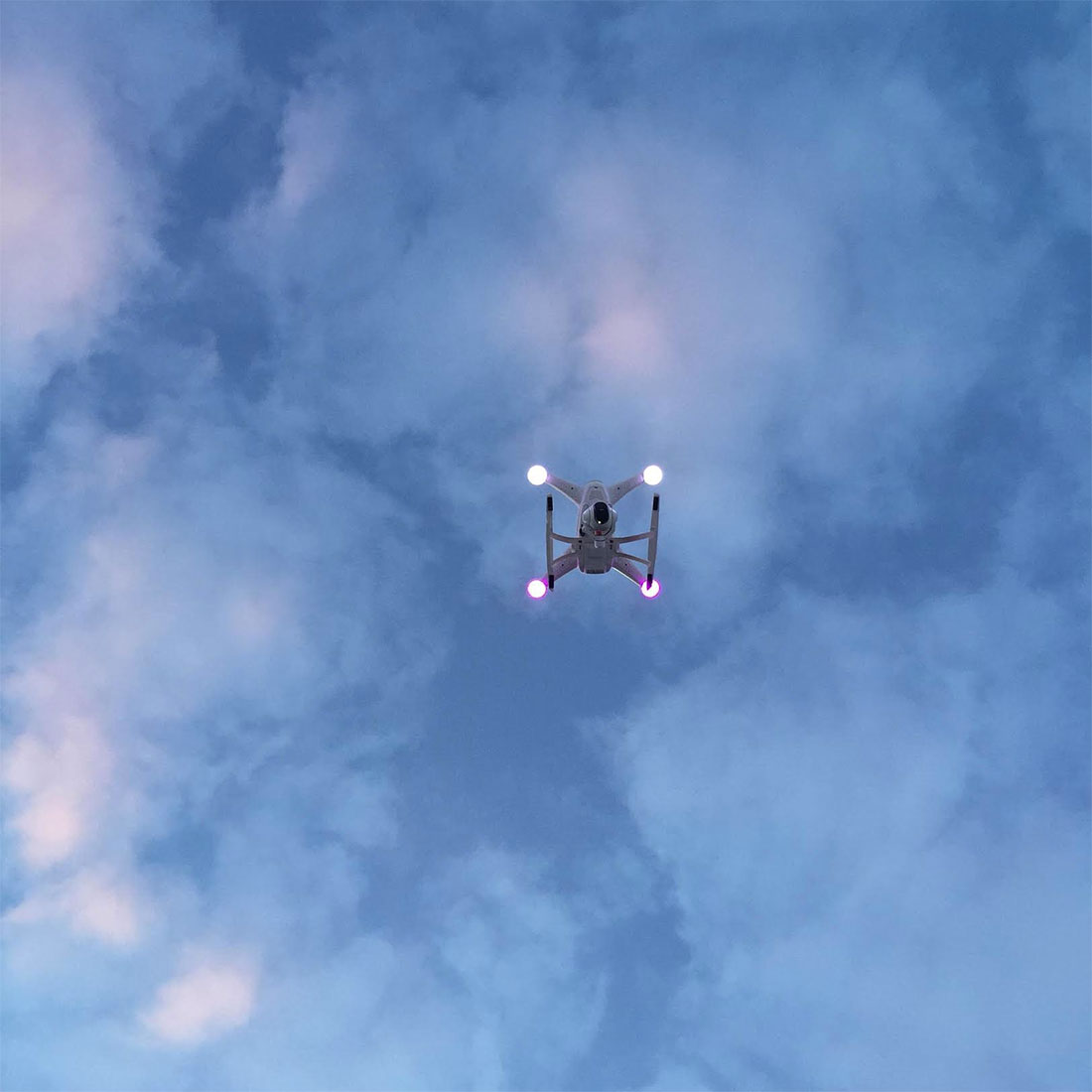 We tested the Chroma while skiing, on sub-zero days, over rivers, in wind, and generally in tough environments outdoors. It rarely hesitated. Once the drone is started up, its four tiny props whirring strong, the little flyer was solid in the air.

We crashed it once. A low-battery warning prompted an expedited landing where we hit the GPS “home” option. It auto-returns to its takeoff spot. However, in its landing path the feet clipped our idling minivan, causing the drone to tumble onto the snow.

The props were fine, but the camera came partially off. It was fixed in five minutes, however, by reattaching a rubber strut, and then it was off to get a battery recharge before we took flight again. 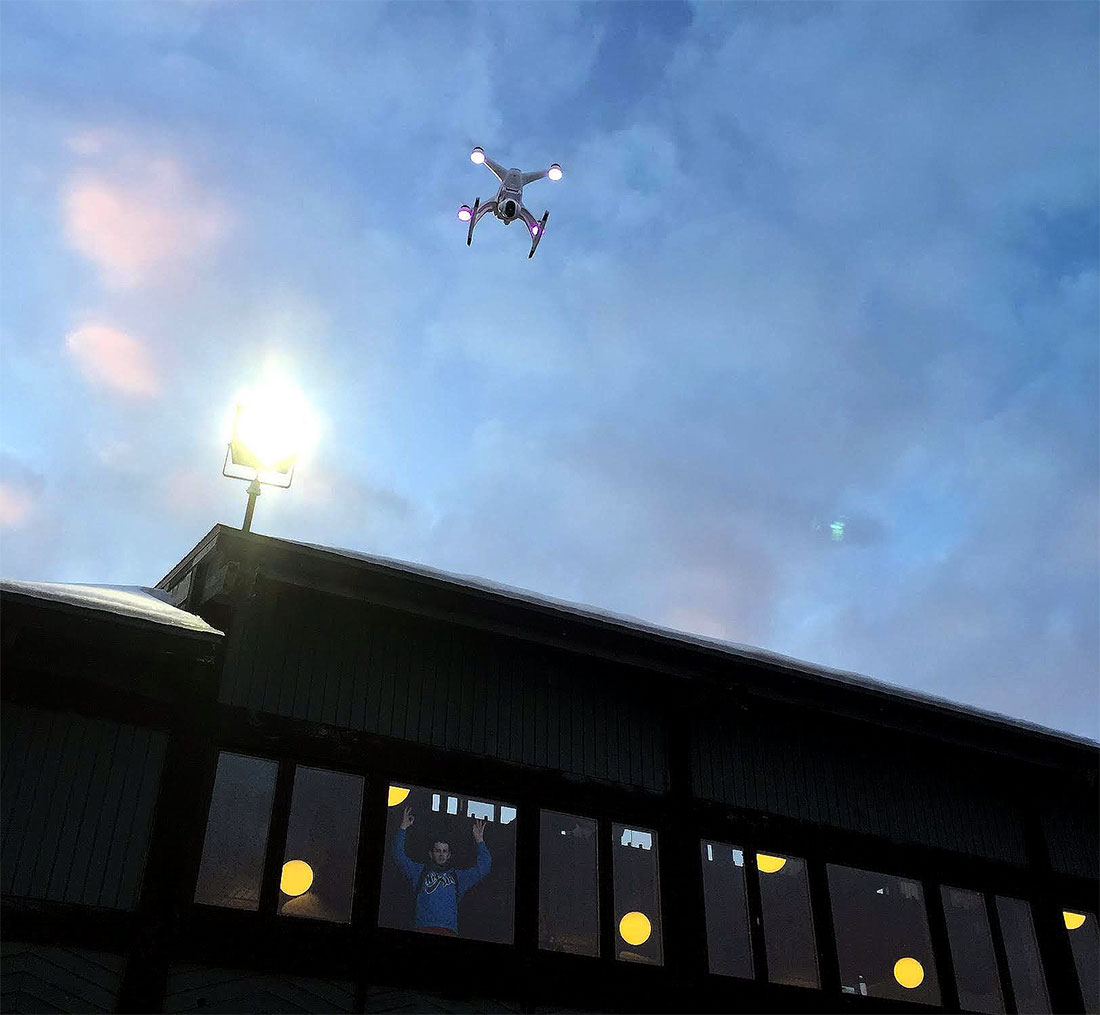 Beyond that user-error incident, the Chroma never crashed and it rarely even caused worry in the sky.

Multiple safety features are built-in or are options, including an always-on self-leveling function; the use of GPS and altitude sensors to hold position; and a “safe circle” barrier that prevents the aircraft from flying too close to people.

One great feature: The Chroma maintains a hovering altitude when the control sticks are released. Let go of the remote and the unit remains in a steady spot in the air.

It has a powerful battery that gives about 30 minutes of fly time. You plug it into a wall socket between sessions to recharge.

The camera is easy to operate. It takes video at up to 4K resolution or 12MP still images. It has adjustable resolution and frame rate and settings for varying lighting conditions. We mainly used it in its auto or default modes, and the image quality was impressive.

The brand touts a live video stream from as far as 1,900 feet away. Our connection was not always this good, the live video disrupted at around 500 feet away on a couple occasions.

Beyond our in-house test, we gave the Chroma to another GearJunkie reviewer who has some experience with drones. This is his feedback and notes from the two-week test.

I have been flying the Chroma without ever looking at the manual or receiving instructions on this particular drone. Flying is simple, and the possibility to crash this is very low from simply taking off and landing. Running into something is the only likely way to crash it.

There are two toggles for flight; one is the vertical movement and spin, and the other is horizontal movement of forward, back, left, right. It has a ‘safe’ mode, which keep controls always directional to the stick on the remote (no matter which way the drone is pointing) — if you make the stick go left, the drone will go left when you are looking at it, etc.

I actually found this confusing at times because I am used to the more traditional flight based on where the drone is pointing. But this is, I’m sure, less confusing out of the box, especially if you have not used a drone before. Safe mode also keeps the drone 10 feet away from the remote control at all times, so you are safe and anyone standing next to you is out of its flight area. 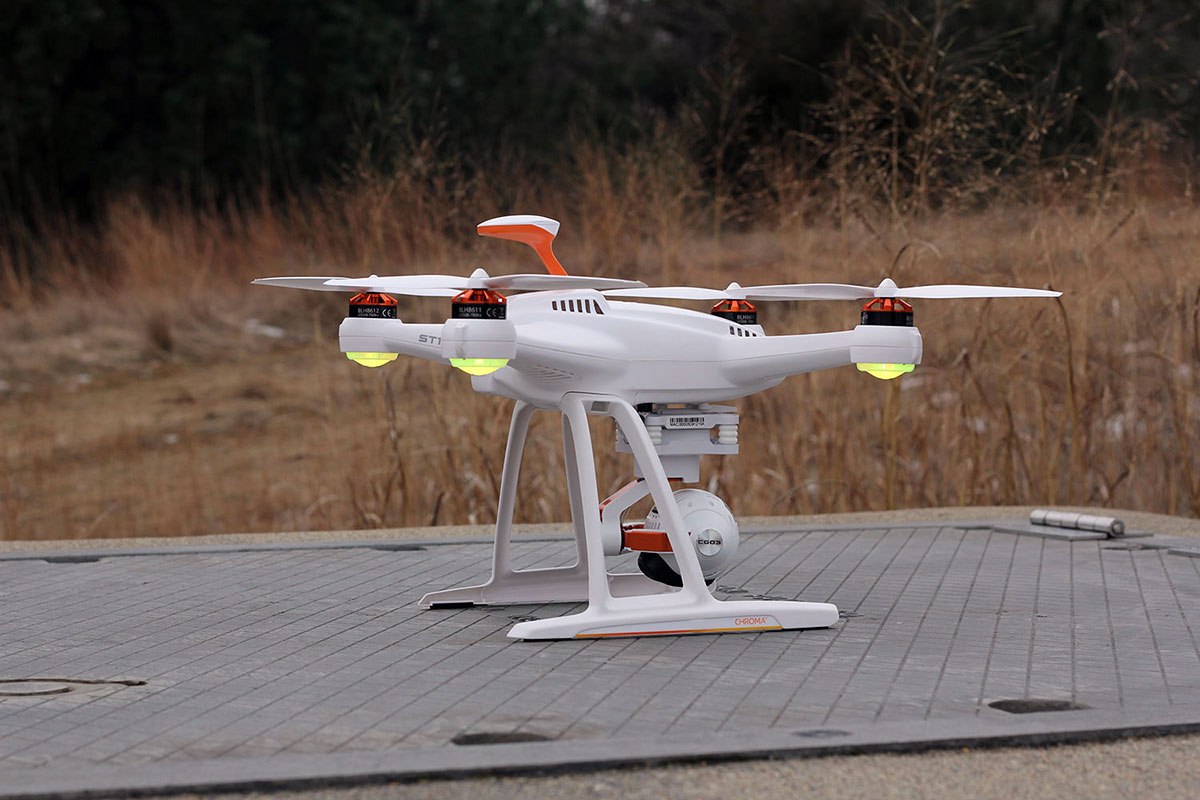 Another mode, the angle mode, allows you to fly the drone like a traditional remote-control vehicle. The controls are based on where the drone is pointed or where the front of it is. This control is nice for gliding the drone past whatever you are shooting and creating a panning shot.

Up Next: GoPro, Periscope Team Up For Live Broadcasting