“This board is irresponsibly overpowered,” I said, 5 minutes into my first test experience with the Evolve Hadean Carbon All Terrain electric skateboard.

And he pulled it off in spades. Launched in summer, the Hadean Carbon All Terrain promised effortless speed across pavement, grass, gravel, and whatever else skateboarders have dreamt of surfing across.

In short: While it’s built primarily for off-road recreational use, the Evolve Hadean Carbon All Terrain is fun and reliable enough to turn your daily commute into playtime (not to mention that it makes your commute faster).

Powered by two 3,000W motors on the back wheels, the Evolve Hadean Carbon All Terrain skateboard boasts a top speed of 26 mph (faster than a Onewheel and Class 1-2 e-bikes) and can power up the steepest hills you can find charge.

The motors are remarkably responsive; it’ll take riders from a stopped position to top speed in a matter of seconds on flat terrain. 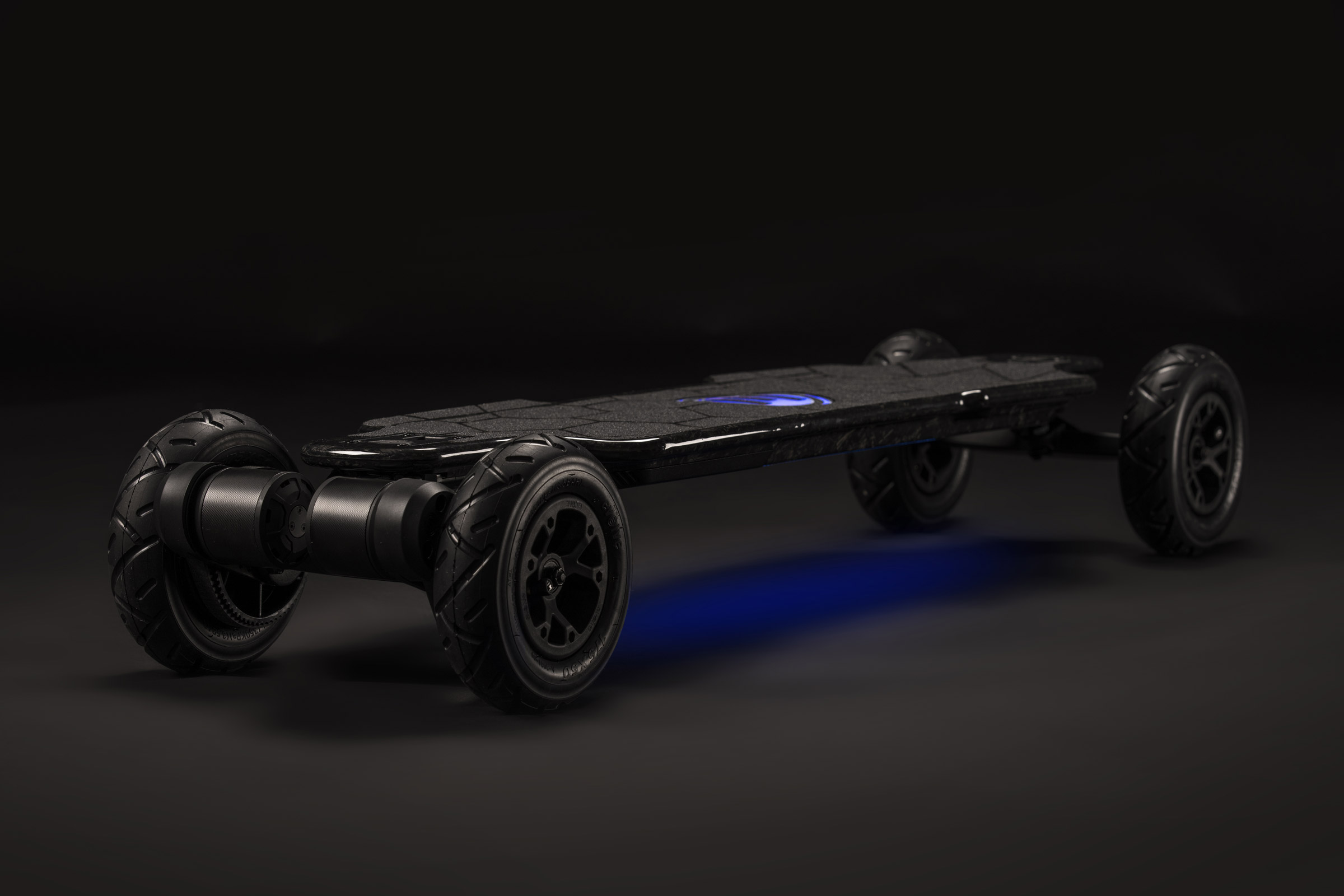 The custom-built 43.2V battery gets a full charge in 3-4 hours, and it will last for about 25 miles per full charge. It’s designed primarily for off-road use, as the burly 7-inch all-terrain tires indicate. But the extra oomph is useful for navigating low curbs and buckled sidewalks as well.

The forged carbon fiber deck cuts weight and is tough enough to handle the inevitable crash (more on that later). And in total, the entire package weighs about 30 pounds, with a capacity to hold riders up to 265 pounds in weight.

Riders control the board with a durable, premium-feeling remote, called the Phaze. It’s secured by a wrist strap and has an LCD screen, throttle and brake triggers, plus buttons to switch speed modes and customize the visibility lights on the board.

Oh yeah, the lights. The Hadean has colored LED lights that increase visibility and act as indicators. They fluctuate within a spectrum of colors, indicating braking, low battery, and more. In addition, they just look cool.

The lights, combined with the feel of the board and remote (not to mention the performance), give the overall package a premium feel. This is handy because, with a price tag of $2,899, it’s useful to know that money was put to good use.

Don’t worry beginners, there’s a safety setting that will max out the speed at about 6 mph. When you get comfortable with the board, you can adjust the settings to create four different speed modes.

All these stats are impressive, but really, the proof is in the ride. So I powered my demo board and hopped on.

Spoiler: I immediately fell off.

Here’s how. I was standing on the board when I switched out of safety mode and pulled the throttle trigger. The board flew out from underneath me, plopped me on my back, flew 20 feet down the driveway, and knocked over my neighbor’s garbage can.

To help prevent this, Evolve has a thumb brake on the hand device. But it’s worth noting that when you fall, your instinct will probably be to clench your hands. Doing so will rocket the board to destinations unknown.

Any doubts I had about the board’s power disappeared at that moment.

I ran down the street and hopped on the board with a renewed sense of respect for the Hadean’s 6,000 W of get-up-and-go.

The Need for Speed

Initially, I was tentative on the board, intimidated by its excessive power. Combining the momentum from the motors and the carving lean was initially touchy.

But after a few sessions, I leaned into the idea of carving like I would on a snowboard, and everything clicked. I’ve been snowboarding for 20 years, and as soon as I treated the Hadean like a snowboard, the riding was smooth as butter.

Before long, I was hitting dirt trails around my city. It was as close to the feeling of snowboarding on flat ground as I’ve ever felt.

I started taking it for 10-minute rides around my block, reveling in the feel of leaning into turns and running back exhilarated from the power and speed.

By the end of my test period, I was logging daily rides to the coffee shop, the gym — anywhere I could think of. Instead of grousing about having to drive somewhere, I was looking for an excuse to hop on and ride.

And, as the name suggests, it’s a beast off road as well. It powers up hills with ease, and the all-terrain tires kept their grip on dirt trails, gravel, and grass. There’s a bit more play off road: The Hadean handled controlled slides on tight turns like a boss.

Skating on the Hadean helped me fulfill my dream of snowboarding everywhere I needed to go. Carving feels just like it does on the mountain, and the speed is nothing short of exhilarating.

All that power isn’t cheap. The Hadean Carbon All Terrain will set you back $2,899. But if you’ve got the cheddar, this ride could change your commute forever.

The Best Flashlights of 2022

We tested the best flashlights for 2022 with options for every budget. Top picks include Fenix, Olight, and more! Read more…

The Best Treadmills of 2022

We tested the best treadmills of 2022 with options for every budget. Top picks include Nordic Track, Peloton, and more. Read more…

Up Next: COROS Rolls Out CORE Body Temperature Integration in Its GPS Watches