Home » Technology » A Generark Battery and Solar Panel Powered Work for a Week; Here’s How

I tested the Generark HomePower ONE power station coupled with SolarPower ONE solar panels as a solution for off-grid offices for review. This system proved extremely effective, at least during a sunny week in Colorado this fall.

Working remotely from a campsite in the autumn mountains is an idyllic proposition. And for the first time this year, I made it happen thanks to modern battery power stations, high-speed hotspots, and good cellphone coverage.

For a week this fall, one buddy and myself set up an elk camp high in the Rocky Mountains. We spent the days at a pop-up camper connected to screens and the internet, and the mornings and evenings prowling the forests looking for rutting elk.

And what we learned was that battery technology, wireless connections, and data upload speeds have finally converged to make truly remote working possible.

The second was the Generark HomePower ONE, which we also charged with solar panels during the week. Here’s how it stacked up.

In short: Plenty of power, portability, and solid durability combined with SolarPower ONE solar panels make a solid system for off-grid power needs.

The Generark HomePower ONE is a 1,002Wh portable battery power station. It has three 110-volt, 1,000-watt AC outlets, as well as a built-in inverter.

It also has several DC outputs, including 2 USB-C outputs with PD 18W, 1 USB-A with 5V/2.4A, 1 USB-A with Qualcomm Quick Charge 3.0, and 1 car outlet with 12V/10A. You can recharge from your car, an AC outlet, or the SolarPower ONE portable solar panel.

And with a lot of sun in the forecast, we chose to run the battery off solar panels for a week. 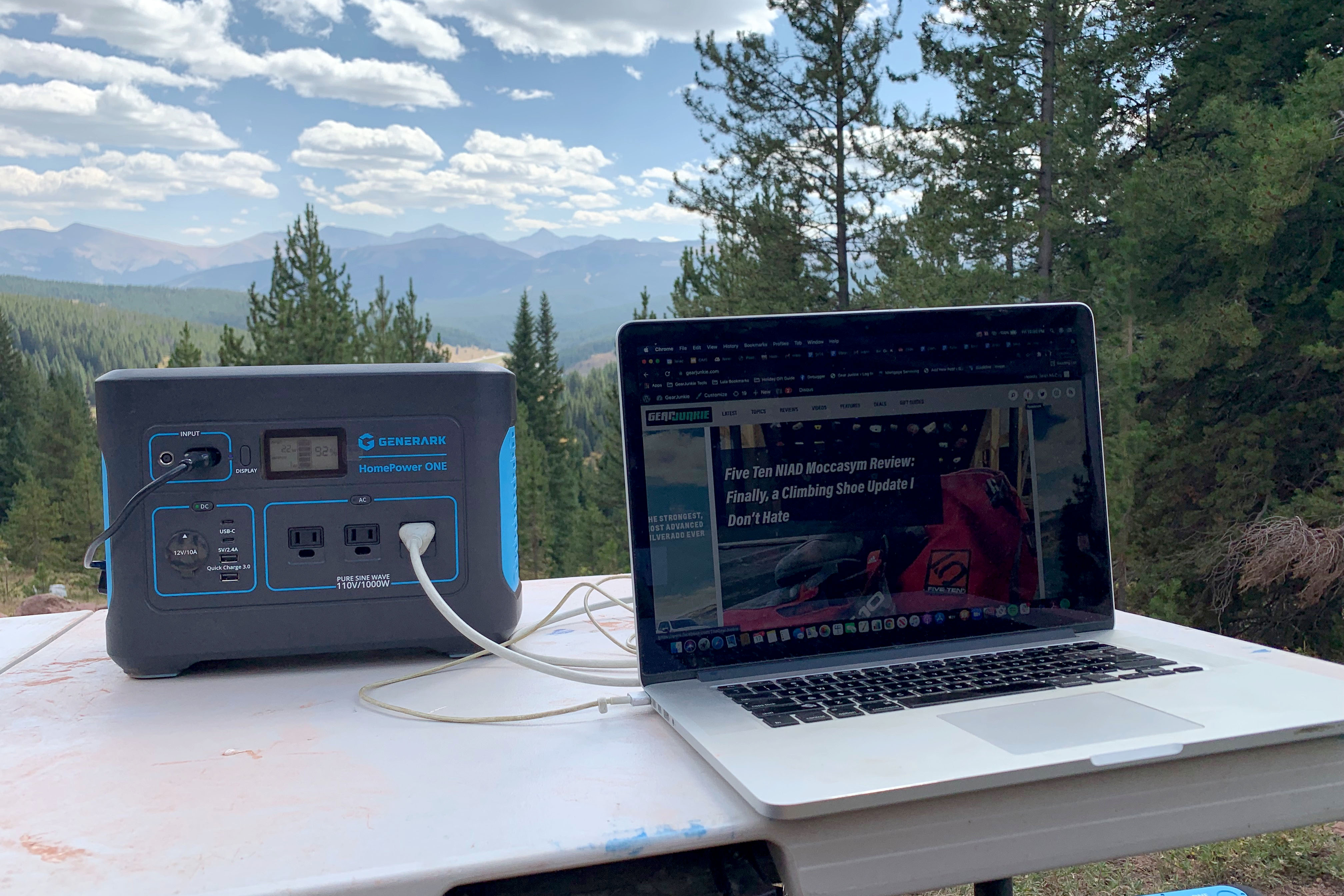 The results were eye-opening. With two people working off computers and hot spots for the week, we kept the HomePower ONE plugged into two SolarPower ONE solar panels during the day. With full sun, the combined 200 watts of potential input consistently generated about 120-130 watts.

In reality, this is how it washed out. We’d begin the day with a battery around ½ charge. Because we started working well before the sun was high, we’d be down below ¼ power before putting out the solar panels. But once the panels were in the sun and generating juice, they quickly refreshed the battery even with the computers plugged in.

Running one MacBook Pro plugged in for a full day of work, I would finish the day with the battery 100% charged and my computer also charged up.

I must admit, my buddy and I were both pretty impressed. 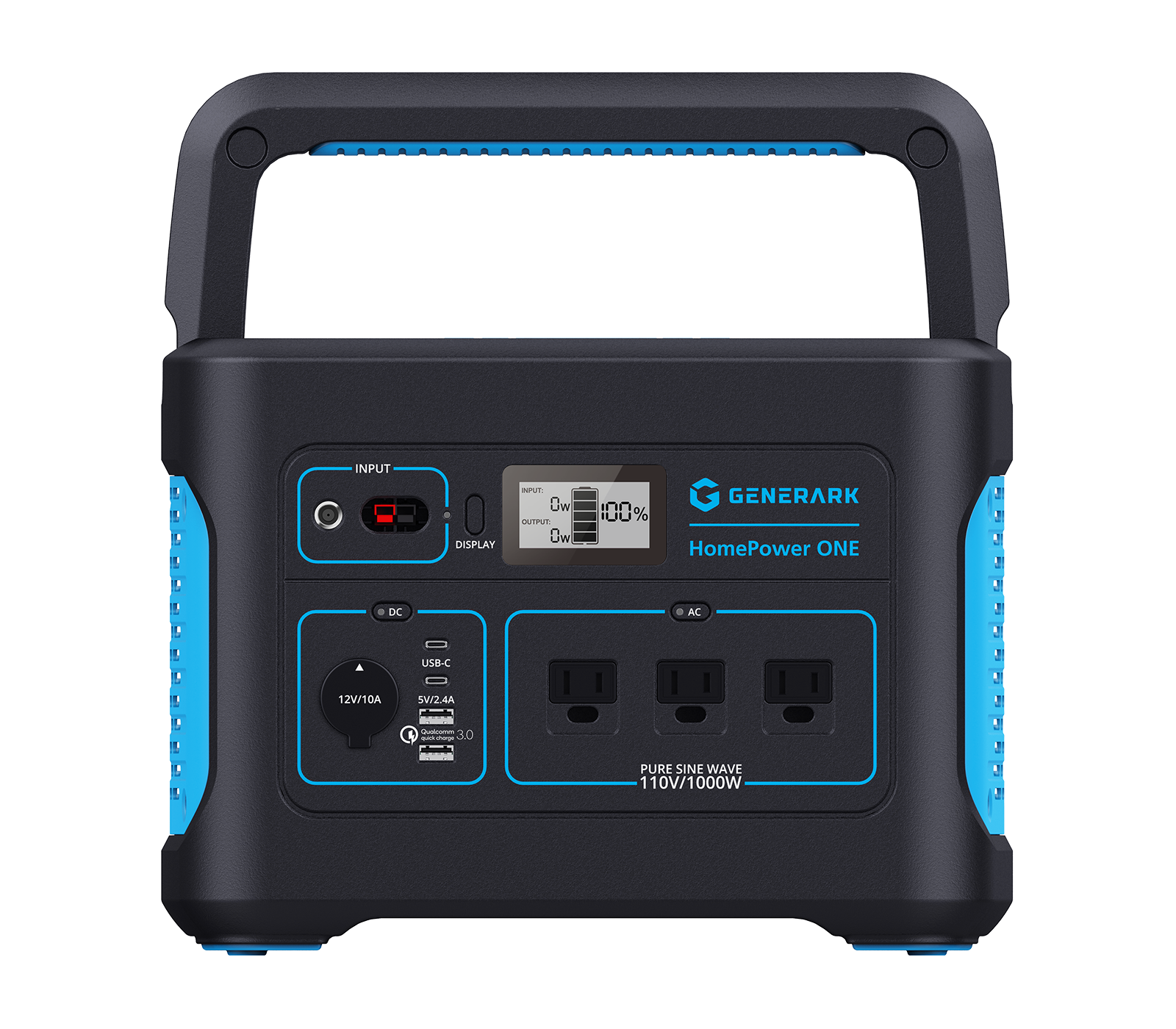 Designed largely for indoor use, the HomePower ONE is not waterproof. This means you need to keep it sheltered in some fashion, whether that be storing it in a vehicle, tent, or RV. It’s small enough that it’s fairly easy to keep out of the elements, but this is a worthwhile consideration.

But beyond its susceptibility to water, this power station seems quite durable. I would not hesitate to toss it in the bed of my truck to take on camping trips.

Generark HomePower ONE: How It Stacks Up

The portable power station is rapidly taking market share from the petrol generators of old. While there is still a large market for gas-powered generators, many consumers have learned to love the silence of powerful portable batteries.

And while old-school generators still edge out battery packs for long days of heavy use as you may see at a large construction site, battery packs are becoming a very viable alternative for recreation. 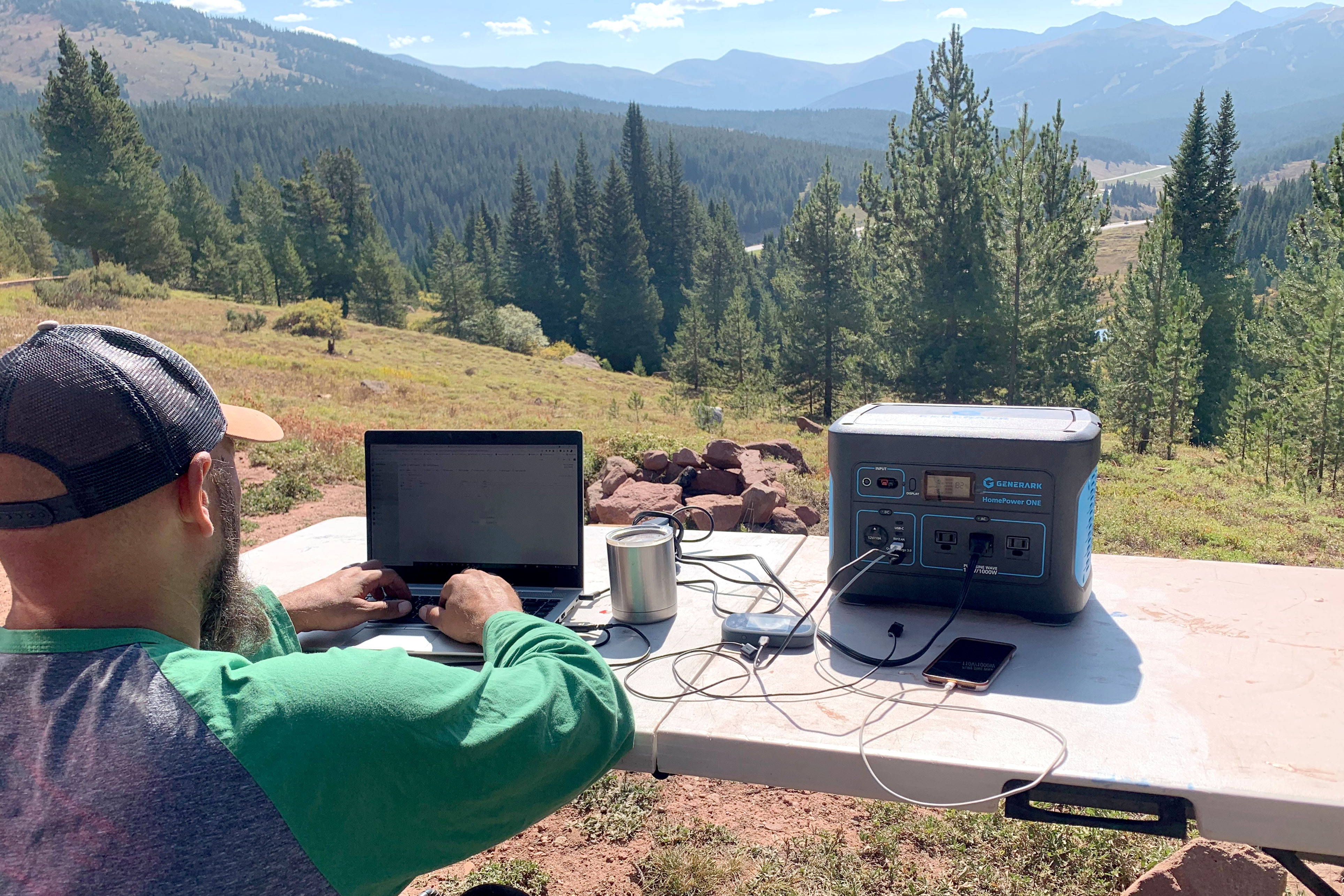 The Generark HomePower ONE is a strong contender in this field. It compares favorably with other brands. Goal Zero’s Yeti 1000X power station, for example, packs 983Wh into a similar form with similar outputs. It retails for $1,400, while the HomePower ONE sells regularly for $1,300.

Functionally, both brands work well. The Goal Zero packs on a few different kinds of outputs. But really, both should serve consumers well.

We put this system to a fairly rigorous test while elk hunting and were consistently impressed. However, the real kicker was the solar panel setup.

Whoever designed the SolarPower ONE portable solar panels should be commended. They have a robust plastic frame and fold easily into a compact carrying shape compete with a handle. The cables roll easily into a built-in carrying bag and then unspool to easily connect to the battery and to one another.

The design is foolproof and a joy to use and set up. You’ll spend $600 for two panels. And while that’s a significant investment, the ability to recharge this pack remotely with the sun is wonderful.

While we haven’t had a direct head-to-head challenge of Generark’s system yet against the competition, we loved it.

For those looking for a powerful power station and solar charging option for home or remote use, the HomePower ONE coupled with the SolarPower ONE solar panel is a worthy contender.

Up Next: REI Cyber Sale: Save Up to 50% on Outdoor Gear All Week

Saving…
REI Cyber Sale: Save Up to 50% on Outdoor Gear All Week
Power Savings: The EcoFlow Christmas Sale Has Big Discounts on Power Stations
×