Simple and lightweight, for $99 this solar panel will be all you need to charge small electronics in the woods. It’s the latest incarnation from Goal Zero, a company who has long been a leader in the portable solar space. 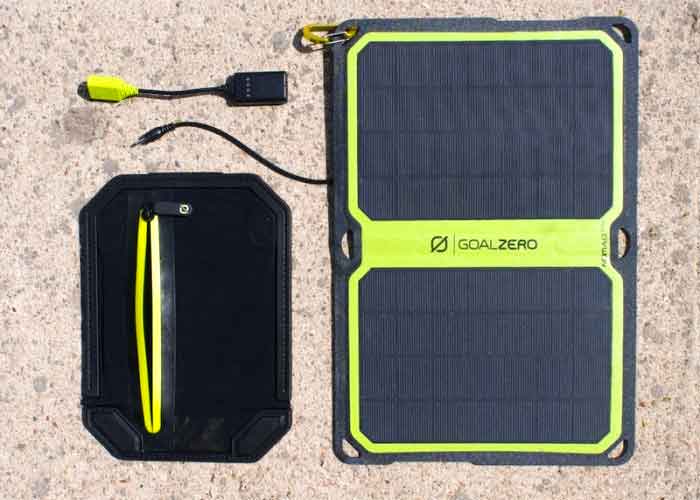 The Goal Zero Nomad 7 is a compact solar panel that charges phones or other electronic devices, and it has a modified maximum power point tracker to regulate output. We put this pre-release model to a quick test for a review. (It is available for sale on Mar. 29, 2016.)

The Goal Zero Nomad 7 Plus is, on the outside, one of the simplest solar panels we’ve tested. It is light, weighing less than 13 ounces, and it folds down to the size of a small book.

But don’t judge this book by the cover. Thanks to a small modulator, the panel tracks charging and output, helping devices recharge quickly even with the common fluctuations in power generation due to things like shadows and clouds.

The panel packs 7 watts of charging output at 1.4 amps. It is “smart” power, and it quickly juices small devices in our testing.

The Nomad 7 Plus ($99) has no battery or other power storage. If you want to store extra power purchase any of a number of batteries separately.

It has a single charging output — a USB port with an intuitive power meter built-in. The meter helps you angle the panel just right to capture every possible bit of sunlight. Illuminated dots indicate charge output strength. 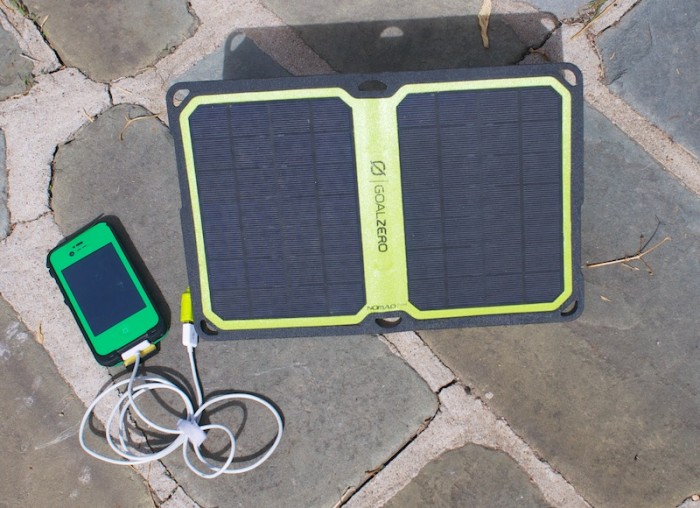 We tested a common use for this panel — charging a cell phone.

On a moderately sunny day, the charger brought my drained iPhone 4S (yeah, I know it’s old) to a full charge in about two hours. It’s worth noting that, because of some high clouds, the charger wasn’t showing a full four bars of charging, but it was still very effective.

Goal Zero says this panel is NOT to be used to charge tablets, and as such we did not test an iPad.

I also tested it using a small Coast flashlight and a Suunto GPS watch. For both devices the panel brought them from stone-cold-dead to functional in about 15 minutes. The flashlight kicked out a powerful beam after a half hour of charging in the sun. 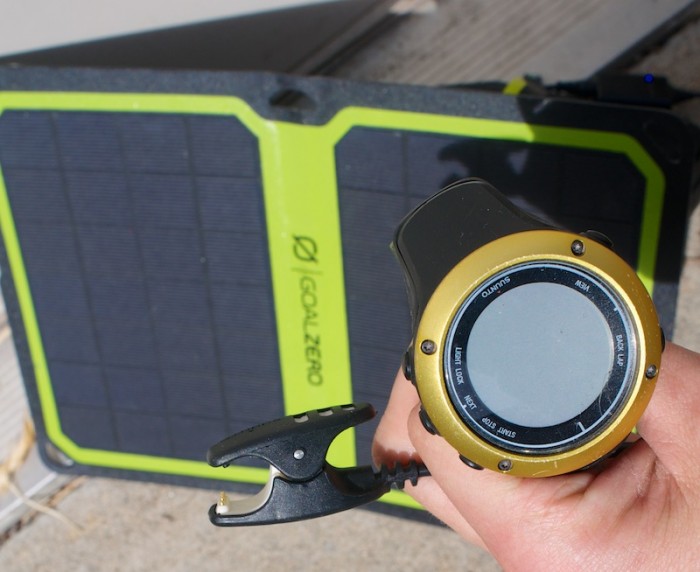 A dead battery in a GPS watch was restored to 30 percent in an hour.

I left the Suunto GPS watch on the charger for about an hour on a sunny day in Denver. It went from completely dead to 30 percent charged in that time, which is about as fast as it charges from a wall socket.

The biggest difference between this panel and others is hidden in a small modulator called the Maximum Power Point Tracking controller.

The controller helps optimize the output from the solar panels for the battery being charged, particularly given variances due to light and shadow encountered during charging. 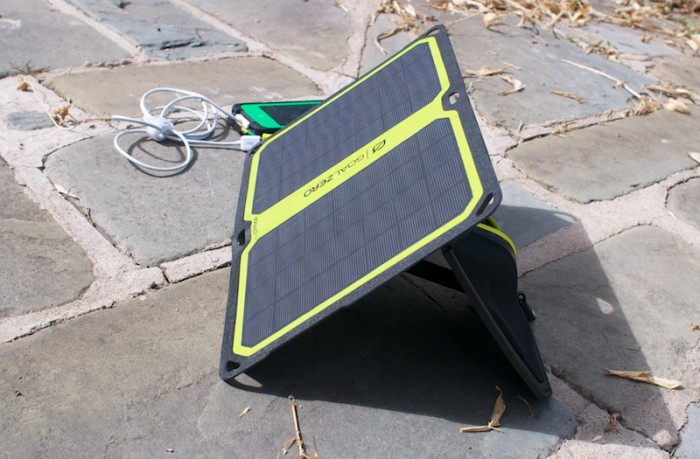 To boil down the tech jargon, it tracks the history of the power flow, so it understands if a device disconnects due to being fully charged or due to a lack of power (because of shade). It then automatically reconnects if needed.

It also “sags” the amount of power created due to spikes in solar energy, which helps devices charge safely and effectively, Goal Zero touts.

Four LED lights on the modulator take the guesswork out of positioning the panel, so you know when you are getting the maximum charge. 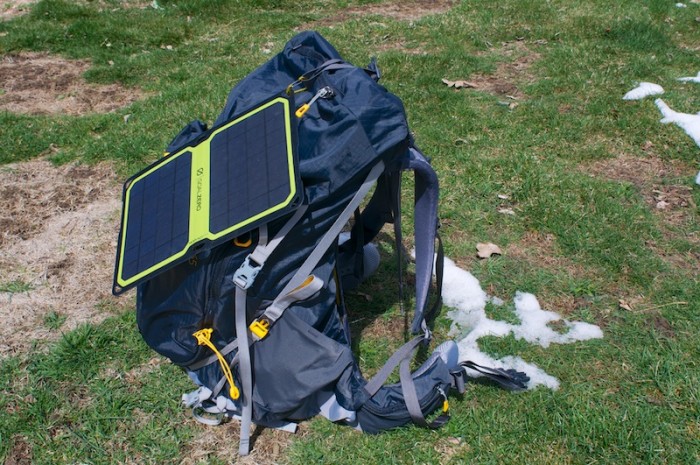 The Nomad 7 Plus comes with a magnetically-removable kickstand. It’s useful in angling the panel at the sun. But if you don’t want to carry the extra weight (the kickstand adds 3.9 ounces), just pull it off and leave it at home. With the kickstand removed, the panel weighs 9.3 ounces.

This panel will be included in the purchase of the Gregory Baltoro, a pack designed with charging in mind that GearJunkie awarded ‘Best In Show’ last year at an industry event. That pack comes to market at REI stores in May. 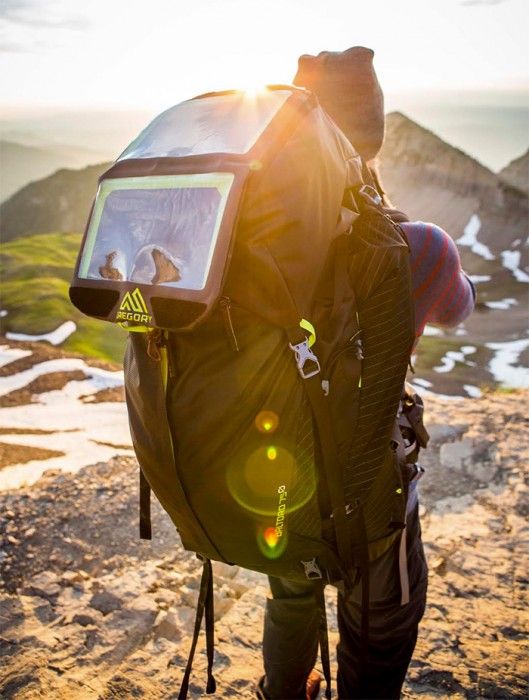 To use it on other backpacks, the panel attaches on the outside with an included carabiner. With the kickstand removed, it becomes a cardboard-thin package that’s easy to attach and carry. The foot-long cord is plenty to reach interior pockets where electronics can ride, getting charged while you hike.

This is a slick little solar panel. It is effective at quickly charging small devices and is simple to use thanks to intuitive metering and design.

For those who just want to recharge phones and other small electronics, or store energy in small batteries for later, this is a good choice.

Up Next: Personal Audio: ‘Boombot’ MINI Review On A Bike