Home » Technology » Back To The Future: Onewheel Rides Like Hoverboard

Hoverboards aren’t as widespread in 2015 as Back to the Future predicted, though we’ve made progress, and Onewheel is leading the way. 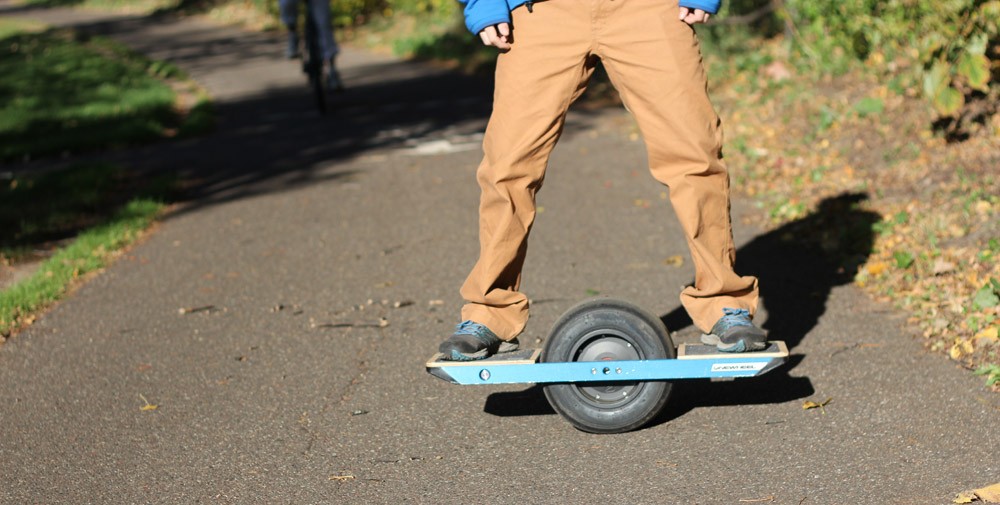 Onewheel is a self-balancing electric board that cruises at 15mph. The next-generation board gives a coveted floaty, “powder riding” feeling on pavement and singletrack, all at the futuristic pricing of $1,500. We got one shipped to GearJunkie for a review, riding the Onewheel for a month on pavement and dirt.

When I first saw Onewheel, I had an immediate urge to ride it. When it comes to boardsports this is as new and innovative as it gets. Today (Oct 21, 2015) is “Back To The Future Day,” the day in which Marty McFly arrives in the future, and in my opinion, the Onewheel is the closest we’ve got to an actual, ride-anywhere hoverboard.

Sure, a few brands have made boards that actually hover, but they are confined to use in a specially-constructed, metal park. This thing goes anywhere.

I was giddy as I took my first ride. To mount this futuristic beast, I placed my feet on both pads and pushed down to level it out. Once horizontal, it balances on its own, a trippy feeling at first. 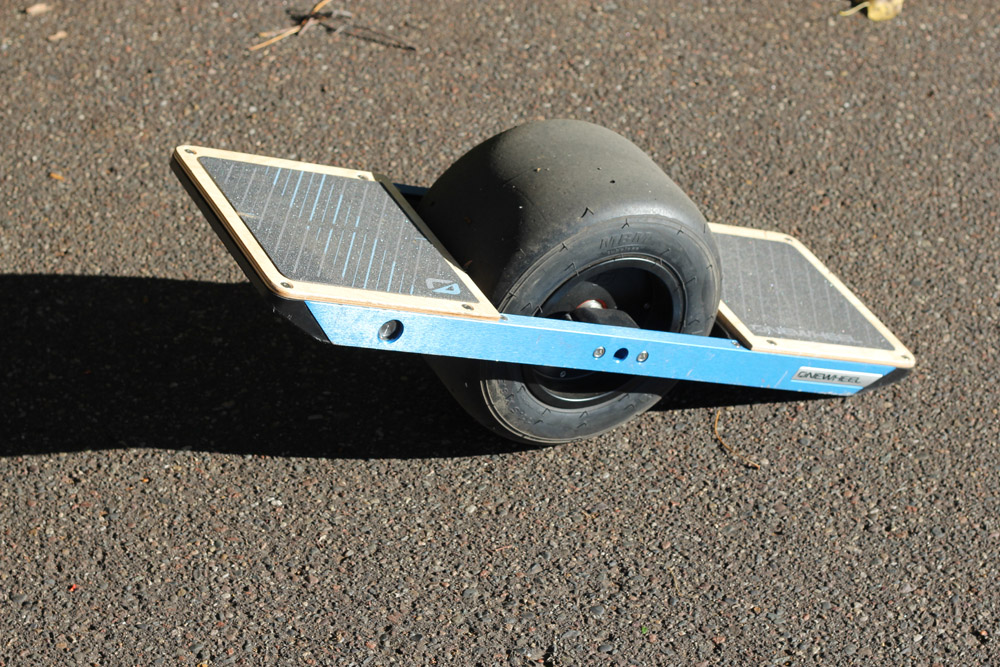 You lean forward to start riding and lean back to slow down or stop. You lean to carve and turn.

The whole motion is comparable to a Segway, but the execution is infinitely more awesome. It took a few minutes to get used to the mechanics, but after that, carving, hills, and singletrack were no problem. 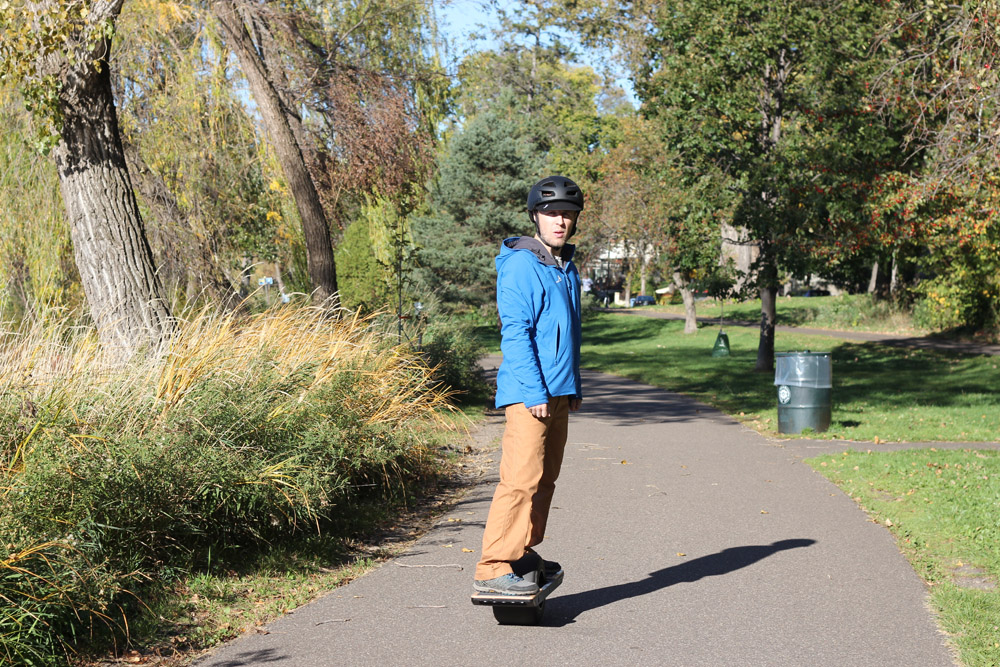 Where to Test: On paved trails, city streets, gravel roads, grass, or smooth singletrack. Note that rocky, rooted, or steep singletrack is unrideable.

Who’s it for: Commuters who want to ditch a car or bike in favor of a board. Or for anyone who loves boardsports and has some extra money to spend.

Onewheel Compared To Other Boards

Riding on a single 11.5 inch wheel is pretty awesome and gives a feeling similar to snowboarding powder. The scaled down Formula 1 racing tire works on all types of surfaces and can take a beating. I accidentally ran over some glass with it and it was unfazed.

The foot pads were also new to me. The fact that they sensed I was on the board and reacted to my movements blew my mind. The engineering is nothing short of real life dark magic and it’d make Doc Brown from “Back To The Future” very proud. 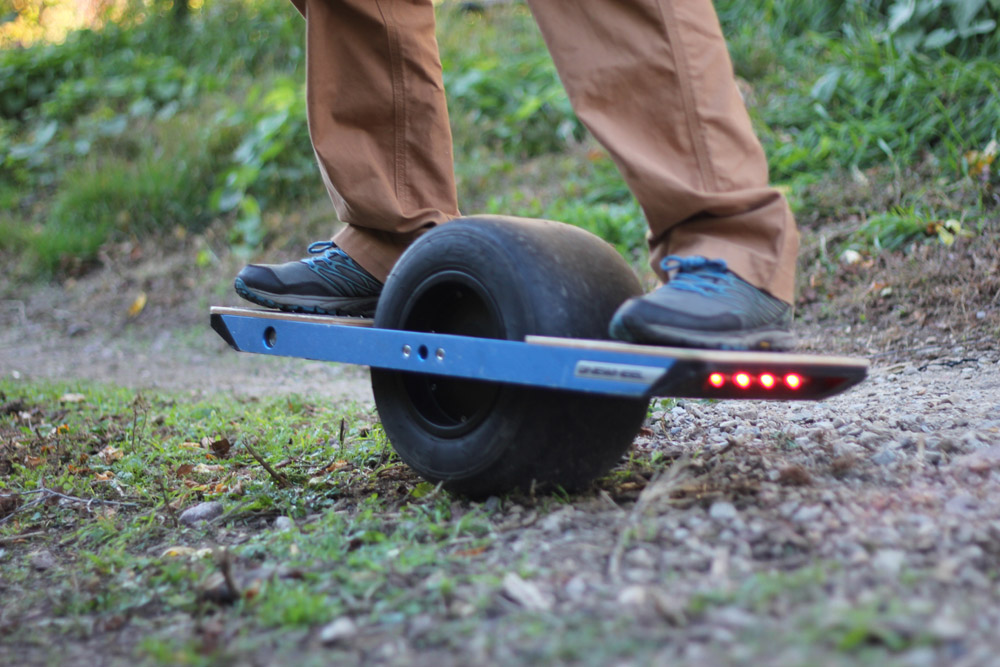 Carving was easy and smooth, especially at lower speeds. I was able to fully turn around in a 5-foot area, which is much tighter than a longboard.

Compared to snowboarding and longboarding, I did notice a difference in my body position riding it. I tended to lean more and relied on my weight to accelerate and turn more than on other board types.

Because I could, I rode it everywhere. From the bike path outside our office, to gravel roads and singletrack, even riding on city streets in heavy traffic. I ignored Mom’s advice of keeping electronics out of the rain and splashed through deep puddles. Verdict: it works everywhere.

In true 2015 fashion, there’s an app for it. Available for iOS and Android, the app allowed me to change riding modes. “Classic” for cruising, “extreme” for speed, and “elevated” for hills. 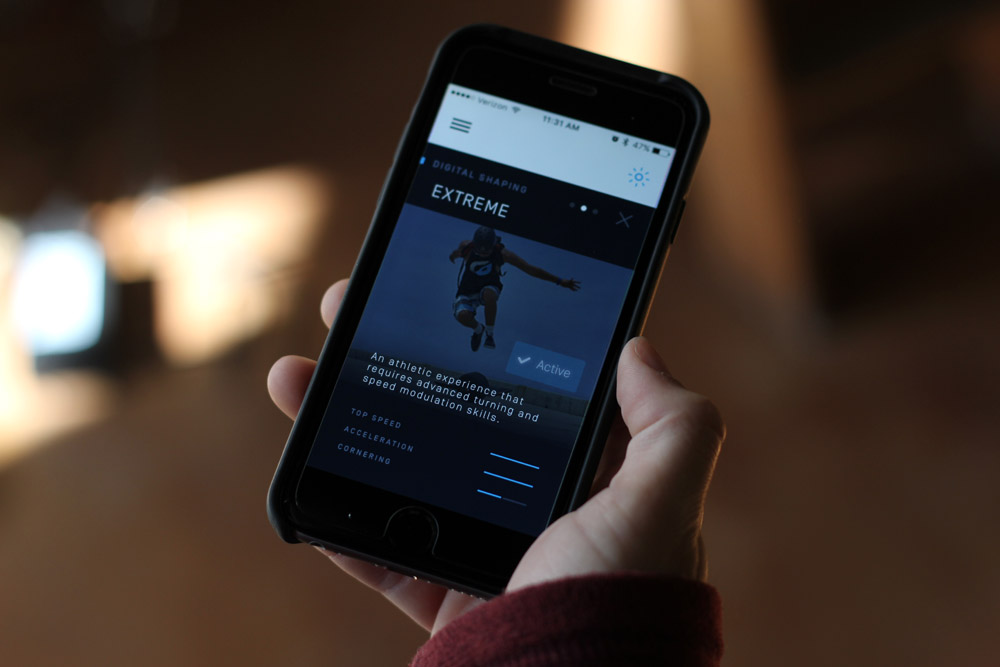 I could monitor board battery life and update the firmware using the app. What’s more, the app analyzed my riding and helped “shape” the board to adapt to my riding style — more dark magic.

Lights are the last unique feature of Onewheel. It has white LEDs for the front and red on the rear, so I could see and be seen on night rides. Since Onewheel knew which direction I was traveling, the color of the lights changed accordingly.

Awesome: Being able to take this off the paved trail and ride in the rain puts this in an entirely different category than other electric boards. The app ties the riding experience together and is easy to use.

I felt awesome riding it. It’s like I somehow managed to get the newest iPhone before anyone else, and my cool factor automatically increased. With that awesomeness came a lot of strange looks and questions on the trail. 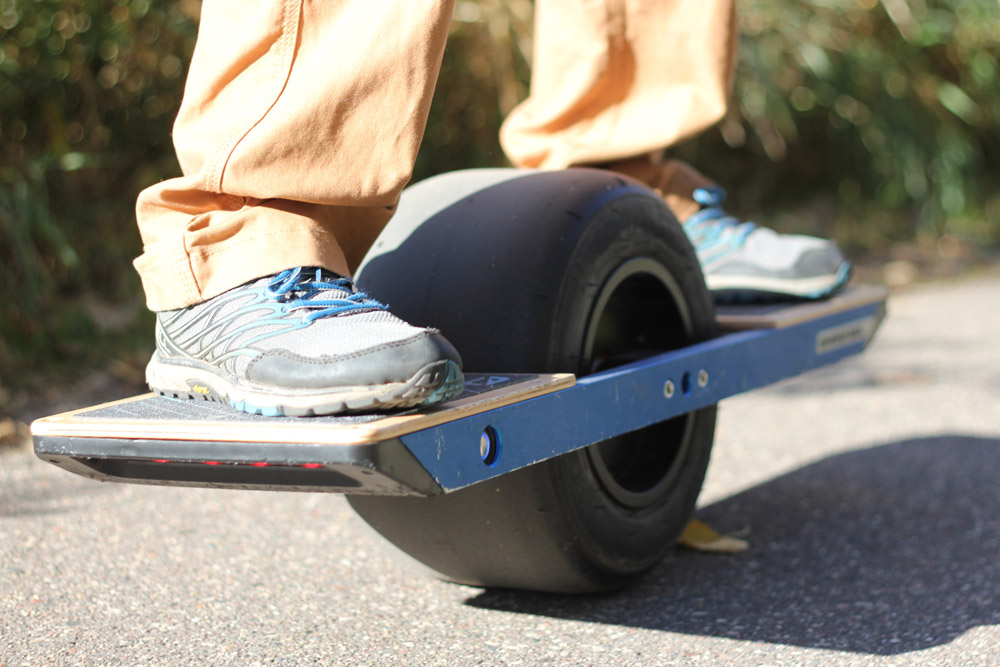 Flaws: Because of the sensors in the foot pads, I couldn’t really adjust my stance while riding or it would disengage. After some bumps and speed wobbles that happened, my nose dropped, and I went sliding across the asphalt at top speed. Wear a helmet!

When going top speed, I found myself leaning further back than normal. This goes back to the different riding position. I think over time I would adjust but it felt odd at first. I should note, too, that it’s less stable at high speeds than a regular longboard.

Onewheel doesn’t come with a fender. When riding on gravel or in the rain I got dirty and wet. The brand does sell fenders for $85. I didn’t test one, but it would be worth the investment.

Who should buy it: Commuters who would rather shred than bike or drive. It would also be helpful for last-mile commuters looking to get from their bus stop to their destination.

Verdict: It’s pricey and not the most practical choice for a full-time commuter. But, there’s an epicness to it that’s undeniable, so if you have the money and love to ride, Onewheel might be for you.