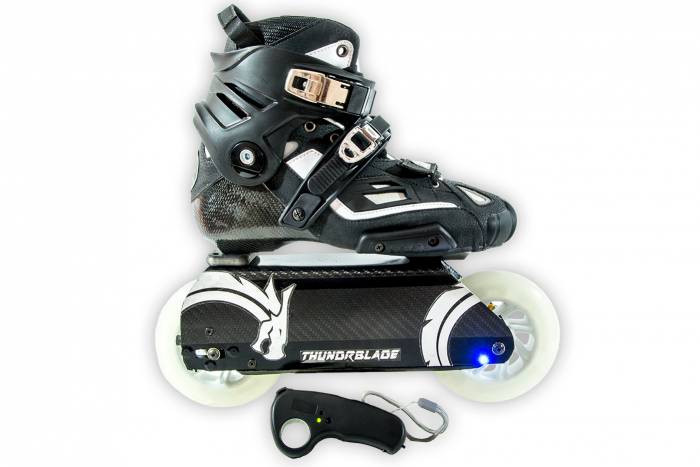 I have one pair of rollerblades. They’re somewhere in my mom’s basement and haven’t seen the light of day in 12 years. I’m pretty sure spiders live in them.

And whatever hope those skates had of ever seeing action again died quietly today with the launch of Thundrblades. These 21st-century inline skates tout dual 1,000-watt motors, light-up wheels, regenerative braking, and a 25-mph top speed.

Of course, because we’re a bunch of gear nerds, news of this product riled up the office. Our conversation went as follows:

Adam: You don’t know how to rollerblade. And you don’t have any jorts.

Nate: I can out skate you any day of the week.

And thus began another work day.

Clearly, we weren’t the only ones stoked on the news. In its first two hours on Indiegogo, the world’s first electric inline skates raised nearly $20,000, with more than a month to go.

But let’s pump the regenerative brakes for a second. Yes, these sound awesomely fun and supremely nerdy. And yes, similar tech has been used on skateboards for a while. Thundrblades makes some pretty bold claims though, and we’d proceed with caution before laying down hard earned money.

Read on to learn more, keeping in mind that we haven’t tested these yet. The claims come from the brand. But as soon as possible, I’ll be cranking up the Spin Doctors and taking these for a roll around the lake. Stay tuned!

Like me, most adults born before 1997 shared a serious and spectacular inline skating phase. And despite all evidence to the contrary, we all thought it looked cool. But the skates of old weren’t efficient enough for commuting or versatile enough for anything other than immaculate paved surfaces. 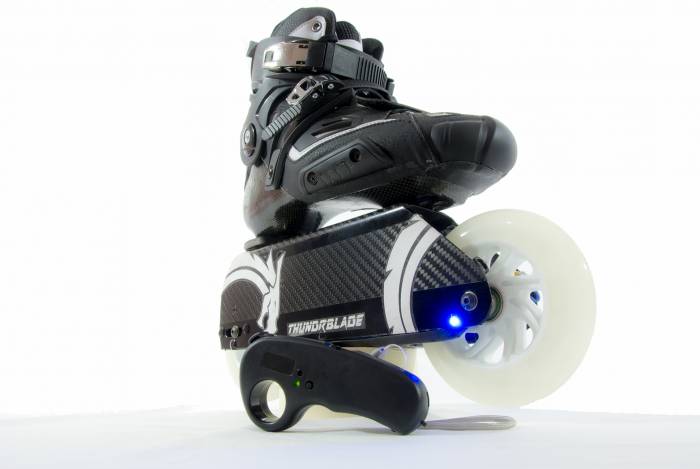 And that’s why Thundrblades appear poised to hit the bajillion-dollar mark in funding. Not only are these the first (that we know of) inline skates with electric-assist and full-power motors, they also come with off-road wheels! So the hotness will no longer be confined to parks and city sidewalks! 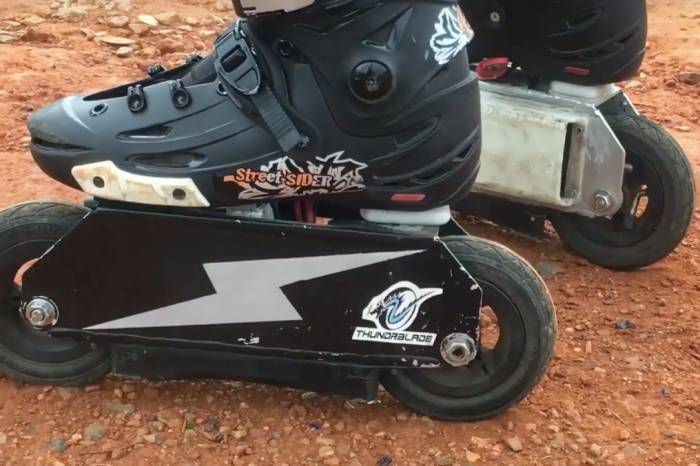 The Thundrblade system sits entirely in the frame, so purists can use their preferred skate boot. The brand says its system is compatible with any 165-mm UFS or SSM skate boot. But for those without a favorite skate boot (basically everyone), Thundrblades will also offer full carbon fiber skates.

Each skate sports two 125-mm wheels. In between sits a rechargeable battery and 1,000-watt motor controlled by handheld remote.

The brand claims that, on a full charge, the batteries can power the skates up to 20 miles in assist mode, or 7 miles if you’re not into the whole exercise thing and just go full throttle.

Even with regenerative braking, this claim seems like a longshot. Those specs go toe-to-toe with an electric bike we’re currently testing. Yes, this is possible, but we’re a little dubious of the range claimed here. That’s a lot of juice for what appears to be a pretty small battery.

The brand claims Thundrblades have a top speed of 25 mph, the ability to motor up a 20-percent grade, and go forward and reverse. All this packs into a 5 pounds-per-boot package.

And in case you’re worried people won’t notice your fabulousness jetting 25 mph in skates without moving your feet, Thundrblades have LED light-up wheels.

These are remote-controlled  inline skates with motors and off-road wheels that glow. And they double as normal inline skates if you want to get old school. Need we say more?

If they work as claimed, these could be a fun alternative to products like Boosted Skateboards. You can nab early-bird discounts on the Thundrblades Indiegogo campaign, starting at “just” $799.

If you get a pair, let us know how they roll! We’re waiting, jorts frayed and wrist guards ready.

Up Next: I Shot a Feature Film on a Pocket-Size Camera: Here’s How

Saving…
I Shot a Feature Film on a Pocket-Size Camera: Here’s How
Land Rover Builds a Phone Fit for the Outdoors
×