A recent trip to Channel Islands National Park proved that its little-known islands off the coast of Los Angeles are full of rugged adventures and surprises. Spoiler alert: There are adorable native island foxes everywhere.

A rain-soaked note on our picnic table read: “Attention Campers: The storm heading our way is looking more hazardous now. Due to the extreme wind gusts, rainfall, and swells expected, the ferry will not likely run tomorrow or even the next day. The last ferry off the island leaves today at 3:30 p.m. If you are unable to catch this ferry, find the ranger to bunk up with and he should be able to supply you with extra food if needed.”

My wife and I were spending a few days in Channel Islands National Park on Santa Cruz Island, 12 miles off the California coast. We’d planned for a lovely three-day island getaway complete with reading on the beach, kayaking in sea caves, and snorkeling alongside brightly colored fish. We suspected that hiking to cliffsides and camping under the stars were, unfortunately, vetoed by Mother Nature’s plans.

That said, our short time exploring the little-known national park a few miles west of Los Angeles surprised us with its abundance of remote adventure, untouched beauty, and powerful forces of nature.

A National Park of Islands

Half of Channel Islands National Park is under the waters of the Pacific Ocean. The other half consists of five mostly undeveloped islands. The only way to access each of the islands is via a reserved ferry, seaplane, or private boat. Each island has an established campground (reservations required), but no trash containers are provided and water is not available on three of the five islands. Popular activities include hiking, kayaking, snorkeling, scuba diving, and even surfing. 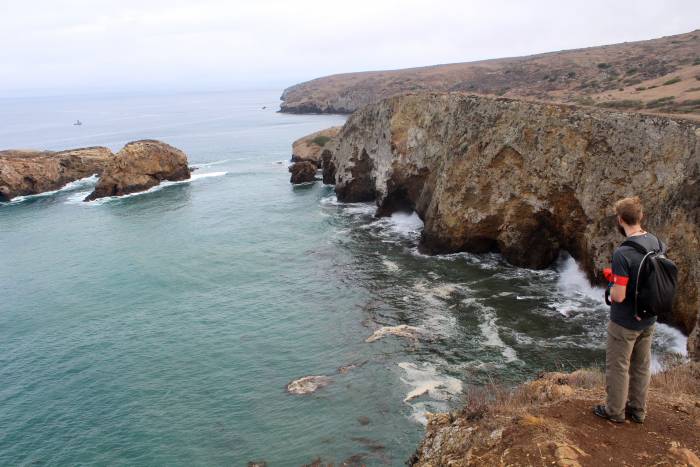 Santa Cruz Island is the largest island and usually the cheapest to access. We decided it would be a great choice for our three-day stay in late November and reserved our ferry ride ($158 total for two camper tickets) and campsite ($30 for two nights) online.

Ferrying From City to Wilderness

At 9:00 a.m. on Day One, we boarded the Island Packers ferry to Santa Cruz Island from the Ventura, Calif., harbor. We each carried a big backpack with our camping gear, food, and even our two-person packraft. We were joined by a local school group of about 30 people who, like most visitors, had plans for a short day trip before returning that afternoon. Only one other group of three people had plans for an overnight stay.

The 12-mile ferry ride typically takes an hour. Along the way, we saw sea lions, pelicans, and hundreds of dolphins. Our captain slowed the boat a number of times to let the dolphins swim close to the ship and jump around in our wake. Before too long, the southern California coast was faint in the distance as we stepped onto Santa Cruz Island.

A park ranger greeted the campers and informed us of the regulations: Limited drinking water is available, use the vault toilets, and watch out for the devilishly cute native island fox. We tromped to our reserved camp spot, Number 22, and set up our gear. The 31-spot campground had only two other campers that night.

We felt like we had the whole island to ourselves.

With the knowledge of some rain expected the next day, we carried our Alpacka Raft FX42 packraft and Aqua-Bound Whiskey Fiberglass four-piece paddles to the nearby shore. After a quick setup, we were on the water, paddling in the mellow waves above colorful fish.

We stayed close to the coastline, looking for the island’s renowned sea caves to explore in our boat. Eventually, we found a large cave where we bobbed in the water and ate a picnic lunch. A curious sea lion joined us in the inlet before heading out to deeper waters.

After lunch, we continued our paddle along the towering cliffsides. 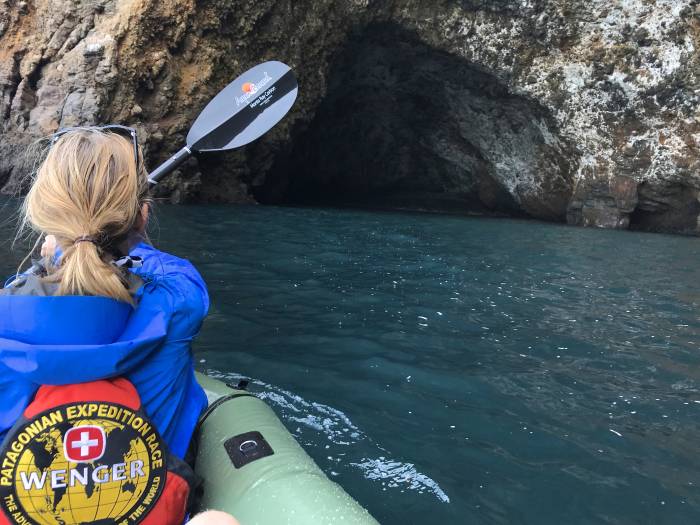 We attempted to round a corner of the island but were denied by the fierce wind and growing waves. We took the cue to turn around and head back to shore. Once back on land, we hiked a 4-mile loop trail to a couple of cliffside overlooks: Cavern Point and Potato Harbor. Potato Harbor was a gorgeous overlook of two picturesque coves and topped the list of our favorite hikes on the island.

That night, we ate a freeze-dried lasagna dinner and watched the island foxes scurry around in search of mice and insects.

On Day Two, we woke up early to set off on a longer 12-mile loop hike. A ranger told us that part of the trail is technically just a “social trail” and that route-finding and off-trail hiking would be required. The loop combined the Scorpion Canyon, Montañon Ridge, and Smugglers Road trails. Once up on Montañon Ridge, 1,808 feet above sea level with expansive views of the island, we bushwhacked our way down the ridge to see Smuggler’s Cove on the south side of the island.

That’s when the clouds began to roll in. A slight drizzle formed, and we trudged our way from Smuggler’s Cove along an old rancher’s road back to camp. The 12-mile loop took us seven hours to complete, with the off-trail navigation and the 3,310 feet of total elevation gain slowing our pace a bit. The hike offered a surprisingly diverse and rugged challenge for an island trek.

Exhausted, we took a seat at our picnic table where the ranger’s warning note, quoted in full above, awaited us. We learned we could possibly become stranded on the island for days if we didn’t catch the last ferry at 3:30 p.m.

Gulp. I looked at my watch. Somehow, we had completed our 12-mile trek with an hour to spare before the ferry left the island. We sprang into action, hastily packing up all of our drenched camping gear. A ranger, speeding by in a four-wheeler, saw us at camp and rushed over. He explained the storm’s increased danger and the park’s decision to evacuate all visitors today. Earlier that day, he’d driven along a few of the rancher roads in an attempt to warn us and pick us up, but he’d been unable to find us.

We didn’t have enough food to last us two extra days, and we didn’t feel like riding out a massive storm on a remote island. So we hopped in the ranger’s ATV with all of our gear and boarded the ferry at 3:28 p.m. A mile out to sea, we looked back to see Santa Cruz Island covered in a blanket of dark clouds. Forty-five minutes later, we were back on the mainland where surfers were catching massive waves before the more dangerous swells rolled in.

Ultimately, the storm proved to be less intense than predicted. Mother Nature got us with her bluff.

In total, we spent 29 hours on Santa Cruz Island in Channel Islands National Park. It was a whirlwind, but we left with no regrets having hiked 16 miles, camped in seclusion, and packrafted in a few sea caves. The island is beautiful, offering a glimpse of what southern California likely looked like before its urbanization.

If you’re looking for a remote island experience, Channel Islands National Park should be on your list. And if you live in Los Angeles, consider leaving the concrete jungle for a weekend in the true wilderness. With five unique islands, there’s a lot to explore. Just be sure to keep an eye on the weather!

Up Next: Slope Chauffeur: Liftopia Offers Bus Service for Skiers