America’s National Park Service centennial celebration is drawing to a close. But the party’s not over, Canada is welcoming everyone into its parks free for all of 2017.

Canada’s wilderness is legendary, and about to get better, because what’s better than free?

Not only will Canada open the world’s largest trail in 2017, but it’s making access to every national park free for 365 days.

Canada has 47 national parks (compared to 58 in the United States), though it’s unlikely many people could name more than a few.

In an effort to alleviate my (and let’s be honest, everyone else’s) ignorance, and to honor the nation’s 150th birthday next July, Canada announced the Discovery Pass.

This pass is free for literally everyone on Earth. And it doesn’t just cover national parks. The free admission extends to the Maple Leaf’s 171 National Marine Conservation Areas and National Historic Sites.

Here’s one spot you can visit in each of Canada’s 13 provinces and territories.

Elk Island National Park: Get a great look at some elk and a lot of bison! This park is home to the Wood Bison handling facility and is refuge to over 250 bird species. 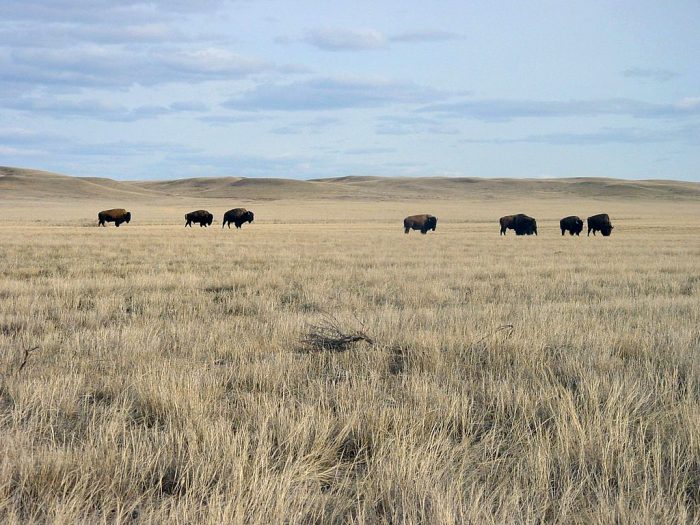 Grasslands National Park: Once a refuge for Sitting Bull and over 5,000 Sioux following the Battle of Little Bighorn, Grasslands is now a premiere tourist attraction. You can camp, look for dinosaur fossils, and take an old wagon ride.

Bruce Peninsula National Park: Get your boulder on. Lots of cliffs and escarpments to keep your calluses tough. For non-climbers, there are plenty of hiking trails and camping spots.

Mingan Archipelago National Park Reserve: Near the north shore of the Gulf of St. Lawrence spreads this chain of more than thirty limestone islands. It is a photographer’s delight, where ocean currents created fantastic rock formations over millennia.

Fundy National Park: This is a great spot for budding explorers. At low tide, look for fossils and sea creatures. At high tide, walk through the park and check out the 25 waterfalls.

Cape Breton Highlands: This park is equal parts hiking and wildlife watching. The canyons, cliffs, and seaside here are home to moose, bald eagles, and minke and pilot whales.

Prince Edward Island National Park: What it lacks in imaginative naming, this park makes up for in natural beauty. But the trademark sand beaches and freshwater inlets have been dubbed the most endangered natural habitat in the Canadian park system due to human impact.

Gros Morne National Park: Gros Morne is named after the island of Newfoundland’s second-highest peak. Here you can beachcomb, hike gorges, and peer over steep fjords. This is also a UNESCO World Heritage site.

Ukkusiksalik National Park: This place is not for the faint of heart. You will almost certainly encounter bears here. Maybe grizzlies, maybe polar bears—yes, really. If you don’t believe me, go there and see. Just remember the Canadian government requires you to pre-register before your visiting so they can prepare for a rescue. Yes, really.

Nahanni National Park Reserve: This is an ideal spot for canoeing, kayaking, and whitewater rafting. After a full day of paddling in the cold waters, relax in one of the many natural hot springs.

Ivvavik National Park: The most rugged of the national parks on this list, Ivvavik is the first Canadian national park established from an aboriginal land claims agreement. Much of it undeveloped, meaning no roads or trails.

Up Next: ‘Hotel In Alps’ Is Surreal Mountain Retreat