I took Goal Zero’s latest battery pack and solar combo — the Sherpa 100AC Power Bank and Nomad 28 Plus Solar Panel — to Nepal to see watt all the fuss is about.

Batteries are the bane of the modern traveler. Whether traipsing around the backwoods or vagabonding through Asia, our inventory of power-hungry widgets needs continual feeding. It’s for that reason I never leave home without backup power like the new Goal Zero Sherpa 100AC Power Bank and Nomad 28 Plus Solar Panel.

Jane Kibii grew up in rural Kenya without electricity. After running professionally in the U.S., she was able to fully equip her family's home with solar BioLite lights. Read more… 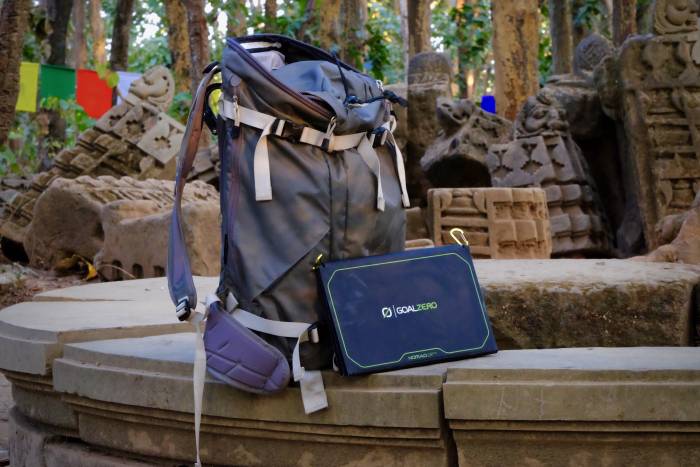 Released in September, the Sherpa 100AC represents the latest evolution in charging tech. Many systems rely on big capacity as the primary selling point. But with this kit, Goal Zero placed a high priority on versatility, convenience, and functionality. Its ultraportable charger is a comprehensive power management system designed to serve a complex array of electronic tools. 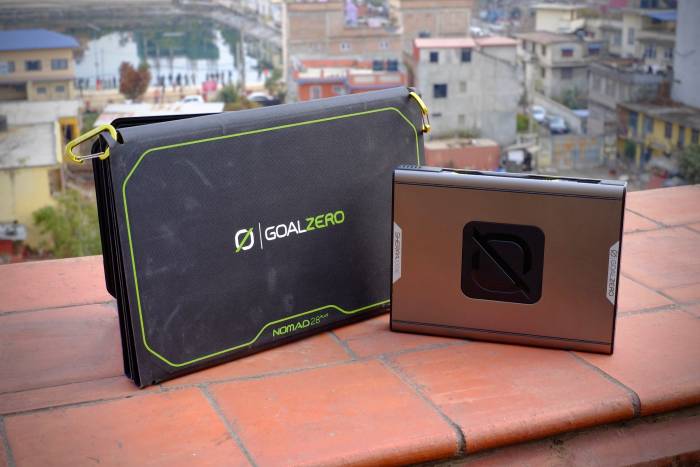 Housed within its all-metal shell, the Sherpa’s compact lithium-ion NMC battery stores an impressive 94.7 Wh of power. In lay terms, that’s roughly enough electricity to charge a smartphone 10 times, a tablet more than twice, and it will power my MacBook Air for up to 6 hours if I use only basic functions. Although I could always benefit from more power, the Sherpa packs the maximum amount allowed on commercial aircraft.

With the launch of the Verde treadmill, sustainable fitness equipment-maker SportsArt is at the forefront of producing electricity as a byproduct of human exercise. Read more…

It weighs in at just 2 pounds, with dimensions scarcely larger than a paperback (7.5 x 1.0 x 5.68 inches). The slender shape easily slips into a backpack or carry-on. Better still, the smart design includes recesses on the sides to store two heavy-duty charging cables.

Since using the Sherpa 100AC, I have retired my rat’s nest of tangled charging cords. Hallelujah to that. For convenience, the kit ships with four sturdy cables: USB-C to USB-C, micro-USB, Lightning, and a 30-inch-long USB-C cable.

As a self-diagnosed power junkie, the front panel makes me swoon. It features two USB-C PD (power delivery) ports with 60 W of regulated output and dual 2.4A USB-A ports. USB-C PD is fast becoming the standard for all small electronics due to its rapid-charging capabilities and ability to simultaneously transfer power and data through one cable. 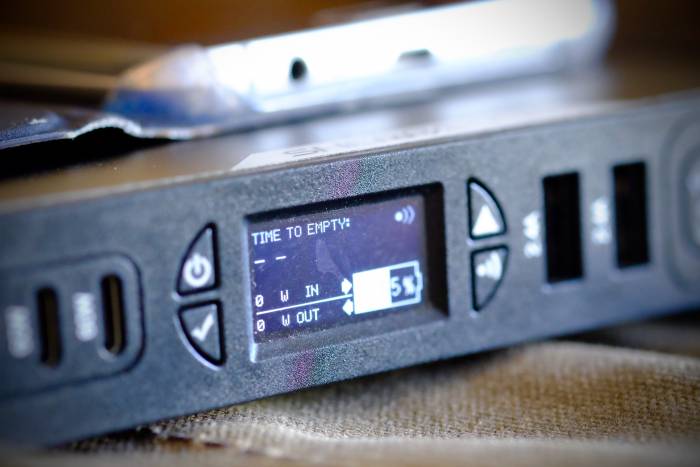 The most useful port on the Sherpa is the integrated 110V AC outlet. Perfect for charging DSLR batteries and laptops, it adds a bit of old-school versatility to a high-tech tool. The slickest charging option is the Qi wireless pad atop the shell. Simply place your compatible phone or wearable device on the Sherpa 100AC and charge away, no cord necessary.

As a globetrotting journalist, there are many occasions when my demand for power outstrips the supply, even with a large-capacity battery like the Sherpa. In those scenarios, I rely heavily on the easy-to-read OLED screen to help dispense just enough power per device to get me through the day.

The readout indicates charging levels per port as well as the time to empty or full. That helps me regulate the power on hand. On my recent trip to Nepal, I had to regularly split power between my satellite phone, GPS unit, and camera batteries until I could get to a wall outlet to top off.

For occasions when electricity isn’t readily available, the powerful Nomad 28 Plus Solar Panel is extremely handy. The four-panel system weighs just 3 pounds. On a sunny day, it replenishes the power pack in as little as 6 hours, although that requires constant tending to ensure optimal alignment. I would say the average probably hovers around 8 to 10 hours with strong sunlight. 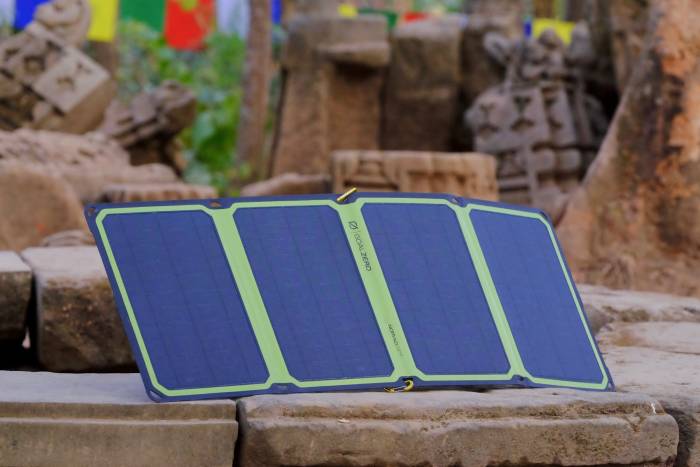 That’s quite impressive for such a small and portable panel. Even while holed up in my hotel in Kathmandu, a daylong power outage made for the perfect opportunity to plop the solar panel on the roof. The ability to make and store large amounts of electricity has changed how I travel. I never fully acknowledged my rapacious appetite for electricity and how dependent I once was on wall outlets.

One of the challenges with any solar panel is keeping it properly aligned with the sun. The Nomad’s foldout kickstand keeps the solar cells angled properly. An LED indicator confirms the system is getting maximum light. The back pocket offers ample space to store the attached charging cords, and a regulated USB outlet allows for direct charging from panel to device.

The best way to evaluate any travel tool is to live with it daily in far-flung places. After three weeks using them as my only power source, I’m hard pressed to find fault with the Sherpa 100AC or the Nomad 28 Plus Solar Panel. Both performed flawlessly. If I had but one minor quip, it would be with the lack of a dedicated charging block. 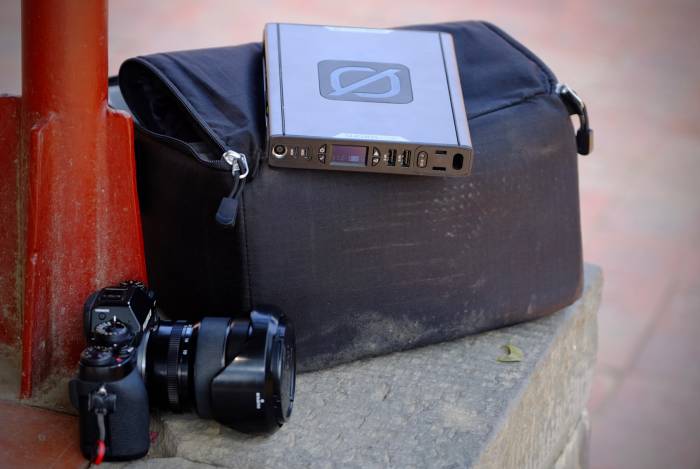 I happened to have a Goal Zero charging cord from my previous Sherpa 50, an add-on purchase. Most people will resort to charging the system with a standard charging block plugged into one of the two input/output USB-C ports. In that configuration, the time required to attain a full charge can be just 2.5 hours — if you have a higher-power block. A standard block can cause charge times to drag on for 9 hours or more.

There is a lot to love about Goal Zero’s latest kit. The 500- to 1,000-cycle lifespan, depending on output charge levels, assures it will be around for many adventures to come.

Although not designed with the rugged outdoor brawn of some of the brand’s other charging tools, if well protected in the optional neoprene sleeve, I see no reason why the Sherpa 100AC won’t survive most backwood boondoggles. As an adventure travel tool, I wouldn’t bring along anything else. I thought I might regret lugging around 5 pounds of panel and power pack, but it proved worth every ounce. 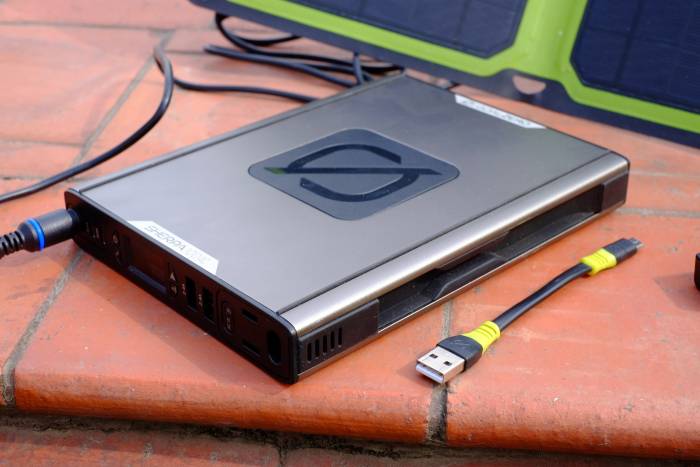 It’s unlikely many of us will return to simpler days and leave our electronic gadgets at home. The $550 combined price of these two might keep some people looking elsewhere for cheaper options. But I think the value is commensurate with the performance. Besides, you can’t adventure far if you’re constantly searching for wall outlets.