With ‘Star Wars: The Force Awakens’ frenzy reaching new heights, we stepped back to look more objectively at uses for the film’s flagship weapon, the lightsaber, and its utilitarian applications in life everyday and in the outdoors. 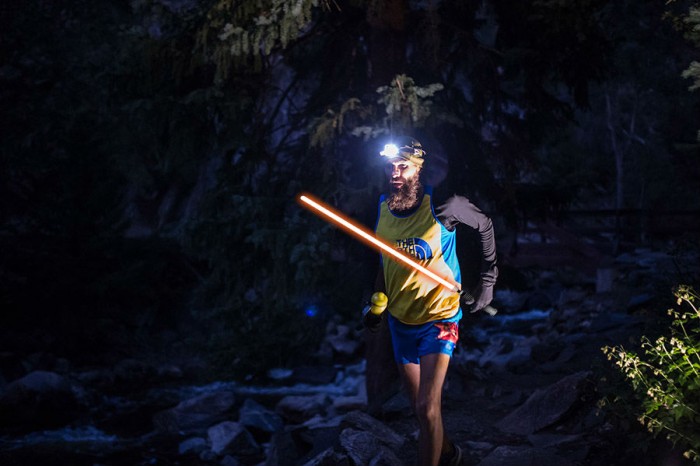 If we could have lightsabers, we’d use them for way more than living out epic childhood wrapping paper tube battles. Here’s our list of what lightsabers actually could (and could not) do if they were real (which they absolutely are not, we think).

You’re lost in the woods, it’s getting dark and the ominous cry of hungry coyotes echoes in the distance, what will you do? BWUMMMVVVV! Fire up your handy-dandy, brush-clearing, varmint-deterring night light, aka Sunspot multitool.

Why it would work
With the Sunspot multitool, pesky twigs, branches and trees you’d rather not look at are vaporized before your very eyes! No more nicks, scratches or gouged eyeballs as you run panicked through the forest — clearing a path has never been so easy. Plus, the patented BWUMV-BWUMV sounds emitted by the Sunspot are a natural deterrent to squirrels, bats, coyotes, bears, whales and stormtroopers — blaze a path with confidence! Best of all, you can find your way with ease when using the Sunspot as a torch. Light a path from the Dark Side with an eery field of illuminated plasma, available in any of your favorite hipster colors!

Why it wouldn’t
For the most part, this would be a marvelous idea, with the exception of two key problems: power and heat. Most regular flashlights suffer longevity issues, the best and brightest will punch out after a few hours of continuous use. Granted they’re not suffused with the power of the Force like a lightsaber is, but everything needs batteries.

The second issue is heat. As you’re sprinting through the woods slicing through underbrush with overconfident arcs and slashes, that blade of superheated plasma would almost certainly ignite something — old branches, dry leaves, or a family of rabbits. Seriously, that’s how it went down with Bambi.

In over your head, 1,000 feet in the air at the crux of the climb, your legs begin to shake as you look around desperately for another hold… 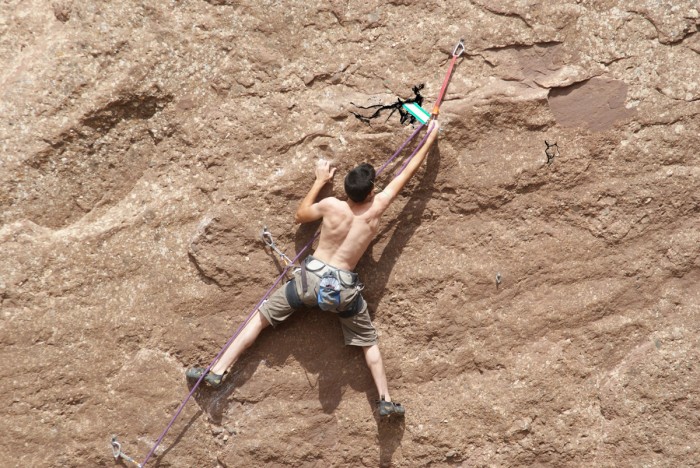 Time for the patented Lazer Hold. The go-anywhere, cut-anything plasma blade that effortlessly cuts into sheer rock to give you another step to the top.

Why it would work
Anyone who has climbed — inside the gym or out on the cliff — has been there: far from the top, farther from the deck and your grip starts shaking. If only you could grab something closer, a little crack to slip more than just a finger or toe into. Thanks to the wonders of (far-off) science, these predicaments are (not) a thing of the past! With the push of a button a perfect, indestructible blade of light is at your disposable to carve out exactly the hold you need.

Why it wouldn’t
The idea is great, but both the DNR and experienced climbers alike would police this right out of existence. It’s one thing to drill a bolt into the rock face, it’s quite another to start carving holes all up and down one of Earth’s natural wonders in a Choose Your Own Adventure-style climbing route. Every yahoo with a bucket list and a few hours to kill would start building stairways right up the side of K2. It would be most bogus. 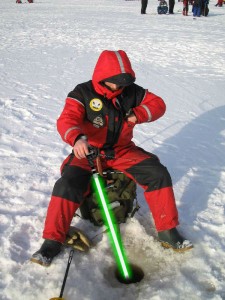 It’s America’s favorite pastime — sitting inside a dark tent, on a massive sheet of ice, drinking cheap beer, and staring at a hole all day long. What could be better? If only there was a way to make all the sitting and staring and drinking even less work — now there is! With the Lightning Lance, ice fishing has never been so hassle free!

Why it would work
Quite literally the only hard part of ice fishing, other than deboning a pike, is augering the hole. Even if it’s a gas-powered auger, it takes some muscle and plenty of patience to get a good staring hole — er, fishing hole. With a Lightning Lance, a beam of ultra-hot plasma sears cleanly through even the thickest ice, leaving a precise, perfect staring hole.

What’s more, you can keep your icehouse toasty with this relic from a galaxy far, far away. Plus, if you get tired of staring at the hole, you can cozy up to the Lightning Lance and read a book — about beer, or ice, or holes.

Why it wouldn’t
While it would be pretty gnarly to witness a light saber slice through a foot of ice like wet tissue paper, this would probably cause more problems than it would solve. First of all, using one of the most storied, sacred weapons in the known universe as a personal space heater is sacrilegious, to say nothing of being an outrageous waste of energy. Again, so many batteries. The real problem, though, is the beer. Specifically, the likelihood someone will leave their Walmart light saber running after a dozen or so Keystone Lights. It’s hard to say how long it would take a Jedi’s sword to melt through an entire lake, but it’s pretty likely we’d find out if every ice fisherman had one.

Everything’s packed for your week away from civilization: toothbrush, compass, wool socks and 37 cans of corned beef hash and Beefaroni. But wait, did you remember to pack the can opener? Or worse yet, did that beleaguered can-opener crank break, leaving you the tedious task of stabbing out a circle and prying out the razor-sharp, serrated lid? 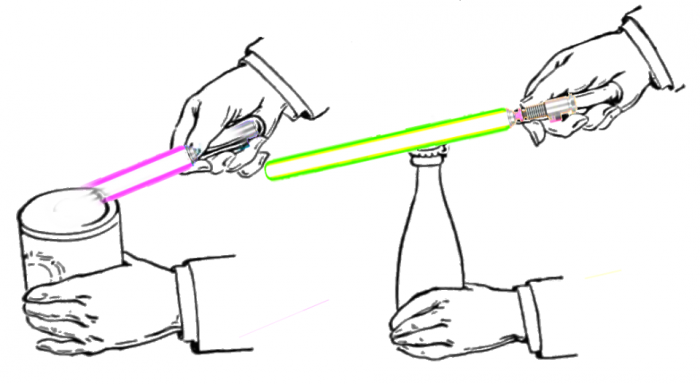 Thank goodness this is the future and you remembered to pack the EverSharp Omni-Opener! Cans, bottles, jars with stuck lids — let nothing stand in your way!

Why it would work
Just imagine, one tool that opened everything. No more twisting cans or tugging on corks; no more searching high and low for a left-handed tool; no more running stuck lids under hot water. Just open it the way nature intended, with an ungodly hot beam of light energy from the farthest reaches of space. Glass, metal, plastic — nothing can withstand the might of the EverSharp Omni-Opener. Want it? Open it.

Why it wouldn’t
There’s a very wise saying: When all you have is a hammer, everything becomes a nail. Think about it, if you had a miniature light saber that could cut through anything, would you take the minute or so to cut around the lid? Or would you do the awesome thing and slice the can clean in half? Thought so. Corkscrew, why bother? Who would ever get tired of slicing the neck off a wine bottle? Though to be fair, this would come in mighty handy when a lid or cork was just plain stuck. BWUMMMVVV!

It famously happened to Aron Ralston (aka James Franco) on his trek alone in the Utah desert. You pray it never happens, but for some the scenario becomes a reality. We all remember watching that excruciating scene in Ralston’s story 127 Hours. Should you find yourself in a medical emergency in the wild that calls for drastic measures, count on the Saving Blade to safely and quickly mitigate the most dire circumstances. 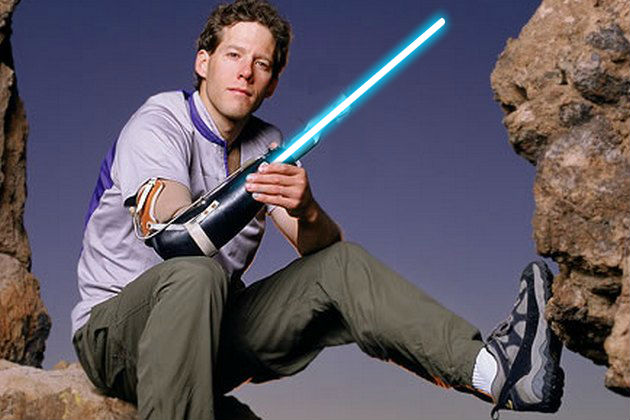 Why it would work
Snake bites, trapped limbs, bleeding emergencies — these terrifying scenarios would each be made less severe with a cauterizing lightning blade. Plain and simple.

Why it wouldn’t
This is probably not the worst idea. While it’s not a wonderful concept, it would likely save a life where a traditional blade would not. There is one glaring hiccup however; it’s proven that sometimes the user might vanish into oblivion at the slightest touch just like Obi Wan did. Nothing left but a pile of clothes — should be listed in the fine print.

Making Toast As You Slice It

The future is now. It turns out the best thing since sliced bread is, in fact, sliced toast. Generations of painstaking innovation and training have at long last given way to a tool of such meticulous design and tireless innovation, it may in fact be perfect. Never again will leaving the comforts of home for the great outdoors mean having to muscle through a chewy bagel or force down a floppy piece of bread. At long last man has a means of making toast on the go — with the Saber Toast Tiger you can finally eat bread the way nature intended, in toast form. 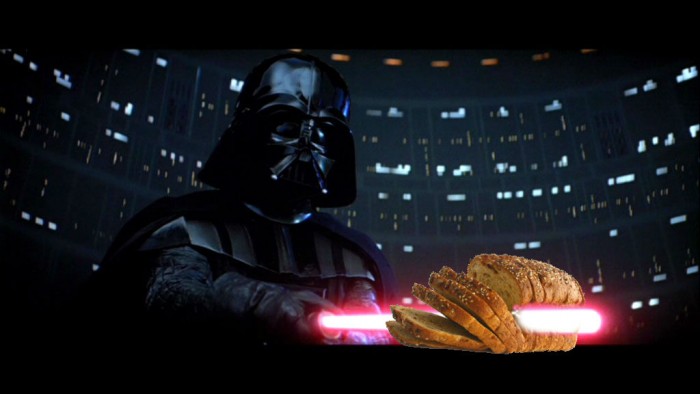 Why it would work
Just think: toast on the go, english muffins on the double, potato chips in a pinch, cookies on the fly — instantly cook anything to crispy perfection as you slice it. With one swipe of the Saber Toast Tiger you have an instantly toasted slice of almost anything! If it’s in a loaf, Saber Toast it!

Why it wouldn’t
There is nothing wrong with this idea. It is perfect.