An ounce of prevention is worth a pound of cure. Here’s what you need to pack for a day (and night) in the treestand to ensure you’re fully prepared.

I was walking along the edge of a soybean field in late September. My stand sat about 100 yards ahead, tucked into a hedgerow separating the field from a pasture where deer historically bedded on the property. An early-fall cold front left the mosquitoes lethargic and, I hoped, put deer on their feet earlier than usual.

I was 17 and poised for an exhilarating — and successful — day. What I didn’t know was that my bow release had fallen out of my pocket about 10 steps from the truck. Ever since then, few things feel worse to me than being unprepared. And in hunting, as in life, that sinking feeling of missed opportunity sticks with you.

So to help ensure you’re ready when opportunity knocks at your treestand, here’s a rundown of the essentials to check and recheck you have in your pack. 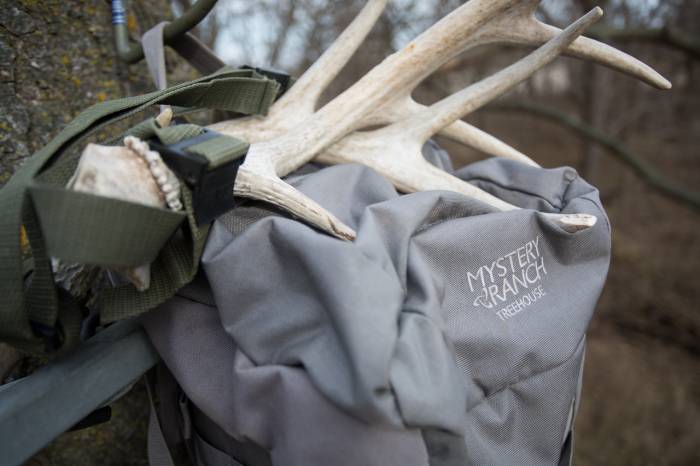 Hunting Pack: Yes, You Need One

I never hunted with a pack until the “stuffing things in your pockets” approach failed (see above). And now that I have one, I’ll never hunt without it.

Today, I use a Mystery Ranch Treehouse pack. But whatever pack you use should make hauling your gear to the tree and finding your stuff once there easy. If it doesn’t do that, find a new dance partner.

Need some ideas? Check out our list of favorite hunting packs. 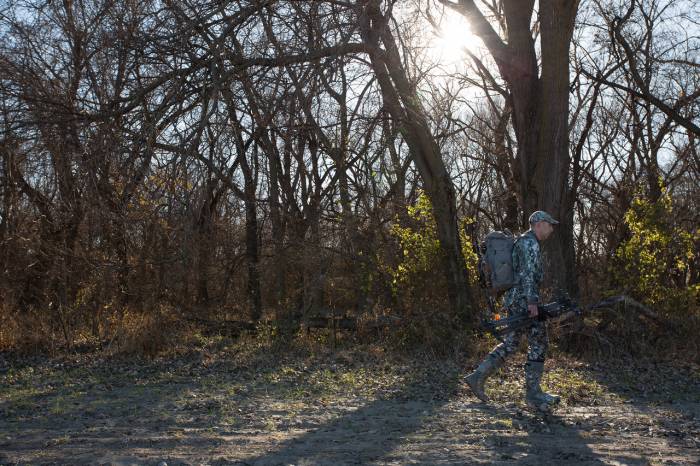 To start with, there are three things that should never leave your pack: an extra ratchet strap, a rangefinder, and an extra release. No matter what else you’re packing, just toss these items in at the outset and forget about them until you get to the tree. You’ll also need a harness, a field dressing kit, and a light source or two.

I hunt almost exclusively out of hang-on tree stands, and a solid 1-inch ratchet strap is usually the only thing standing between me and a test run of my safety harness.

Always check your strap before climbing on the stand. The last thing you want to see once first light hits is a half-chewed strap holding your stand to the tree. On average, I replace two to three straps during the course of a season. No deer is worth a 20-foot fall, so stash the ratchet strap in your pack and be ready to use it.

I’m sure there will be someone boasting in the comments about how they’re the human rangefinder and don’t need modern technology to shoot a deer. That person is also probably shooting a compound bow with aluminum and carbon arrows.

For the rest of us, rangefinders are an absolutely essential tool for hunting deer. Often, I’ll only use it the first time I hunt a stand because I prefer to range landmarks and not worry about switching from rangefinder to bow in a hurry.

But I always keep one in my pack and then transfer it to an easily and quietly accessible pocket.

Whether you use a wrist-style or thumb release, these are mechanical devices that can and do break. And you (and I) are human, so we might also lose them. Either way, an extra doesn’t hurt.

Besides just carrying one with you, it’s important to shoot with the backup too. If you can, keep two of the same make and model. But if your shooting form is good and you’ve shot with both releases, it really shouldn’t matter that they’re the same, so long as you have confidence in them.

If you don’t wear a safety harness in a tree stand, then according to my mom, we can’t be friends. Seriously though, it’s the most important piece of equipment I bring to the tree. No one has ever fallen out of a tree (nap-induced or otherwise) and thought, “Man, I’m sure glad I didn’t take the extra 20 seconds to put my safety harness on.”

I’ve luckily never needed mine, but I’ve read plenty of stories to know that it’s better to be safe than sorry.

Often, bringing along a field dressing kit can feel somewhat over-optimistic. But it can be a hassle to walk back to the truck for a bone saw or latex gloves if lightning does happen to strike. This is especially true if you find yourself well off the beaten path.

I carry a separate knife to do the heavy lifting, but the bone saw and gloves make things quite a bit easier in the field. It’s usually a good idea to throw in some wet wipes and a pen (for signing that carcass tag!) as well.

If, like me, you’ve ever found yourself trying to field dress a deer at night with a flashlight in one hand and a knife in the other, save yourself the trouble and get a headlamp.

I prefer to use a headlamp that can alternate between white and red lights. Red is nice for morning entries and getting things set up in the stand without letting every deer on the hoof within a quarter-mile know you’re there.

Since we’re not talking about deep backcountry hunts where every ounce matters, I also carry a flashlight for good measure. As a matter of personal preference, I carry a strong LED flashlight for blood tracking.

It’s also nice to have a backup in case your headlamp somehow turns on in your pack after your last hunt and saps the battery. Again, I should know.

The following items round out my usual pack checklist:

These Are a Few of My Favorite Things

I know it looks like a long list, but most of the items mentioned do have a purpose, even if they don’t see constant use. As with everything else in life, preparation is key.

I will sleep better the night before a hunt knowing that everything I might need is all in one place. And you will too.

Up Next: Water Power: 3 Standouts From Evinrude Engines’ On-Lake Demo