The fastest known time (FKT) is a growing sport in its own right. Often combining backpacking, trail-running, climbing, and navigation, these record-setting outings are another way to get outside. Yes, big-name, professional athletes are most certainly chasing those FKTs. But the beauty of it is that anyone can go for it.

And that’s exactly what Sara Aranda and Emma Mure did. Fueled by a passion for getting outside and helped by winning the Adventure Grant, a project GearJunkie produced with NordicTrack, the duo set out on August 12 to tackle Wyoming’s rugged Wind River Range. On August 15, they finished victorious. With a time of 3 days, 17 hours, and 20 minutes, they set the new FKT record for the Wind River High Route.

We caught up with Aranda to learn what it takes to push your body past its limits, face fears, and make a dream come true.

GearJunkie: What inspired you to take on this traverse in the Wind River Range?

Aranda: Two years ago, Eliza Earle and I visited the Cirque of the Towers in the Wind River Range for the first time. We packed in over 50 pounds of gear, each, to spend a week climbing there. I was blown away by the remoteness and the beauty. Ever since then, I have wanted to return, but in a different way. 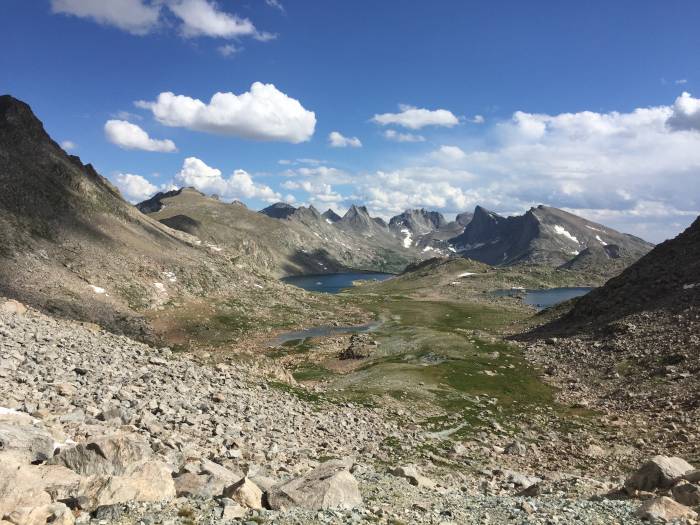 Trail running is another passion of mine, so the notion of running trails through the Range with lighter packs was how it all started. By the end of last year, it somehow expanded into the idea of a long traverse. Emma had just raced the Leadville 100, and thus ultrarunning was at the forefront of my awareness.

But I was coming off of a nearly 2-year string of overuse injuries. When I was finally able to start running again last summer, I not only picked a small goal of running 30 miles for my 30th birthday (December 2018), I also wanted something big to push for in 2019. When I started doing research for a long route across the Wind River Range, I came across Andrew Skurka’s website, and I was hooked.

Beyond The Gear: 9 Questions With Andrew Skurka

Long-distance backpacker Andrew Skurka tells us about his cat Oden, his favorite gear, his next big adventure, and his stint as a camp counselor in our exclusive interview series, Beyond The Gear. Read more…

How did you prepare for such an intense traverse?

I’m one of those people that loves spreadsheets and itineraries. Just after New Year’s 2019, I sat down and literally created a rough draft for what my training schedule might look like for the following 7 months. I worked backward from August, which I knew would be the prime time to visit the Range.

But I hit several walls that nearly derailed me. In January, I strained my psoas and had to take all of February off. Then in March and April, I had severe shin splints trying to play catch-up; they were so bad I thought I had a stress fracture. I kept having to back off and as time went by, the worry of having enough time to train was overwhelming.

When I realized I had actually won the GearJunkie Adventure Grant, I was both over the moon and horrified. I was committed now, and yet my body wasn’t where I wanted it to be. In order to compensate for the reduced running mileage required to heal, I biked and swam instead. I began to see a chiropractor and massage therapist in order to learn all I could about the mechanics of my body.

It truly wasn’t until June that I felt whole and stable while running, which meant I only had 2 months left to jack up the miles and time spent on my feet. But I could see and feel the difference in my legs. They were so much stronger and more well-rounded than ever before. After a trial run in New Mexico and a couple weeks acclimating in Leadville, Colorado, it was go time. Things were as iffy as ever, but that’s life. All we could do was try.

A week before departure, I chatted with D. Lynette St. Clair over the phone. She’s Eastern Shoshone, a descendant of Chief Washakie, resident of the Wind River Reservation, and education director at the Fort Washakie school.

I wanted to make sure I did all my homework, and this included getting to know the original occupants and history of the land. Her main request was that we arrive and leave with respect. She advised us to listen to the land and to prepare ourselves spiritually.

Beyond the physical and mental training, I also spent countless hours mapping and studying Google Earth. It became an obsession to map our path as precisely as possible. I purchased Andrew Skurka’s “Wind River Range High Route Guide,” which came with topographic maps and waypoints but no clear route lines (which is the fun of orienteering anyway).

I took it upon myself to memorize the maps as much as possible so we wouldn’t waste time navigating. And that was one of the neatest aspects to my preparation — being able to finally see, in real life, what I’d studied dozens and dozens of hours on paper.

What was the scariest or most unexpected part of the trek?

Everything was farther and steeper than we could have ever imagined. On the first day, the summit of Wind River Peak was only supposed to be 17.5 miles. By the time we summited, my watch had us over 19.5 miles.

While I recognized my watch was creating more accurate waypoints of our track, we couldn’t have predicted things to be off by so much. It’s no surprise that utilizing tight switchbacks up steep terrain, whether rock or snow, would add up big time after a while.

In regards to the scare factor, there were quite a few moments for me. On Day 3, Emma and I lost each other for 2 hours, both of us worrying about worst-case scenarios, which my full trip report outlines in detail.

That night, I also had intense convulsions, shaking, and mental incoherence, which had me medically concerned. On our final day, I had to confront my fear of falling as we scaled a hard-snow slope in crampons.

While each of these moments was fairly brief, it was fascinating to navigate confidence and fear so fluidly throughout the entire trip. It was a matter of meeting myself where I was, feeling the fear, and trusting my body all the same. It was never a question of ability, so it came down to that mental fortitude.

Anything that stood out as particularly awesome?

Experiencing the landscape so intimately was surely the highlight. Seeing the beauty and health of all the biodiversity — from the wildflowers to the different colors of mosses, lakes, creeks, lichen texture, elk poop — was enlivening.

The contrast of snow and rock, rounded mountains and jagged mountains, white snow and red algal snow, flat snow and rippled snow, hard, soft: Everything was in a constant push and pull for balance.

What advice do you have for anyone dreaming of an FKT?

I think the best manner of approach is doing as much research as possible — so much it almost makes you look crazy to others. But turn that crazy into confidence.

Especially as an unknown woman in the arena, I felt the added pressure of having to prove myself all the more. We were not only vying for the first female FKT on this route but were aiming to at least match Skurka’s time (if not beat it).

Sacrifices will be made. I’m a freelancer in my normal life, and I didn’t make a single dime while training for this. (And if I didn’t win those grant funds, I’d be in so much debt). Relationships might suffer, but you do the work and you put in the time. Even if you don’t gain the result you were after, you gave everything you had.

Lastly, what’s next? Do you have your next adventure planned?

First and foremost, my art needs desperate attention. I’m looking forward to drafting a creative essay based on this whole adventure and collaborating with friends on potential film projects.

Secondly, I hope my feet will heal up quickly. I still have some lingering numbness in two of my toes (oops) and some blisters. But I do have a budding excitement for the first officially submitted FKT on the High Sierra Camp Loop in Yosemite National Park this October.

Beyond this, I’m excited to balance rock climbing in my life again and to go on a road trip with my husband this fall. Next year, who knows? I kind of have my interest piqued by the Transrockies Run stage race, but it’s so expensive.

Read more about the Wind River High Route FKT at bivytales.com. And connect with the Sara Aranda and Emma Mure on Instagram at @heysarawwr and @emma.athena.mure.

From Frito-laced chili homemade kits, this is some of the unexpected gear that lightens renowned explorer Andrew Skurka's pack and keeps him safe and comfortable while knocking out huge miles. Read more…