Nobody parties like the Finns. That was evident during the swanky receptions that followed each of the three day-long seminars that constituted the fourth-annual Winter Cycling Congress. More importantly, nobody rides like the Finns either – at least in winter.

The globetrotting conference was held this year in Minneapolis but began in 2013 in Oulu, Finland—the self-proclaimed winter cycling capital of the world.

Of the 77 percent of residents who bike at least “sometimes” in Oulu (which includes the 22 percent who commute by bike regularly), nearly one in three persists through the eight-and-a-half months of snow and “thermal winter” (temps under -15 degrees Fahrenheit). Compare that to the paltry, if domestically respectable, rates in Minneapolis of 4 percent who commute by bike, less than half of whom brave the elements through the five or six months of Minnesota winter.

Finnish dedication to bikes is understandable; while four-barrel carbs, V-8s, and ah-ooo-gah horns fueled a post-war economic boom in 1940s America, automobiles didn’t catch on in Finland until the late ‘50s and early ‘60s. For those twenty years, while the U.S. was paving multilane roads and vivisecting interstates, the Finns relied on increasingly bike-friendly and bike-efficient streets. By the time vehicles hit the scene, a sizable chunk of the population was committed to cycling. 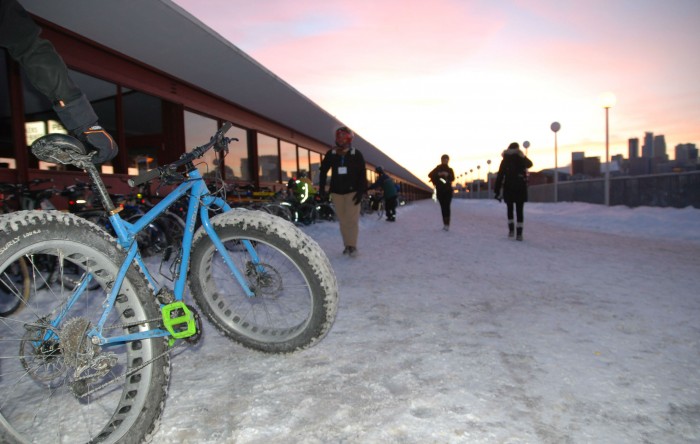 The question begs: what did they learn with those extra decades and what are they doing to maintain their robust cycling community when the weather turns foul? Here are the takeaways from the 2016 Winter Cycling Congress – what’s hurting winter cycling here and how we can fix it.

The most obvious barrier is temperature. Being cold generally sucks and pedaling a bicycle outside, exposed to the raw, frigid air, seems to many like a bummer way to get around. But ask anyone who rides in winter and they will tell you that’s simply not the case – if you’re properly outfitted. As Pekka Tahkola, Finnish-born vice-president of the Winter Cycling Federation, states:

“It’s not too cold, it’s never too cold… It’s about clothing.”

The Finn’s cryptically simple advice belies the real science of warm winter riding. “Layering is 100 percent the way to go,” said Kurt Barclay, marketing manager for 45NRTH. Using the right layers, he advises, will keep any rider dry, warm, and best of all, comfortable.

“With our products we focus on protecting your head, hands, and feet,” he added. “That’s where your body will draw from to protect your core when it’s cold.”

In short, keep your fingies and toesies cozy, because the rest of you will remain heated. And not the dry, shrink-your-eyeballs heat that blasts from the dashboard, we’re talking pure biothermal — calories, son.

This is why layering is crucial – you may be chilly when you start, but probably will be sweating by the time you’re done. Use a wicking layer against your skin – for performance you can’t beat a polyester synthetic or merino wool, then a synthetic thermal on top, and if it’s windy or there’s precipitation, cover yourself with a water-repellent shell.

Anyone who has browsed the aisles at major outdoor retailers can attest that fighting off the elements can put a very large dent in the pocket book. But it doesn’t have to. Once again, Tahkola is modest, “Just put on whatever you would put on if you went out walking.”

While you let that sink in, consider this – just about everything you would need to survive winter on a bike can be purchased from a secondhand store. 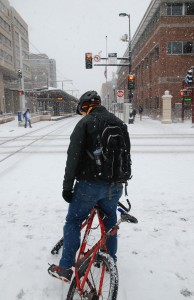 Geoffrey Kisch of Bike Walk Wichita did a little experiment for the local homeless teens’ shelter. “I went all over to different thrift stores to see if I could outfit myself for the winter on the cheap.” And it was pretty successful, “My first stop I hit the jackpot – an Icebreaker thermal top for twenty bucks.” Beanies, hats, gloves, merino wool, tights – pretty much everything but socks (turns out donating socks is like donating uneaten pizza crust -it’s too old, too chewed up, and too nasty).

Perhaps his best advice – “Shop in the women’s section. I would have a hard time finding tops and bottoms in menswear, but there is always a ton of selection on the women’s side. It’s function, not form.”

Even industry insiders have winter gear hacks. Once again, Kurt Barclay: “Thermal cycling boots are extremely effective, but can be really pricey. You could turn your own boots into cycling boots by putting some aluminum foil inside the sole to protect your foot from heat transfer to the pedal. Then put a plastic bag between a wool sock on your foot and a heavy gym sock outside and you’re waterproof.”