Home » Winter » Do It Yourself: Early-Season Ski & Snowboard Waxing

A tuned ski will give consistent performance, from blower pow to wet mashed potatoes. This is how to wax skis and snowboards for a great year.

Skis are my work ride. I ski and instruct over 100 days per year. That could put me at the beginner area at the bottom of the mountain in sun-baked snow, or on the upper mountain skiing chopped up powder with guests. Keeping my skis tuned ensures that they perform consistently no matter where I am on the mountain.

On the flip side, I’ve also been a geeked-out ski tech and worked on skis for a wide range of racers. The wax protocol I’m about to share is a balance of the best performance and the minimum amount of time spent working on skis.

What we will cover assumes that your skis were tuned and waxed before you put them to bed for the summer. In “Do It Yourself: End-of-Season Ski & Snowboard Waxing,” we covered the how-to of that process. If your skis have been sitting all summer without end-of-season love, you will want to review that article. A stone grind and edge sharpening may be in order, as will base prep wax like SWIX BP88 or BP99.

A Bit About Ski Bases: Extruded and Sintered

Extruded bases use a molten polyethylene material that is extruded through a mold. Think giant pasta maker. These bases are often used on inexpensive, and some park, skis. If this is what your ski bases are, the waxing procedure described will be of limited utility to you. A quick hit with a wipe-on wax is your process.

That leaves sintered bases. If you have good-quality skis, they most likely have sintered bases. They’re made by taking ultra-high-density polyethylene grains and applying pressure to adhere the material together. Instead of looking like a giant piece of pasta, the bulk product looks like a giant wheel and is called a bolt. The closer to the center of the wheel, the denser the sintered material is.

The material is then skived off the bolt with a blade. Those different densities are specified by ski manufacturers for different ski categories — from powder skis to FIS race skis, with race skis further segregated into temperature ranges. The densest, better-quality bases end up on higher-quality skis, and the glide characteristics of those skis are stupendous.

The net result is that sintered bases form a crystalline structure, with spaces between the crystals. Those spaces are gold when hot waxing.

Green Scotch-Brite pads: The greasy scrubby pad that you used on dishes? Not the tool for the job. Spend a couple bucks and buy a pack of green Scotch-Brites at the hardware store. Then you will be set for the year with kitchen scrubbies.

An iron: For years, I used a thrift store clothes iron. One day I broke down and spent the $50 on a waxing iron. The ease of use is worth every penny. As you go up in price, you get digital temperature gauges and thicker thermal plates — a must if you are consistently waxing with high-priced, temperature-sensitive fluorocarbons.

Clamps: I’ve seen ski school and patrol locker rooms that have all manner of sketchy tuning and waxing benches. I never use them. The job is so much easier in my home shop with dedicated ski clamps.

Wax: My two go-tos for “running wax” are SWIX’s F4 and SWIX Moly Fluor. Two of these sticks will usually get me through an entire season. A key to wax longevity is prepping your skis off-season. If your bases are dried out, they will take more running wax.

Scraper: Definitely go for a thick Plexiglas scraper from any brand. Four to five millimeters in thickness is what I look for. The stiffness of the thicker material makes the job more efficient.

A way to sharpen your scraper: You know that feeling when you’re trying to cut something with a dull blade? That’s why you sharpen a scraper. It will remove more material, more efficiently, than a dull one. I use a 90-degree edge sharpening guide and drywall screen. Any 90-degree surface and 220-grit sandpaper will also work. To ensure a flat base of operation for sharpening my scraper, I use a scrap piece of porcelain tile.

Finishing brush: World Cup tuners have a crazy array of brushes. I have just one: A version of the SWIX Rectangular Combi Brush that is a few decades old and still going strong.

A way to retract ski brakes: I’ve been using the same six pieces of accessory cord for years. I typically tune several pairs at a time. Having a way to retract the brakes on three pairs of skis is time efficient.

Ski & Board Waxing: The Process

Retract and secure your ski brakes so that they are out of the way. 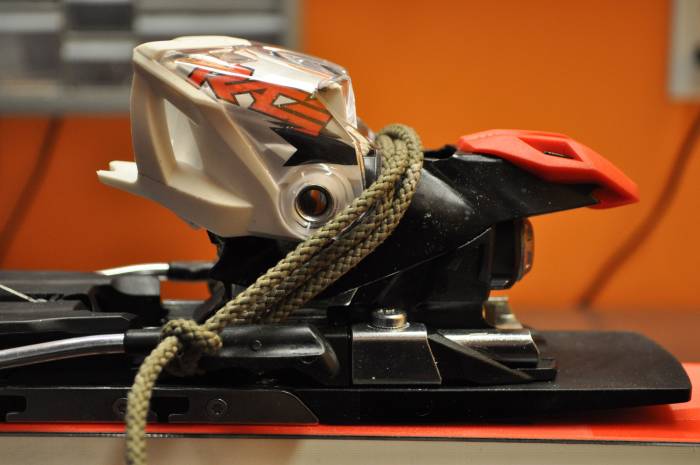 Assuming that your skis have been sitting over the summer with a layer of storage wax, you will want to scrape that wax off. Work from tip to tail. Once you think you have all of the wax up, sharpen your scraper. Scrape again. You will be amazed at what you pull up. Whenever you are working on skis — be it scraping or filing edges — always pull your tool towards you. Pushing tends to exert downward pressure and scallops your ski edges and bases. 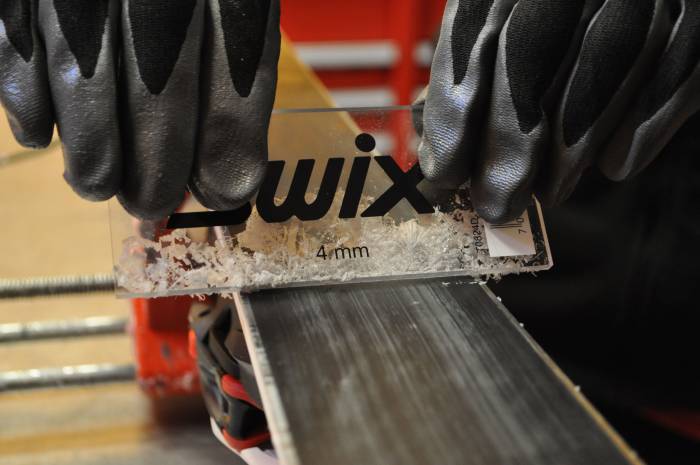 Next, crayon your running wax of choice on. You can also drip wax melted wax from your iron. This process tends to use a lot of wax. For early season, which is heavily dependent on manmade snow with impurities from snowmaking and grooming equipment, I use SWIX Moly Fluor. It does a great job of repelling dirt. As the season progresses and more natural snow is around, I switch to SWIX F4. Once spring hits and snow becomes more abrasive and laden with pollen and dust, I’m back to Moly Fluor. 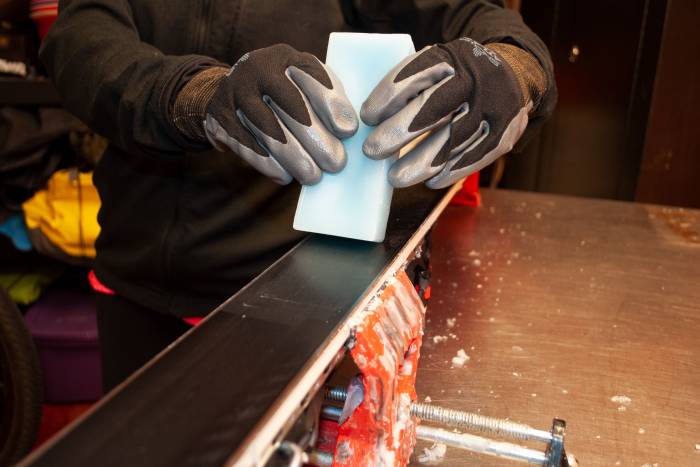 While you’re crayoning wax on is a great time to warm your iron. If you’re using a dedicated waxing iron, set the temperature as recommended by the wax manufacturer. If you are rocking the thrift store clothes iron, start low. Work your way up. If your wax smokes, the iron temperature is too high.

Now that you’ve dialed your iron’s temperature in, start to iron the wax in. You should work tip to tail. Make three passes, then scrape the hot wax off. Set your skis to cool completely. Keep the iron moving. 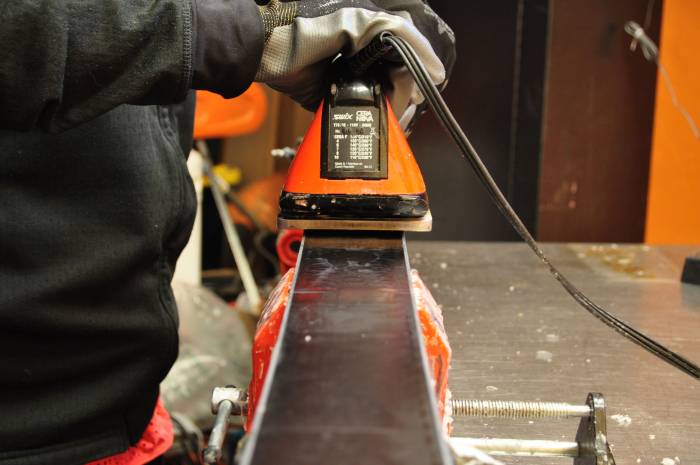 Once your skis have cooled completely, take a pass or two with a sharp scraper to pull the surface wax off.

Repeat these steps. This saturates the bases with running wax. Many consider making a total of three passes to be the best practice. If my skis are new, I may do this. Skis that have bases that are well saturated often don’t require that many passes. Regardless, more passes are better than fewer. After my final pass. And before my skis have cooled, I run the scraper along the edges to remove the warm, soft wax before it hardens.

9) Brush Them to Perfection

After the final scraping, use your finishing brush to remove the final, thin layer of wax from the skis bases. Does it feel like the brush is getting bogged down? Is your brush picking up a lot of wax? You didn’t scrape thoroughly enough. Sharpen your scraper again and take a few passes with it.

How Often Should I Wax Skis?

How often should you do this? On my dedicated race skis, I do it after every ski session. For work skis, I have two identical pairs of Stockli Laser AX Skis. I use each pair for five days, then rotate in a fresh pair. I do find, however, that the bases get worked after five days of bell-to-bell use. Optimally, I’d go three days before waxing.

Is this exercise worth it? Only you can make that return-on-investment judgment. Here’s what I find: My skis perform consistently regardless of snow moisture content. And when the wet, sticky snow of spring hits, if I’ve been diligent about waxing throughout the year, my skis perform as efficiently as ever.

Like Warren Miller ski movies or the giddy feeling on the morning of a powder day, ski tuning is as much a part of skiing for me as the reassuring feeling of clicking into my bindings. It is a ritual. But it’s also an important part of gleaning the best possible performance from your skis and the most enjoyment while on the mountain.

Up Next: See It, Believe It: 55% Off Last-Season Smith Goggles