“Natural Mystic” sounds less like a ski film title and more like a chakra experience, but you’ll understand once you watch it.

The project was filmed entirely by drone in the Aiguilles Rouges of Chamonix, France. And, as the description accurately notes, there are no “gimmicks or tricks, and no music.”

Listen to the full, immersive sound of skis carving against crust, a yelp of excitement, and the occasional gust of wind.

Sam Favret acted as both the filmmaker and skier on this project, while Maxime Moulin directed the drone-only endeavor. Their attention to detail and obvious love for the mountains are what make this the coolest 3-minute clip of drone footage we’ve seen in a while. 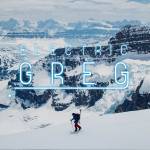 Follow Greg Hill in 'Electric Greg' as he attempts to summit 100 peaks using only human power and electricity for transportation. Read more…