Upstate East Coasters are reputed to be tough skiers. And after watching this film about skiing on ice in the Adirondacks, we understand why.

Deep in the backcountry of the Adirondacks in New York, skiers Ben Michaels and Alex Goff brave some of the most extreme skiing the Adirondacks could have offered — and not exactly the fun kind of extreme. More ice than snow, the pair don layers to battle gusty winds and ski some of the best ice out there.

After skiing in icy conditions, the two team up later with fellow skier Myles Barrett as they head to the top of Algonquin, the second-highest peak in the Adirondacks, at 5,114 feet. This time, Mother Nature throws them a bone as they hit the slopes down Algonquin, having a great time and enjoying more snow than ice.

Stay tuned for more films from Promised Land: Season 3, Ski the East’s 16th annual production, which will take us all on wild rides through some of the East Coast’s more epic skiing. 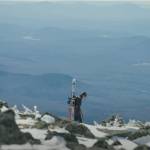 Ski the East's 'Promised Land 3.5': Skiing 'The Big One' in New Hampshire

Skiing East Coast's "The Big One" doesn't get any better or any worse. You'll have to see it to believe it. Read more…