What’s the difference between showing off and trying to show off? When you’re showing off, you stick the landing. Watch Matchstick Productions’ skiers try, in this mashup of epic crashes.

Biffs, beefs, yard sales, tomahawks, butt busters, smashes, ski crashes, and collisions. They’re an unfortunate and inextricable part of skiing. And for every shot in a ski film, where someone lands a perfect trick, there’s at least two more shots where they eat it.

That’s why Matchstick Productions made this inspirational little edit. Why let all those rad bloopers go to waste?

They didn’t. They put together a short video composed of all of the best ski crashes from the making of Anywhere From Here, the company’s latest ski film. Not only is it fun to watch (especially since no athletes were harmed in the making of this film), but also because it’s good inspiration. It shows us how the pros became pros — by getting up after they fall, and trying again, until they get it. 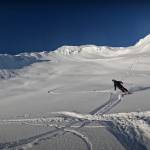 Weazy Davis pulled out all the stops and sent a huge double-flat spin off of a 70-foot cliff — without planning it.  Read more…