Three of the biggest skiers with TGR discuss mentorship and avalanche safety as they venture into the backcountry on a tour that gets cut short.

When we’re watching athletes like Kai Jones, Tim Durtschi, and Sage Cattabriga-Alosa send it in Teton Gravity Research (TGR) ski movies, it’s easy to overlook how much planning, safety, and mentorship go into each and every shot.

Not only does TGR have a team of people planning every trip meticulously around avalanche danger, but the TGR athletes are also constantly thinking about it themselves. After all, they’re the ones risking everything.

This is a large part of why these TGR athletes mentor one another. It’s not an official thing, but one that happens naturally as they spend time together. They learn from one another, they watch each other, and they exchange knowledge on every run they take together. It shapes their careers.

And it also helps them keep each other safe.

Sometimes that means skipping out on the powder. In this short video, Jones, Durtschi, and Cattabriga-Alosa take a tour on a very snowy day. They’d hoped to make some big runs and get some rad footy for TGR. But when they dug a snow pit and started testing the layers, the plans changed. It was too dangerous, they all agreed, and turned back, headed for the car.

“Sometimes that’s the way the cookie crumbles,” said Jones as they returned to the parking lot.

For more from the TGR Safety Week, check out the production company’s YouTube channel. 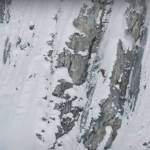 What’s a wallride? Well, as long as you know what a wall is, you’re well on your way to grasping the concept. Read more…