What do you do when you’re out filming a ski movie and can’t find good snow? As Lucas Wachs says, you just keep ‘whispering to the powder.’

Conditions don’t always cooperate when it’s time for your big ski trip. That’s a fact of life for skiers and riders and one that we’ve got to roll with.

Such was the case for Lucas Wachs and Sam Cohen in their new edit supported by 10 Barrel. The skiers ventured up to Bill Putnam Hut in British Columbia to shred an area known as “Fairy Meadow.” But when they started skiing, they quickly realized the snow was crap.

So what did Wachs and Cohen do? They did the only thing they could: They kept looking. And they kept looking. On and on they searched, until, finally, they found the secret stashes. And then, the gnar commenced to be shredded.

In Fairly Mellow, the two skiers launch off huge cliffs, blast through fields of powder pillows, and pop from one shoulder-deep turn into the next. They stomp some of the landings. They barely stick others. And then, a few times, they eat snow and crash.

Fairly Mellow is Wachs’ latest edit, shot and edited by Peter Wojnar. Presented by 10 Barrel and supported by Dakine, it’s an entertaining ski short about finding the perfect powder. 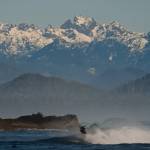 'Anywhere From Here': Skiing and Surfing on Vancouver Island

British Columbia's Vancouver Island has everything, from skiing the slopes to surfing the waves. Read more…