In November, Tom Ritsch hosted a big air event at a secret location in the Alps, that’s so remote, machines couldn’t be brought in. Meaning, the massive jump had to be built by hand.

Who is Tom Ritsch? Ask different people and you’ll get different answers — but they’re all similar.

“Tom is an awesome guy.”

“Just such a lovely person.”

“He’s one of the nicest people I’ve ever met.”

Ritsch is also a badass professional freestyle skier, on top of being widely admired for his likability. Volkl, Dalbello, and Marker all sponsor him. And he’s the founder of the Ritsch’s Roll Backcountry Invitational freestyle skiing big air competition.

This year, Ritsch hosted the event in partnership with Legs of Steel (LOS) Skiing. The location is deep in the remote Alps, at 2,300 m, near his home in Kitzsteinhorn, Austria. Bringing in machinery to build the jump was impossible because the spot is so far out. So they built the massive mound of snow entirely by hand.

“I’m super excited to have all these guys come to my home mountain of Kitzsteinhorn and finally have an event at the roll!” said Ritsch. “It’s not the first time we’ve hit the jump. So we’re all familiar with the spot. And I know [also] we can make the jump just as good as before.”

All that’s to say, this jump is huge, launching athletes (including Ritsch) like they were fired out of a cannon. The competition ran in a jam session style, with three rounds. The athletes’ best two tricks were judged by a new system LOS has been developing for over 2 years. According to LOS, the judging system delivers “indisputable results.”

Watch the full video of the live-streamed competition. Or skip straight to the action: Round I starts at 10:50, Round II starts at 22:16, and Round III starts at 40:50. 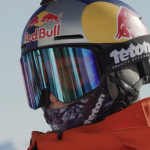