Over many years, skiers testing the Scarpa Maestrale found it a worthy backcountry ski boot. For 2017-18, it gets a whole lot better.

When a product as renowned as the Scarpa Maestrale gets a complete makeover, I take notice. This is among the top-selling backcountry ski boots of all time, and for 2017, it is entirely new.

I put a late pre-production model of the Scarpa 2017 Maestrale RS ($795) to the test over several days in the Rocky Mountains in Colorado and the Alps in Italy and Switzerland.

For the uninitiated, the Maestrale RS is an alpine touring (AT) boot. The upper cuff cants forward and back freely, allowing skiers to go uphill as well as down. It has a rockered Vibram outsole like a mountaineering boot.

I skied a range of deep, soft powder to very hard windslab on pucker-inducing 45-degree slopes. To check uphill performance, I climbed thousands of feet in the backcountry, boot-packed, and descended inbounds lines on both tech and alpine-style bindings.

The short verdict? These boots kick butt. Read on for more details. 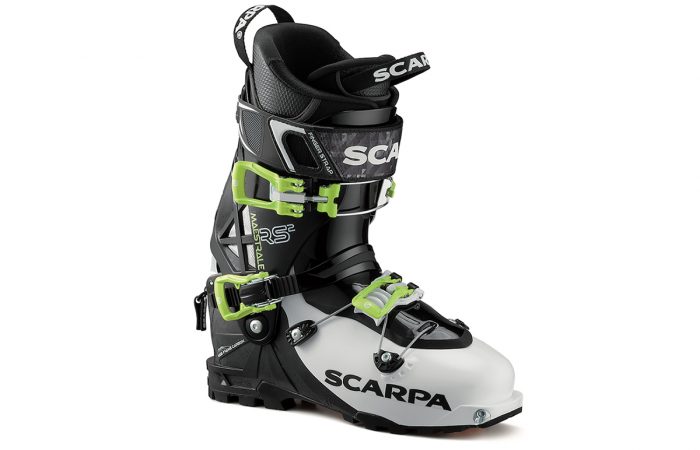 The 2017 Maestrale RS departs from its predecessor in many ways. Most obviously, instead of four buckles, the new model has just three buckles and a power strap. It adds an equalized cable system over the forefoot that helps the single buckle there support a large area where the lowest buckle is removed.

This redesign shaves 5 ounces off the previous model, bringing each boot down to a scant 3 lbs. 3.7 oz for my size 28.

Salomon spent three years developing these boots with input from expert skiers like Greg Hill. We put them to the test for this review. Read more…

Next, the lock mechanism used to switch from climbing to skiing is now a simple external bar that locks into a pin for downhill skiing or flips up for low-friction touring. It’s simple, foolproof, and allows for quick transitions.

The new carbon-reinforced shell is 5 ounces lighter, (the boot weighs 3 pounds, 2 ounces, size 27) and allows for more ankle mobility when touring (from 37º in the old model to 60º in the new one). This means a much more comfortable walk mode.

It uses an Intuition thermo-moldable liner, which is currently the gold standard in ski-boot liners. I immediately took them to Wilderness Exchange in Denver, where a boot-fitter molded them to my foot.

The difference between these two models for 2017-18 is almost entirely boot stiffness. Scarpa claims the Maestrale at a stiffness of 110. The Maestrale RS is a 130 flex boot.

Beyond that, most specs are nearly identical. The RS model weighs a mere 0.3 ounces less than the Maestrale. They both have a 60º range of motion. The buckle configuration is the same.

The women’s model of this boot, the Gea, is very similar to the men’s. The main difference is a wider opening at the top to accommodate the lower calf muscle in most women.

The Gea and Gea RS have very similar stiffness as the men’s models. We have not yet tested the women’s boot.

I expect the SCARPA Maestrale RS to take a spot at the pinnacle of backcountry touring boots in 2018. There it will compete with the Salomon MTN Lab, also a powerful but light downhill-oriented touring boot.

The advantages of the Maestrale RS are stiffness (130 flex vs. 110 for the Salomon) and ankle articulation (60º vs. 47º for the Salmon). The weight difference is negligible, with both boots weighing in right around 3.5 pounds.

Dynafit makes a few boots that could stack up with these as well, including the Dynafit Beast Carbon, which is a tad lighter, stiff at 120 flex, and has 45º ankle rotation. I’ve not tested this boot.

Ultimately, get to a boot-fitter and try a couple of these models on to see what best fits your foot, as comfort should be a high-ranking factor when choosing a boot.

This is a great boot. In several days of touring, I’ve yet to come up with a complaint.

It’s stiff (the brand claims 130 stiffness) and powers big skis in tough terrain with no problem. This boot (and the competing MTN Lab from Salomon) redefine the touring ski boot. For many skiers, a single pair of boots like these can serve inbounds and backcountry purposes.

Indeed, I used it to push a pair of Faction Prime 3.0 as hard as I dared while riding both inbounds and steep off-piste terrain in Verbier. Back in Colorado, I also powered much heavier RMU Apostles with Salomon Guardian bindings, and next year’s G3 SENDr skis with tech bindings. In all three situations, the boots gave a firm, confident connection to the ski.

It’s worth noting that I weigh about 150 pounds and am an expert skier. Heavier skiers would put the stiffness of these through a more rigorous test. But compared with other boots, these seem stiff with good, progressively stronger flex. I expect even heavier skiers will be pleased.

The extended range of ankle mobility proved excellent. I did several long tours, and found that the boot barely limited my stride. I even walked around town in them for a few hours, up and down to hotels, and never really minded them even on half-mile strolls along concrete or dancing at a slope-side concert.

The rockered Vibram outsole is rugged and grippy. I never slipped with these, and felt comfortable climbing down a long stairway and vertical ladder onto the Toula glacier, a unique experience indeed.

At 3 lbs. 3.7 oz for my size 28 boot, these feel really light on the foot. For touring uphill, they are fine for all-day use. They certainly aren’t a ski-mo race boot, nor are they intended to be. But for a boot that can drive pretty much any ski, they are shockingly light.

These are easy with the Maestrale RS. Flip the lever up to tour, down to ski. The only negative here is that the small slot where the bar adjoins a pin to lock the boot can get filled with ice or snow. A couple of whacks of a ski pole fixed that in an instant though, so it’s only a minor nuisance.

Bootpacking up steep snow and rock was fine. There are better boots for boot-only climbing (the Arc’teryx Procline, for example), but that boot is more aimed at the alpine climber than the downhill skier.

The new 2018 Maestrale RS is among the best ski boots I’ve used. It is remarkably comfortable uphill, and powers even big skis through tough conditions.

It appears well made, and should be durable enough for serious skiers who get out a lot. I’ll update about durability after more use, but after about a week on these boots they show little sign of wear.

I expect this to be a popular boot when it hits the market in fall 2017.