The Verse lets you change how stiff the boot feels and uses The North Face’s breathable FlashDry tech, a first in snowboard boots. 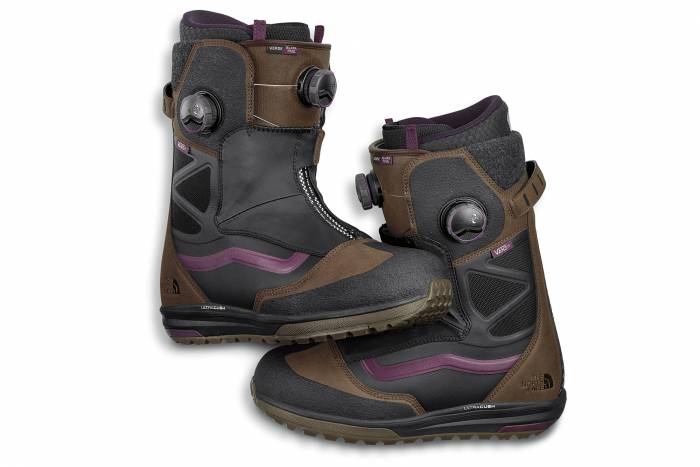 The scales tipped past 40 degrees Fahrenheit on a January day during Colorado’s abnormally warm and dry winter. One-way vents at the bottom of my foot expelled heat from the slushy, sweaty day at Copper Mountain.

I rode the Vans Verse, $390, for a day of inbounds snowboarding during this year’s SIA on-snow demo. To be frank, this boot is meant for backcountry, not inbounds riding. But it was my chance to test it, and it performed as marketed in my limited time.

This is the second iteration of the Verse Snowboard Boot for the upcoming 2018/2019 winter season. It stands out with tongue stiffeners, a removable heel stiffener, and a Boa System that helps it fit really well. It also addresses moisture management with a host of unique technologies.

The biggest update for this year? The North Face exclusive breathable Flash Dry Liner. In a minimal first look, we break down this full-featured boot.

In testing, the boots offered a responsive ride with impressive temperature regulation. And the number of fit adjustments I could make on the fly was striking.

The double Boa closure system allowed me to lock my heel into the boot and efficiently transition in turns. And the zipper shroud let me strap in unencumbered. I didn’t feel my foot slide around in the boot from sweat despite how hot the riding conditions were.

I imagine the boots would take a week or so to break in, as they felt rigid on the first ride.

The technology within the Verse is best suited for backcountry snowboarding. Removable inserts, breathable liner, and waterproof zipper shroud are all intended to make a day of touring more comfortable.

Much of what goes into the Verse is proprietary Vans technology. Expect some unfamiliar names.

Vans designed the liner with hydrophobic FlashDry fabric to push moisture out and prevent wetting out. Having used TNF FlashDry in shirts for years, I can attest to its breathable properties.

Adding to breathability are one-way vents on the bottom of the boots. These waterproof valves send moisture and heat out without letting the elements in.

Vans builds the Verse with removable inserts and molds in order to impact how stiff or conforming the boot is. Two Boa closures, one on the forefoot and the other above the ankle, twist down to tighten.

First introduced in 2012, high-rebound Hytrel inserts fit into the top of the tongue and extend down to the top of the foot. Remove them for a day skinning for a more flexible boot while touring. Then before dropping in, you can pop the inserts back in to jazz up stiffness and responsiveness.

On the back of the ankle is a removable X-cage for enhanced heel hold within the boot. Vans representatives said that some riders will take this feature out with new boots, then pop it back in once they’re broken in and have lost some stiffness.

The bottom of the Verse combines aggressive lugs and dampening performance.

The brand calls this the “Ultimate Waffle.” According to Vans, it works on anything “from stomping a big landing to side-hilling a hike (and even traction on your sled).”

While a lot of the tech on this boot was introduced in earlier models, the updates are noteworthy. And new visuals are in order for next season thanks to Vans team rider Blake Paul.

For backcountry snowboarders looking for good breathability and versatility, the Vans Verse is worth investigating.