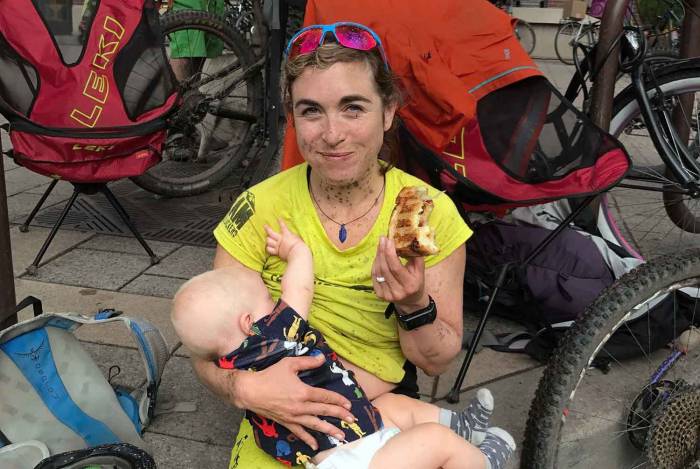 Looking for a little dose of inspiration to get outside and crush it? Well, today’s your lucky day. Here you’ll find five adventure women going big, setting records, and inspiring the next generation. And in between dominating on the rock, trail, or mountain, they can be found holding down full-time jobs, volunteering, and taking care of kiddos.

Because there’s no reason women can’t have it all. And adventurous women know that means getting plenty of time outdoors.

In 2014 Libby Sauter, along with climbing partner Maya Smith-Gobat, set the women’s speed record climbing The Nose on El Capitan. And in 2016, she followed that up by making history for being the youngest person (and one of only five women) ever inducted into the American Alpine Club’s Hall of Mountaineering.

On top of all that, Sauter works as a pediatric cardiac surgery nurse bringing care to underserved populations in Libya, Iraq, and Nepal.

If jaw-dropping underwater adventure is what you’re after, Kimi Werner has it. Having grown up in Hawaii diving and spearfishing with her father, she developed a passion for the ocean and has created a life around diving and sustainability.

When not in the water hunting for food, she can be found on land expertly preparing fresh meals.

This mama is no stranger to adversity. As a pro adventure racer and mountain biker, Chelsey Magness regularly spends days on end racing in some of the toughest places on earth. And she has no plans to let motherhood change her competitive schedule.

Just months after giving birth, she competed in the grueling Telluride 100 MTB race. (Read more about the photo finish here.)

In 2010, Christy Mahon stood atop the 14,130-foot Capitol Peak in Colorado and became the first woman to successfully ski every 14er in the state. Since then, she’s made it a goal to hit the 100 highest peaks in the state.

Even more impressive, she spends time every winter mentoring local kids on the mountain and working to bring environmental awareness to the next generation.

An all-around adventurer, Angela Vanwiemeersch has a special affinity for ice climbing. She holds the record for first female ascent on Lake Superior’s HMR route and has led several other first ascents in the Upper Peninsula.

And when the ice melts, she’s just as comfortable climbing rock or traveling the world in search of adventure and learning.

The most amazing thing is, this list barely scratches the surface. From epic BASE jumpers like Steph Davis, to impressive racers and authors like Rebecca Rusch, to the everyday weekend warriors hitting the trail, there are countless women crushing competitions, records, and life.

So here’s to all the badass adventure women out there. May we know them, raise them, and aspire to be them.

And to round it out, we’ll leave you with this:

Saving…
Power of She: REI Partners With Women’s Fitness Brand Athleta
Fishing Needs More Women: This Is Why
×