Replacing the brand’s old guard, the Yeti SB165 is a 27.5 wheel bike that will make you feel like a kid again.

If you’re on the spectrum between gravity-committed and gravity-curious, Yeti’s new SB165 might just be the most fun you can have on two wheels.

In short: We tested the Yeti SB165 on two continents through a variety of trails and environments — monster climbs, bomber descents, singletrack, rocks, roots, mud, and more. The SB165 knocked our socks off. The bike scampered over rock gardens like they didn’t exist and stepped down chunky rocks with the same finesse that it swooped through tight corners, tail whipped, and launched and landed off anything we could find. We took A-lines we’d previously passed up and nailed every single one. 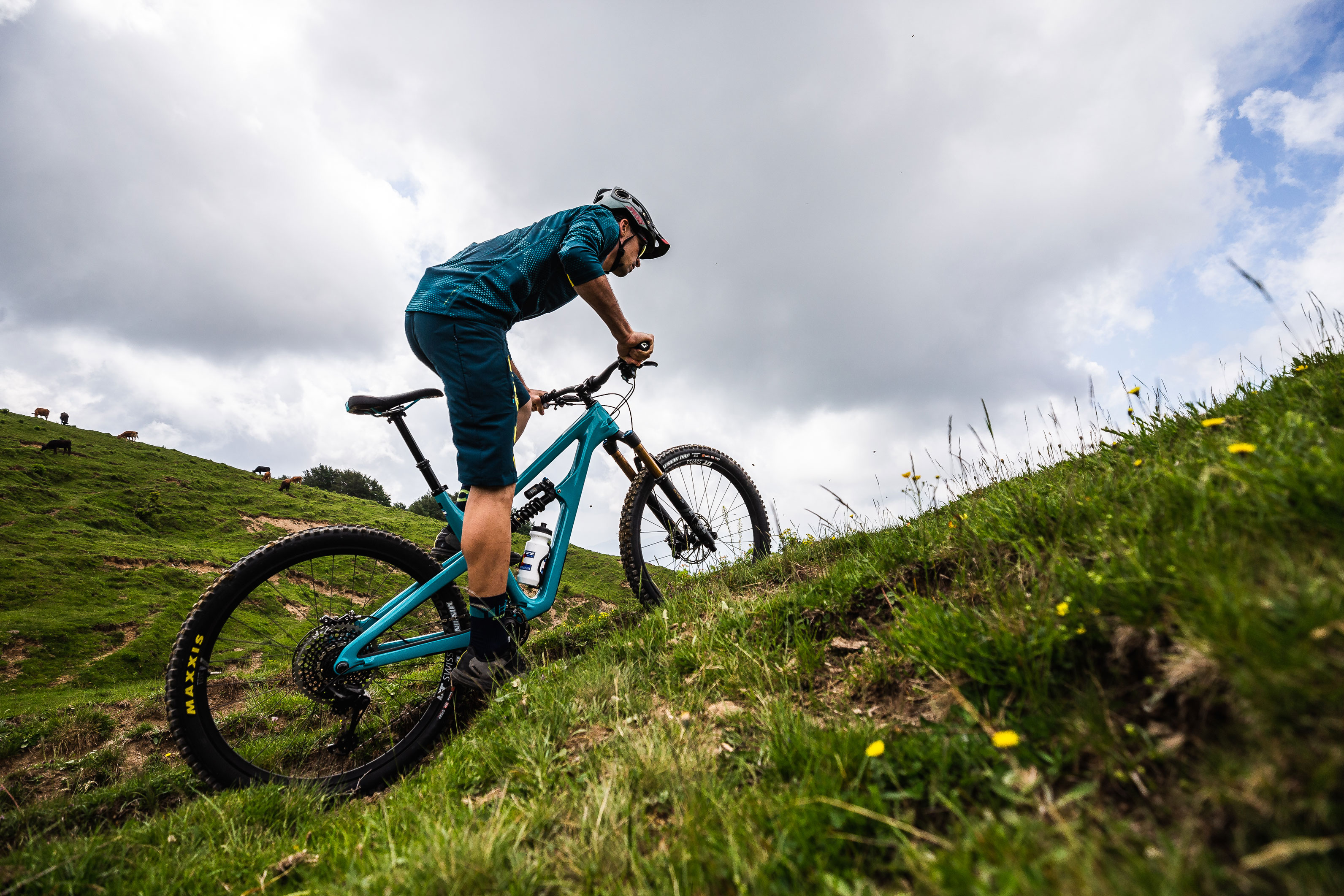 We tested the SB165 in Bovec, Slovenia, on a 3-hour climb up jeep track and single track to a mountain hut. We continued the test with an hour-long descent though rock rubble, steep-sloped off-camber root lattices, and rutted, switchbacking mountain meadow.

Back home in Vermont, our testing continued. A wet spring gave us the opportunity to test this bike on mossy, slick rock fins and mud, through networks that require your biggest bike (suffering on the climb), on a 4-hour adventure ride (really meant for an XC bike), and throughout the local web of cross-country and enduro trails.

We’ve been mostly riding long-travel 29er bikes for the past year and loving them. When Yeti told us what it was launching, we were skeptical and found it hard to imagine going back to a 27.5” wheel bike after experiencing the speed and smoothness of the SB130 and SB150. 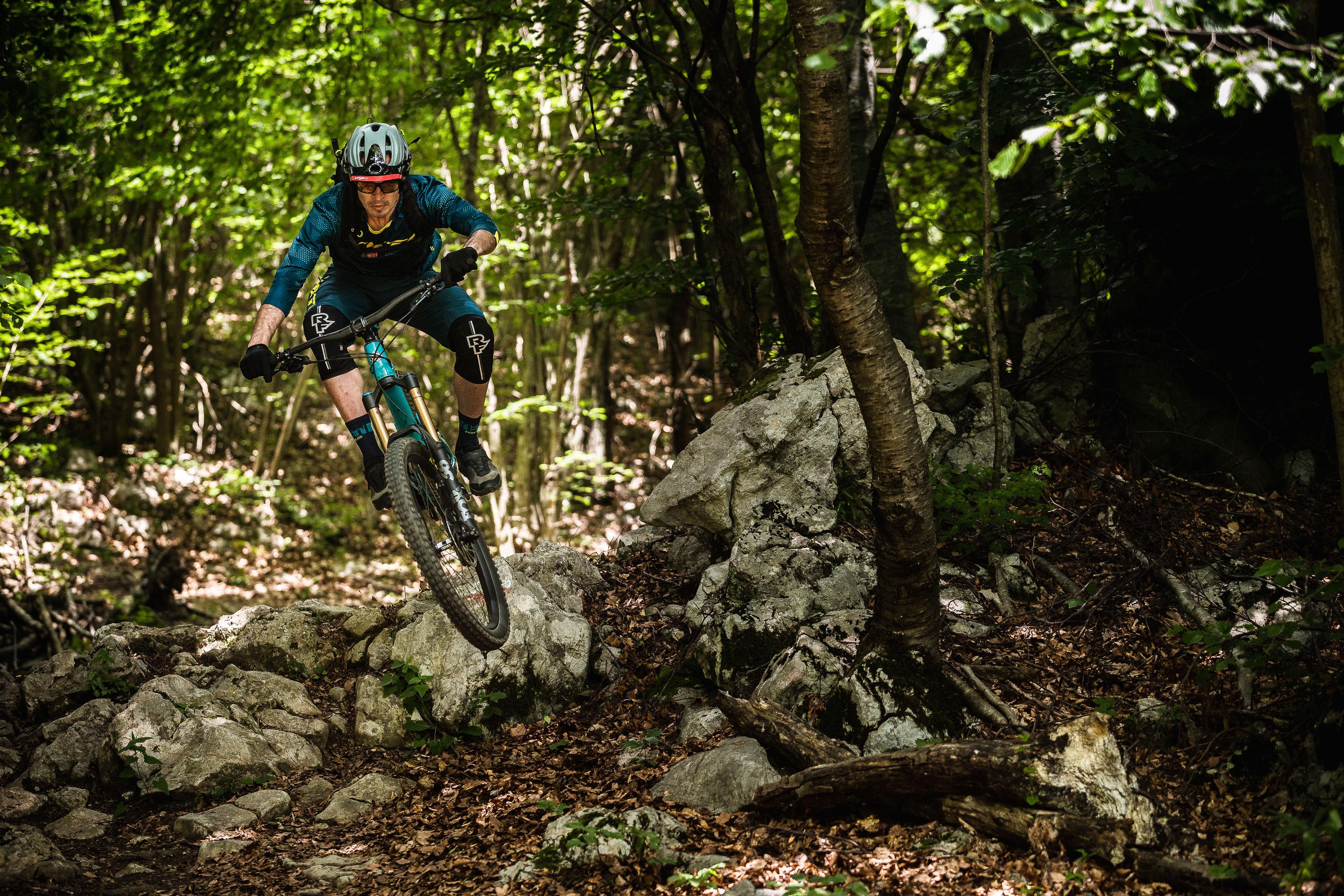 Sure, on a slow pedal through a massive root mat, we got hung up on the smaller wheels where a 29er moving at the same speed would have rolled through. However, that was a downside quickly corrected by slightly modifying our rider style — not being lazy.

And when boa constrictor roots rattled us on a descent in Slovenia, we slightly tweaked Yeti’s recommended shock settings, which at the time were still being refined, and it made mid-sized trail features as smooth as the rest of the ride.

As far as climbs go, we were pleasantly surprised. Yeah, we locked out the shock on a road climb just to see what if felt like, but we ascended mile after mile on the SB165 with the shock fully open and never bobbed or felt like we were burning energy. 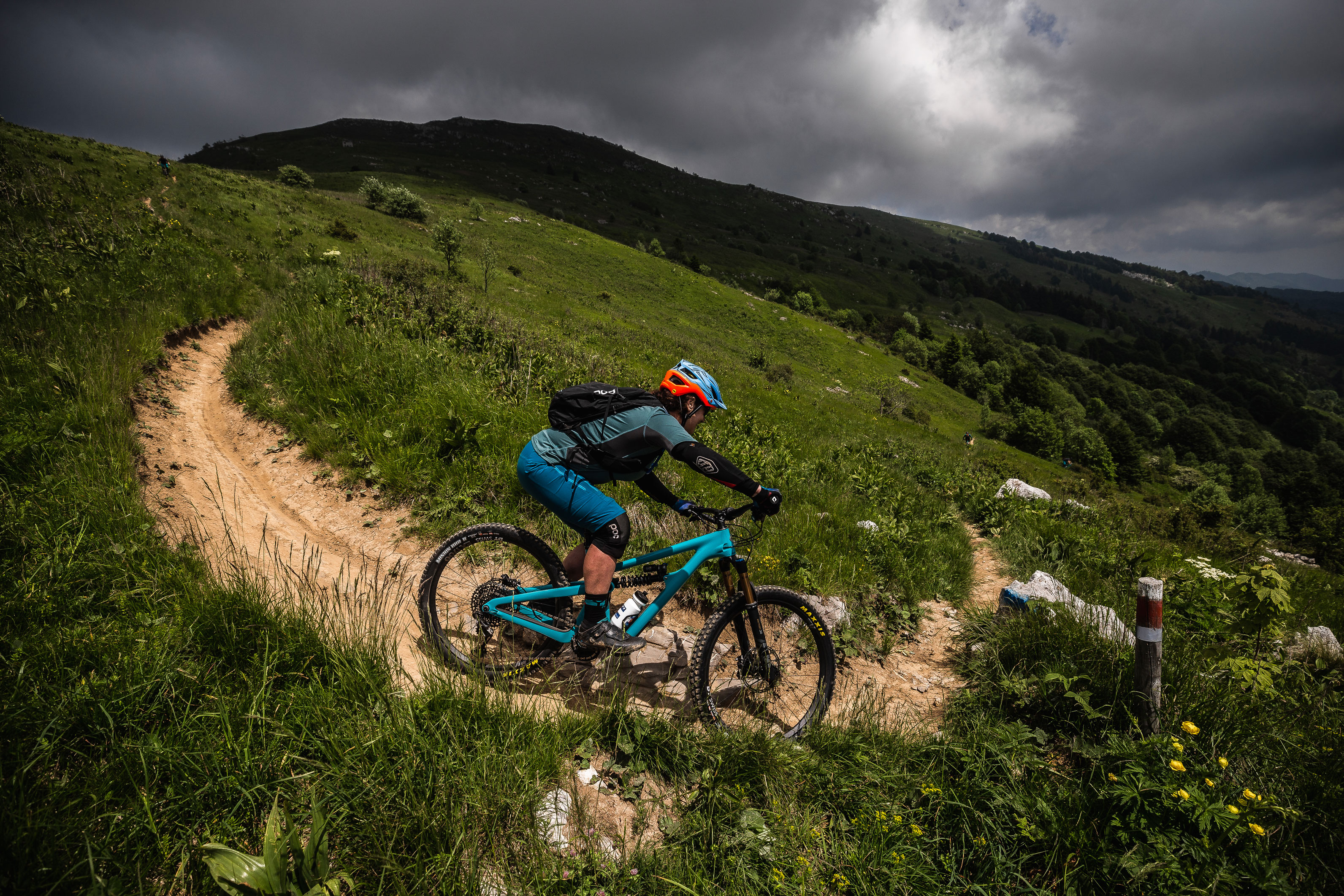 As noted, we found this bike both nimble and smooth. If you like to style your ride, hop off little hits, and whip your bike through tight turns and features, the SB165 is the bike is for you. And if you feel like 29ers are a little slow to get going, and a little less playful than you are, then swipe right on the SB165 and prepare for a real relationship — not just a one night stand.

Yeti president Chris Conroy said this bike’s personality isn’t just its wheel size. With the launch of the brand’s first 27.5 bike in a while, Yeti changed its thinking. Instead of wheel size being the great divider, Yeti puts each of its bikes in the “rip” or “race” category.

The SB165 sits firmly in the rip category, but that doesn’t mean riders won’t also race this playful bike. This bike’s DNA is all about descending. It’s tested to DH standards, and it can take a double-crown fork if you want to set it up for bike park only.

We’ll be surprised if we don’t see Ritchie Rude riding a 165 in Whistler, though Yeti lets its team ride whatever bikes they choose in a race. 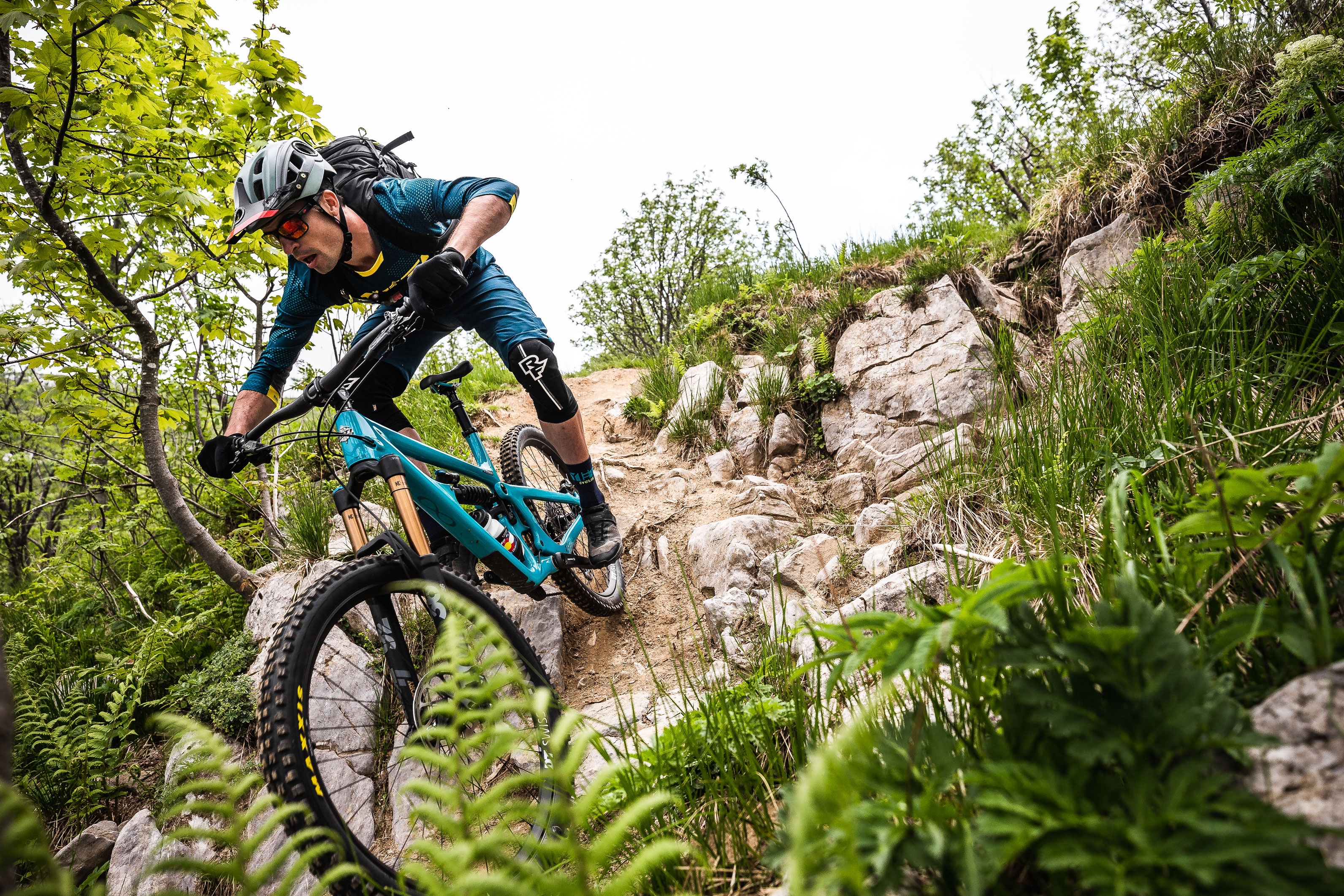 “Everything we learned on the 29ers we put into this 27.5,” said Conroy. “Progressive geometry, slacker headtube, longer front center. It handles quick and doesn’t plow.”

Also, if you haven’t ridden a coil shock bike before, prepare for a life-altering experience. And prepare to know your rider weight before you demo or buy. Yeti specs steel spring shocks on the SB165, except on the frame only and T3 (XX1 build) bikes. Those carry an upgraded coil that costs $100 more and weighs 130g less.

The steel shock comes in 50-pound increments, and the upgraded shock comes in 25-pound increments. Yeti went with the affordable shock so that it would be a no-brainer for shops to stock extras and do a free swap. If you don’t have the right shock for your rider weight (your bodyweight plus whatever you’re carrying), you will pedal strike and bob. 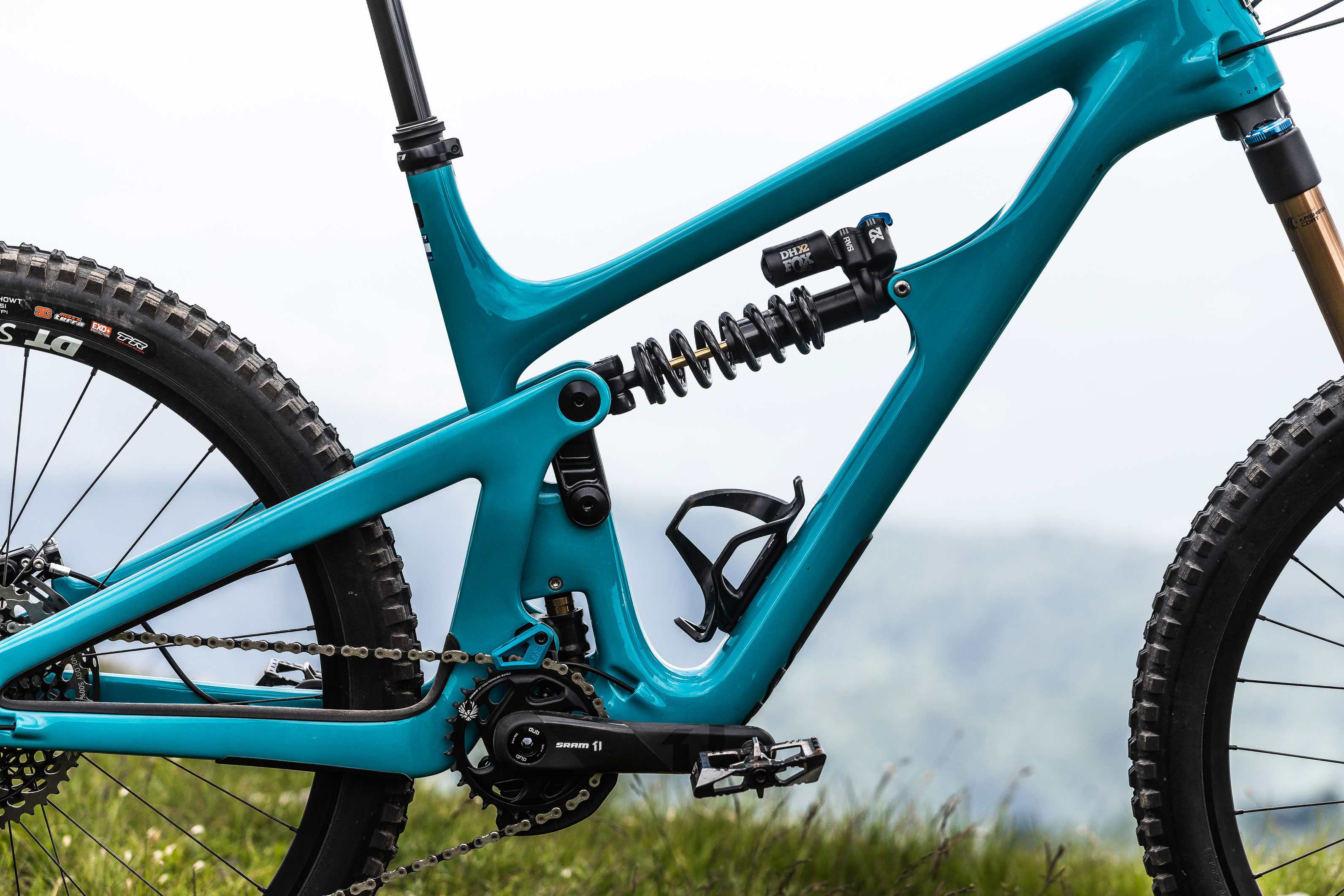 If you’re curious how the SB165 compares to the SB6 (size medium), the seat tube length on the SB165 is the same as the SB150, and 34.5mm shorter than the SB6. This makes every size bike able to accommodate more riders and give more clearance.

The SB165 headtube angle is 1.5-degrees slacker, too. This, combined with a bottom bracket that’s 5mm lower than the SB6, makes this bike insanely stable.

Meanwhile, the seat tube angle is 4-degrees steeper, which helps the SB165 climb so well. Shockingly, the SB165s wheelbase is even longer than the SB6 wheelbase, 1230.2mm on the SB165 vs. 1186.2mm on the SB6. But the SB165 works seamlessly as a unit that moves with your body. And the faster you ride, the better it performs.

Sadly, for smallest riders, this bike will not come in XS due to a tire width issue, though the small will fit riders down to 5’1”.

Yeti offers five builds: Three Turq, its premium carbon construction, two Carbon, its lower-cost carbon construction, and a frame-only Turq option. Bigger sizes have longer droppers, now with a Race Face lever, and cranks have been standardized across Yeti models to 170mm — except on the largest size SB100s.

The rear triangle on all SB165s will be the same, whether it’s a Turq or Carbon build. Yeti’s new universal rear triangle is nicer than Carbon builds of the past, but not quite as nice as previous Turq builds.

The shock settings for the SB165 are a bit complicated, so with the launch of the SB165, Yeti upgraded its shock calculator. Select your kit, your bike’s spec, and the calculator will give you settings specific to your weight and that setup.

Best of all, every 2019 model year and later Yeti bikes now come with a lifetime warranty for the original owner. If you crash your bike and break it, Yeti has a crash replacement program to help you get back out on the trail.

Up Next: A Route for Every Stage: Pearl Izumi Launches Special Tour de France Rides Across US