Patagonia presented its original Nano-Air line as an ‘insulation breakthrough’ back in 2014. This year, the company ships a more breathable version of its ‘active insulation’ top. 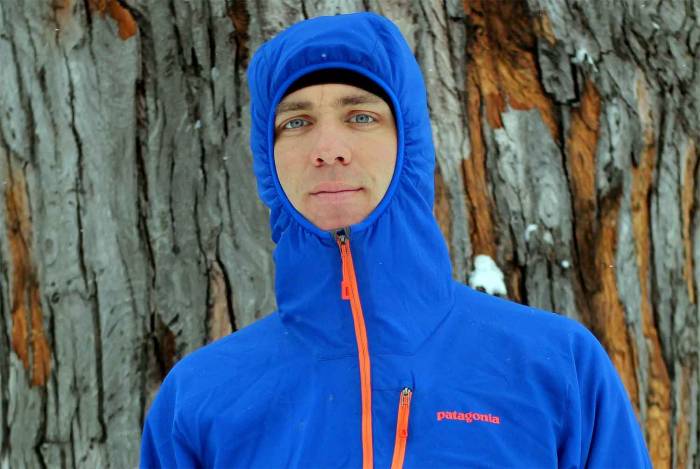 Wind cuts right through the Nano-Air Light Hoody. But it’s made to work that way, a soft outer fabric with permeable insulation inside.

The design allows a body to breathe, quickly drying to expel moisture during exertion. But when you stop moving and get out of the wind, or add a shell jacket over it, the Nano-Air Light traps copious heat.

Patagonia calls the half-zip jacket an “extended-range mid-layer.” It’s made to be worn alone over a base layer, or as a mid-layer under a shell as part of a winter kit.

As of a couple years, it’s a new category of jacket, often called “active insulated.” Though not a niche Patagonia invented, the company has embraced the breathable-but-warm genre with a fervor.

Super breathable, warm and quick drying, the Patagonia Nano-Air is one of the best all-around insulating jackets we have reviewed. Read more…

The company touts the Nano-Air Light as having a “breathable warmth” quality, meaning it can keep you warm when stationary but will mitigate sweat and body heat if you’re going aerobic on the snow.

It is marketed to the “highest-exertion mountain athletes.” But I found even normal winter-lovers like myself benefit by suiting up in the air-permeable top.

I tested it out through a range of temps for this review. Overall, the Patagonia Nano-Air Light Hoody ($249) and its accompanying Nano-Air Light Pants ($149) work well for winter days where you’re on the move.

The hoody is less warm than its predecessor, the lauded Nano-Air Hoody. (GearJunkie gave it a ‘Top Gear’ Of The Year nod two years ago.)

The 2016 model adds the word “Light” to its name and cuts back the dose of polyester insulation inside. The result, Patagonia cites, is a jacket that is 75% more breathable and 33% less insulating than the first Nano-Air Hoody.

In my use, the new Nano-Air Light was undeniably more breathable than similar mid-weight jackets I own. If I was moving hard, the hoody worked with a single base layer underneath in temps down to about 15 degrees.

The jacket is comfortable from its soft wrist cuffs to its ensconcing hood. The feel of the fabric, which has a little stretch, is reminiscent more of a sweatshirt than a technical outerwear piece.

The design is minimal. There’s only one pocket, a zip-up on the chest. When gloveless on above-freezing days, I often wished there was a place to put my hands.

Its hood fit my head nicely. However, it has no adjustments. Try it on to see how your noggin jibes. It fits under or over a helmet, depending on the hard-hat size.

The pull-over design is not my favorite. It’s harder to take off and put on. But the half-length zipper is nice once you’re moving — with no hand pockets and no zipper to the waist backpacks and climbing harnesses are not encumbered.

On the pants, a simple drawstring is used for a belt. There’s a zipper fly but little else, including only minimal articulation, no pockets, and light elasticized ankle cuffs that cause almost zero inference with a boot.

Though light weight — the hoody is about 11 ounces, the pants, 9.7 ounces (in a men’s size large) — the insulated pieces don’t pack up super small like wind-shell styles.

Put the Nano pants and top on and leave them there; these are all-day pieces. I’d sleep in them, too, as the materials are all soft, quiet, and would add nice warmth in a sleeping bag.

Where Not To Wear

If you’re standing around, look elsewhere. This jacket is not a replacement for your (much less breathable) down puffy coat. The Patagonia pieces require a shell jacket in bad weather, as discussed more below.

A sweater-like piece, the hoody top was made for skinning in the backcountry, ice climbing (but not on dripping falls), and for general high-output sports on sub-freezing days.

However, in all but the coldest temps this getup is too warm for all-out aerobic pursuits like skate-skiing and running on snow; for those activities, there are better options that are also cut and articulated for the sports.

Further, this is a bad choice for downhill skiing and snowboarding, as well as most winter biking, where constant wind from movement and the pull of gravity make the hoody and pants too cold. It will work in these situations as a mid-layer though, under a shell jacket.

Not The Only Player

As noted, Patagonia is hardly the only brand in this niche. Look at jackets with Polartec Alpha insulation, for one.

Outdoor Research, Marmot, Rab, and other brands use Alpha in breathable, insulated jackets that perform similarly to the Patagonia line.

Patagonia itself has Polartec Alpha jackets, too, including the made-in-the-USA Level 3A.

A final note: Old-school, used wool sweaters can work in a similar fashion to these pricey pieces; see our breakdown on the subject of sweaters here. You don’t get the tech design or look (or weather-blocking qualities). But a thick ply of wool is often highly breathable, warm, and at second-hand shops can be found for cheap.

At $249, the Nano-Air Light Hoody is fairly priced in the scheme of tech jackets made for the outdoors. If you spend winter moving fast and getting sweaty while ski-touring, climbing, or snowshoeing you’ll reach for this jacket day after day.

The face fabric, a nylon ripstop with a DWR (durable water repellent) finish, works in snow and even light precipitation. Water runs off the soft fabric more than anticipated.

It’s not a waterproof jacket, though. You need to bring a Gore-Tex shell or the equivalent to layer on top if you’re out in weather all day.

Overall, I like Patagonia’s take on the “active insulated” category and find the kit on my body many days this winter already while moving fast (and sweaty) across the snow.

Up Next: Columbia Goes Rogue With ‘Star Wars’ Jackets