The evolution of the raincoat continues. This week, The North Face launched its first-ever ‘softshell rain jacket.’ 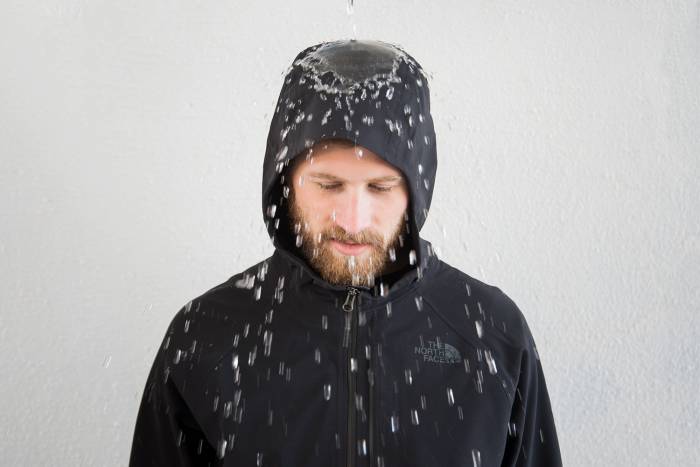 Just in time for April (or March) showers, The North Face unveiled the built-for-rain Apex Flex GTX line. The company calls it an “industry first.”

With a soft, stretchy outer fabric, the jackets feel like traditional softshells. But a Gore-Tex membrane, seam tape, and DWR make them 100 percent waterproof.

We reviewed both models in the line this week, including during a frigid March rainstorm where temps hovered at 39 degrees.

It’s a big claim to cite these jackets as a “first” of their kind. We asked The North Face to explain.

Though not sold as rain jackets, there are numerous waterproof softshells on the market, including the Zion from Marmot, and Triple Aught Designs’ Stealth Hoodie LT, just to name two.

We got in touch with a TNF senior project manager, Lea Waymire, about the “industry-first” verbiage. She noted the claim referred to the jackets’ unique construction and their price.

“For $199 you won’t find anything like this on the market, specifically because of the combination of fabrics offered in this three-layer jacket,” she said.

Indeed, the above-mentioned competing softshells, which have been on the market for a couple years, cost $400 or more. The Apex Flex GTX Jacket and the Apex Flex GTX Disruptor Parka come in men’s and women’s models and cost respectively $199 and $230.

The Apex Flex line uses a stretchy face fabric, a Gore-Tex membrane, seam-taping, and DWR treatment. None of this is new alone, though together The North Face has a new take on the rain jacket.

Can a new type of Gore-Tex fabric revolutionize shell jackets? We test the HyperAir GTX Jacket from The North Face to find out. Read more…

We have not seen outerwear of this type marketed as a rain jacket. The company leans on the fact that it “doesn’t feel or sound like an average rain shell.” This is correct; wearing the Apex Flex Rain Jacket and Disruptor Parka is more akin to pulling on a winter shell.

The jackets are substantial. Each hovers around 2 pounds in our men’s size large. That is at least two times heavier than the rain shells we often employ.

Both of these jacket styles, the Apex Flex Rain Jacket and the Disruptor Parka, use three-layer construction. The woven face fabric is stretchy but also almost canvas-like, with a flat, matte finish. Inside, a lithe knit material is comfortable and soft.

In between these layers is a breathable Gore-Tex membrane “specifically chosen by Gore based on how it interfaced with the selected woven and knit,” Waymire said.

We tried both styles, dousing them in water, and wearing them during activity and around town. It rained on one hike, and we also biked in the parka through a March storm.

As mentioned above, the first thing we noticed was the weight. These jackets are substantial. In a men’s medium, the Rain Jacket weighs 27 oz. and in men’s large, the Parka is 28.2 oz.

They are not made for backcountry use. Sure, they’d cut it on a long hike or a climb, but there are better options.

The Apex Flex line is for shorter excursions and for workaday use around town. Their subdued look makes them wearable across a range of activities, from the outdoors to the office.

For camping, cool-weather and rainy-day walks, fishing, or easy paddling in a canoe, the jackets here will work. They are waterproof, wind-proof, and the breathability is average. The Gore membrane is an industry standard, and you’ll notice standard breathability with this jacket.

It certainly does stand up to rain. In drizzle, both the Parka and Rain Jacket kept out the cold spray.

But to really try it out, we doused ourselves with a jug of water, over the hood, shoulders, and back. With its fresh DWR, the water immediately beaded and rolled away, leaving no trace or damp spots on the shell.

Next month, a kit of clothing and outerwear made for climbing comes to market as The North Face's 2015 Summit Series collection. Read more…

As for the softshell feel, the coats are comfortable and warm, and mostly soft. One editor noted the coats, though quieter than some traditional hard-shells, sounded like the subtle rubbing of corduroy pants when we moved around. 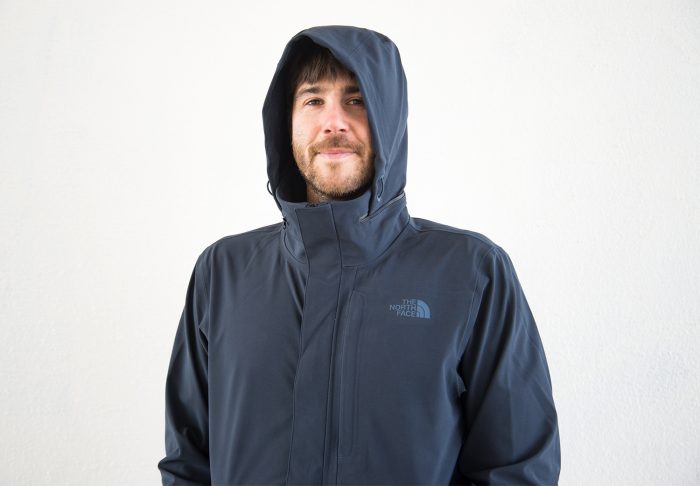 The jackets are comfortable as an outer layer and very protective from rain. The fit is baggy, limiting their use to hiking and everyday use.

A note on fit: The jackets run big. The Apex Flex GTX Disruptor Parka especially is sized too large. Our 6’1” tester, who weighs 180 pounds, was swimming in the size-large Disruptor Parka. If you can, get to a store and try these on before buying.

For higher heart-rate activity, neither coat is breathable enough for sustained exertion. You will get sweaty, even with the vents open. Think of these as shells to keep you warm and dry, not as breathable activewear.

Check out the Apex Flex line if you want a warm coat for autumn, spring, and mild, wet winters. The Rain Jacket and Disruptor Parka cost $199 and $230 respectively. They went on sale this week, just in time for March sleet, drizzle, and the spring torrents to come.

Up Next: First Look: REI ‘Magma’ Down Jacket