People are vowing to throw away their Benchmade knives, pointing fingers and calling for boycotts of the brand following a seemingly innocuous Facebook post made by the Oregon City Police.

Much like the YETI and NRA explosion of yesteryear, Benchmade Knife Company is currently in the crosshairs of gun rights advocates. 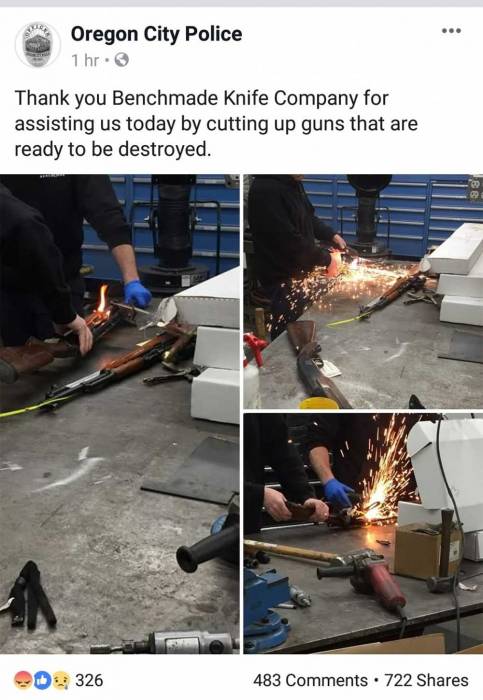 The police department Oregon City, Ore., where Benchmade is based, went to Benchmade asking for help in the legal destruction of seized firearms. Benchmade assisted.

For context, the way police departments deal with guns in their possession varies. In Ohio, law enforcement destroys seized guns. In Kentucky, by law, the police department is required to sell them. For the Oregon City department, however, selling guns in possession is off the table; they’re required by law to destroy them.

Afterward, the police gave thanks to Benchmade in a Facebook post. And then the internet got ahold of it.

This post suddenly turned into a firestorm of Second Amendment rage, followed by hundreds of people disavowing Benchmade for not only being party to destroying guns, but tying this back to Benchmade’s supporting a few Democrats in recent elections.

“We apologize for the confusion and concern that this post created. These were firearms that the Oregon City Police Department had to destroy in alignment with their policies. Oregon City Police requested the use of specialty equipment within the Benchmade facility to follow these requirements, and as a supporting partner of our local police force, we obliged the request.

Benchmade is a proud and unwavering supporter of both law enforcement and Second Amendment rights. These are commitments that we do not take lightly and will continue to support well into the future.

When asked for clarity from Oregon City Police Department, Chief Jim Band made the following statement:

Following Dick's Sporting Goods and Walmart's move to restrict firearm sales to customers 21 and over, a 20-year-old Oregon man is suing the retailers for "age discrimination." Read more…

Those Anti-Gun Politicians, Though

Opponents thrust Benchmade into the spotlight for destroying guns and running politically left in a few instances. But there’s another side to this coin that is not simply a black-and-white party line.

Shrader is a longtime public lands advocate, and he fights consistently on the side of access. He’s also a longtime champion of the Land and Water Conservation Fund. And he’s a member of the Blue Dog Coalition, which is made up of fiscally conservative Democrats. He has a score of 93 from The League of Conservation Voters. In December 2017, he was one of six Democrats who voted to allow concealed carry licensees to carry their weapons in all 50 states. He is one of few Democrats to have received funding by the NRA in addition to a B rating by the organization.

Heinrich, meanwhile, is another stalwart on the side of public lands. He’s a lifelong hunter and conservationist, and he consistently works across the aisle with Republicans to get things done on behalf of public lands. Heinrich supports some reform. However, he is a gun owner and believes in responsible gun ownership. Both his words and his voting record support that, as does a former A rating by the NRA. (It’s worth noting that Heinrich has recently changed his stance on aspects of gun control that pushed him to a current C rating.)

While the Oregon City Police Department subsequently took down its original post thanking Benchmade, officials addressed the fallout on Facebook.

It’s unclear how long this backlash will last and if it will impact Benchmade. But the brand acted according to the law and continues to support servicemembers of all stripes.