ARTCRANK launched in 2007, and the bike-art show soon became a phenomenon engaging artists around globe.

This week, we caught up with ARTCRANK founder Charles Youel to discuss 2015 and what’s new for the “poster show for bike people.”

How do you explain the show to people who’ve never heard of it?

I always describe ARTCRANK as “a poster show about bicycles.” And if that doesn’t cause people’s eyes to glaze over, I’ll say a little bit about getting local artists to create posters about what bikes and cycling mean to them, then throwing a pop-up bike art show where we sell limited-edition prints.

And if they haven’t yet started fidgeting uncomfortably, I’ll tell them that since 2007, we’ve done more than 60 shows in cities across the U.S. and abroad — including London and Paris. At that point, I take a long sip of my cocktail and say, “But enough about me. Let’s talk about you.”

The genesis: How did the idea of ARTCRANK come about, and how did you get started putting it into motion?

I started ARTCRANK in 2007, at a time when most of the creative work I was doing for my day job at an ad agency focused on digital interactive projects. I wanted to do something that combined my love of design and bicycles, and to do it in a way that celebrated handmade artwork and live events where people actually had to show up to be part of an experience— not just press a button.

In retrospect, this was all happening at roughly the same time that poster art was becoming a serious pop culture commodity, and people were discovering or rediscovering how flat-out fun it was to ride bikes.

ARTCRANK combined bikes and art at the right moment, with the added element of accessibility from a cost standpoint. After the first show, we decided to price all of the posters the same, and to make that price as affordable as possible. So this year, people who come to our shows will be able to get a handmade work of art created by a local artist for $40.

Tell me about opening night of the first show. What you were expecting? How did you feel when it was over?

I’d been doing some work with Gene and Jennifer at One On One Bicycle Studio, and they loved the idea, so we held the first show in the shop. This was my first art show, so it was a process of basically making things up as I went, trying to learn as much as I could from people who knew more than I did.

We asked the artists to drop off their posters one week before the show, and the night before they all came in I couldn’t sleep. We had 35 artists in the show, and I was absolutely convinced that we’d get 35 more or less identical posters. I have to laugh when I think about that now, because our collection has grown to more than 2,000 posters. And while there are definitely recurring themes in the work, every one is different.

As for the show itself, I expected about 50 people to show up, and we got more than 500 on the first night. That kind of success was the one thing I hadn’t really planned for, and it was more than a little overwhelming. My defining memory of the evening was seeing Gene making his way through the crowd with his 18 month-old daughter on his shoulders. He came up to me, grabbed me by the shoulders, and shouted “What the fuck have we done?!”

Other than that, most of the night is a blur. I remember riding home from the shop at about 2:00am, utterly spent but still sporting a bulletproof smile.

When did you decide to branch out to other cities, and how did that go at first?

Not long after we did the first show in Minneapolis, I started getting emails from people in other cities — in the U.S. and abroad — saying, “This is such as cool idea! Would you ever do a show in my city?” I was still trying to wrap my head around what had happened in Minneapolis, and of course I also had a full-time job. I liked the idea of doing more shows, but the logistics of pulling it off were pretty daunting, especially since I hadn’t really started thinking of ARTCRANK as a business, per se.

In late 2008, a designer named Rob Angermuller, who created the ARTCRANK logo and built our last two websites, told me, “I know a couple in Denver who would be the perfect people to put on a show like ARTCRANK. You should talk to them.” As it happened, I was flying to Denver literally the next week. So I met the husband, who’s a graphic designer and artist, over breakfast while we were there, and basically said, “Here’s what I know. See what you can do with it.” 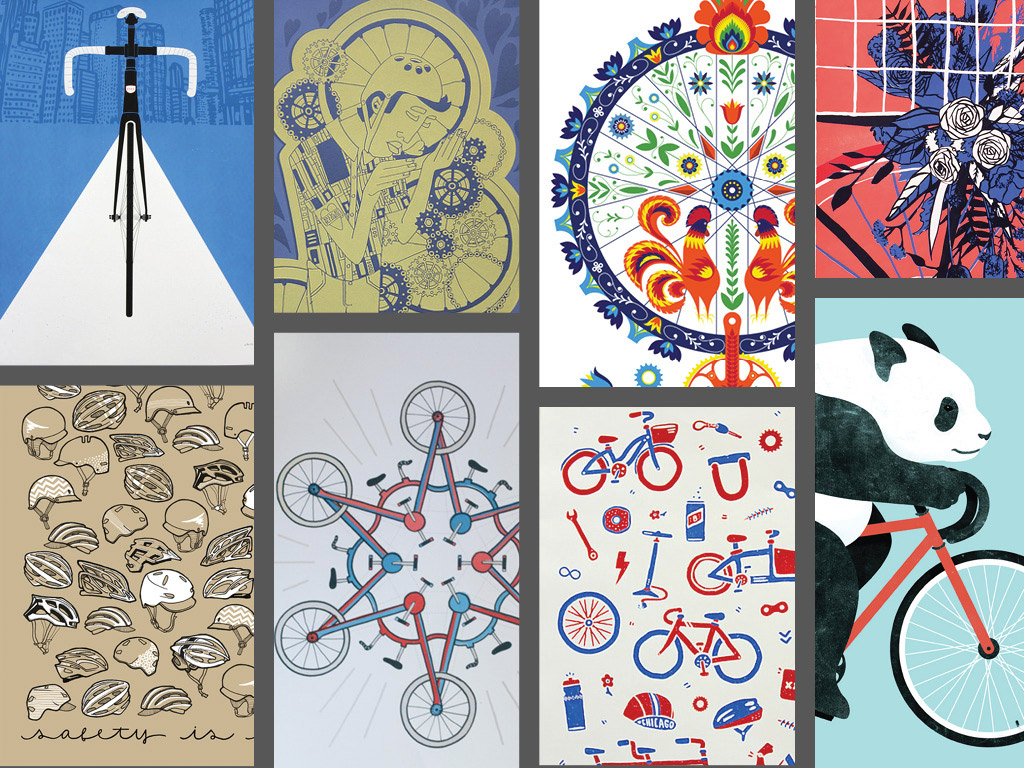 Not long after that, in January of 2009, I lost my job in the current recession to end all recessions. After close to 20 years in advertising and design, I wasn’t ready to get another agency job. The idea of turning ARTCRANK from an annual event into a traveling show sounded like a huge challenge, but also a lot more fun. So basically overnight, we went from being a show in Minneapolis to adding shows in Denver, St. Louis, Portland, and San Francisco.

Other than Denver, I worked all of the shows more or less solo with a few local volunteers. I had to figure out how to build a model for the show that could be staged in one day, using only what I could cram into a suitcase. So much of what I learned from that year is still very much a part of the way we work today. Especially the part about being too old to crash on friends’ cat piss couches.

How many cities has the show appeared in? Which year had the most shows?

Altogether, we’ve done shows in 18 different cities, in three countries. Our biggest year was 2013, when we did 15 different events. That was completely insane. Between 2012 and 2014, we averaged 14 shows a year.

Tell me about your favorite ARTCRANK experience.

For me, every show basically comes down to one extended decapitated chicken impression. I have roughly a microsecond of serenity right before the doors open, because at that point there’s nothing else I can do to improve or screw up the experience that’s about to take place. Otherwise, I’m going at warp speed in all directions, trying to anticipate problems before they happen, addressing whatever unexpected nonsense pops up, and making sure that everyone else in the room is having a good time. Unsurprisingly, I tend to suck at living in the moment.

When we did our first show in London, I was absolutely beside myself with pride an excitement. As a kid who grew up in the middle of the country, London had always represented the epicenter of everything cool, and the idea of bringing something I’d created there was more than a little mind-blowing. But predictably, as soon as the doors opened, my head was on a swivel and my synapses were firing like a box of bottle rockets.

In the midst of all this, my wife grabbed my hand and pulled me through the crowd toward the front door. Snaking through the line of people waiting with various degrees of patience to get in, she led me across the street, put her hands on my shoulders and squared me up to look at the line of people stretched the length on the block, and said: “I want you to take a minute and enjoy what you did.

So for the first time in the history of the show, perhaps in my life, I did. And it was pretty cool.

The short version is, fewer shows, new projects, and big changes. We’re planning to do a total of five: Three in the U.S. — Minneapolis, Breckenridge, Colorado during the USA Pro Challenge, and an event in the Bay Area that’s still a bit TBD — as well as one in Paris, and one in London. This is in the interest of burnout avoidance, as well as to work on a couple other projects that we’ve had to shelve out of necessity for the past few years.

Specifically, a new website with an online poster shop where we’ll sell limited edition prints by artists from all around the U.S., and eventually the world. This is a huge leap for us, equal parts thrilling and terrifying, which is what lets me know it’s the right thing to do. Oh, and we’re also working on our first retrospective book of posters from the show, which we hope to have out in time for the holidays this year.

So yeah, not much going on.

Is there any plan beyond the current season to have more or less shows?

We’ve learned from the past six years that it’s basically impossible for us to sustain double-digit event schedules, physically and fiscally. Our vision for the future is to do fewer shows overall, but to make those shows into larger events. We’re also going to focus more on international destinations. Travel has always been a driving factor behind the show. And I’m looking forward to putting the idea that ARTCRANK can work anywhere that people love bikes and art to the test in some further-flung locations.

The subject of bicycles seems infinite, and the medium of the screen-printed poster is so accessible. Do you think ARTCRANK (or even “bike art” for that matter) has continuous appeal? 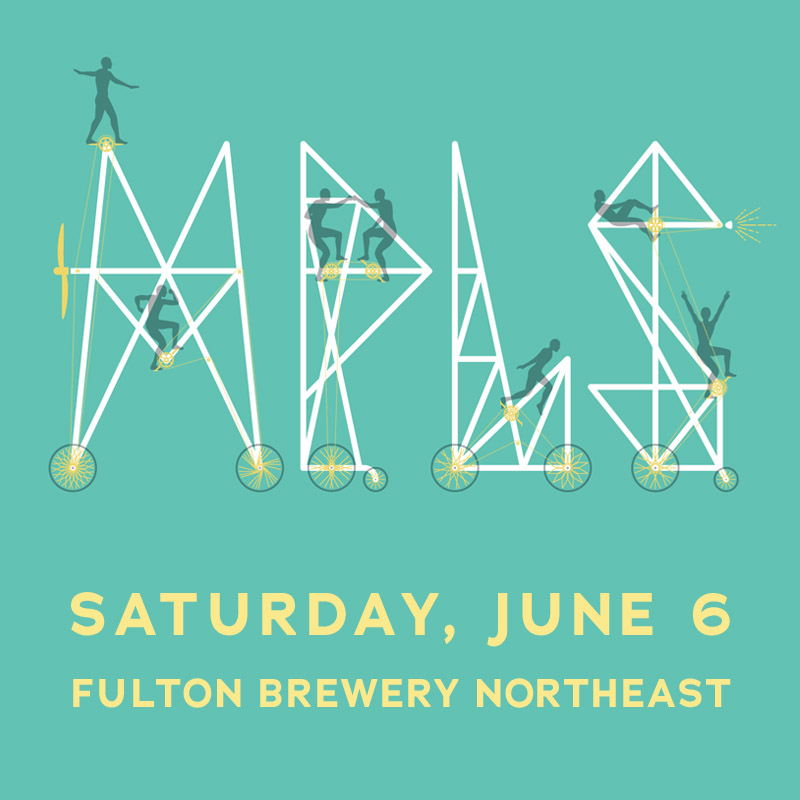 I’ve never assumed that the wave of momentum we’ve been riding would last forever. By the same token, I’d never imagined that we’d be able to do as much with the simple idea of “bike poster show” as we have.

I think there will always be a market for bike-inspired art, and I also think that creating affordable art through a medium like screen-printing will always be attractive. The changes that we’re making to our business this year are designed to help us reach more people in more places. If what we do finds as much traction with that new audience as it has to date, we’ll be doing this for a long time.

—Bjorn Christianson writes “The Low Five,” a weekly column examining the world of biking through the lens of the Minneapolis cycling scene.

Up Next: Can Olympic Cyclist Power Toaster?