The Canyon Grail:ON represents the next big thing in cycling: gravel e-bikes. And this new wave will suit a host of riders, whether you’re commuting to work or heading out to explore.

As the debate over access versus impact on trails wears on, mountain e-bikes continue to struggle for acceptance in the U.S. Meanwhile, fire roads, dirt roads, and paved roads remain fair game. And that’s the terrain that Canyon’s single-chainring, Bosch Performance-powered Grail:ON electric gravel bike was made for.

Canyon says that “e-gravel” is about using the extra power of a motor to add a new dimension to everyday rides, that it lets commuters and city cyclists get where they’re going faster. But it also gives them oomph enough to get away with an off-grid adventure in a matter of hours, not days.

In short: The Grail:ON represents a new category of bikes, gravel e-bikes, that skip back and forth across the fun-functional line. They work just as well for an assisted escape into the woods as for commuting or running errands.

The bike was a pleasure to ride, with and without the pedal assist turned on. For gravel, a top assist level of 20 mph was generally good enough. But when we popped out onto hardpacked or paved surfaces, we wished for more juice. It’s a bike that will surprise and delight any rider, and help those who want to explore reach beyond their perceived limits.

A sister bike to Canyon’s race-y double-decker handlebar Grail, the Grail:ON has some of the same signature features: the Hover bar and shock-absorbing leaf spring seatpost, for example. But the geometry of the two bikes is different.

The carbon fiber Grail:ON has a longer wheelbase than the original Grail, with 50mm Schwalbe G-One Bite tires for traction on uneven terrain, especially when your bike is heavier and your travel receives a motor boost.

Plus, the Grail:ON’s tires are 10 mm wider than its non-motorized cousin. And the still relatively light carbon frame is seriously beefed up. In some places, the frame’s wall thickness exceeds 4 mm, which is more what you would expect to see on a downhill bike.

The bike’s DT Swiss HG series wheels are specifically designed and built for e-gravel, with stainless steel spokes and steel-reinforced hubs that withstand the motor’s torque. Hydraulic disc brakes use 160mm rotors in the front but can be retrofitted with an adapter to fit 180mm rotors for even more braking power. 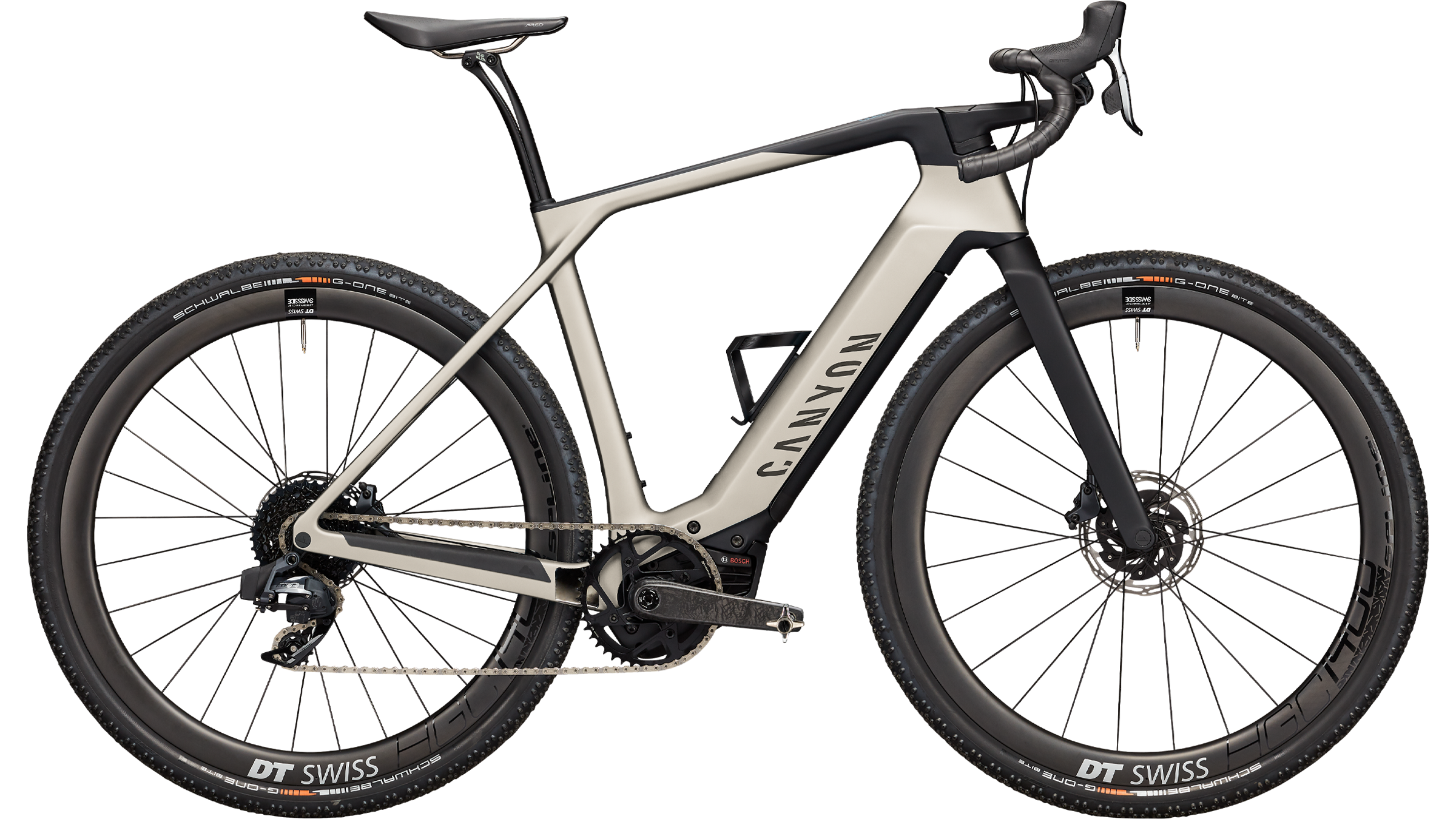 Bosch’s CX Gen4 drive system offers up even power, with 85 Nm of torque that gives riders up to 340% support over their own muscle. That support proves delightfully punchy, which makes for an addictive “just-one-more-burst” riding experience.

Johannes Gabel, lead engineer for the Grail:ON Project, said that Canyon worked with Bosch to adapt its eMTB system to be just as powerful but also provide a feel more consistent with gravel biking.

The support curves are not as progressive, and in some modes they are linear. Higher power modes feel similar to what a rider would experience on an eMTB, and the lower modes have noticeably less surge.

“With no suspension, we wanted to avoid the acceleration feeling too sharp when you’re pedaling on a fire road or commuting on this bike,” Gabel told me.

Honestly, I felt a little guilty as I scooted along mellow climbs and up steep, punchy tracks, even when I wasn’t passing other riders. And I couldn’t wipe the smile off my face when I cruised through the Vermont countryside. In fact, this bike encouraged me to take the long way.

Knowing I had the extra power of the motor and battery behind me inspired me to explore all the side routes on one ride, some of which I’d been looking at for years but had never made the time to pedal. 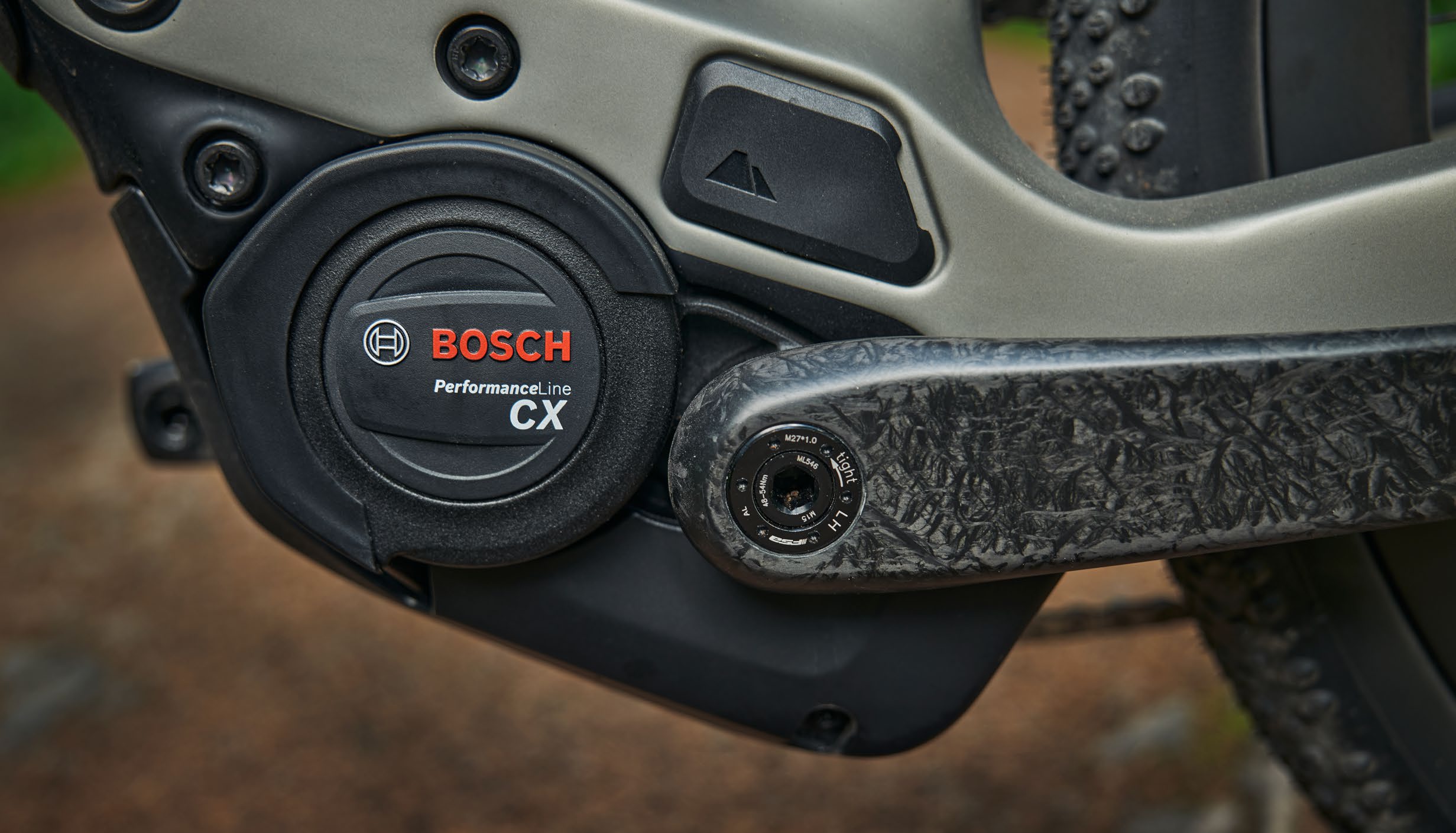 The Grail:ON has four riding modes. In all, the more you put in, the more you’ll get out. The two highest support settings, Turbo and Sport, serve up big helpings of power at higher cadences. Meanwhile, the two lower settings are cadence-neutral, with consistent support at any cadence.

Most of the time when I wanted assist, I opted for Turbo mode. This got me where I wanted to go as quickly as possible. I also found myself turning off the motor for long stretches. The 32-pound bike was not merely manageable, it was super fun to ride without assist.

When I hit a hill, I’d power it up with a quick click of my thumb on the double-decker bar-mounted remote, and away I’d go. For standing and climbing, Tour and Sport modes worked better — and I rarely used Eco. As a strong cyclist, I preferred to drive the bike with my own power, though this mode could be useful for someone who’s either using this bike to build fitness or isn’t an everyday rider. 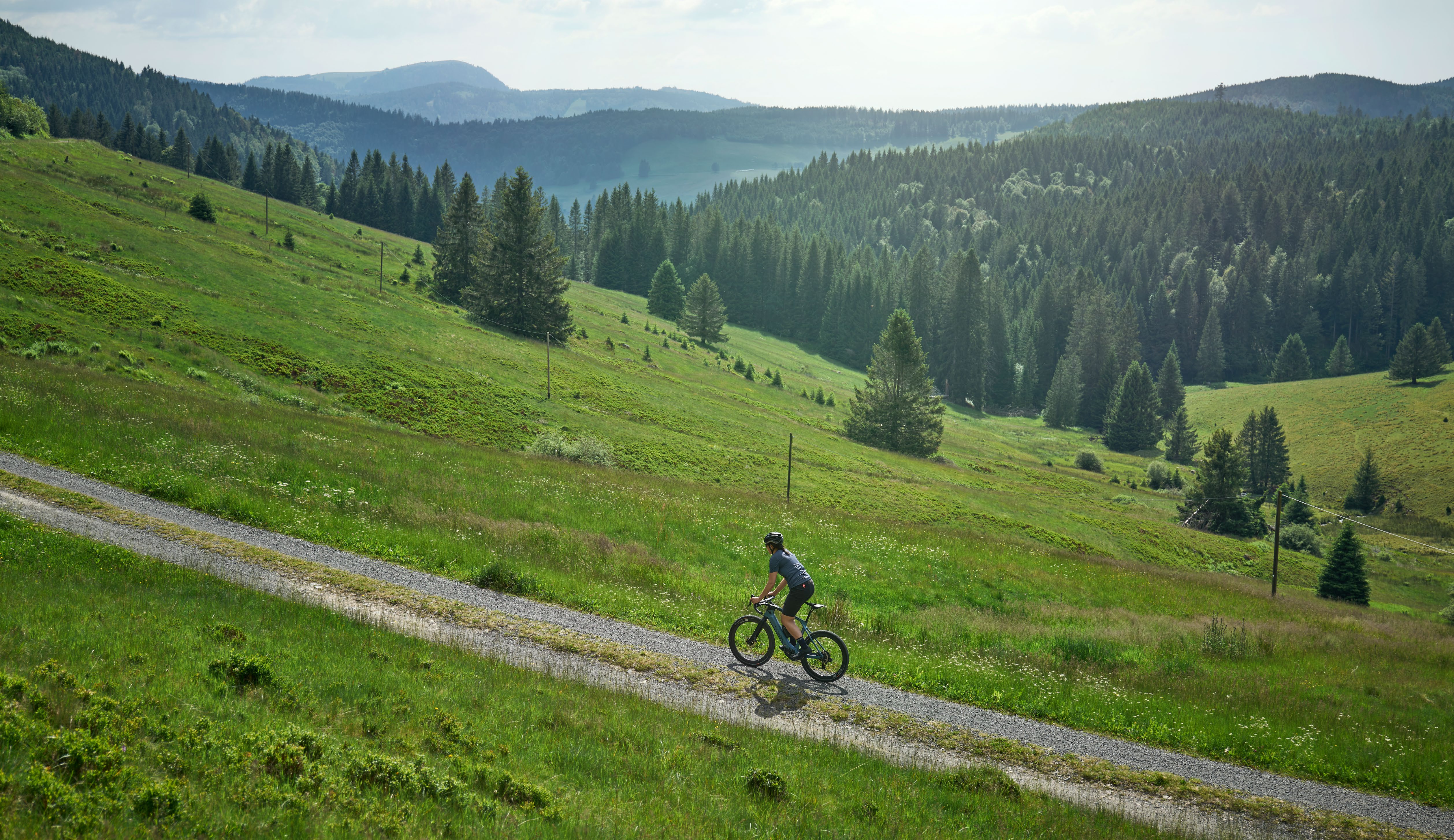 With seven frame sizes (2XS to 2XL), riders from 5’1” to 6’5” should fit this bike. As a 5’7” rider, I was on a size small; usually, I ride a 52-54cm frame. Small, XS, and 2XS roll-on 650b wheels to maintain nimble handling and proper geometry. The Grail:ON’s more relaxed and upright riding position further increases comfort.

Compared to the original Grail, which has a race-y feel, the Grail:ON has a significantly longer wheelbase, which makes the bike more stable. The tires are the same width as an XC MTB tire, with more gravel-appropriate tread that was fun, not sluggish, on pavement.

On the bike, I was in a more upright and relaxed position than I was on the Grail. I had good control, and it was easy to keep my eyes on the road or trail before me. 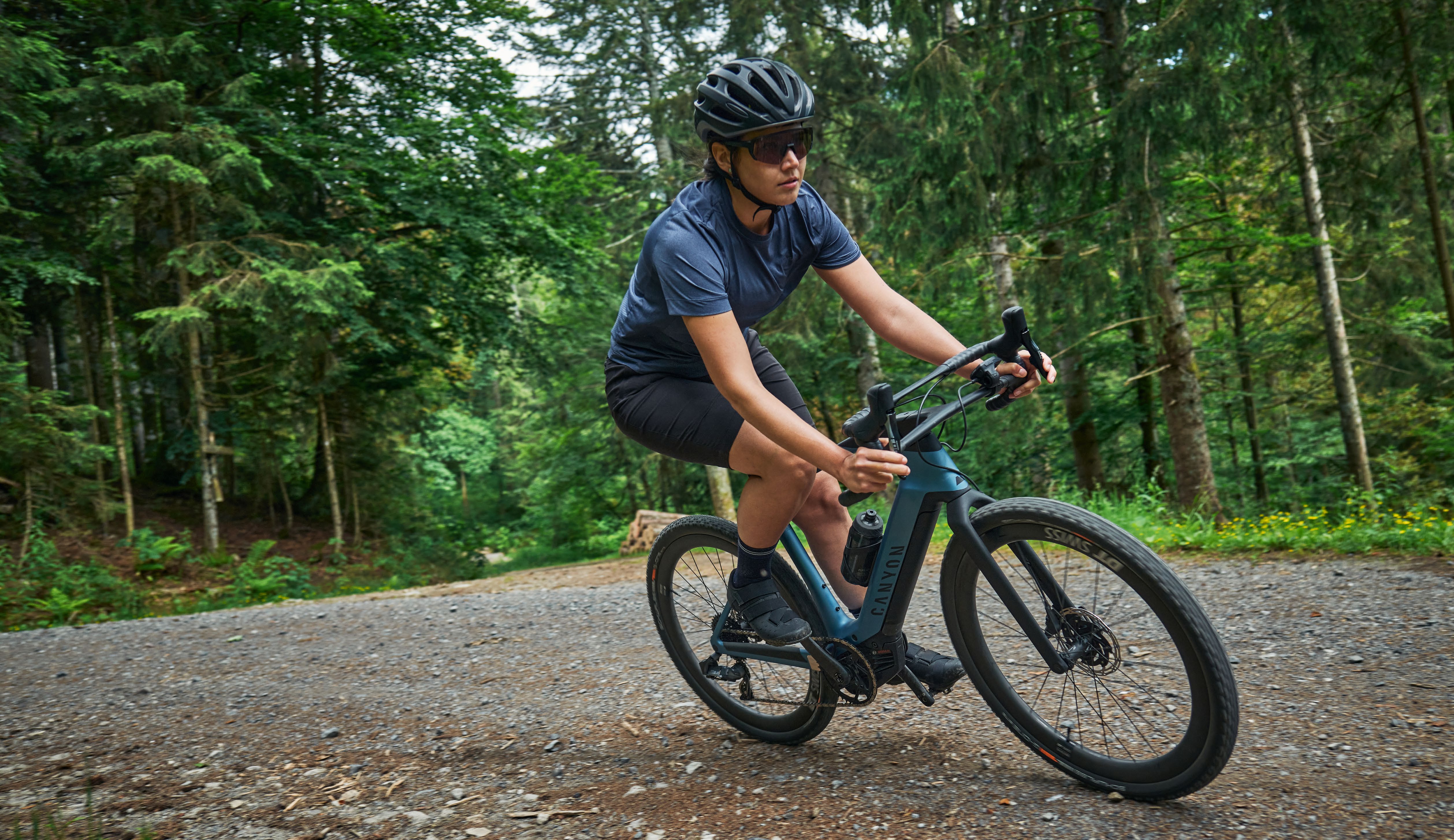 Inspired by mountain bike geometry and kinematics, the bike uses a short stem and wide bars, making the steering quick and helping you keep the bike under control.

The Grail:ON is sleek. Canyon opted to include fender mounts, but the brand didn’t include bag braze-ons or fork waterbottle mounts. Most gravel riders won’t do a multiday trip on this bike, though in Europe the infrastructure for that type of adventure is growing.

But top tube mounts, or extra fork mounts, would inspire riders to dream about big trips. And quite frankly, it’s great to have a bolt-on top tube bag for rides of any length.

The bike has a range of up to 68 miles in Sport mode from the 500wH battery and maximum motor assist up to 20 mph — the legal limit for class 1 e-bikes in the U.S., according to Canyon.

If it’s hilly, cold, or you choose a more powerful mode, expect less distance from the battery. Yes, you could bring an extra, but that’s a bulky prospect. And recharging the battery takes about 8 hours. Bosch doesn’t offer a range extender, and Canyon specced the biggest battery it could fit in the frame across its line of seven sizes.

That brings us to our only gripe with this bike. It’s a class 1 instead of a class 3, which means its max assist speed is just under 20 mph. That felt too slow. Matthew Leake, Canyon’s road and brand marketing manager, told me that the Bosch motor and battery in the Grail:ON is like having a Ferrari engine in a Mini Cooper. He was spot-on.

Power is at the forefront of the riding experience, and I wanted that power sooner. Because this bike is heavier than a non-electric road or gravel bike, and because the center of gravity is so low, I frequently found myself going over 30 mph on descents over smooth surfaces.

But when the road started to climb again and I dropped enough speed for the assist to engage, I kinda felt like I lost my flow. So I just hammered to keep the momentum I had. 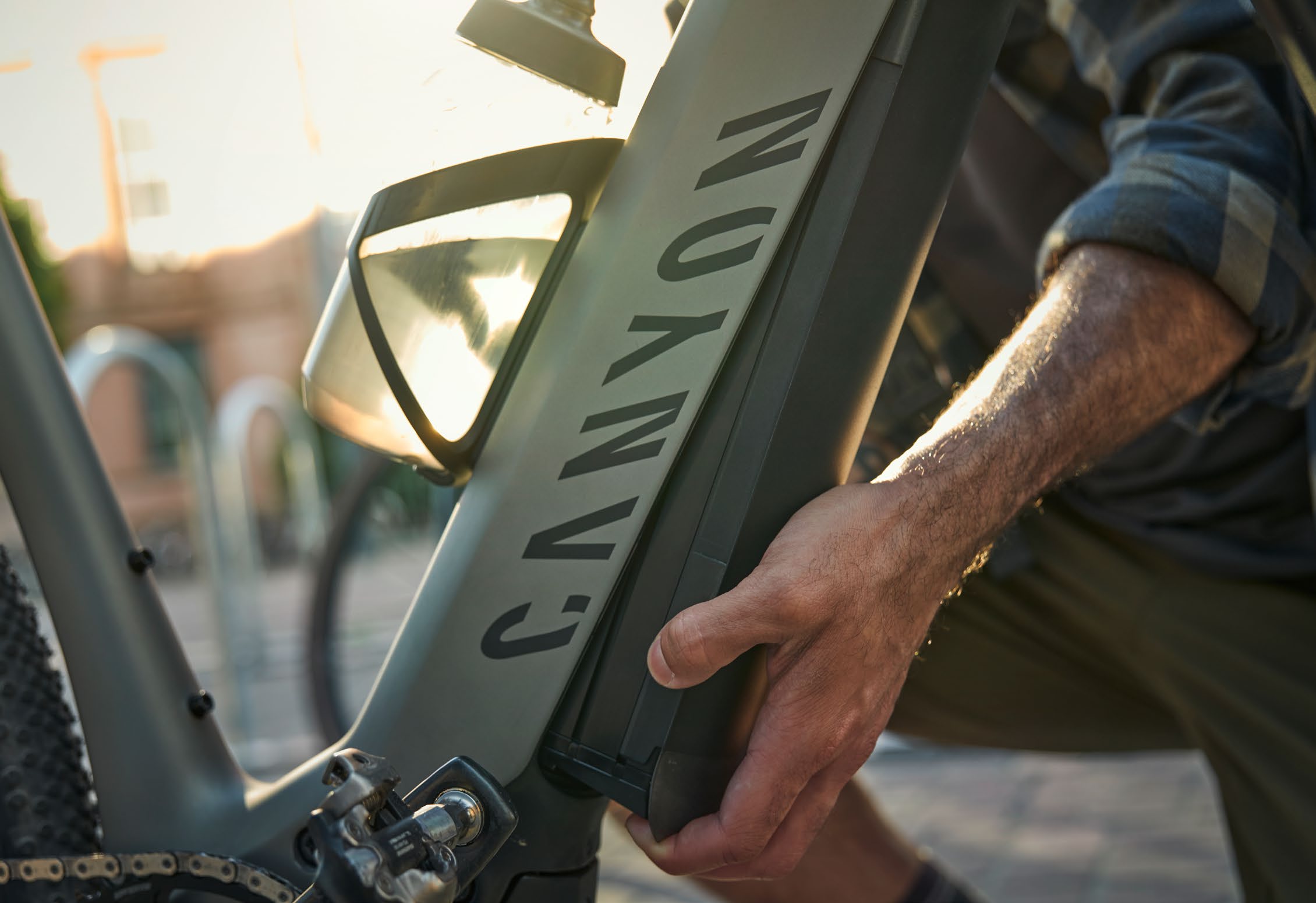 ‘E-Gravel’ on the Rise

E-gravel is clearly an emerging category. Just look beyond Canyon’s entrance into the electric gravel market. Niner Bikes, which has four gravel models, said that the popularity of gravel riding has continued to surge, and its RLT (“road less traveled”) series has become one of the most popular lines in its history.

“There’s a similar surge of interest in e-bikes happening right now,” Zach Vestal, Niner marketing manager, told me. “New riders are adopting e-bikes in record numbers. And the stigma of pedal-assist bikes among elite and enthusiast cyclists is fading. E-bikes will never replace pedal bikes, but they have an undeniable place in the pantheon of pedal-powered, two-wheeled experience.” 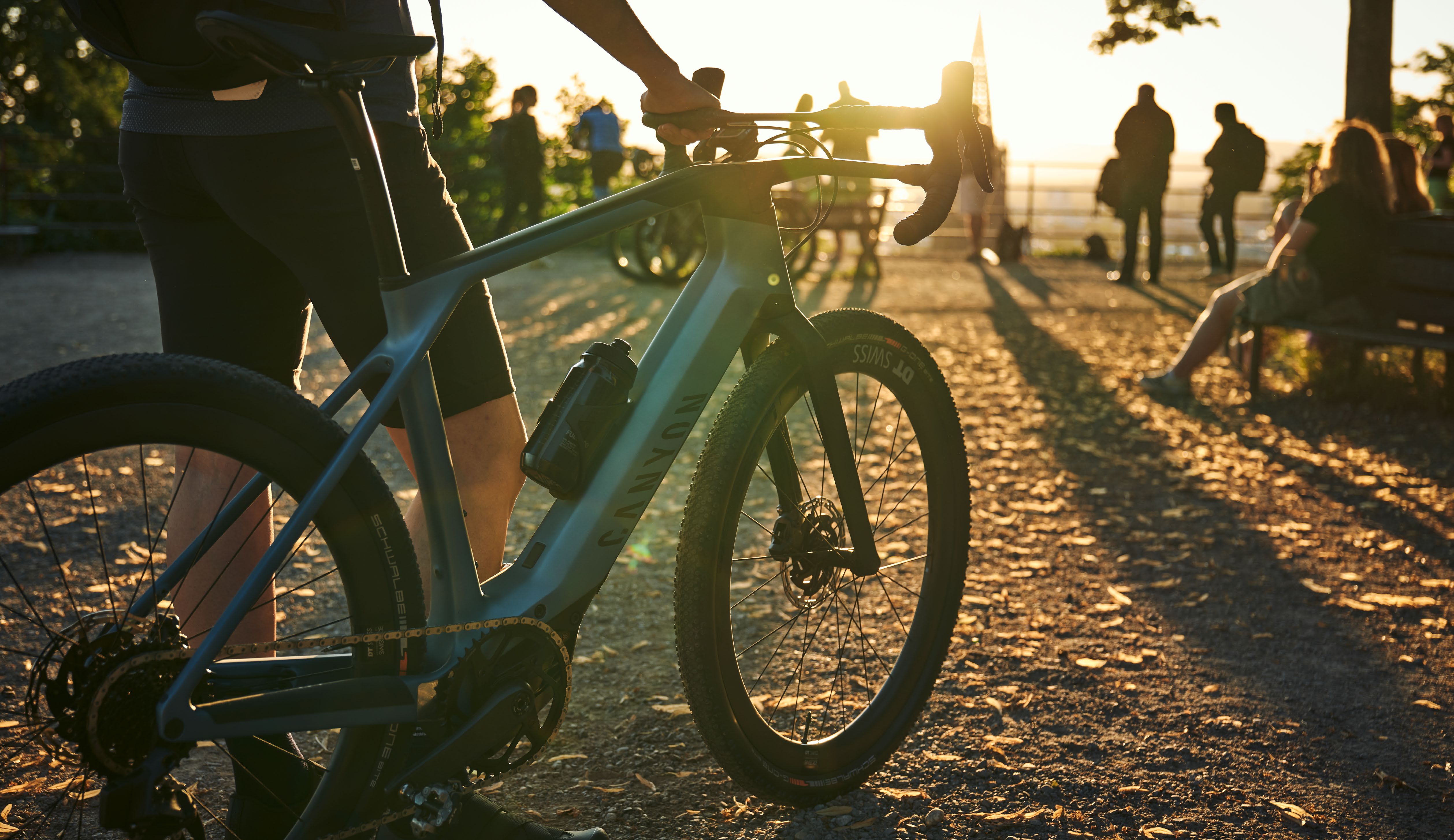 Meanwhile, John Cordoba, Specialized road and gravel product manager, took it a step further: “As gravel is growing, we see e-gravel with even more potential to bring new riders in. In the U.S., there’s a larger acceptance for drop-bar e-road and gravel bikes, so it’s definitely a wider range of riders here that are buying the bike for commuting and gravel riding.”

Since the onset of COVID-19, e-bikes have seen an unprecedented surge. With public transit and ride-sharing off limits or severely restricted, Vestal said that the imperative for e-bikes as a mode of transportation, not just recreation, is more urgent than ever. 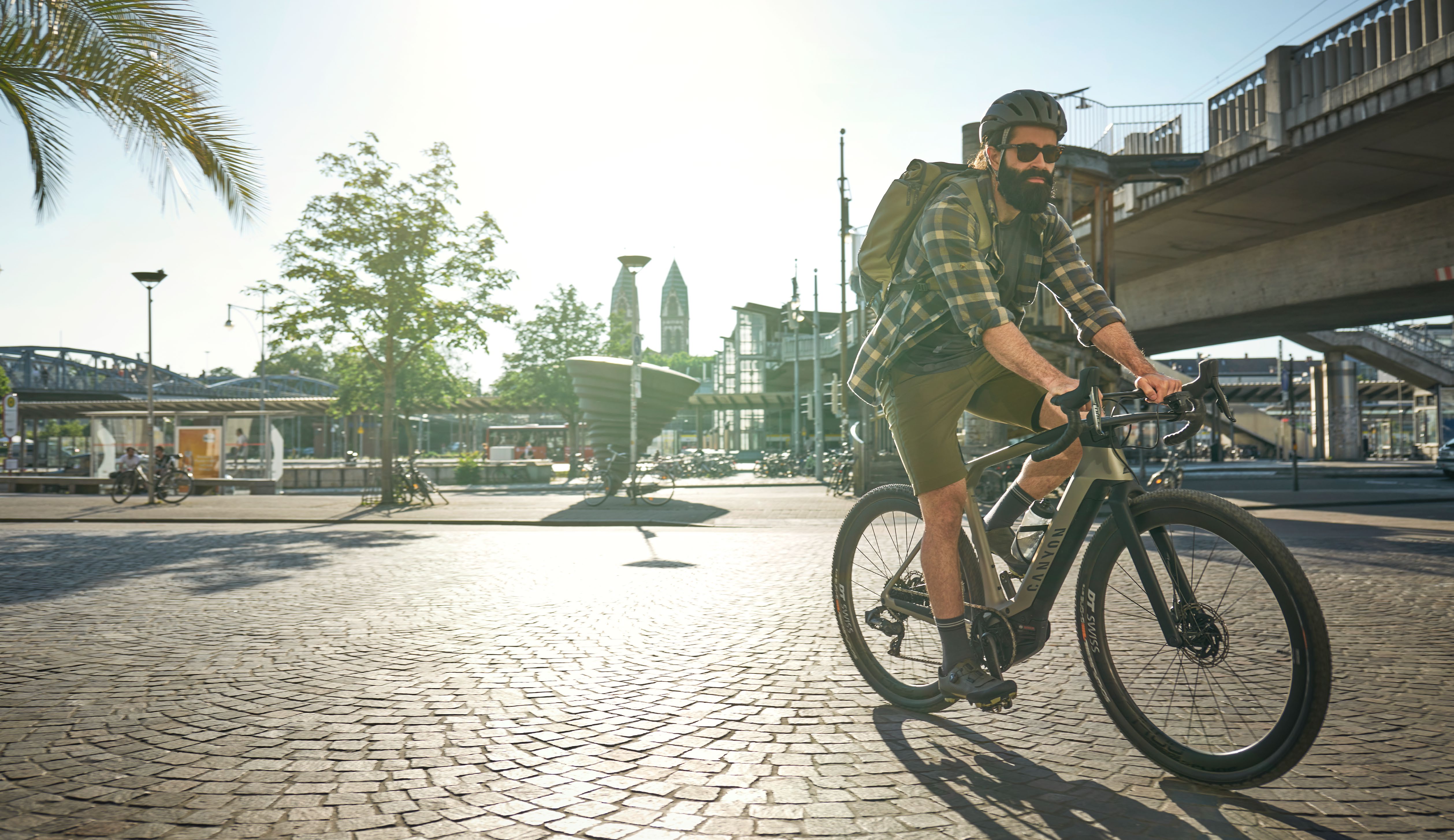 “We’re excited to see what happens,” Leake said. ”A lot of how you use this bike will come down to where you live. It’s a versatile commuter during the week that also maximizes fun when you want to escape into nature. It’s a nascent category.”

Up Next: Secrets of Shred: Explore One of the Best Bike Parks in Europe

Saving…
Secrets of Shred: Explore One of the Best Bike Parks in Europe
Bikepacker’s Paradise: Jay Petervary on the Arkansas High Country Route
×