Home » Biking » IBIS Ripley AF Mountain Bike Review: All the Fun for Half the Price

The IBIS Ripley is a well-respected and almost universally loved short-travel trail bike.

For years, the short rear triangle and DW-link rear suspension with a long and slack front end have delivered a playful ride — a mix of stability and agility that has mesmerized riders since 2013.

In 2021, IBIS launched the Ripley AF, the aluminum-framed cousin of the Ripley. The big play was the price.

A current Shimano Deore outfitted Ripley AF complete bike retails for $3799, nearly the same price as the carbon Ripley frame alone ($3,499). So comparably, the Ripley AF is quite the deal.

But what about the performance? Does it do the IBIS Ripley and DW-link names justice?

In short, the Ripley AF delivers its much costlier cousin’s pedaling efficiency and suspension performance. The tradeoffs are minimal compared to the cost savings. It is one of the best deals for a trail bike with proven DNA. 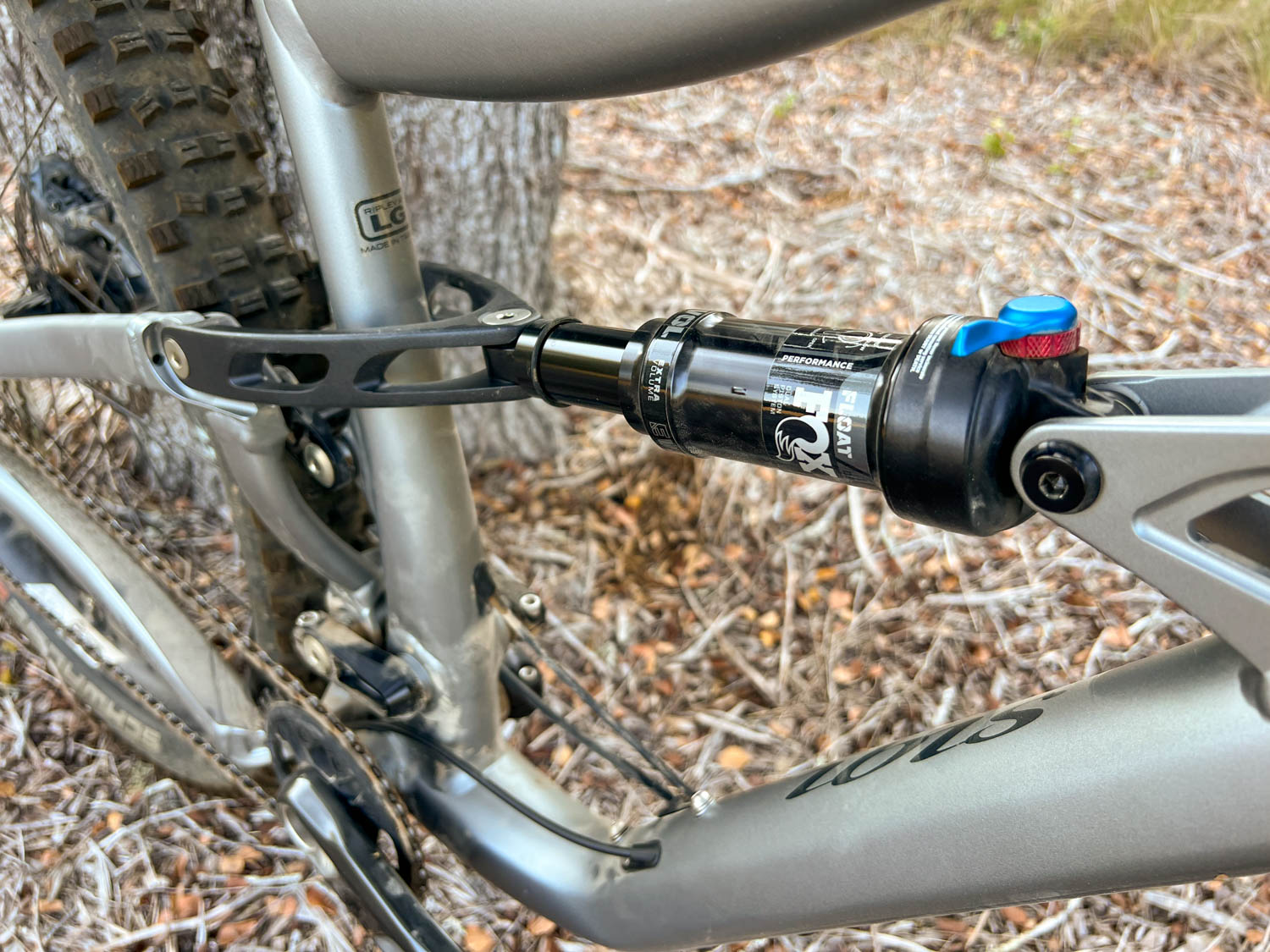 DW-link rear suspension has impressed me every time. The resistance to power-robbing suspension bobbing while seated has always been stellar, and it was the same happy story on the Ripley AF.

Whether churning a big gear on the flats or grinding the lowest gears on steep and rocky climbs, the DW-link provided a stable platform and put the most power into the rear tire. And this was with the shock left wide open. I never remembered once to change it. That’s how good the DW-link was for seated pedaling.

Stomping while standing elicited much of the same wonderment, but there was some bobbing. If I knew I had to stand a lot over a long period, I would consider switching the shock setting to a stiffer mode.

On the descents, both fast and flowy, and slow and chunky, the DW-link kinematics, Fox Performance Series Float DPS, and resultant 120mm of travel let me bomb down without hesitation or worry.

With the recommended 25% sag, I could tackle most intermediate lines at the bike park without any surprises. The rear end was predictable and never slowed me down. And again, this was with the shock wide open.

The Fox Performance Series Float 34 fork with 130mm of travel was a great match. Again, at the recommended 25% sag, I didn’t feel anything annoying while climbing and attacked descents with abandon.

Surprisingly, with both ends left wide open, I never once bottomed the shock or fork out, try as I might. I routinely bottom 130mm forks out on specific jump faces or drops, and it never happened once on the Ripley AF. This speaks to the progressive nature of the suspension when it’s near the end of travel.

Overall, I had zero complaints about the suspension on the IBIS Ripley AF. The balanced climbing and descending performance made it a super-fun bike.

And the grin factor increased with speeds; I felt the suspension action on both ends improved as the speeds increased while climbing, descending or on the flats.

The Rest of the IBIS Ripley AF 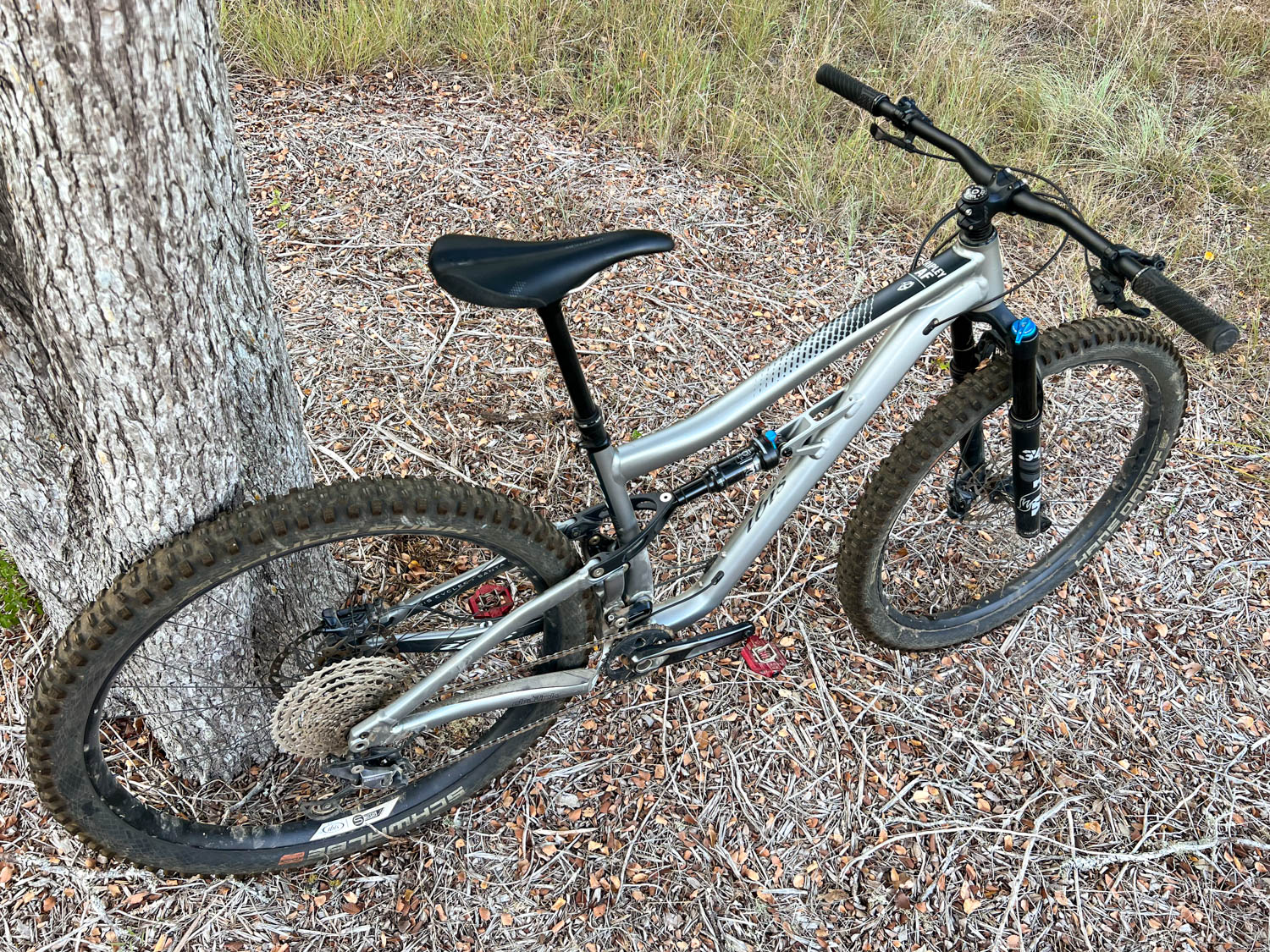 Our test rig was a 2022 version with a bit of an odd spec, mostly Shimano Deore with SLX brakes and Schwalbe tires (the current 2023 spec differs slightly). And again, I had no complaints.

I never missed a shift, even when churning a low cadence on a climb, desperately stabbing the shifter for lower gear inches. The brakes were impeccably well-behaved, from initial bite to full-panic stop situations; the predictability of response bolstered my confidence and begged me to push the limits of traction.

The IBIS-branded S35 aluminum wheels and Schwalbe tires took plenty of abuse in rocky terrain and emerged unscathed. The frame had the clearance for the 2.6-inch-wide Hans Dampf Addix SuperGravity Soft rubber, which I felt had a great mix of characteristics for our normally hard-packed and chunky lines.

I felt confident leaning over at speed after they transitioned to the edging knobs, which was surprising, as they felt relatively fast-rolling.

This bike delivered my first experience with a KS Rage-i dropper post. The cable-actuated 170mm travel dropper did its job reliably and was otherwise unnoticed.

One overall feeling about the Ripley AF warrants attention: it felt compact, especially vertically. This is compared to comparable bikes I’ve tested, like the Pivot Trail 429 (also DW-link).

The feeling could have been partially due to the IBIS’s 12mm lower bottom bracket height. The reaches were identical at 475mm. Regardless, the compact feeling added to my confidence when faced with scary drops or slow, super-techy, balance-oriented sections.

Finally, IBIS offers a stout 7-year warranty on the frame.

Our large-size test bike weighed a verified 32 pounds, 8 ounces without pedals, and was set up tubeless. The aluminum frame adds about 2 pounds compared to its carbon cousin. Of course, bike weights vary by part spec, but the Ripley AF is heavier than carbon bikes in the same class.

The Pivot Trail 429 Enduro build has a verified weight of 28 pounds, 15 ounces with tubes. Compared to all other carbon mountain bikes I was testing concurrently, I noticed the weight on climbs. But, I’m paid to notice.

On the flats and downhill, that weight difference mostly disappeared. And you have to remember; this bike costs less than half of all the other bikes I was testing at the time, some that break the $10,000 barrier.

One notable change that IBIS made between the carbon and aluminum versions of the Ripley is the one-degree slacker head angle on the AF. And indeed, the front end felt slow on very tight, twisty trails.

But the flip side is that the bike had a planted front-end feeling going downhill, and I never once felt twitchiness at speed. So, I felt this compromise benefitted the bike at speed, and again, I’m trying to notice.

If I shelve my knowledge of specifications, throw out the bragging rights, and narrow my focus to fun versus finances, the IBIS Ripley AF is superb. If you have a hard cap for spending on a trail bike, I think it will be difficult to beat this bike.

If you are fortunate enough to have a quiver of bikes, and your standard is carbon, then yes, the bike is likely heavier than other options. And maybe the slacker head angle is something you won’t like coming off a cross-country race bike.

But, and it’s a big but, you cannot disregard the thousands of dollars in potential savings.