Kick, kick, full throttle — Lime’s new electric scooter-share just landed on Denver’s city streets. So I hopped on a Lime scooter to see how it works. 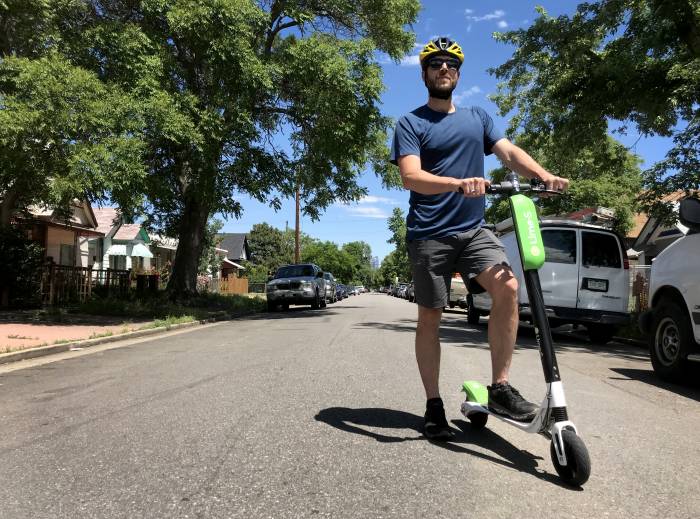 Following the map on my phone, I closed in on two giant glowing limes. Those namesake map markers notify you of the locations of groups of Lime-S electric scooters.

The dockless, pay-per-ride scooters hit Denver streets over Memorial Day weekend. And for nearly a week they’ve carried hooting, laughing commuters all over the city.

Launched this year by California-based Lime, Lime-S e-scooters propel riders up to 14.8 miles per hour. They’re cheap — just 15 cents per minute after a $1 unlocking fee — and best (or worst) of all, you can park them almost anywhere. More on this in a minute. 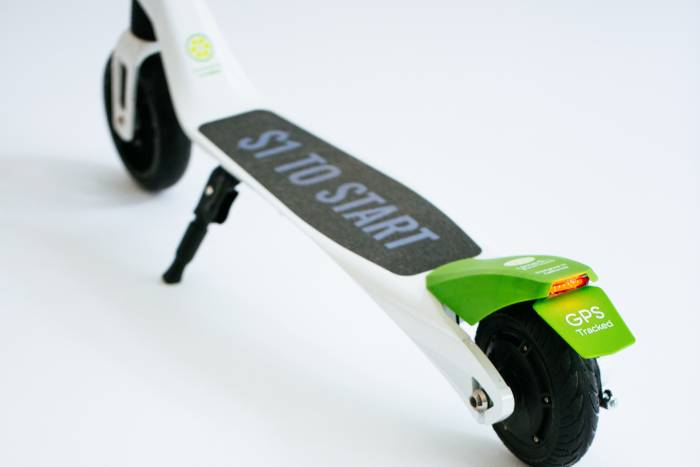 I downloaded the Lime app, found a group of locked scooters, and took one for a test ride.

Lime officially launched the white-and-green scooter fleet in February. With the pre-Memorial Day release, Denver is now one of the first cities with the new ride option. 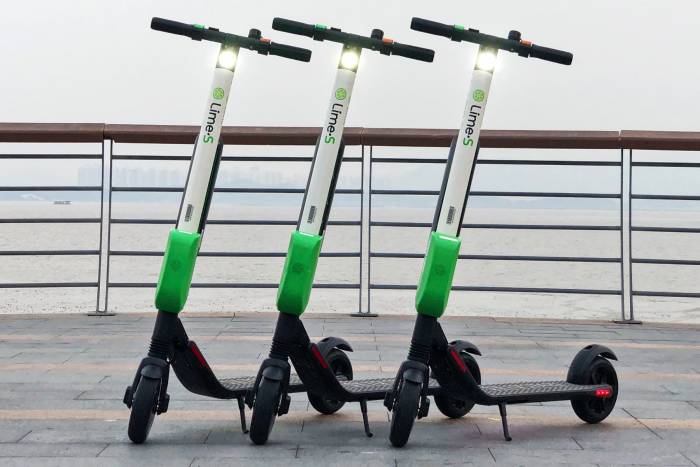 The big perk of the scooters — and Lime’s traditional and e-bicycle fleets — is that they’re dockless. Unlike many municipal bike shares, users can park and leave the scooters or bikes anywhere. Well, almost anywhere.

The primary problem that most cities (including Denver) have with adopting Lime is preventing people from littering streets and sidewalks with discarded bikes and scooters.

No, @limebike did not work with us on this launch. We were not notified of their plans to deploy in our community today until a couple of days ago. We are concerned about the use, placement, & quantity of these scooters operating on Denver’s sidewalks where we see a lot of peds.

Despite it being relatively common sense, Lime went so far as to publish parking instructions for its users. In a nutshell: Park it out of the way, not in the street or a bus stop. And leave it where others can easily access it. Duh.

Will people follow these instructions? It remains to be seen.

How to Ride a Lime Scooter

First, download the free app for iPhone or Android. Once you open the app, it shows you a map of your location. It looks like most smartphone maps with one exception — there are little green scooters and limes everywhere. 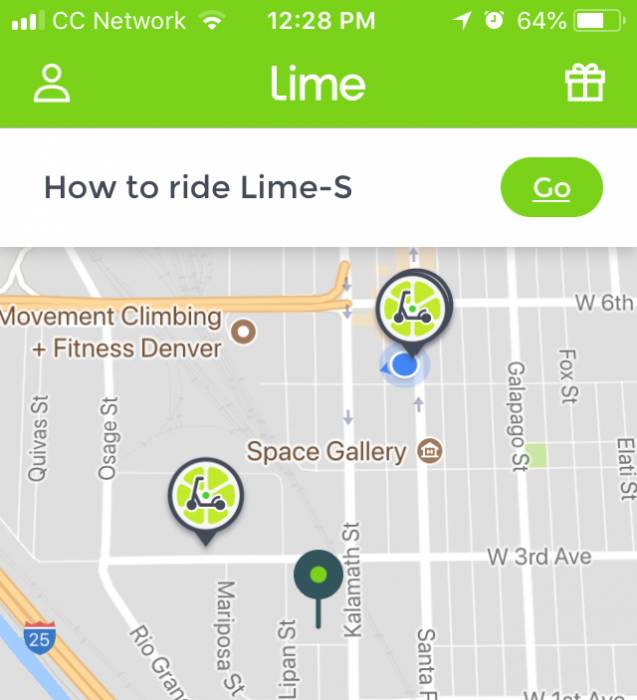 This real-time tracking is great because you can see exactly where the nearest ride is. But it’s also frustrating, as I learned 10 minutes into my walk to the closest scooter … which suddenly disappeared from the map. There’s no way to reserve a scooter, so tracking one down is a bit like Pokemon Go. You may find yourself rushing around city blocks in search of an elusive scooter.

Finding one to ride wasn’t too difficult, however. And checking it out was easy. Input a credit card, and then click the “Ride” button at the bottom of the screen. The app then accesses your camera, which you use to scan the QR code located on the scooter’s handlebars. 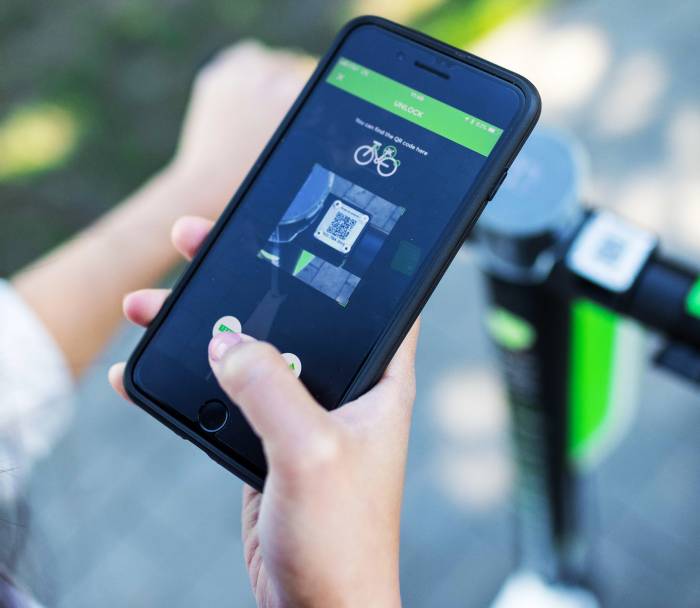 Once the scooter is unlocked, retract the kickstand and go! Riding is a breeze — give a couple of kicks to get going, and then thumb down the throttle toggle with your right hand. Even at full “gas,” the e-scooter doesn’t accelerate too quickly, and it’s nearly silent.

Of course, a helmet is advised. While the 250-watt motor won’t throw you off the deck, a pothole or rogue rock will. And the speed is enough to make riding on sidewalks ill-advised — if not illegal. To be sure, riding on a busy street, even on the shoulder, is uncomfortable. So these seem better-suited to side streets and residential backroads, where you can safely maneuver if you need to.

Once you arrive at your destination, click “End Ride” to stop the meter. Find a spot out of the way of pedestrian traffic and flick out the kickstand. The Lime-S is now ready for its next ride.

A note on payment: You can either pay as you go or preload credits. The latter option comes with some bonus coupons that give you extra ride credits.

And a note to would-be thieves: If you attempt to move a locked scooter, an alarm sounds, warning that police will be notified of theft if you don’t leave the scooter alone. 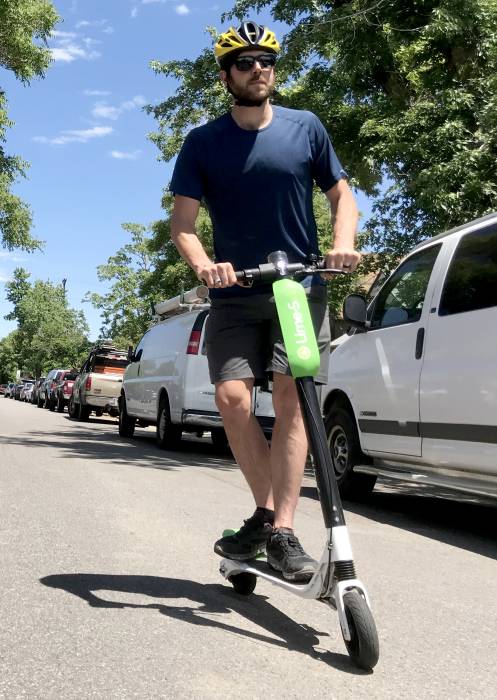 Another interesting consequence of not having docking/charging stations is that somebody needs to manually plug these electric scooters in to charge them back up.

Lime’s solution is to incentivize it for the public. Anyone can sign up to become a “Juicer.” As a Juicer, you pick up discharged scooters in your car or truck, bring them home, and plug them into a standard wall socket.

Lime will send Juicers a message the following morning with instructions on where to drop off fully charged scooters. According to Lime, Juicers receive up to $30+ per hour and $100+ per night.

We’ll continue to test out these rides and report on how they’re received locally. If everyone follows the rules, it could make for a fun way to beat the gridlock.