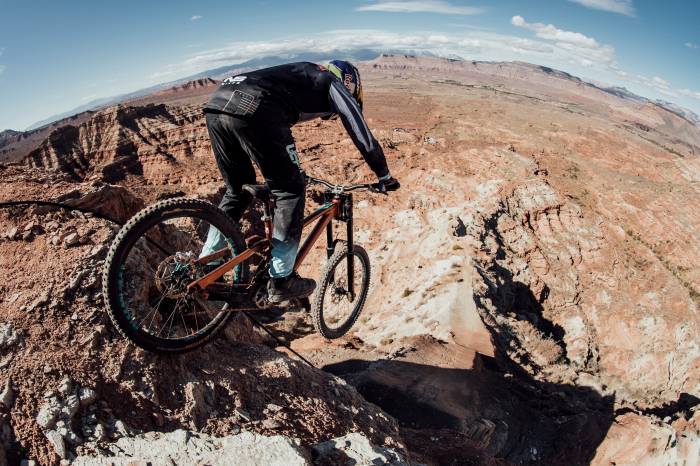 Unless you’ve seen Red Bull Rampage, you haven’t seen anything like it. Tune in to catch the world’s steepest, airiest, raddest MTB freeride competition.

They’ll tussle for the top spot and the accompanying notoriety while riding bikes with swingarms that look like they belong on motocross rigs. The rules, Red Bull says, are pretty simple: “ride down a mountain to the bottom of it, in one piece, in as spectacular a way as possible.”

Ready? Get psyched. Here’s everything you need to know to tune in to the action.

Where and When to Watch

If you can’t get to Virgin, Utah, at 10:30 a.m. MDT on Friday, there are a couple of ways you can fire up your computer and still catch the mayhem.

Red Bull TV and ESPN+ will each broadcast finals day live. If you’re in the U.S., you’ll have to plug into ESPN+; it’s got the exclusive rights here.

In all other countries, you can find the broadcast on Red Bull TV.

If you miss it, you can spring for an on-demand replay on either platform after the fact.

If you don’t know why you should watch Rampage, watch this:

Take a fireworks show engineered by dinosaurs while ramping monster trucks over explosions — that, but freeride MTB.

The spectacle of Rampage doesn’t need verbal descriptions to be rad. But any deliberate spectator should also consider the craftsmanship and creativity that goes into creating the perfect display.

The lead-up to finals is 9 days long for athletes. During the first four, they scout lines, groom trails, and build ramps with help from a hand-picked two-person crew. You can’t use power tools, and the only structural materials Red Bull allows are sandbags, so the work is heavy.

After that, practice starts. Riders can still tweak their lines during this 4-day rehearsal period. And riders can choose to share lines — that way, they can pool their digging resources.

Because the terrain is a blank slate, riders need to be ready for anything. Rampage veteran Cameron Zink explained his process for the lead-up to the event.

“[I] try my best to ride anything and everything so I don’t pigeonhole myself or have a preconceived notion of what I’m going to build and ride before we get here. You have the freedom to build whatever you want and highlight your strong suits as a rider but you’re also building on a mountain,” he wrote in an email.

“It’s a mix between your wildest dreams and what’s already there,”

Whatever they dream up, they need to start nailing it to have a real shot: Highlander-style, there can be only one Red Bull Rampager. That rider earns their stripes in the big dance after one rest day.

Each rider gets two runs on finals day. A panel of judges renders a score at the end. Whoever gets the highest score wins. In the event of a tiebreaker, the judges consider the combined score of both runs.

Rampage is invite-only, but riders who finish in the previous year’s top 10 qualify automatically. Wildcards — chosen by a committee of former Rampage competitors, pro athletes, judges, and so on — round out the field.

Nobody’s won more Rampages than Semenuk, with four. Kurt Sorge is right behind him with three, but he hasn’t competed in Rampage since 2017 (when he last won). Kyle Strait has won two Rampages and has arguably put in the most consistent performances at the event out of anyone in the field. 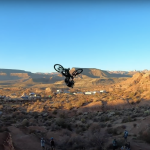 Red Bull Rampage happens tomorrow. Now you can get an exclusive look at the crazy lines — and competition. Read more…