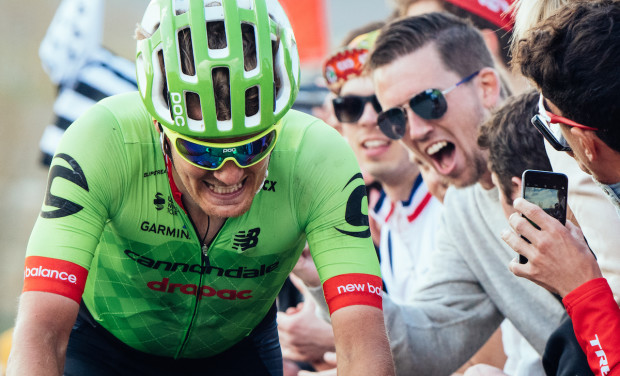 A sponsor backed out of a commitment and team Cannondale-Drapac found itself with a serious budget shortfall. Now, it’s ramping a crowdfunding campaign to keep the team alive.

The American cycling team Cannondale-Drapac needs your help. Based in Boulder, Colo., the team launched a creative fundraiser to meet a budget shortfall. It asked for help from its fans.

Here’s what the team said on the Indiegogo fundraiser page.

Recently Slipstream Sports management received some discouraging news about a new partner we anticipated joining us in 2018. Without this partner’s support, we cannot guarantee our financial security and subsequently our UCI WorldTour license for 2018. We want to be clear: All of our current sponsors and partners (Cannondale, Drapac, Oath, POC) have remained committed to supporting our team in 2018. These sponsors have lived up to their promises; however, without additional financial backing, the numbers simply don’t add up. We need your help to #SaveArgyle and ride in the WorldTour in 2018.

As stated, the current sponsors and partners remain committed to supporting the team in 2018. In a bold move, the squad has turned to its fans to try and make up the difference.

Known for the nickname Team Argyle, Cannondale-Drapac formed in 2005. It is one of the strongest teams from the United States, finishing the UCI World Tours inside the top 10 on five occasions between 2009 and 2016.

The team is managed by Slipstream Sports, the brainchild of Jonathan Vaughters and Doug Ellis. It claims an unwavering “commitment to anti-doping,” saying it was the first professional cycling team to institute its own internal testing protocols.

The team’s achievements include top finishes and stage wins at major events around the world. This year it finished second overall at the Tour de France with Colombian star Rigoberto Uran.

The team launched the fundraiser with the help of the Fairly Group, which will match donations up to $2 million. So far, the campaign has raised more than $270,000 from 2,230 backers.

The campaign runs through Sept. 12.

If you want to continue to see some of the top racers in the United States competing on the international stage, now’s the time to help. Rewards range from joining the team for a ride to helmets, jerseys, and more. If interested you can support the team at Indiegogo.