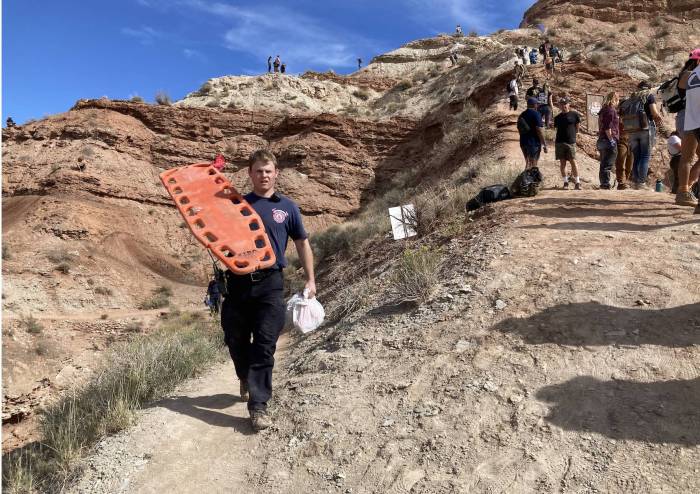 I stand in a media corral below the Red Bull Rampage venue with similarly bewildered and amped people. Above us, hand-carved ramps slash the mountain and make up what you’d call the ‘course.’

Can you call it that? I’m about to find out, up close and personal, thanks to Rampage veteran Darren Berrelcloth.

Berrelcloth and freeskier Michelle Parker, who helped orchestrate Red Bull Formation at this same location 2 years ago, are about to lead us on a hike to get acquainted with the Rampage runs.

They forbid us, firmly and repeatedly, from stepping on ramps or kicking rocks and we head up.

For anyone who doesn’t know why: A pebble in the wrong place can send a rider flying toward a wadded landing.

Diggers — the term for folks who build the course lines — are still working all over the mountain. It has two main bowls, and most riders are choosing the lines to looker’s right.

That’s where, tomorrow, Brandon Semenuk will supposedly try a 70-foot drop-in that looks absolutely vertical from below.

Seeing this place with my own eyes, I couldn’t get down it safely on a bike if you bubble-wrapped me and the bike into a giant ball and rolled it down. I’d still crater.

And just as I’m thinking that, someone does.

A medevac helicopter circles in toward the main bowl, disappears behind the ridge, and lands in a dust cloud as big as the cliff.

After 10 minutes, the helicopter fires back up, and the cloud obscures the cliff again.

This time, the diggers do not stop. Word arrives over the radio that it’s Kyle Strait — the circuit’s most experienced rider.

This year was Strait’s record 15th Rampage. He’s ridden every single year in the event’s history.

I had asked Berrelcloth if he could tell me who the rider was. Saying it clearly pained him: He enunciated Strait’s first and last name tersely, looking straight ahead.

Berrelcloth also said it’s confirmed that Strait lost consciousness but regained it before the helicopter lifted off. Later, I hear various tidbits down at the corral — the leading theory is he shorted a jump, caught his back wheel on the out ramp, and went over the bars. More than one person says they heard he “fell off a cliff.”

Either way, a paramedic tells me he can’t say more without Red Bull’s blessing, but he does say that Strait gave a thumbs-up after regaining consciousness. As of this afternoon, Strait was in the emergency room at St. George Regional Hospital. The emergency room couldn’t provide information beyond confirming his presence there as of this writing.

Berrelcloth’s contrition exemplifies the tension this event forces. Below all the rad attitudes, send-y vibes, shakas, and chill conversations, athletes are stressed.

If Strait can leave here in a helicopter, anybody can.

We continue up the course. The ramps only get steeper the higher we go. At halfway up the trail to the summit “fort” where riders start, a security guard stands in the trail.

I ask him, “Is your job to make sure nobody goes up here who’s not supposed to?”

He replies in the affirmative, then pauses, and glances above. “We don’t want to make the athletes any more nervous than they already are.”

The delicate balance riders have to strike up here becomes clearer with the altitude gained. Berrelcloth explains that bike wheels become sails during jumps. Crosswinds can blow riders anywhere and everywhere while they’re airborne.

Storm winds are forecasted to blow in tomorrow, competition day. They might start before the riders do. Or they might gust in during somebody’s run.

I stare up at Semenuk’s drop-in. If you dropped a knife that was the same size and weight of Semenuk and his bike, I figure the wind would affect it about that much. Berrelcloth says, rumor has it, he’ll caveman off the edge. (If you don’t know, that’s where you hang your bike over the lip by the handlebars and jump onto the seat from the platform.)

Berrelcloth spots Cam Zink working on his line, about 20 feet below us on another ridge.

“Hey Zink, how much did you have to brake up to that?” he asks.

Zink, helmeted, hands on handlebars, glances up at the 35-foot, 80-degree landing ramp.

“A f***-ton,” Zink says, before walking away in understandable preoccupation.

Then, a sparse but comprehensive cheer issues from the smattering of people standing on the mountain.

Suddenly, Semenuk nails his drop-in. Like a knife dropped, he quickly reaches terminal velocity and then disappears behind the ridge. He stalls at the lip of the next jump.

The cheers crescendo, peak, then fade. Berrrelcloth speaks up in the ensuing silence.

“Anybody think he made that look too easy?”

Red Bull has changed the Rampage start time due to expected wind. The new start time is 10:30 a.m. MDT. 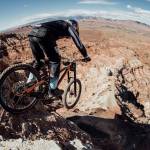 Unless you’ve seen Red Bull Rampage, you haven't seen anything like it. Tune in to catch the world’s steepest, airiest, raddest MTB freeride competition. Read more…